I am presently reading Advanced Baking and Pastry by Michel Suas. He makes mention of the desired dough temperature (DDT).

I like to bake by experience and employing my senses, but sometimes I need to “paInt by numbers” before I am able to develop the necessary skills.

...must be meaningful, but I wonder how much practical difference the size, shape, and material of the parts also contribute.

(Silly example to prove a silly point: Imagine a huge heavy metal beater and bowl that are cooled by liquid nitrogen; RPM would hardly matter at all.)

There would be the matter of metal shards all over like broken glass unless the bowl and beater/hook were aluminum, which doesn't get brittle like iron/steel.

I wonder whether the dough would get brash or stronger.

It would be fun to watch as long as it's your mixer in your kitchen, and not mine. :grin:

Well your example of liquid nitrogen being the cooling agent may be a little too far but in industrial bakeries a lot of the large horizontal type mixers are equipped with cooling jackets to regulate dough temps.  So not too crazy.

Not just a water jacket but chilled and the mixing chamber under vacum as per Chorleywood high speed tweedy mixers. Doesn't equate to better dough and bread though.

I played with this a few years ago, and here's what I found. I don't think in terms of numbers now, as they've become redundant to knowing what the mixer's doing with  different breads.

Thanks, Gary. Your information is along the lines of what I am looking for.

A few years back, I actually counted the rotations of the bowl at various speeds. Obsessive, I know... The RPM of the bowl is recorded to the left of the hour hand (number) on the clock. So, 12 equals 12 o’clock, etc.. And 2 o’clock equals 80 rotations. I feared vertigo, had I gone any higher <LOL> 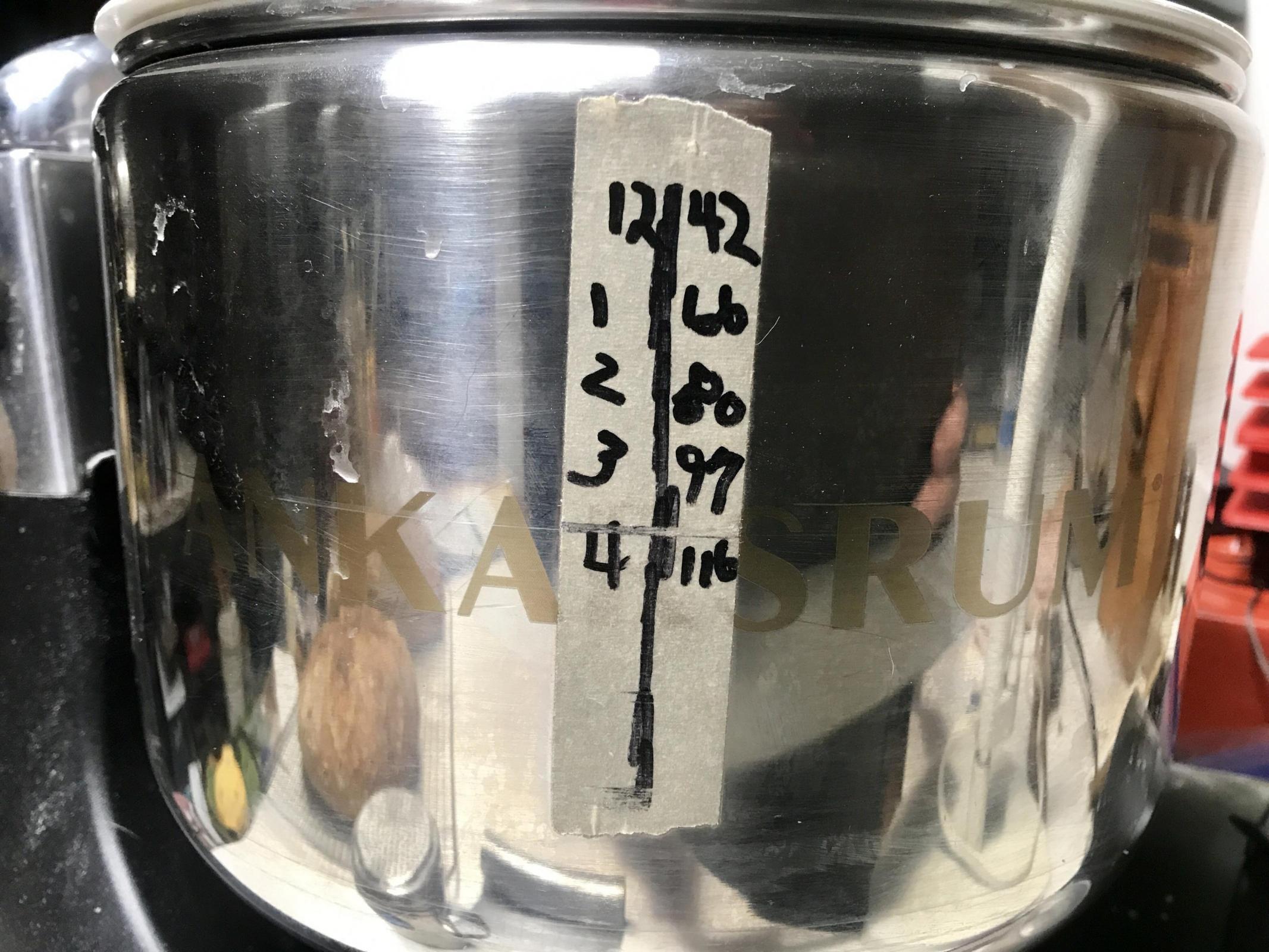 As you wrote in the linked post, I also think I am over mixing my dough. If you have time and are inclinded, I would appreciate your directions as to the settings required to mix Hamelman’s Five-Grain Levain. His directions are, “Add all ingredients to the mixing bowl. In a spiral mixer, mix on first speed for 3 minutes, adjusting the hydration as necessary. Mix on second speed for 3 to 3 1/2 minutes. The dough should have a moderate gluten development. Desire dough temperature 76°F”

Btw, isn’t it amazing how the Ankarsrum does not heat the dough much, even after long mixing times?

I appreciate your help.

Dan, as I understand it, spiral mixers (as opposed to any other type) traditionally have a low speed of 100rpm and a high speed of 200rpm, though this can vary by manufacturer.

Mixing times in Suas and Hamelman are based on these speeds.

However an Ankarsrum is not a spiral mixer, so even if you got the same rpm, you wouldn't get the same mixing effect - you would need much longer (2x or 3x ?)

The Ankarsrum doesn't heat the dough much, simply because because it's gluten development (with the roller) is very gentle (which is a nice way of saying poor!)

The Ankarsrum doesn't heat the dough much, simply because because it's[sic] gluten development (with the roller) is very gentle (which is a nice way of saying poor!)

My experience does not jibe with yours at all. The roller +  scraper provide a very complex kneading action. Comparing the DLX to a KA for a particular degree of development indicates that the DLX kneads to a given condition in about 20 or even 25% less time. Maybe that's just me and 8 years experience with my Assistent.

I know there are lots of happy Ank owners on here. I'm just speaking from my personal experience. I used to own one for about a year and could never get on with it.

Previously I had a Bosch Universal Plus, which I thought had a pretty good kneading action, but everyone spoke highly of the Ank and one came along at the right price and I thought I would give it a try. I thought the dough hook was good, but it worked in a very similar manner to the BUP and was no better, apart from the easier cleaning of the open bowl vs doughnut bowl. The roller was OK for initial mixing but poor for developing gluten. So off to Ebay it went!

If the principle of the Ankarsrum roller and scraper is so good, why has it never been scaled up into commercial sized models? After all, planetary and spiral mixers (as well as diving arm and fork) come in a wide range of sizes.

...that the mixer's action looked poor to you. "It doesn't look to me like it's working" is not the same as "It isn't working"; and the fact that it does work is not up for dispute - proof is abundant. Perhaps you had a defective example.

I've gone to classes at SFBI twice now and the first time I couldn't believe those mixers. My &*^%#$ KitchenAid eventually gets the job done but for some formulas it takes 10 - 20 minutes. All of my notes from the breads we made in class say, "Mix on low for 5 minutes, then high for 1 - 2." We saw dough go from weak to perfect in a matter of 15 seconds at the end of those mixes. Oh, and they go so slow in comparison to what I am familiar with as to be truly astonishing. Of course, I have no need (yet. Hopefully I will open a bakery when I retire) for a huge commercial mixer, so I limp along with the howling beast that drives my wife from the kitchen end of the house. BTW, does anyone have a quiet KitchenAid? I've decided the manufacturer simply doesn't care about gear noise. I assume their commercial mixers don't wake the dead.

... any commercial mixers. Originally they were part of a company that did make them, but that hasn't been the case for many years.

You should be able to ID the RPMs of commercial mixers by finding the spec sheets.  Like this one

Thanks Alan, it seems most spiral mixers are around 100 and 200 respectively. But the spiral mixer has a rotating hook and also a spinning bowl. My Ankarsrum has a rotating bowl with a station dough hook but also has the option to use the roller. When the roller is used it spins aroung the bowl and I think this changes the revolution senario.

I was a big fan of the dough hook, but I am beginning to get concerned that the large hook is tearing the gluten strands as the bowl spins to move the dough. Maybe it’s nothing, but I’m trying to figure this out.  Please Take a LOOK.

I am starting to consider that maybe I am over working the Five-Grain Levain.

On the video, it does seem like the dough is being stretched too much with the great possibility of the gluten being torn on just about every rotation.  I wonder if that would be the case with a greater volume of dough in the bowl.

As you probably know, I mix "everything" by hand with French Folds, but my upper limits of dough are about 2k, more typically 1.5k - dictated by "need" rather than weight/volume .  My 40 year old KA is broken out rarely - only for something like an enriched dough or the occasional ciabatta.

So when it comes to knowledge about home mechanical mixers, other than what I see on videos or read about here, I am an admitted know-nothing.

If you are concerned about over-mixing and willing to go the hand mixing route, you might want to give that a try.  It is pretty darned hard to over mix that way, and I've never seen my dough get the kind of "stretch" as what I see on the video.

Not working side-by-side with anybody on this stuff  I've never been able to compare my skill at gluten development with another.   And since I never look for a window pane, I just go by experience, and trust that I do it correctly.

I can perform 300 French Folds in a matter of mere minutes, with ~5 minute rest 1/2 way through, not much different timing than a mechanical mixer, and there is no machine clean-up - a selling point in my book ;-) .  Caveat is that a stiff dough with all of the soaker in at the outset, like the Five-Grain, will be more work by hand than a typical dough.  This dough is just way too stiff to attempt to hand mix and add the soaker in a subsequent step.

Dan as I mix everything by hand even up to 3kg of dough or more! Just to go the total opposite why don't you handmix the 5 Grain and see the difference and tend to agree with Alan?  Then you can try to emulate the feel of the dough you get hand-mixed with the Ankarsum. Not very scientific but might give you an indication of what the dough should feel like? Just a thought... Kat

I plan to do just that. I know the dough won’t be over mixed if a machine is not used. I also want to feel the progression of the dough development.

Most doughs are mixed by hand.

Alan, did you mix your FivexGrain Levain by hand? If so, how?

I plan to mix another batch in 1/2 hour.

After incorporating all ingredients - pinch and fold in the mixing bowl, there is a 20 minute "autolyse".  And then the French Folds.  For the first 50 or so FFs, the MO is using as much brute force as skill since the addition of the soaker at the outset makes for a very husky and resistant dough.  However, the latter part of the first set of FFs, and particularly after the 5 minute rest, the dough becomes significantly more malleable and compliant.

Here are my formula notes for this bread:

Thanks for the timely reply, Alan. I am headed to the kitchen now to start mixing the dough.

Here's my formula normalized for 1000g

Thanks, Alan. I’ll start with 98% water and adjust if necessary.

Historically, I’ve had a very wet dough. Sometimes I even added additional flour. All things seem to point to over worked dough. It will be exciting is the issue is solved.

Feedback needed - sourdough loaf
My Foolproof Step by Step Recipe
Large Bubbles, Just Underneath the Crust
Deflating on the scored side
What is a seed starter?
END_OF_DOCUMENT_TOKEN_TO_BE_REPLACED