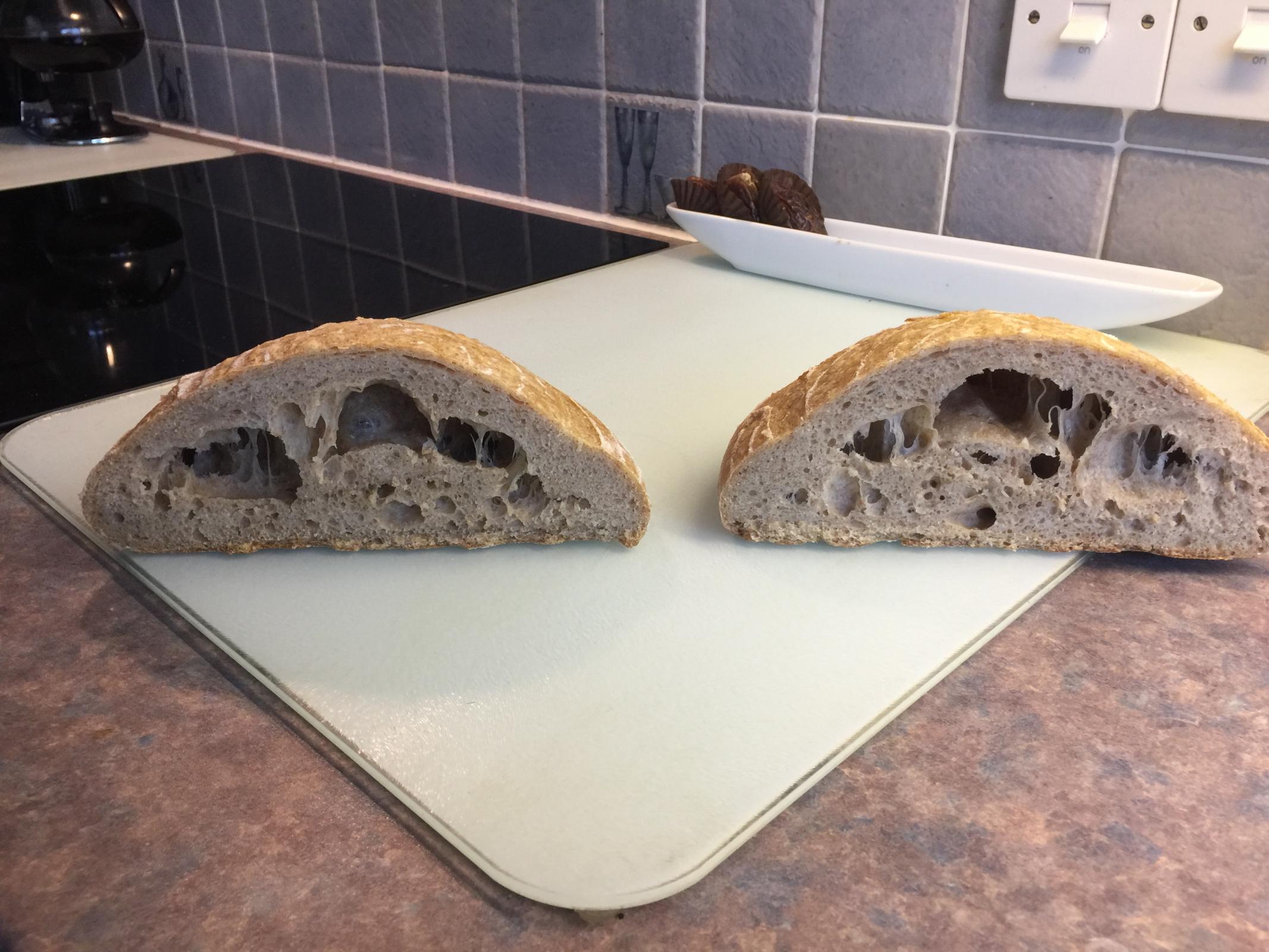 Ok, a bit of  a newbie when it comes to sourdough and the higher hydration levels. This was my first attempt.

Following the Sourdough School recipe book I started with the classic white loaf. I only have one round and one batard banneton so I made two loaves with exactly the same dough. I have posted the photos! It looks underbaked to me and felt gummy in the mouth. The birds had it all in the end!

The round boule I placed in a lodge pan for an hour + 5 minutes, as per the instructions and it came out very light in colour. The instructions were to preheat the oven and the lodge pan at 250c then lower the temperature to 180c when you put the dough in. My temperature probe said it got to 100c by the end of the cooking time.

The batard loaf I baked on a baking stone as I did not want a duplicate of the boule. I have fancy oven with steam addition which i set to high. I cooked with steam for 20 minutes turned the steam off and cooked for a further 20 minutes at 230c. Again the temperature inside reached 100c by the end of the cooking time.

I also suspect my starter or levain was not up to standard - perhaps i should shrug this off and try again and try and narrow down the causes!!

Any help would be greatly appreciated. 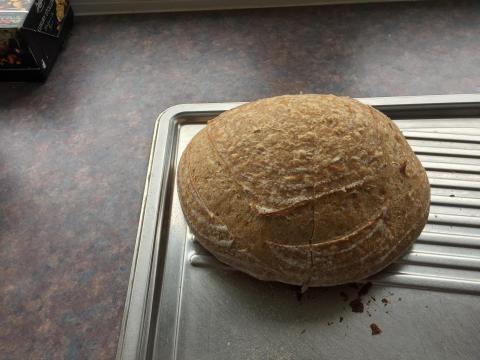 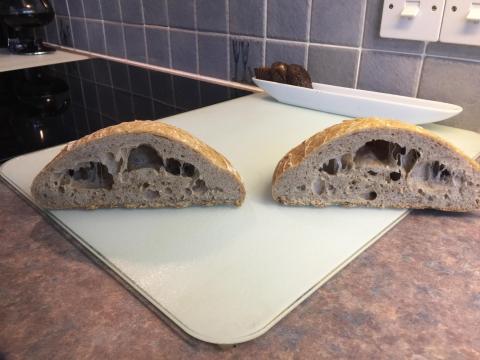 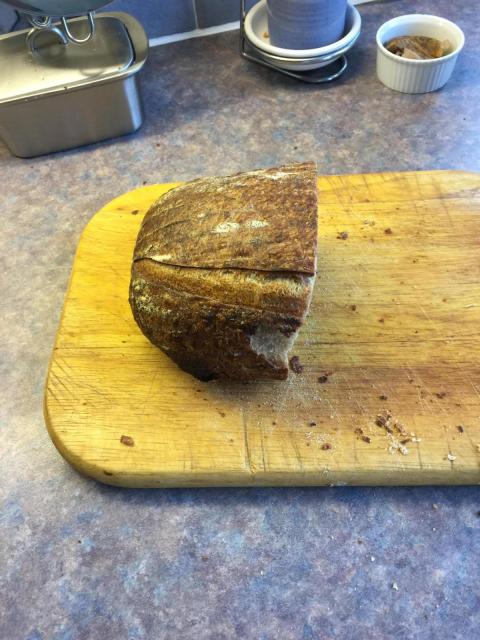 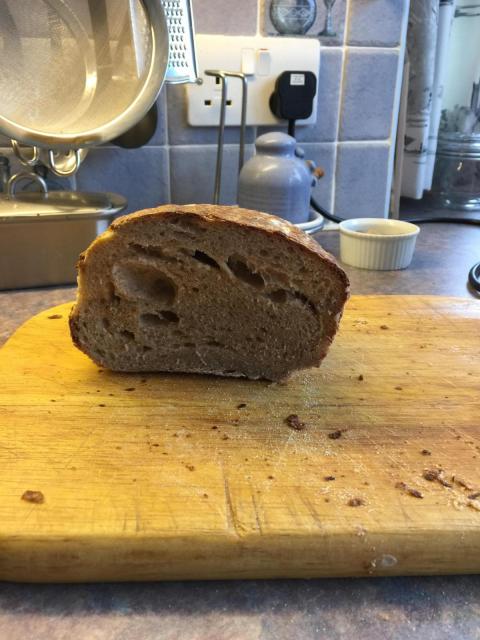 My first thought, based on my own experience, is about the gaping holes in your loaf. To me it looks like poor shaping. When I'm not very careful in my shaping, I get very large holes like that. I think I'm trapping air in the middle of the dough when I do my stretch and folds. When I'm more careful about shaping, I don't seem to have that problem. I'm still learning too but that's my guess. As far as the gumminess you described, I'm not sure.  It might be helpful if you list your ingredients and describe your method in greater detail.

and my guess would be that it has to do with some form of underfermentation and without knowing the exact procedure I would suggest:

Did you ambient or retard in the fridge?

That's my two pennies worth and keep going...

Classic signs of under fermentation either in the starter/levain or bulk ferment.

Looks like you had two problems which got mentioned in an earlier thread. Do not give up.

Grind some into bread crumbs and use them: about 10% of your flour weight. They'll add a depth of flavor that will amaze you!

It looks to me like the gluten network wasn’t strong enough to support the high hydration levels hence the inside of the loaves has collapsed.   How long did you autolyse and mix for before bulk fermentation?

looks to me like it was shaped before a proper degassing to pop the large bubbles with something sharp.  Too gentle!  :)

Large bubbles get bigger and can trick you into baking too soon as they (fake you out) make the dough look more risen than it is.  Don't be afraid to lay your whole hands on the dough (wet or dry floured) to feel the bubbles expanding underneath the dough checking for hollow areas and while at it, the tightness of the dough skin.  Train your hands with each loaf to test for density.  It's fun to do!  Check hot fresher loaves as well to feel for doneness but a little more gently and through pot holders or towel.

The batard looks like it could also use more degassing before shaping but could also use a longer final proof. It is out of focus and hidden in shadow but looks dense between the large bubbles esp. the lower half. The lower crust looks pale, hard to tell from the photo.  Perhaps the stone needs more preheating as well.  How does the bottom crust look?

It definitely helps to know what recipe and process you used. Looks like underfermentation. Perhaps the starter wasn’t active enough for your dough to rise? You can always test your starter after it becomes vigorous from the feeding by putting about 50g of it into a bowl of room temp water. If it floats, it’s active enough to ferment your bread. Hope that helps! Don’t give up!

It seem underfermented.. may I know the exact method you did after scaling the recipe, how long did it take for mixing, by hand or machine, how long for fermentation, how long for bench rest, did you know the shaping technique, how long the proofing after shaping.. after that then we can conclude which part you have to improve... by sharing the recipe you might help as well..

Without knowing the details of your bread's formula, and of your dough development strategy what I'm going to offer is merely a guess: a guess based primarily on your photographs, and your hint that you're unsure of how to handle higher hydration doughs.

First of all, I don't disagree with the majority opinion: insufficient fermentation. However, I think the major fault is poor gluten development.

The evidence: re your photographs: the final shape of your first picture shows clear evidence of a loaf that expanded horizontally pre-bake, and separation--the central lines of big holes in both loaves (slightly smaller in the batard cross-section). As I understand, you proofed the loaves in bannetons: one round, one batard shaped. The round loaf clearly expanded horizontally (and flattened} after being released from the restriction of the banneton shape. This is the first evidence of weak gluten development. More revealing is the line of large holes occupying the center and upward in both loaves. This is due to the gluten structure's weakness, i.e., the gluten network ruptured during oven-spring leaving large holes in both loaves. This is my best guess.

It's been a couple of years since I last posted on TFL. I had reached my bread-baking goals--largely due to the extraordinary help I received from other TFL bakers. During the years I was active herein I posted frequently. Most of my later posts argued my believe in consistency--in both ingredients, and techniques. I also became a strong believer in both rigorous gluten development, and long fermentations for lean doughs.

In context,  my wife and I are both bread bakers. We haven't bought a commercial loaf of bread for more than twenty years. She favors enriched doughs, and the bread machine. I bake the sourdoughs, ryes, foccocias, baguettes, chibatas, and the occasional  Challah. I rely on machine kneading and stretch-and-fold techniques for gluten development, and overnight fermentation at 54°F (wine cooler temp.) about 15 hours for all lean doughs I bake.

If your interested in learning more, respond to this post and I'll point you to earlier posts, and other TFL bakers I learned tons from.

Hi David, Thank you so much for the response...so detailed...thankyou!

With this loaf I did 6x stretch and fold over a three hour period, bench rest 20 mins and then shaped. my shaping isn't good but improving. I find the stickiness of the dough hard to master! The S&F are not really a problem for me...there are enough videos on youtube on this. I think what happened was that my starter was not up to the job...i have now rectified this.

I have just put on other cry for help...you will see my loaves are improving (despite 2 bakes between this one and the one today which i had to throw out).

I am ok at baking yeasted bread but it seems that sourdough challenges me....for now!

For me there seems to be so many variables but maybe I am just overthinking. How should the dough should feel and look when the bulk fermentation is over (I do this in a proofing box - Brod & Taylor at 27c or 80f) for 4 hours. Mine feels billowy (like they say) but my gut says it should be even more billowy and there are just a few air pockets on the sides of the bowl. I use a glass bowl so I can see there are tiny air bubble throughout the dough even though my last S&F was 30 mins before.

Once again many thanks. Hope to hear from you soon.

I support David G's reply, but the common theme in all of these responses is that your bread could have used more kneading and/or mixing of ingredients. I have seen pockets like that form when the ingredients are "thrown together" and not mixed or kneaded very thoroughly. This leaves poor gluten formation and the gas pockets tend to agglomerate together into a large pocket. Since this is a higher hydration recipe, you could have also performed a second light kneading ("stretch and fold") in which you deflate the air pockets.

Other secondary causes can include:

* Too much sugar (same as above, sugar is a cofactor of gas creation)

* Improper or "late" mixing of sugar and yeast into doughball. You need to make a proper starter and then gradually add the remainder of the flour and water to this, ensuring complete mixing. If the yeast and sugar are left in pockets of the overall dough mass, you will get these large pockets, even if you stretch and fold several times.

The easiest way to limit the variables at first, is to find a very good and very detailed recipe and follow it absolutely to the letter, doing every step exactly as the author did, including (as far as possible) using all the same kind of equipment they did. It's hard, because many of us are so interested in "what if I just changed this one thing, surely that wouldn't cause a problem" ?