I had posted in a thread earlier that I was on Day 7, but, according to my notes, I'm actually on Day 8.

It smells good, it tastes sour and just a teensy-bit sweet (I guess that's what might remain of the pineapple juice, although there is no smell of PJ). I'll check when I feed it tomorrow to see if it passes the float test.

So, on to the inevitable newbie question...now what?

Do I continue to discard/feed for a few more days so it can build strength/flavor? How best to build up enough to use in a recipe?

I know it should be fed and at its peak right before use, but this, however, is where I'm confused the most...if I were to pull a cup of starter to use in a recipe, do I feed the remaining with a half-cup of flour/water or a whole cup of flour/water? Do I immediately stick it in the fridge or do I let it feed on the counter and THEN put it in the fridge?

Thanks in advance for your help!

Is do a test bake. It looks good! Does it pass the float test?

I'll check when I feed it tomorrow morning...or should I wait until AFTER I feed it and it doubles?

...and it has peaked. If doubling is oeaking then do the test when doubled.

This will be a good indicator.

Your starter is peaking fast. Now in your description I see grams and tablespoons. Makes things slightly confusing but I think your feeds aren't big enough for a now active starter.

Try weighing everything now and get a good feed in to see how it reacts. Slowly does it but I think the next step is 1:2:2...

I was, for the most part, following the instructions in a YT vid by King's Roost where he used 3TB of flour and 2TB of water. After I read your reply, I weighed it out...3TB of GM WW weighed 26.9g and 2TB of water weighed the same (I know it the flour weight can vary a bit, though).

Anyway...so my feedings since I started discarding down to 75g of starter have been on the light side and, basically, this fast peaking is due to having more than double the amount of starter than what I'm feeding?

Makes sense...tomorrow, I'll follow your suggestion of 1:2:2 and see how it goes. 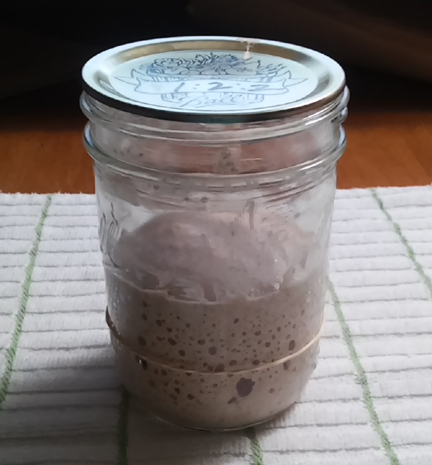 Within a more normal time range. A starter that is fed daily and is always in an active state should be doubling in about 6 hours. If kept warm enough that is. So a few points...

Sorry, I overlooked your question about the smell...it smells sour (but pleasantly so) and where I could still smell the WW pretty strongly before, that's just about gone with only a slightly sweet-ish, sour smell remaining.

JUST TO BE CLEAR...I should feed twice a day, each time using 25g starter, 50g flour, and 50g water until the beastie is ready, right?

Once it "is" ready to use, I'm going to need to talk to you about the best way to actually USE it (offshoot/levain) and how to MAINTAIN it in the fridge (I won't be making SD on a daily basis).

Thanks for all your help!

LOL! Gonna have to come up with a name for mine...it all depends on how he (she?) behaves as it matures.

For now twice a day, once in the morning and once in the evening, after it has peaked. If you're an occasional baker then it all depends on what's best for you and how you wish to use it. You can keep a little in the fridge. When it comes to baking just take a little off and build an off shoot starter with it to the correct specs. When your starter runs low just take it out, give it some TLC and then back into the fridge it goes. Till the next time.

If your starter is now passing the float test then you can think of a trial recipe.

Well, my first sourdough is in the proofing baskets.

I decided to go with something simple for my first one, so I followed the "1:2:3" method (I built an offshoot starter and worked it up to the required amount).

Mixed the starter and water, added the flour, autolysed for 30 minutes, incorporated the salt, did 4 sets of S&F in the bowl every 30 minutes (seemed to be enough...it was holding its shape pretty well), let it rest for 30 more, dumped it on the counter, split it in half, shaped it into two boules (making sure I had good tension), floured the basket liners, and placed the dough into the baskets.

As you can see, they're small (325g each), there's a big fat bubble on the left side of the one on the left, and I've done the poke test...oven is preheating.

Going to spritz them with water and cover them with the lid of my graniteware roasting pan for the 1st 10 - 15 minutes and then remove. 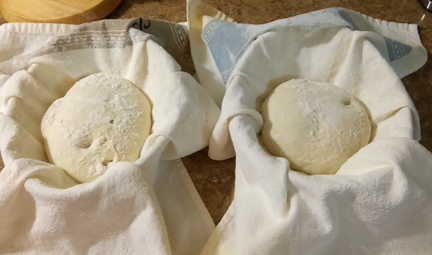 I don't know how they're going to turn out in the end, but the dough itself smells amazing!

They're done...JUST took them out of the oven. 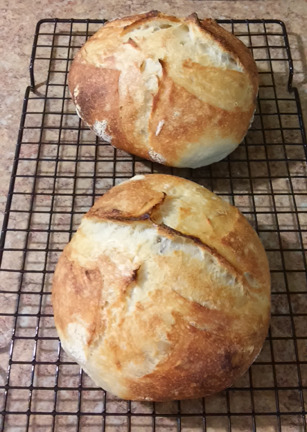 One thing right off the bat...this is the most "splitting" I've been able to get so far. Looks like they got a decent spring (remember, they're small), and they smell WONDERFUL!

I can hardly wait for them to cool so I can slice into one of them!

been watching this thread and so glad for you!   Can you see me jumping up and down?  :)

I love sniffing dough and starters, and baking bread, and grain, and slices of bread,  mmmm.

Success. Can't wait for the crumb shot and taste report.

All worth while in the end and I admire your patience.

Forgive my wee-hours-of-the-morning pic quality, but here's the crumb of the smaller of the two loaves... 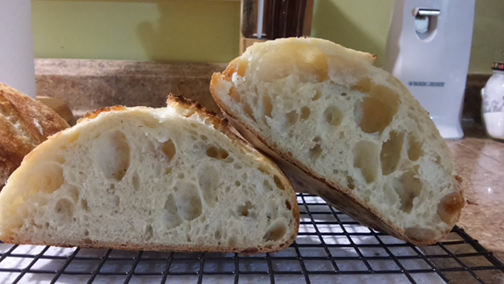 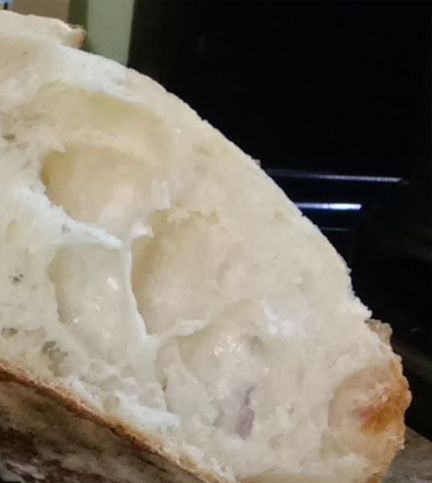 I think the holes are a bit TOO big, but there doesn't seem to be any "compaction" (for want of a better word) at the bottom, so I got spring all the way through.

The crust on the top and sides is thin and crispy, but the bottom crust is thick and hard, so I'm going to have to figure out what can be done about that (oven temp? rack position?).

I haven't tasted it this morning, but last night the flavor was VERY good (except for that bottom crust), but it didn't have much of a sour taste at all (I guess that's because my starter is still a wee babe and will improve with time).

All in all, as a first run, I think it was a success...just have to figure out that whole over-done/hard-bottom crust issue.

Well, I neglected to mention the obvious...I actually made bread that was raised NOT by commercial yeast, but by the result of mixing flour, water, and time!

I feel so connected to my ancestors right now! :)

Lovely loaves. Just a tweak here and there till you get what you're looking for in a loaf but they are a success.

Enjoy the feeling of all that patience paying off.

I whacked off a piece a few minutes ago...I think it needed a bit more salt, but it tastes pretty good!