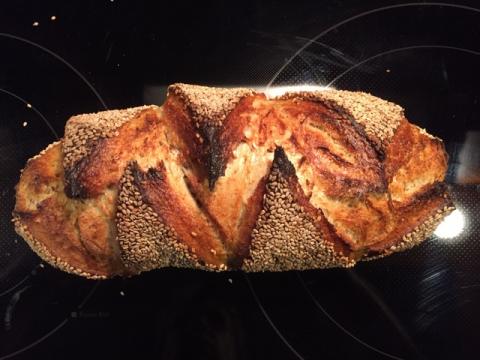 Another in Abel's ongoing postings of embarrassingly wonderful bakes:  His Ziggy stoneground loaf from mid-January caught my fancy, and I was sure that when the time was appropriate, I'd try my hand at his scoring technique here.  Well, the time is appropriate.  With neighbors coming over for some wine, bread and cheese this afternoon, I figured, why not now?

This is my version of the Hamelman 125% liquid levain hydration semolina loaf.  I use a rye levain instead and apply a boatload of sesame seeds in the way that I learned from David Snyder's post from oh, so long ago.  Baguettes were scored with my curved razor lame.  Ziggy was scored with my ceramic knife - another new tool for my baking toolbox, and another new scoring technique for my baking pleasure.

25% Bread Flour, 60% Durum, and 15% Rye (all in the levain).  At an overall hydration of 67%, this bread is a little hard to French Fold after a 20 minute "autolyse" with the levain included, fighting me along the way.

Once the bulk rise begins, it become very manageable and extensible.  Two hours with folds at 40, 80 & 100 minutes in my warmer than most kitchen.  Then the standard routine, overnight nap in the refrigerator, divide and shape in the morning, couched and then shoved back in to retard for a few hours more.  Probably in the vicinity of about 15 hours total retard. I dunno, didn't pay too much attention to that small detail.

460dF oven for 13 minutes with mega steam, and then rotate and 13 minutes more with 2 minutes of venting.

I likely scored Ziggy a little deep, but really can't complain about the eye-candy effect of it at all. 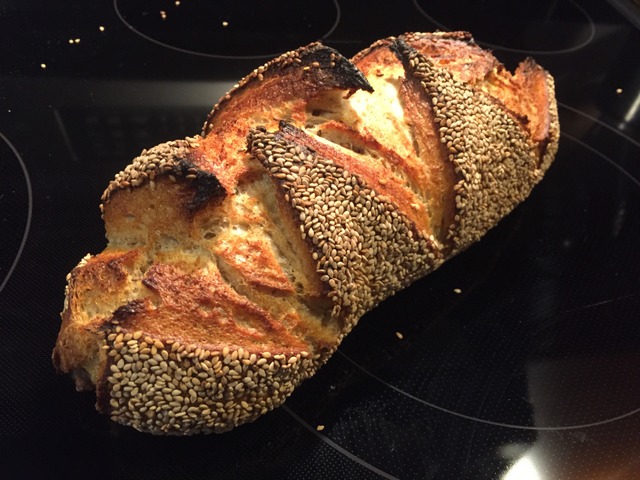 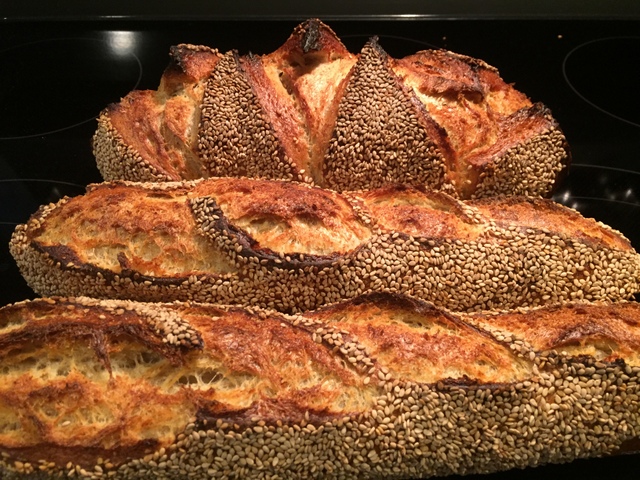 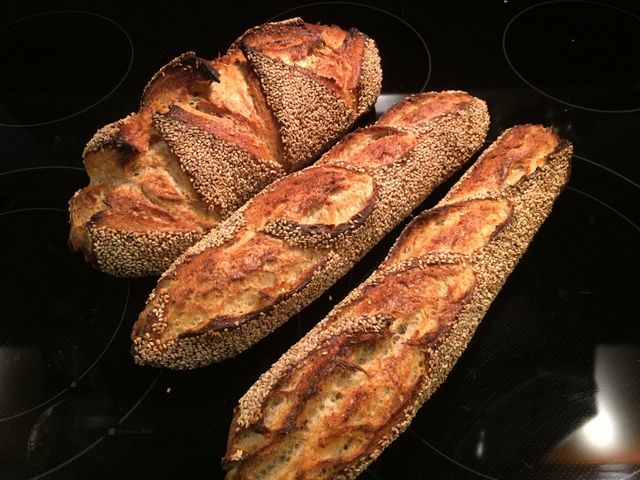 Very lovely indeed! From crust, colour to covered in sesame seeds. Everything I like about a bread.

and away from their pantry and bread box, I quickly learned to love the "Italian Bread" at the local Bronx Italian bakeries - a sesame semolina.  To this day my favorite sandwiches still involve that bread.  Not planning on that changing anytime soon either!

Amazing ears! That loaf is one for the record!

on getting the best use out of it.  I can use it as a training tool for my lazy and reluctant Venus Fly Traps, or attach a pole to it and make myself a backscratcher.

I had been keeping Abel's post up since he published it in January.  It was actually pretty easy to do, just needed a really sharp straight flat blade and wiped the surface with a thin coating of olive oil to ward off any tearing or ripping of the dough.  Shape a batard for yourself, give it a taut skin, and have a go at it.

If those ears were any bigger they would flap themselves like Dumbo and fly away and meet me in NY!  How did the crumb come out?

For a semolina, which seems to typically not open up much, the crumb is "okay" but no one would call it open around these parts!  Clearly the oven spring/explosion on this one indicates that the yeasts were determined to make their mark as they went into their final death spiral.

As usual your loaf looks great!!!  What was the make of the knife you used??

Here is the link https://www.bedbathandbeyond.com/store/product/gibson-4-piece-ceramic-blade-cutlery-set-with-sheaths/1043117987?Keyword=ceramic%20knives

When we travel for a few months away and stay at VRBO's or overseas apartments, we bring a few knives and other small light kitchen "essentials" with us.  Because we never know what we'll find at these places.  This past summer I picked these up for $20 at BB&B.  They are indeed sharp as slicing blades.  Their weakness is that the can eventually chip and can't easily be sharpened.  But for 20 bucks, it was an easy choice and has paid off handsomely so far.

Thanks, the other Alan G...

In my mind you will always be Baguette Man but after seeing this beautiful bread you are obviously also Batard Man...but I wouldn't call you that in a public forum.  As always, great bread Alan!

sometime get mad at me, throw a seeded rye bread at my head and call me a "dirty little batard", but I have the feeling that I didn't hear her right.  Good thing that she always came home from the bakery with the bread sliced, so that by the time it began to sail through the air, it would split into slices before making contact with my skull.  I used to think that the bread I then had to pick up came off the floor with specks of black crud, but thinking back to those wondrous days, it must have been the caraway...

I've gone through my batard phase as well maybe two years back, but these days I'm just as likely to do a mix because, well because I can.  The nice thing about baking at home is that we do whatever the heck we want, unless we're baking special orders for friends and family or my wife threatens to throw a batard at my head (we don't slice them in advance anymore).  Ouch.

Welcome back to the forum, and it is clear as day that you haven't missed a beat, so while you where on hiatus you must have been baking all along and depriving us here at TFL of seeing your goods.