Another notch up the baguette ladder of perfection

Another notch up the baguette ladder of perfection 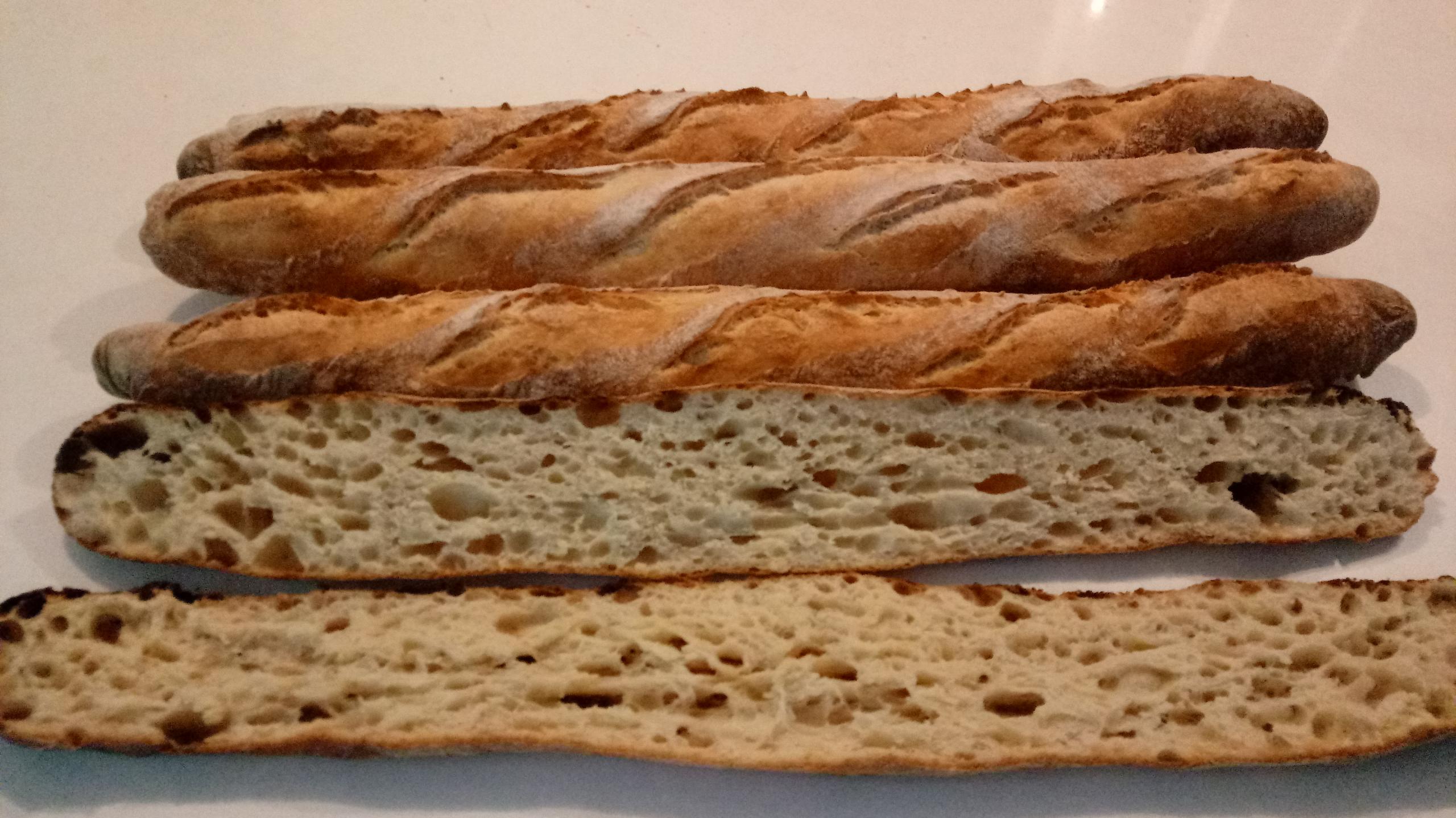 I'd call this an improvement. A few change ups on oven management and a few other things resulted in a much better Browning situation to what I usually see. In this case I plugged the oven vent for about 3 minutes and also gave these loaves a pre-mist at final proof. Being totally intrigued I watched the entire 20 minute bake and enjoyed the show ;) as a side note the cut open loaf went in about 10 minutes after the first 3 and was visibly flatter and thus number 4 served as today's crumb model.

And so continues the quest to make this gas oven comply ... 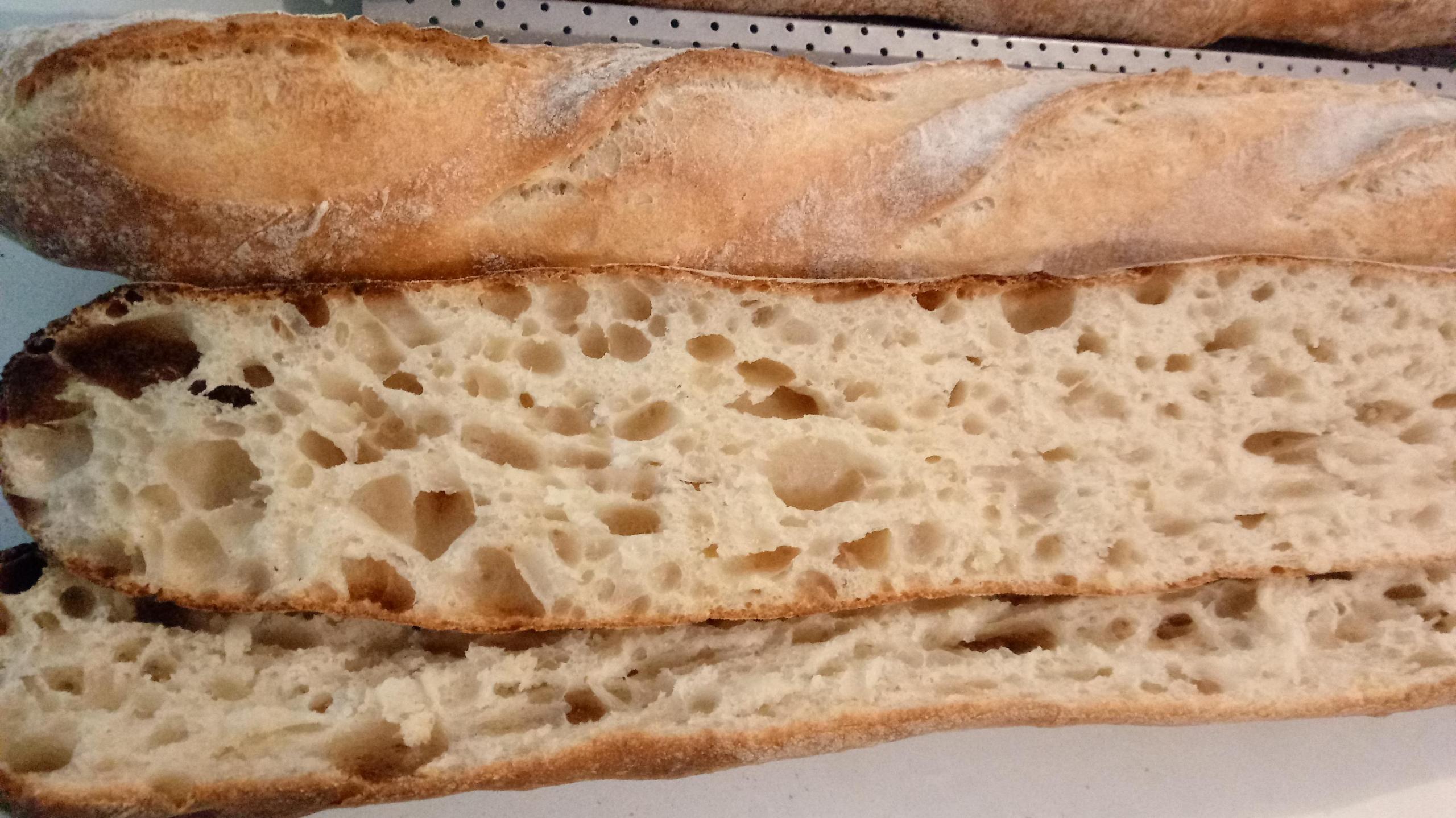 All the more impressive by having been baked in a gas oven. Congratulations!

kendalm
May 7 2017 - 1:32pm
Sticking with scoring all loaves on the upward angle 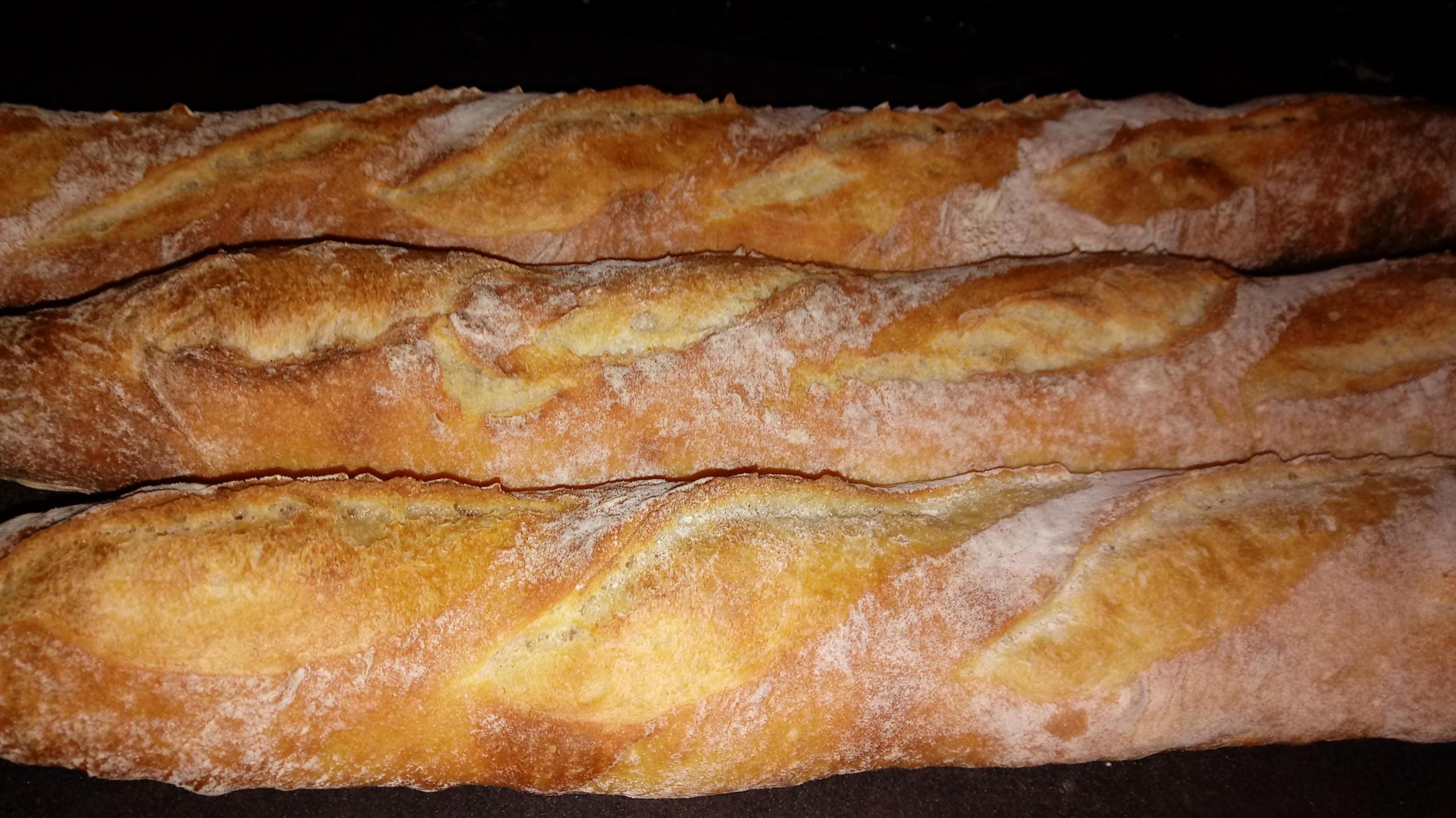 Sung to the tune of "It's getting better all the time".  Definitely an improvement in depth of coloration and scoring.  Now all you need is a kitchen expansion to add an electric oven!

I came across an old thread on TFL which I think would interest you quite a bit.  A comparison of French and North American flours.

What she says in there is EXACTLY how I would describe the differences between the two flours. When I started using French flour I was in search of both flavor and aroma. As mentioned before you can sniff out a French loaf and the case I site is trader Joe's 'mini baguettes' which they don't sell any more but, my wife discovered them some time ago. One day she said look 'baked and flash frozen in france'. I still remember taking a skeptical woff and suddenly turning to her and saying 'these are real'.

As for the description of gluten development - this again is exactly how I describe American flour - ages to develop and then upon development, her strong and tough. It never get the same smooth glisten as French flour. The first time I mixed a batch of French flour I was shocked by how fast it developed - 2....maaaaybe 3 minutes on high mix compared to 6 minutes plus with KA. Then in the end you find the flavor is kind of null, if anything gluey smelling. Ahe also mentions guistos which I've used and its close but also quite a stretch (no pun intended) from the real thing.

Up to here all this shaping effort is really secondary for me as what I want is something that tastes like the first baguette I ate as a teen in antibes - it was a magical moment. For you alan, I known you like your Pillsbury but you ought to hit up lepicerie and try some Moulin d'auguste t55 or t65 - the while neighborhood would likely flock your pad !

and there is an obvious difference in the crust.  Nice next step!

Oh - and I always wonder whether one of the biggest differences in the flour sold commercially in North America (Canada and the USA) vs ones in Europe might be that the North American ones are all "enriched" with various vitamins and minerals by law, and the European flours that I have seen haven't been.  The additional iron, folate, thiamin, and whatever else is decreed must be added will have an impact on the how the flour absorbs water, how it reacts to yeast, and the enzyme activity.  Just something that I wonder about...

Looking forward to seeing your next step up on the ladder!

I'm not really sure is additives are a big contributor but I do know that French mills grind more bran into the flour generally speaking. I watched video on guisto's efforts to mimic French flour after spending years with a well known French baker (I forget who) and there was a lot of back and forth working on blends to get the appropriate color and other qualities. This is an American mill going to extensive efforts to satisfy a very picky boulanger. It just so happens that only last week I used their flour and results were not bad flavor however again the final mix to 6.5 minutes. I should video both flours for the forum especially the final mix - the way I describe the French flour is the final is where the magic happens - if I do a long autolyse say 2 hours I have seen it come together in 1 minute flat. The. Quicker the better and less flavor loss.