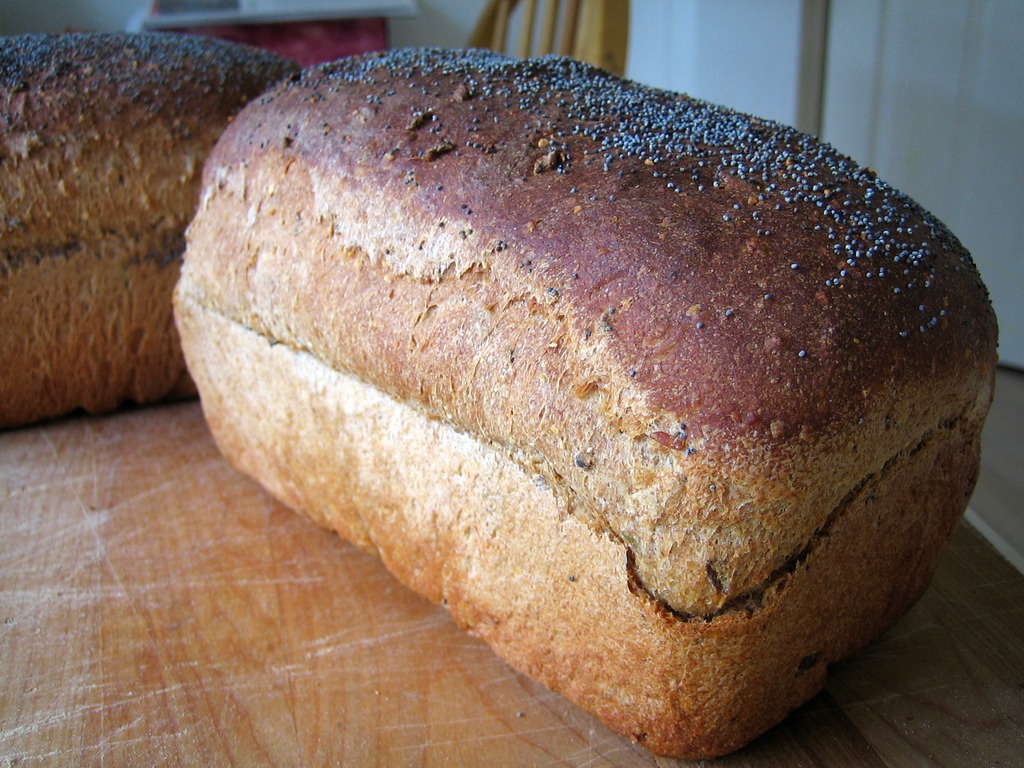 I still recall hearing the buzz around my hometown, Forestville, California, about the new cafe that had opened there when I was growing up, Brother Juniper's.

Inevitably people's comments sounded something like "My sandwich/chili/coleslaw was excellent, but did you try the bread? It was incredible!" The bread people were talking about was Struan Bread, Peter Reinhart's attempt to recreate a Scottish harvest bread he had read about known as Struan Micheil.

The original Struan was baked on Michaelmas (Spetember 29) and would contain small amounts of all of the grains being harvested that season. So, if you've never tried it, this is definitely the time of year to try baking Struan.

In his latest book, Peter Reinhart's Whole Grain Bread, Peter offers an updated whole wheat, multigrain version of Struan Bread (a previous version of Struan is available here). I baked a double batch of it this evening using a mixture of cooked brown and wild rice as well as uncooked coarse ground corn meal as the grains. Handily, along with volume measurements his book includes weights (in both metric and imperial) as well as the baker's percentages for all recipes. I'm posting just volume. If you want the weights or Peter's more in-depth instructions, get the book!

DAY ONE Soaker: Mix all of the ingredients ingredients to make a thick porridge-like dough. Cover and leave at room temperature for 12 to 24 hours.

Biga: Mix all of the ingredients to form a ball of dough. Knead for a minute or two by hand until all flour is fully hydrated. Let the dough rest for 5 minutes, then knead again for 1 minute. Place the dough in a bowl, cover, and refrigerate overnight. 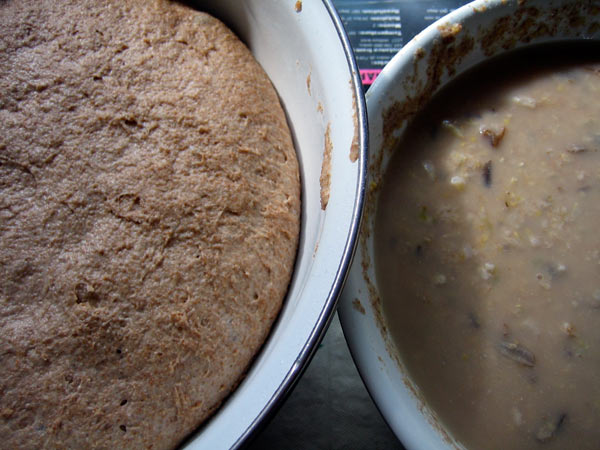 Remove the biga from the refrigerator an hour or two before preparing the final dough. Chop or tear the biga into smaller pieces and combine with the soaker. Add the remaining ingredients and mix well. Knead by hand or machine for roughly 5 minutes until all the ingredients are evenly distributed. Add additional flour or water to achieve the proper consistency (a slightly sticky dough that'll hold its shape). I added as much as a cup of extra flour because the grains I added were precooked and did not absorb a great deal of moisture. 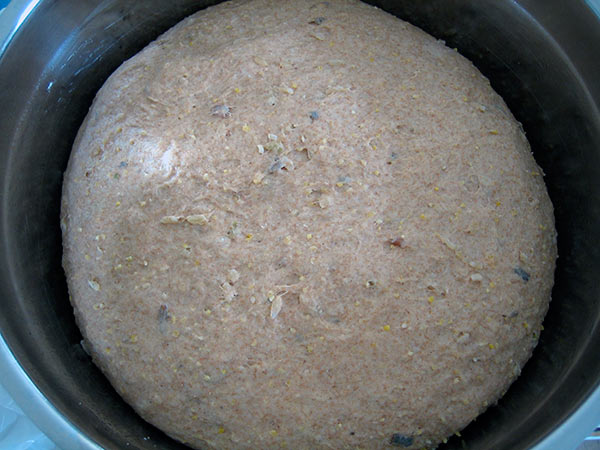 Place the dough in a greased bowl and allow to rise until 1 1/2 times its size, roughly 45 minutes to an hour.

Shape the dough and place in greased pans for the final rise. If you want poppy seeds on top, spritz the loaf with water and sprinkle seeds before the final rise. 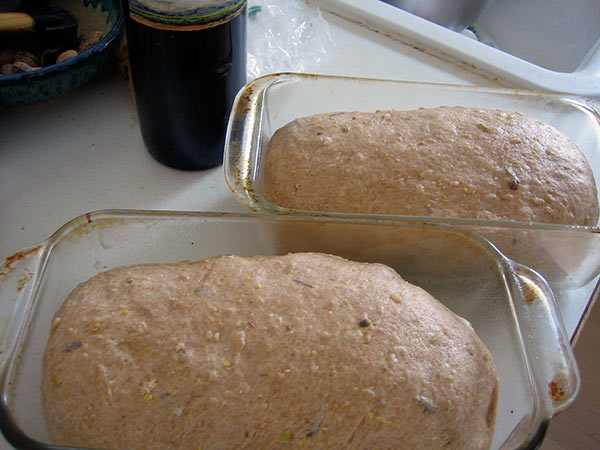 Pre-heat the oven to 425 while the loaves are rising. 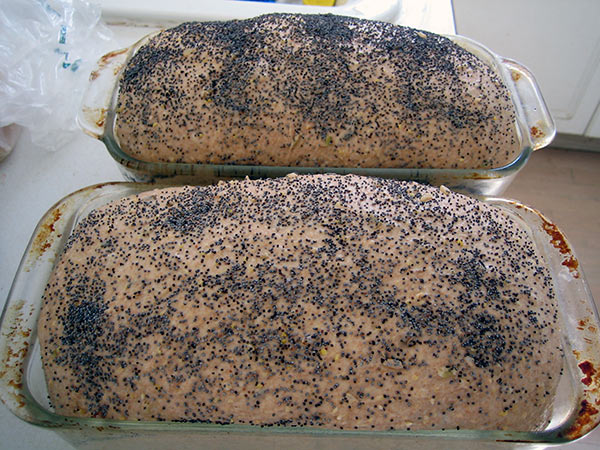 To bake, place the loaf in the preheated oven. After 5 minutes, reduce the temperature to 350 and bake for 20 minutes. Rotate the loaf 180 degrees and bake about 20 to 30 minutes until the loaf is deep brown, makes a hollow sound when tapped on, and when the internal temperature reads at least 195 degrees. Remove the bread from the oven and allow to cool for at least one hour. 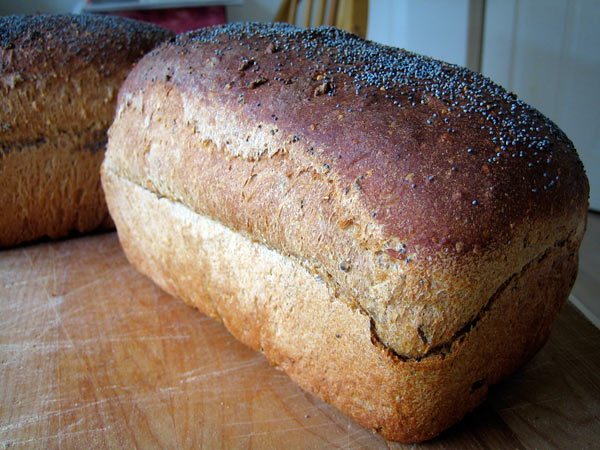 This is beautiful, a very come-hither multigrain. Thanks for posting the recipe.

That looks amazing!  Is that the 100% WW or the transitional?

I made my version of the older struan recipe (adapted from BBA) this weekend.  I was going to try out some new formulas from the WG book but decided since I was using the mud oven to stick to some more brainless formulas as the the wood-firing causes too many variables for a first try at a new recipe :)

I did test the WG struan over the winter, and made a loaf for my Ps (on the atkins diet, sigh) this summer, though it didn't look as beautiful as yours!  It was a very complex flavor, almost a meal in itself!

Is that the 100% WW or the transitional?

I used all whole wheat in the biga and initial dough, but when it came to adding extra flour I used all-purpose. So it is probably 60 or 70 percent whole wheat.

Floyd, I LOVE poppy seeds, but I thought YOU could never look another one in the eye.  What gives?

I've been begging him to make me straun bread again for years :)

This looks wonderful and I would like to try it, but could you give the ingredients *by weight* ? Thanks.

We love the Struan from BBA..do you guys have a preference? I have never bothered to add the 1/4 cup (? small amount, I forget exactly) of brown rice from the BBA formula. Do you think the all whole wheat and 1 1/3 cup of assorted grains is one for the "must make list"? It certainly looks like it!! Tell us about the taste and texture, please?

Personally, I'm attached to the classic Struan recipe. Because I worked in the bakery and helped bake and slice thousands of loaves of it, it will always be special for me.

The taste and texture of this were good; it definitely was Struan still. I used regular milk instead of buttermilk, which I don't think made it turn out quite as good as it is with buttermilk. It also seems to me that this Struan isn't as sweet as the classic Struan. I know some folks find that Struan too sweet, but to me that is part of the package. I've been eating this with honey butter and then it tastes very much like Struan.

The grains aren't essential, but it isn't hard to wrangle up a few grains to use either. Even if you don't have the time to make rice, soak some polenta and oats to give it a bit of texture and variety.

I'm a whole grain lover, and this is the loaf!  It's got a beautiful rise, tons of flavour, toastability, sweetness, saltiness, tearable-just-stuff-it-straight-in-taste.

I doubled the recipe, and the only thing I would change - sometimes - is that I wouldn't double the amount of loose seeds/grains.  You know the saying "It's like there's a party in my mouth and everyone's invited!"  The party feels like it's out of hand!  Although I'm anxious to see how much MORE rise I'll get if I leave out some of the weight!

I'm trying the multigrain struan for the first time. So far so good (still on day one). I have a question about Reinhart's epoxy method though: Why is there yeast in the biga? Yes, I know, bigas traditionally have yeast. But in this formula, the biga is immediately placed in the fridge, and when it's taken out the next day the leavening work is done by a heavy second dose of yeast. What role is the yeasted biga serving in this case? (Compared to a biga without yeast)

promote flavor and acidity, even in the refrigerator.  Reinhart is unusual in refrigerating his bigas.  I’m guessing it’s because the bigas are large relative to the final dough, and he doesn’t want the enzymes getting out of control.

This is Peters recipe as printed above with help from the book on a few things. I'm really happy this turned out so well. I haven't had a long history of whole wheat breads that look great. This smells very good. I used wild rice as one of the grains along with steel cut oats, millet, course corn meal and ground flax seed. I made a larger soaker and cooked the hard stuff so I ended up adding almost 2 extra cups of flour to get the dough so I could work it sticky. The finished dough was a little over 1200g. As Floyd mentioned above, it was baked to 195+ which took about 1 hour at 350. One other thing worth noting is I used Buckwheat Honey. It has a very deep and rich flavor I'm hoping will come through.

Thanks for posting this recipe Floyd and the picture of the finished bread. I'm glad I bought the book as PR does add some nice details which help personalize the process and of course the weights are huge for me.

I now have a photo editor for all future projects. My sometimes helper and daughter has an eye for composition and will be shaping my image. (Valentines flower)

May we see the innards after you slice it?
Susan from San Diego

How did you get such good oven spring? How come no slash?

I have been wanting to make this one, I might try it this weekend.

How did you get such good oven spring?

Nothing tricky, I just got the timing right.

How come no slash?

Because we never used to slash it at the bakery.

You know, I've seen so many loaves on this site with such incredible oven spring.  I never achieve this result (even by accident)!  Floyd, I notice that you talk about timing.  I assume that you meant that you placed the loaves in the oven at precisely the best point during the final fermentation.  Is that what you meant?

Gorgeous and can't wait to try it!

I just set up to make this.  It was not clear to me whether the weight of the grains was with or without the water used to cook or soak them.  Can anyone clarify?  My soaker, using wheat berries so that the cooked berries came out to the weight in the formula, looked much more liquid-like than porridge-like.

This is my first post on the fresh loaf!

I recently checked out the whole grain book from my local library and gave this bread a try today. I'm very pleased with the end result, nice light fluffy texture. I had a slight problem where the center sort of sunk just a little while it was baking. I'm not sure what would cause that?

This is my first ever 100% whole grain. I've done several 50/50 loaves that were really good tasting, but I'm super excited about learning to do whole grains for the health benefits.

I would upload a picture but I'm not sure how to do it. Lol