Challenges and Success from my UK baking

Challenges and Success from my UK baking 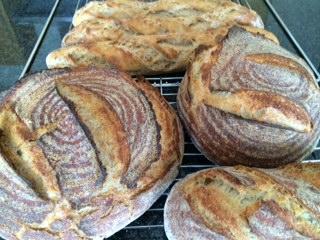 Hello everyone:  I have been off-the-grid for some time while I was traveling, as we don't have the best internet access when we are in the UK.  I will have to catch up on everyone's bread posts while I was away.

My visit got off to a rough start when I saw that my starter that I left in the UK for a couple of months (carried over from California several years ago), had gone off, for the most part.  I have never had this happen before.  I had several different jars of starter and most were bad with strange mold.  The one that survived was pure AP flour. I find that the white flour starter lasts much better for long periods than the mix of ww, rye and white that I usually keep as well.  I always have several starters  on hand for this reason.  I slowly built up the AP starter into several different containers and starting my UK baking after the second day of feeding.  Unfortunately, I got sick right after I arrived in the UK and spent the vast majority of the trip resting.  About the only thing I did do was bake as I had to stay in. Unfortunately, when I wasn't feeling well a few batches of dough were over-proofed and had to be tossed.

I baked quite a bit for family and friends, and made David's San Joaquin baguettes twice and they turned out well. 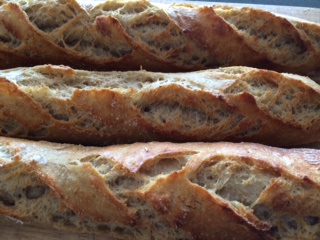 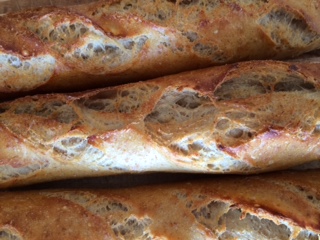 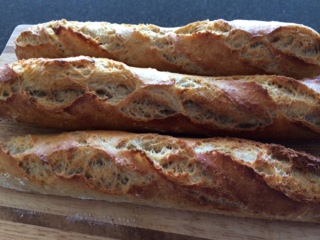 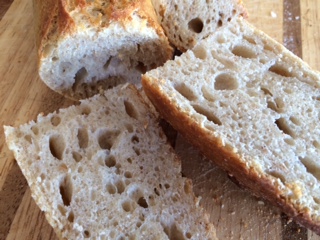 I made my classic sourdough loaf a number of times, in both boule and batard form. 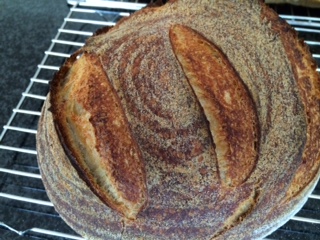 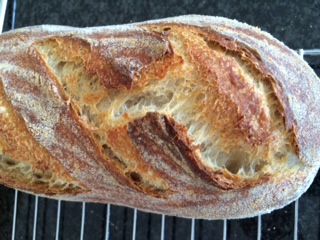 I gave most of the bread away, as well as making sure my husband had plenty of fresh bread! 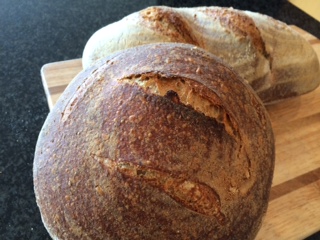 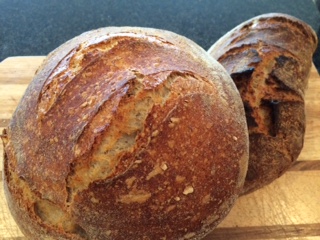 We just got back last night, so I have to get my starter going here back in California and get back to baking.  Look forward to catching up on everyone's bakes over the next few days.  Best,  Phyllis

They look amazing.  I'd love to learn how you were able to achieve that crust.  And did you do anything unique with the scoring of the dough?  The blooms are so unusual.  I'm intrigued, oh yes I am.

Alan:  The baguettes did turn out well.  I've included the link to David's wonderful recipe below.  For the scoring, I just used a razor blade and did four slashes and made sure that they were not consecutive, but overlapped slightly (I learned this from another TFLer, dabrownman.) and that they were clearly slashed open.  I did use boiling water in a tray at the bottom of the oven for the steam to make sure they were really crusty.  I think the higher hydration in the dough causes the blooms to really open up. Hope you enjoy making these baguettes.  Best,  Phyllis

I've been baking them, as well as a lot of other baguettes SJSD offshoots and otherwise, for over a year now, and posting my baguette journey here, mostly in my own blog, these past few months.  But as of yet I've not seen a crust with your type of scoring here, not by David, myself nor anyone else.  And I'd be surprised if you don't notice the difference between what you produced in these photos and most any other baguettes posted here.  My curiosity is yet to be quenched!

Alan:  I just looked at your last post about the baguettes, and I thought they looked great.  You are much too hard on yourself.  I have been making David's baguettes for a couple of years, and I would have to say that these were my best.  I am trying to think what I did differently....I did use a mix of bread and AP flours because that's what I had on hand.  I think I did my best shaping job because it helps to practice...I actually folded the ends in before the final shaping and that may have helped the bloom. in scoring, I probably did a no-no, in that I did the quick slashes, but went back over them to make sure that they had opened up properly. I also "cheated" by using a baguette baking rack (three at a time) for both the final proof and baking.  I also made them in England, and the water may be a bit different, as well as the flour. That's all I can think of.  I think I will get a new batch going today.  Will let you know!  All the best and I will keep up with your blog.  Phyllis

Great looking collection of bread Phyllis.  Sorry to hear you were under the weather for part of your trip but looks like you recovered enough to turn out some winners.

I am almost back to 100% now.  I did enjoy the baking while I was over, and I believe the family and friends liked it too.  I've got starter ready to go today.....Best,  Phyllis