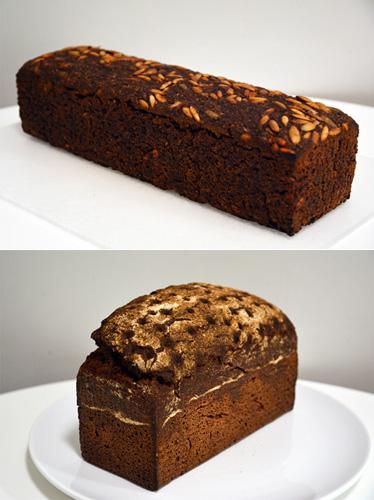 Hi everybody, especially rye bread enthusiasts...  Just wanted to post some things that I have been working on: 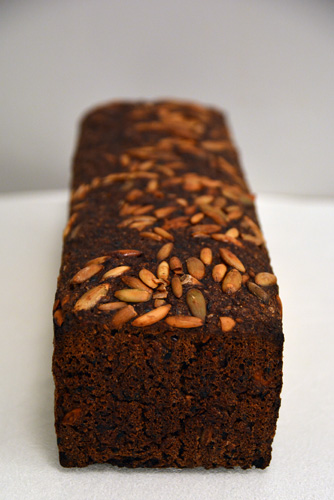 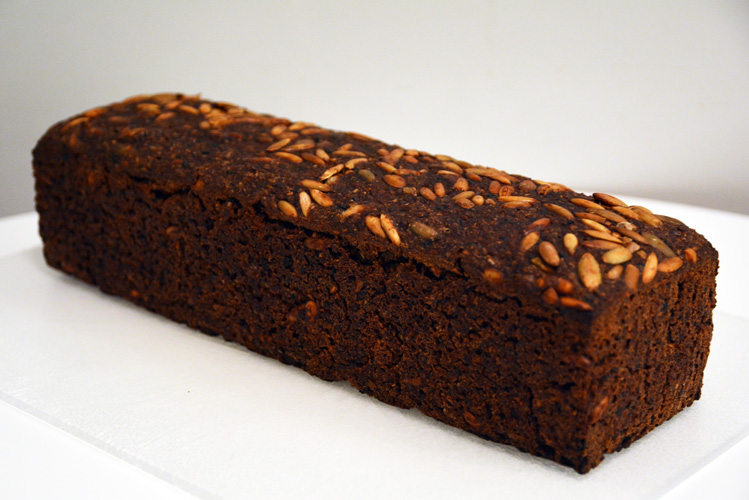 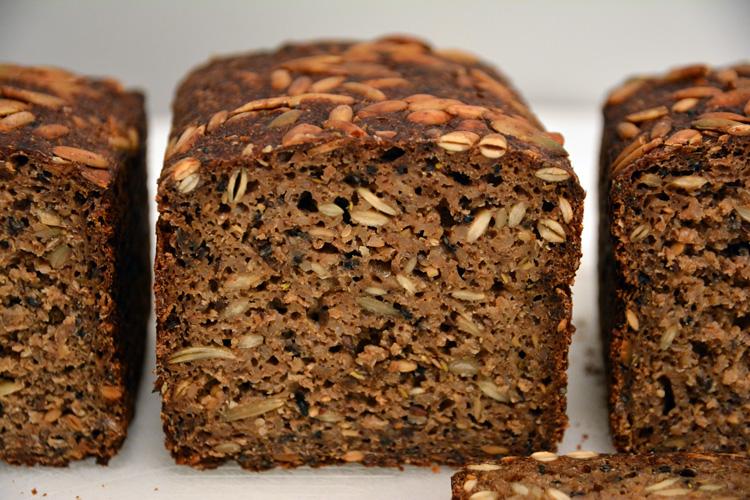 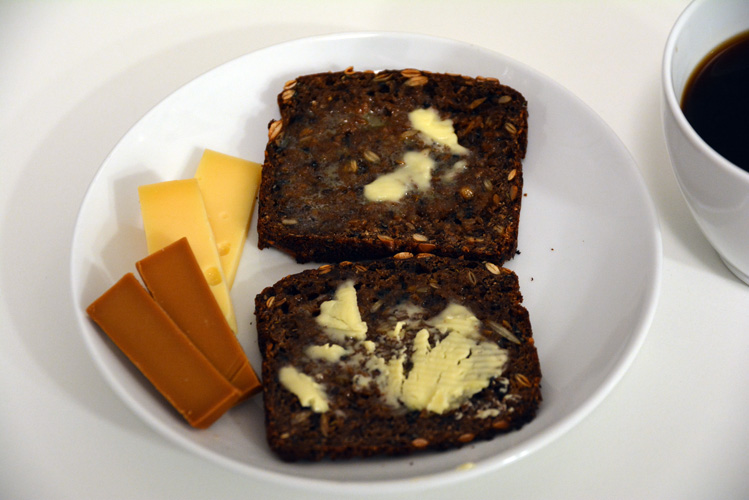 This one was inspired by this video with Paul Hollywood of the Karaway Bakery in London: http://www.youtube.com/watch?v=2az4i_XP4Uc

and these blog posts: http://flourandleaven.wordpress.com/2013/05/02/lithuanian-scalded-rye/

Here is a photo of the nice side of the loaf.  I think it could have been proofed a little longer...  I will cut into it tomorrow to see what it looks like.  From the good side, it looks pretty good... 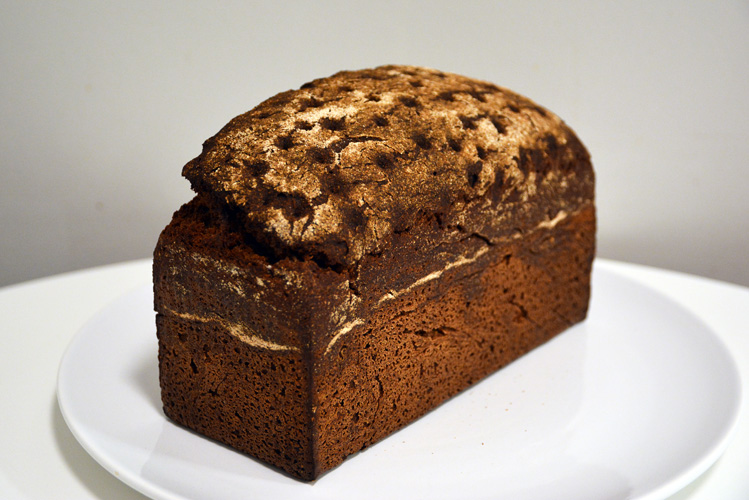 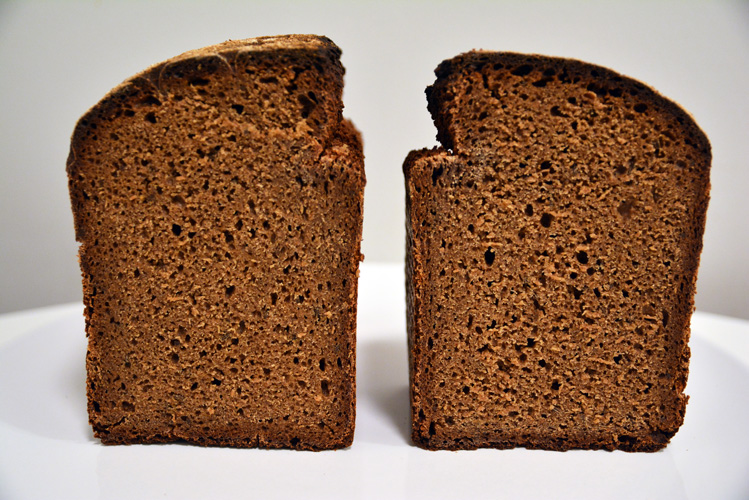 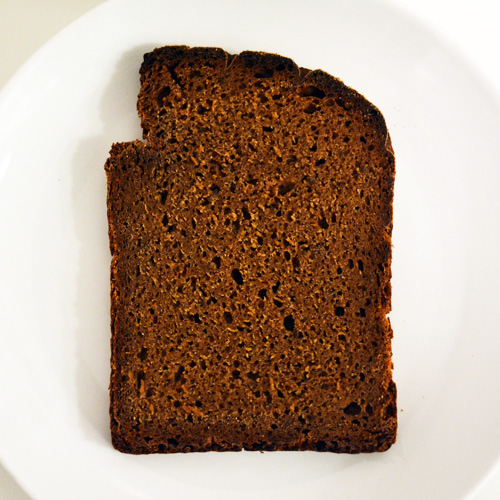 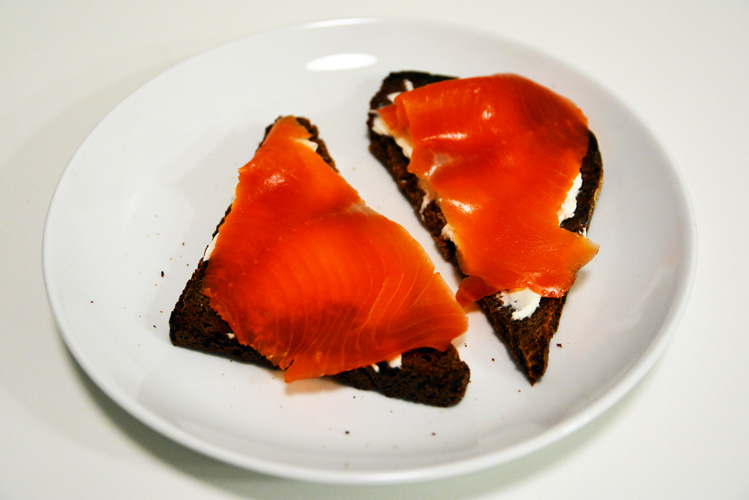 Until the next loaf...

Excellent loaves of some of my favourite types of breads. Nicely done.  May I ask what those light brown coloured cheese slices you have there by the lighter Swiss/Gruyere?  If they are even cheese...

Thanks!  The light brown cheese is "gjetost" which is a Norwegian goat cheese that I actually learned to eat on a trip to Iceland...  I've always seen it at our local market but had no idea what it was...  It is actually made with caremelised goat milk...  If you can find it where you are, it's worth a try.  It's like cheese candy...

These loaves look really nice.  I have been experimenting with similar types of loaves and am enjoying baking them.  Mind sharing how you have been baking them?  Temps and times?  That is the one piece that I am still toying around with….

Hi Tim,
I'm with Janet, very curious about the bake profile.
Very beautiful loaves, and thanks for the links.
:^) breadsong

Thanks.  Just cut it open, took some photos and had breakfast...  It's not bad, but I'm going to give some of it to my Lithuanian friend to see what she thinks...  I think there could have been more caraway seeds, but I ran out so I used what was left...  I'll post my process when I'm up to it.  It's pretty involved...

I watched the video links and I am comfortable with the process as that is how I make a lot of my rye breads - I follow Andy's method as outlined for his Borodinsky - the piece I am most interested in is  baking times and temps.  His are loooong and I am trying to find a way to shorted them with my home oven that produces a crumb that is cooked all the way t through and doesn't gum up the knife when cut into….I have a method that works - almost - so am looking for how others achieve their results.

Both loaves were also baked on the 2nd to bottom rack with a baking stone.  Both loaves were fully cooled, then wrapped in a towel for 24 hours before slicing...  Also, I made sure that my internal temp was around 205F to 210F and that the weight loss was at least 15% after baking from the final dough weight.

I think the resting period is very important.  In my experience, after 24hrs, it's sliceable but your knife will get a little gummy.  After 48 hours, slicing is easier.  The Danish rye slices easier after being wrapped in plastic wrap and refrigerated overnight.  I use a very sharp chef's knife to slice.  Don't bother with a serrated bread knife...

Love these loaves especially with all the hearty add ins.  Well done and

I backed up the page and copied my reply before it tried to disappear again,  then edited the single title line.  It happened when I didn't fill in the "Subject" box.  If you're careful you can back up to it, it might not be lost.

The ryes look great!  You sure that isn't one hunk of a brownie?  Yum!

I can assure you that none of them are brownies...  There are only 3 slices of the Danish rye bread left...  I'll have to make some more...

Some nice looking loaves! I'm on the hunt for the sort of bread tins that you have, but having trouble finding some. Did you order them online?

If I may, though, a slight critique -- aimed not at you, but at the Karaway bakery -- I'm Lithuanian and have been living in Lithuania all my life and you would never find the sort of bread that this bakery calls "Lithuanian" rye. I have never ever even seen or heard of such a thing as molasses (blackstrap or any other sort) being put in bread, because, frankly, there is no molasses in Lithuania -- nobody sells it, nobody uses it (I know for a fact that it is not used in bread). Also, barley malt would only be used to brew beer, the malt that gets put in rye bread is always a rye malt -- usually roasted rye malt with no enzyme activity, though occasionally you may come across russian style red rye malt.

As far as your critique, the Karaway Bakery is using rye malt, and rye malt syrup in their bread according to YouTube video.  As you can guess, I am not Lithuanian, or Russian, so it's difficult for me to find information about these bread as much of the writing on these types of bread are not in English.

Regarding the rye malt syrup, in Andrew Whitley's book Bread Matters, for his Borodinsky bread recipe, he mentions substituting "suslo" the rye malt syrup with a mix of blackstrap molasses and barley malt, both of which I have easier access to.

If you could point me to more information regarding Lithuanian breads, that would be great as I have only found a few sources in English, none of which are extensive...  Thanks.

Hi Tim,
Became of a rye malt syrup awhile ago - here's a link, in case this product is of interest to you for your bread-making:
http://www.northernbrewer.com/shop/northern-brewer-rye-malt-syrup.html

Thanks.  I saw that link yesterday.  I may get around to ordering some shortly.  Or, I'm going to check out some brewing supply shops in Brooklyn to see what I can find.

I didn't do it!  Promise...  Hopefully this will be resolved soon...

and got the rest of the post!  It was hidden!  ...interesting   (wonder how that happens?)  (are we hijacking this post?)

Varda, have you been passed the "magic wand?"

that I haven't made 100% rye bread for a while. Thanks for reminding me what matters in the kitchen, Tim!:)

I love those breads, they look amazing. Lithuanian scalded rye is a beast that I haven't tamed yet. I prepared it several times, but so far I always ended up with a crumbly crumb, that is not surprising. Very tasty, but I'd like some more structure.

Thanks Nico!  I've been playing around with high percentage rye breads lately with a few spelt brioches thrown in there just to have some variety and practice...

I'm happy that they turned out, especially the Lithuanian one as I'm only making guesses as to the process and recipe from what I can piece together on the internet.  My Lithuanian friend said it was "perfect" so I guess I can start refining this recipe...

As for structure, I did use 5% AP flour to make a liquid levain for the rye scald.  I was reading on the internet and found this link: http://stason.org/TULARC/food/sourdough-recipes/211-Notes-on-Russian-Sourdough-Bread.html#.Uq4acfaH9q4

There it says that borodinsky can be 85% Rye/15% Wheat flour.  That should help with the structure a bit...

Those types of ryes are my favorites. What does the Lithuanian rye taste like?  I know borodinsky, but that scald has a malt emphasis. There is a sweet and sour east European rye I've been trying to recreate without success.

Hey, your loaves look really great. I am making Danish rye for a while and I still get very moist inside of the bread, so I would like to ask for advice. What are in your opinion and experience the most important things to do to get as dry inside as possible?

Also, do you soak seeds overnight before putting them into a dough? When i do that  i get a little extra water in dough and and it seems that it makes my loaf more creamy and moist, but i kind of think that they taste better after soaking.