I recently made the pain de Campagne recipe from the book "52 Loaves" and while it turned out perfectly edible, and respectably tasty, it was lacking in a couple of ways.  One, no holey crumb.  Two, only so-so oven spring.  Three, (and much more bothersome to me), the flavor was good but not great.  Flavor is the thing I pursue with bread.  Unlike Mr. Alexander, though, I have no wonderful memory of a specific artisan bread to compare my efforts to.  There are no artisan bakeries in my area.  But I've had better flavor from sourdough english muffins where the starter and part of the flour ferment overnight, and they're mixed up with the othe ingredients and let rest for only 45 minutes before baking (it was a very basic recipe with flour/water/starter/salt, so the flavor wasn't coming from other added ingredients).

This is the recipe:

Here's what I did: the night before baking, I mixed built up the levain. Next morning, I weighed and added the  other ingredients to make the dough.  Autolyse 25 minutes, as per the recipe.  Then I kneaded, although I can't say the dough ever got "smooth".  I hate working with high hydration dough.  I fermented it at room temp. for about 2 1/2 hours.  This was a bit of a departure from the recipe, which says 4-5 hours.  But it also (in the book, but not the online recipe) says that the dough will have risen in that time by about half.  And mine had risen by half in the 2.5 hours.

So I formed a boule and let it rise another 2 hours or so in a colander.  Did periodic poke tests, and when the indentation left by my finger didn't spring back, I took the boule out, slashed it, and put it in the oven on a pizza stone.  Then remembered that steam was supposed to be involved.  Ran and got an aluminum roaster pan, spritzed it with water inside, and put it over the boule.

I didn't follow the baking time/temp instructions exactly. I can't afford to blow up my oven, so decided not to risk heating it to 500, the max. temp on the dial.  So I set it at 475 or a little lower.  My oven runs hot anyway.  I don't like an extremely brown crust, so I didn't let it get dark brown before turning the heat down, and I didn't let it heat to an internal temp of 210, but 203 or so instead.  Then I didn't let it sit in the oven for 15 minutes after the oven was turned off.  I don't think those things affected the openess of the crumb, because the crumb would have already been set in stone (so to speak) by that time.

I do suspect I didn't handle the dough gently enough during shaping, which may have affected the crumb.  I'm sure that forgetting to preheat a skillet for steam affected oven spring.  Would not having let the first fermentation go on as long as recommended have affected the flavor?  I have a deathly fear of overproofing.   I'm still mastering figuring out when my sourdoughs have proofed sufficiently, which I also think affected the oven spring.

So, I'd like your collected wisdom - do my conclusions sound right?  Is there anything else I've missed?  How can I get the elusive flavor, or am I expecting too much?

I blogged about this boule here (but with more humor and less exhaustive detail), and my review of the book is here.

I did some math assuming (always a bad idea) that your levain is 100% hydration. If this is true your overall hydration is about 67% which isn't all that high. I believe you crumb wasn't as open as you seem to have desired for two reasons. First it sounds as if you did not develop the gluten enough based on your description of the mix. If you mix by hand I suggest you use stretch and folds and be sure you develop the gluten properly so the loaf can open as much as possible. I'd try this first and if you desire a more open crumb increase the hydration incrementally until you are happy. I'd jump to 72% myself thy adjust from there. Don't fear the hydration as stretch and folds make it easy to develop.

As for flavor it seems you cut back a large portion of time which is where flavor develops. Maybe you cut the instant yeast completely and it will follow the formulas times more closely and develop more complex flavors.  Or increasing the salt will slow fermentation and bring out more flavor. the salt is at 2% and maybe going up to 2.5 % would help.  Doing both will deffinately allow for more flavor to ddevelop

About the salt - yes, I can probably increase salt that I used, which has almost nothing to do with the salt by %.  I forgot to mention that I have no digital scale - and my scale is not accurate for small amounts in grams because it only has grams in increments of 25.  So I wanted to try the recipe, but had to completely guess on salt, and by the taste, I'd say I undersalted a little.

I probably won't increase hydration until I've tried to fiddle with other factors, due to the fact that I'm not joking when I say I hate working with high hydration dough.  This was already higher hydration than I prefer, so raising it more seems about as attractive an option as pulling my toenails out.  And well, open crumb isn't something I usually care about.  But from what the book said, the ideal for this loaf has a more open crumb, and if it's supposed to have a more open crumb, then something wasn't right in my preparation of the bread.

And yes, my levain is roughly 100% hydration.

I would be interested to know exactly what type of instant yeast you added.  In the formula you listed you wrote, "instant yeast (also called bread machine, fast-acting, or Rapid-Rise yeast)."  This would not be my pick for a dough of this weight that is supposed to ferment to 4-5 hours.  There are some types of instant yeast which are stronger than others and act more rapidly.  This could account for the very fast rise in the bulk fermentation.  I believe Fleischmann's has these different degrees (Active, Rapid Rise/Bread Machine).  Perhaps you could try the Active variety or even a 1/4 tsp of fresh cake yeast?  I might just skip the added yeast altogether.  This would definitely add time to the bulk fermentation and alter the flavor.

I second the sentiments on the kneading and salt.

Not sure exactly what type of instant yeast it is- the kind you buy in bulk at Sam's Club, I think it is Fleishman's.  The bit about "also called" in the recipe is just there because I copy and pasted the ingredient list from the recipe on William Alexander's website.

I really only put the instant yeast in because the recipe called for it and it was the first time I made that recipe.  I generally bake my sourdough breads without any added commercial yeast.  I try to follow recipes by the letter when I make them the first time. 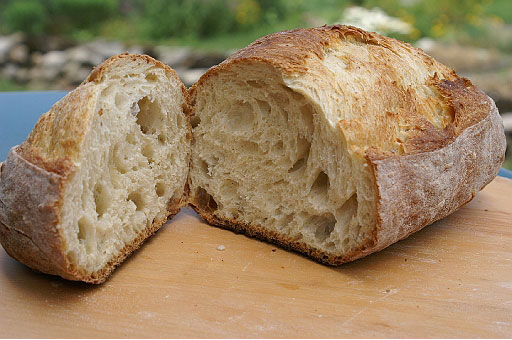 First of all, Amanda, thanks for your kind reviw of my book and for trying my peasant bread recipe. Sorry your first attempt didn't meet your expectations, but it did, after all, take a year for me to get it right. As to what "went wrong" with your loaf, I agree with many of the thoughtful comments made by other posters, but let me add my own.

It is challenging to get an open crumb in a loaf like this, as you know from having read the book. Since completing 52 Loaves I've started making two batards from the recipe instead of one boule. The higher crust-to-crumb ration not only yields a far more open crust (see accompanying photo), it also improves the flavor.  I agree with the posters who say you rushed things a bit. If the dough is rising too fast, put it into a cooler place - even the fridge for an hour, rather than reduce the fermentation time. That's where all the flavor is coming from. There is so little commercial yeast in this recipe that over-fermenting is rarely a problem. The lack of flavor may also be attributable in part to an immature starter. I find it improves with age, hitting its stride after a couple of months.

You are quite correct in your own analysis that the lack of steam might've been a factor. Steam is really important to oven spring, as it prevents the crust from forming too early and restricting the oven spring. Finally, if I could convince you of just one thing, it would be to not fear a dark crust. The compounds formed by the browning of the crust contribute to the flavor -- and let the temperature go to 210, or least 208. But do try again, perhaps with a couple of batards next time, and let us know how you make out.

William - Thank you for the tips.  I thought it unlikely that I would be able to get the open crumb right off the bat, but I was hoping.  Did you have to put the picture up?  That's just showing off. :) Seriously, though, it actually is helpful to see exactly what could be expected from that particular recipe.

I don't know about the dark crust thing, though.  I just don't like the taste of a dark crust.  If I do batards instead of a boule, maybe I'll try doing one darker and one lighter, and compare.

I've got a nice long free day tomorrow, so I think I'm going to try again, incorporating the tips from this thread, and see how it goes.

I was in France over the holidays and bought a pain de campagne that looked a lot like yours.  The bake was a bit bolder but yours looks really good - hope it tasted as good as the one I got!

Tried the recipe again - I did use more salt, remembered the steam, and made sure the dough got the entire four hours and some of the first rise period.  I also did bake it for longer, so got a deeper brown crust.

Oven spring was greatly improved, as was flavor.  Crumb only marginally more open, but with the improved flavor, I'm not really concerned much about crumb.

If I do it again, I'll try stretch and fold and less kneading.  Kneading the sticky dough just makes me cranky, and it isn't worth it.

Oh, but the crust was pretty tough.  You should have seen the faces my kids made biting into it.  Is the crust supposed to be so hard?

They did both ask for more, though. :)