We made these the same way as always but these I would have to call a failure compared to: 15% Whole Wheat Bagels with YW and SD Desem Combo Starter   Use that post for the method with the changes listed below. 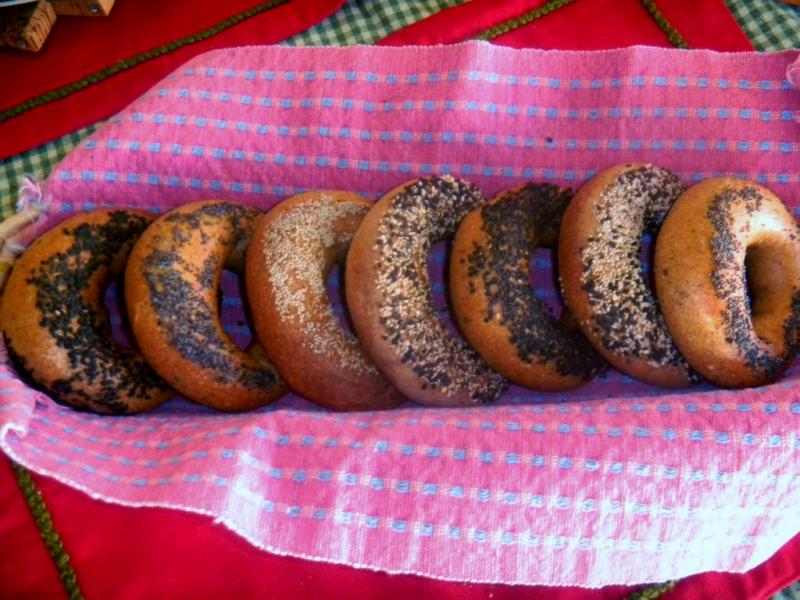 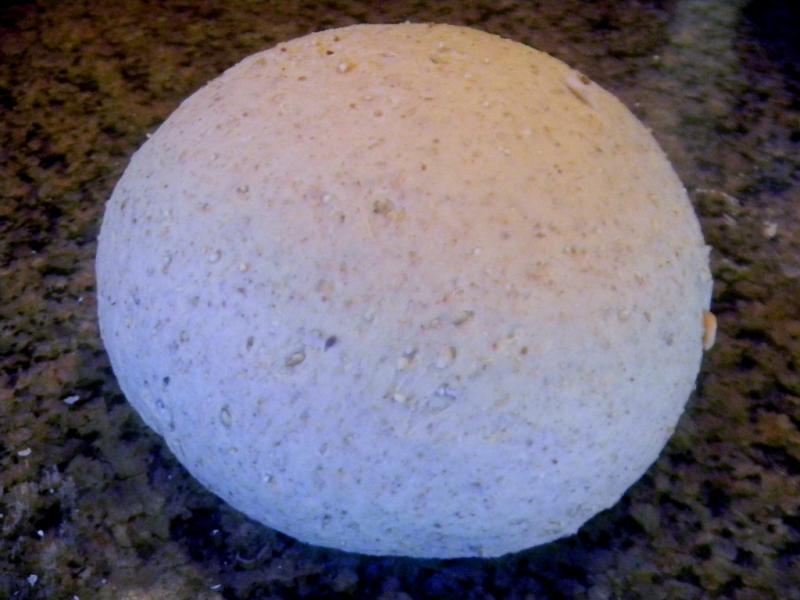 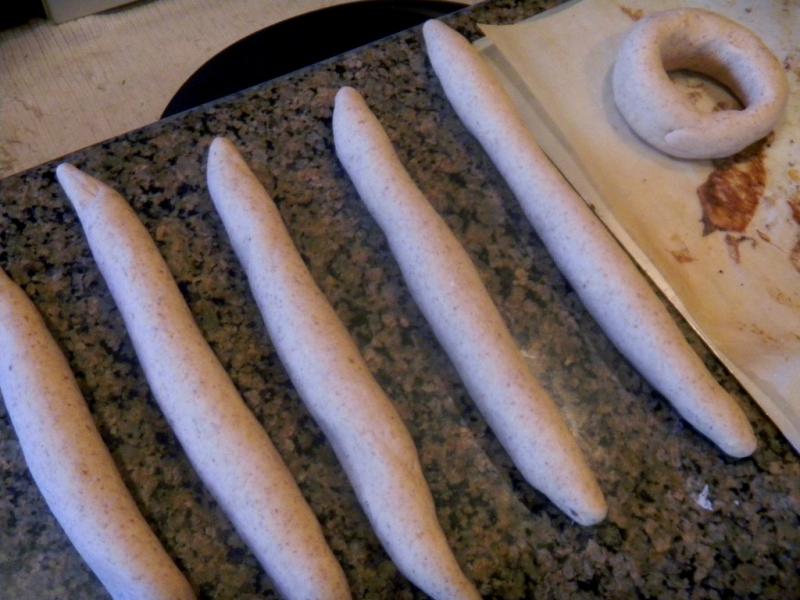 The hydration was the same but the temperature in the kitchen was 20 degrees cooler this time.  Last time the retard was 20 hours and this time it was only 10.  Lat time we let the dough develop 2 hours before forming and 1 hour after forming. This time we let the dough develop for 1 hour before forming and 2 hours after forming. 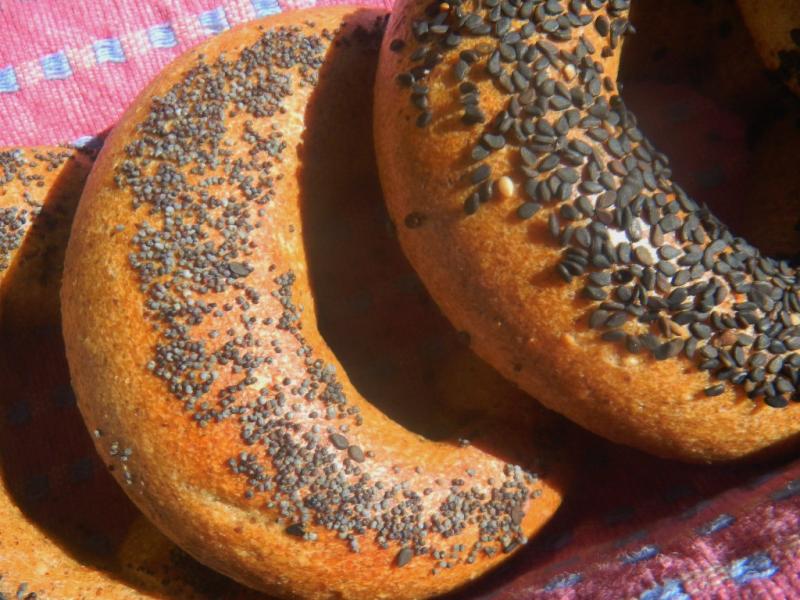 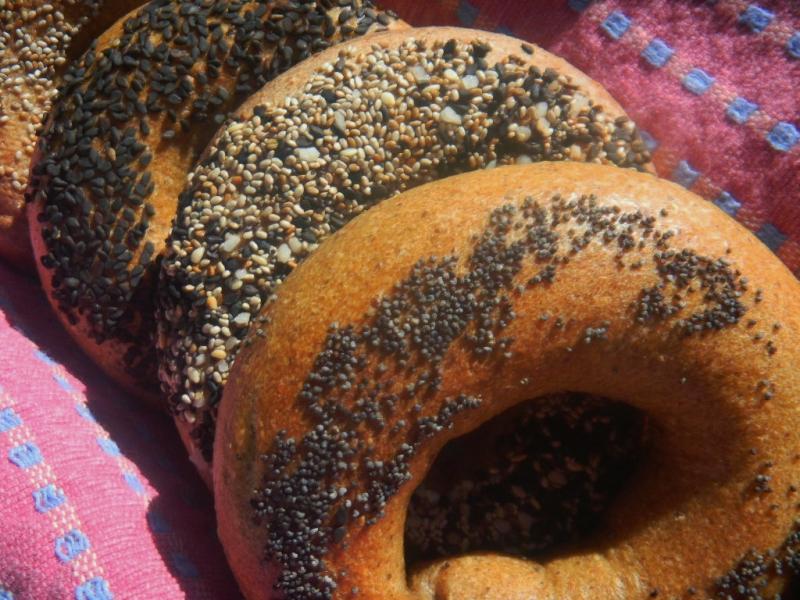 It just goes to show you that you need to watch the dough and not the clock and dowhat it tells you to do.  The main problem was the temperature.  It’s not August the 7th here when the kitchen was 84-86 F.  It’s the end of December and the kitchen is64 F.  Things now take at least 3 times longer and my apprentice should have known better! 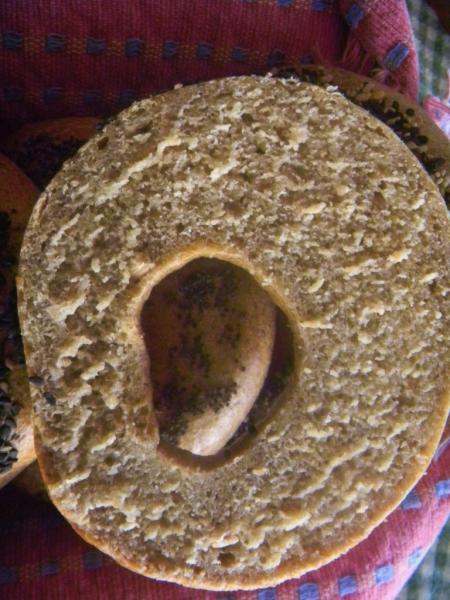 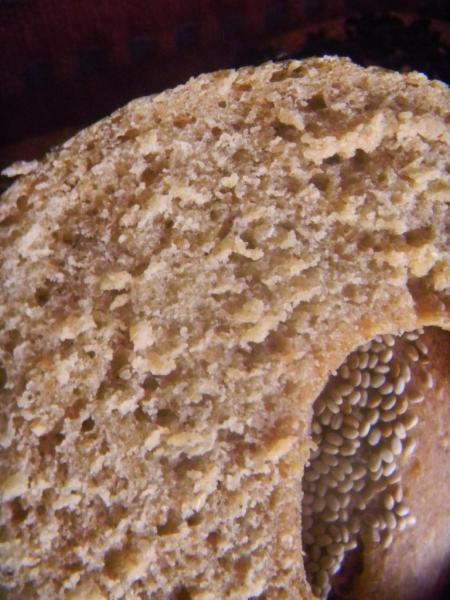 The bagels should have never gone in the fridge at all and left to double on the counter no matter how long it took and then refrigerated for an hour or two before hitting the hot water.   The extra whole grains also required more water in the mix at least 2 to 3% more hydration wise.

Te best thing about them is the taste but even that is not what it should be.  Toady Tom’s Tasty Toasted Tidbits did their part taste wise.  The crust was crisp but no big bubbles the mini oven and shlvia’s steam is noted for putting on crusts of all kinds.  The crumb never opened as it should have and as YW does regularly so it was denser than we were shooting for and expecting.

This happens every time you don’t let the dough develop properly and rise as it should when it is cold.  Patience comes to those who wait and it takes a lot of it in the winter time.

I forgot to put the 15 g of Barley Malt Syrup in the add in secion in the formula below - Donit for get it!

Sorry they didn't come out as good as your last bake, but toasted with a schmear of cream cheese and all will be good!

Loof forward to seeing your last post of the New Year.

I am going to make some more pretzel rolls tomorrow.

authentic NY bagels without lye.  The crust would never be right on.  I've been forced to use baking soda and barley malt syrup in the water which is a very poor substitute.

I'm getting ready to boil down Granny's soap if that is what it takes :-)

Your photography has come a long, long way from the days when I used to have to squint to look at your pictures.  -Varda

I used my phone camera which would not focus at all - for anything.  Once I got my daughter's hand me down Nikon, all has been well on the Photo Front.  These bagels look better than they are which is just the opposite of all the bakes before March 15th when the bakes tasted better than they looked.  I'm not sure how many Fresh Lofian folks I sent to the eye doctor but it had to be quite a few.  Sorry if you were one of them :-)

I too agree with Varda, DA, your photos are clearer and more presentable now. The bagels are a work of beauty! Well done DA!

The mini oven usually puts big  blisters on everything and I had room for (2) of Sylvias's  steaming cups instead of 1 this time too.  Not enough water in the dough and not enough time to proof properly  I'm guessing.

You must have not had the proper 3D glasses for my pictures before March 15th :-)

Hopefully, God willing,  you will be back to baking regularly in 2013 as your back recovers.  We miss your posts.

Dabrownman.  Is there anything you can't bake?  How long have you been baking breads and alike?

These look nice and healthier.  Of course, depends on how much cream cheese you slather on, but if you're like me, about half a pack per bagel works  ;)

SD starter in San Francisco in the late fall of 1973 and made some pretty fierce what we, back in the day, called 'Hippie Whole Wheat Bread'.  Then drifted away from bread baking and got into baking pastries for awhile and cakes, cookies, pies, brownies, cheesecakes, etc.  Then drifted into serious cooking as a closet cook for many years and didn't return to bread and other baking until a few years ago.  Was looking for a multi-grain challah recipe on line to try to improve mine and bumped into TFL in February this year.  Then it has been almost a year learning how to make and bake bread the right way.  Baked over 100 different kinds of bread formulas in the last 11 months.  I figure in another couple of years I'll have 85% of it down.

You will too I'm guessing.