No, I am not exaggerating. I took a trip to Antarctic earlier this year. At the end the voyage, we had a charity auction benefitting envirnment research groups for Antarctic. I set my eyes on this bottle of 10,000 old glacier water, $200 later, it's mine. How would I use it? Making a bread of course!

What's better than a traditional miche to complement the history of this water? The formual is based on the SFBI Miche posted a while back by David (here). I have made it before (here) with my own twist, this time I did the following:
1) I used all splet flour(150g) in levain, then some of it in final dough (75g spelt) to make spelt ratio to be about 20%. For the rest of flour in final dough (900g), I used Golden Buffalo High Extraction Flour.
2) Used my usual 100% white starter
3) Baked it in my large Staub cast iron pot. Preheated at 500F for nearly one hour, slash, load the loaf, cover, bake at 450F for the first 20min, remove lid, lower temp to 430F, bake for another 40min, turn off oven, open the oven door a little, leave the loaf (in the pot) in oven for another 20min before taking out.
4)My cast iron pot is oval so I shaped the dough into a batard, which is not the "usual" shape for miche.
5)The scoring was at the request of my husband: he want something that looks like "glacier", that's the best I could do.
Everything else remained the same, including the 2KG size, wheat germ amount, as well as fermentation/proofing schedule.

This formula never fails me, and this time it's no exception. A good thing, otherwise I would be wasting some very pricy water.

Wheat germ is the highlight of this formula, but this time, I can taste the spelt adding more layers of flavor.

Very meaningful and delicious bread. That bottle of glacier water was sacraficed for a good cause.

Priceless Miche.  Very much enjoyed your post.  I would have probably saved a little for the priest to bless.

Ian had gone bonkers using a $4 bottle of double chocolate beer for his fine bread - making it the first $10 loaf I had ever seen.  Then you come along and beat his record by a factor of 20 just for the water :-)  What is the world coming to?  Will we soon be burning  Picasso paintings to start the WFO?

Your $200 was well spent on a charty that needs it badly and your bread was better for it too.  What a great idea - a real 2fer.

We were debating whether to take into account the travel expense to Antartic as well, then this loaf would be ... REALLY PRICEY :P

good to finally realize, at least on my part, that this was really just another nice, if expensive,  bread vacation gone wild!  The lengths Fresh Loafians will do for unique and quality bread is amazing!

and a good cause to boot :)  I especially like the scoring and the photo of your cracking crust.  Flavor sounds wonderful, too.

I also love the really substantial crust on miches.

Beautiful looking Miche and I admire your inspiration and charitable ways!

Wish I could taste a hunk of your bread right about now!

Everytime my husband eats one piece, he's saying: another 10 bucks in my belly. :D

What a great idea to use that water in a bread. I wonder how much the loaf itself might have sold for at auction for the same good cause.

I know! Only if they had an oven to lend to me before the auction!

...and definitely the most expensive I've seen :)

And a lovely, lovely loaf as always!

I have had scotch on 10,000 year old rocks but never bread! Another inspiration!

I had schotch on 10,000 year rocks too! They brought some glacier ice out at the end to drink with.

We went ashore in Chile and chipped the ice off the glacier and into the glass. Then a wee dram or two! A great experience! Brings back great memories!

Well, you have just relieved all guilt I feel when I make a batch of dough using fresh dates that end up costing about $10.00.....I look forward to many years of guilt free baking now :-)

Your miche got my brain working and thinking about maybe trying one myself.... I decided to try making one today but I am not sure if it can really be classified as a true miche because, from what I have read, they are made with lean doughs.

I was planning on making several enriched SD sandwich loaves today and I took some of the dough to see how baking a large boule of that size would turn out.  The photo is what resulted.  It is 1300g and has yogurt, butter and agave nectar in it so the texture is sandwich - no crumb shot as this is going to the ladies at my local yarn shop....a little something to get them through their evening class schedule :-) 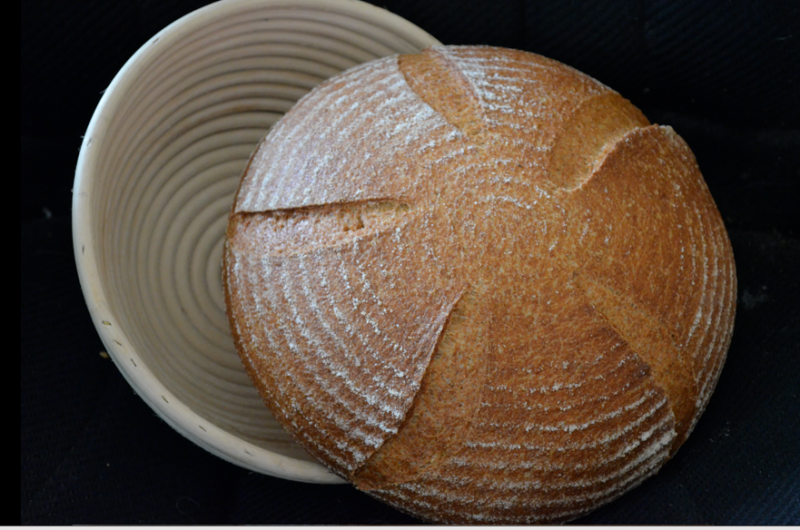 Take Care and Thanks for the inspiration.  Next 'miche' will be a lean one.  This was fun to do!

What a great looking loaf! bravo!

Think of all those loaves made with water that has not had a chance to ripen!

on the planet as billions of years old.  It just gets recycled in some places more often.  Lovely Miche and Janet yours too!