I offer the following hybrid of Sylvia's Magic Towels and David Snyder's contribution of the SFBI Perforated-Pie-Tin+Ice-Cubes methods.  This method has been working spectacularly well.  I bake in a small ('mini', so to speak :-) electric wall oven and have never been satisfied with steam.  Problem decisively solved.

MATERIALS: I assemble soaking-but-not-dripping wet terry towels on an oven rack, out on the counter, while the oven is heating up, as seen in the pic above.  Two small towels overlap each other on top and hang down the sides, between the outermost two rack rungs, right and left.  One larger towel (optional? haven't tested) rests folded up on top of the two smaller ones on the rack.  The smaller side towels extend down within an inch or 2 above the rack that holds the baking stone (a downsized Emil Henry), and do not hang above the stone, lest drips land on it causing loaf to become glued thereto.  Atop the rack and towels is a half-sheet dispo aluminum tray (12"x17" -- a full sheet is 17" x 24" -- but my oven is literally a 'half-oven'), into which six 1/4" holes have been drilled into the bottom at the right and left sides, about 1.5" apart, just above where the towels fold over the rungs and descend down toward the space between the edge of the stone and rack supports.  The tray is for ice cubes -- see method below.

METHOD: When the oven is fully heated, just before I transfer the dough from banneton to peel, I slide the toweled rack into the oven and close the door.  With the aluminum tray still on the counter, I place ~5 ice cubes along each side, above the drilled holes and leave it there while I de-banneton, slash and slide the loaf onto the stone.  Before closing the oven door, I set the ice-cube prepared tray on top of the towels on the top rack.  Five minutes later, I resupply the tray with 5 more cubes on each side.  Five minutes after that, I don my welder's gloves and remove the entire apparatus - rack, towels and tray - and set it in the sink.  Switch to convection bake. 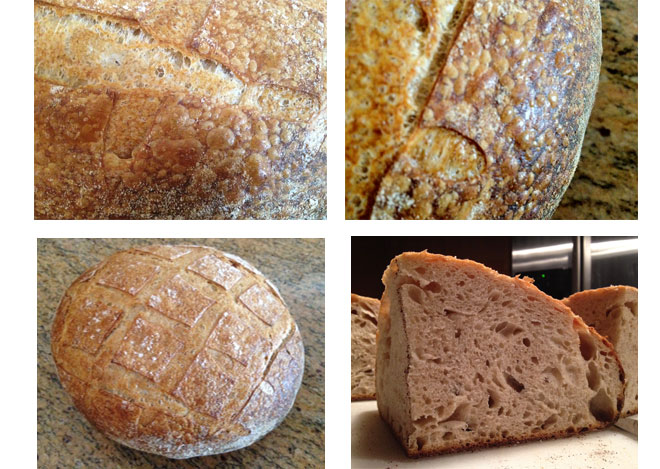 RESULTS:  Until I adopted this method, I rarely, and then only spottily, achieved desired gelation of crusts.  But this method results in absolutely spectacular crusts and oven spring (above; NB: because it's a small oven, I bake a lot of miches - one big loaf to minimize oven 'on' time.  This is Hamelman's Vermont SD w/Increased Whole Grain, as a single big miche).  When I opened the door to resupply ice cubes @ 5 minutes the first time I tried this, I got minor steam burns on my hands, such was the steam still in the oven.  Indeed, it is possible that those extra cubes aren't needed for the sake of the loaf's crust, but I still add them to assure that the towels remain wet (fire hazard - see below).  This turns my oven into a 460˚F sauna.

I tried the method of putting the pan of water on the top shelf and the bread on the lower shelf.

However, I discovered that all the steam basically went straight up and escaped through the vent without ever really circulating in the oven.

Therefore it did me no good to even bother. I had better results putting the water pan on the bottom shelf and the bread a shelf or two above. Then at least the steam going up had to navigate around the bread.

Me too.  I've had magic towels, lava rocks and iron scraps in cast iron pans top and bottom and never felt enough steam was getting where it was needed.  The evaporative surface area of the towels on three of the five possible sides (stone doesn't count) is the key here.  Fills the oven volume with steam.  Really stunning.

Nice work. Since the steam is cooler and thus much more dense than the rest of the air in the oven it should sink and mix quickly to fill the oven so towels on top is not really an issue.  I think you can probably calculate how much water it takes to create the right amount of steam and preweigh the ice and water to do the job.  That will contribute to being safe as well. Frayed edges are probably your greatest threat so heming them (or even inserting an aluminum rod to weight the edges) would help a lot.  And this should work well with quarry tile as well as with a solid stone (I have found that 3/8" quarry tile is the best trade between preheat time and thermal performance, with 1/2" being preferred to 1/4" if you have a choice).

Perhaps I overstated the fire hazard aspect of the Steam Curtain.  Better to err on the side of caution.  Hasn't been an issue, but I've been vigilant.

Frayed edges indeed could be a danger.  I love the aluminum rod idea!  Thanks for that!  Time to fire up the sewing machine and declare a dedicated steam curtain towel (and scrounge out in the shop for 2' of aluminum rod).  That will contribute majorly to preventing folds in the curtain that might threaten to touch the rack supports (and dry, and burn) or drip water onto the stone (other direction).

I'm wondering if anyone has tried this...

Since putting the water pan at the top shelf in the oven allows the steam to escape without affecting the bread, I wonder if putting a hot stone on the top shelf, the steam pan on the bottom shelf and the bread in the middle would work better the sort of "block" the steam in and minimizing how much escapes. I might try this, but I'd like to know if anyone already has; and if so, did it help?

In my "Steam Curtain" variation on Sylvia's and SFBI's towel and ice cube themes, the only functions of the upper sheet pan are to, (1) hold ice cubes and channel their melt water to drip right on top of where the side towels descend, and - to probably a lesser extent, (2) prevent water evaporating from the towel it's sitting on top of not to rise straight up and, as you say, provide little benefit to the crust.  Of course, all the heat and steam in an oven is going to rise to the top, without a convection fan stirring things up.  The advantage I see in the Steam Curtain is simply to saturate the oven volume with so much water vapor that it become immaterial whether there's more up top than down below.  It's everywhere.

otoh, having a tile or stone up top has another important advantage:  It will help crisp your crust during the second (post-steam) act of the oven drama.  Many TFLoafers have such an arrangement I suspect (Pips, e.g., is one I recall).  I've considered suspending one from the ceiling of my oven (we never use that broiler element).  Eventually perhaps.

Tom, have to tested to see if the water soaked towel would supply enough steam without the drip pan setup?

What if the top of the hanging towels were placed inside a pan with a predetermined amount of boiling water? Wouldn’t it wick down? My thought is, it would eliminate the cold ice cubes and also prevent opening the oven to add additional cubes.

I was impressed with your concept years ago,  ut never gave it a try.

I abandoned loading the top tray with ice cubes a few years ago when we moved to a house without the convenient (and functional) ice maker that our former kitchen's fridge had.  Now I slide an aluminum tray lined with another boiling-hot-water-soaked towel on top of the towel rack ~7 min into the 20 min steam and re-soak it with boiling water ~7 min after that.  Funny:  I replaced the ice cube routine with this Hot Towel Tray scheme in our last kitchen because I could not turn off the upper broiler element even when set to "Bake" (a KA design or defect?) and I was concerned it would dry out the towels and catch them on fire (and the Santa Cruz Mountains have enough fire to deal with).  So the addition of the wet towel lined tray was more fire prevention than steam addition.  Still doing it now even though this latest oven (a Bosch) has a broiler element that knows when to stay off.

This is such an interesting and ingenious set up Tom.  Kudos to you for figuring out how to make your oven work for you.  You are obviously getting the results that you want, what any baker would want with it.