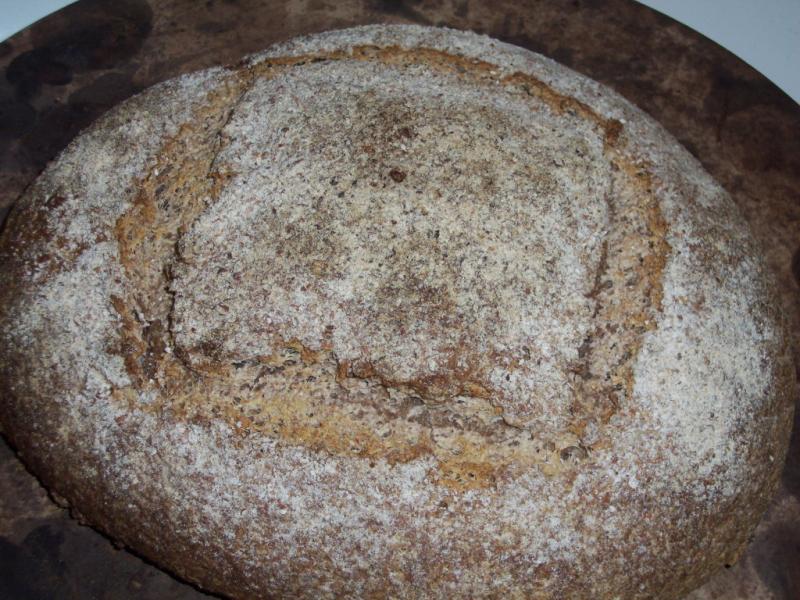 I am on a roll and it is called the sourdough-juggernaut insane roll. I mean what else do you expect in a despondent economy like ours? For a miserable proletariat like myself, who is underemployed, partly circumstances/partly choice, what better way to spend your days than to bake up some bread.

More recently, I ventured into the bread that I have long admired, this one being the Poilane-Style Miche from Peter Reinhart. Now, Lionel Poilane as a lot of bread enthusiasts would understand is clearly the best baker in Paris and so obviously the best baker in the world. It would be any bread fanatic’s wildest dream to be an apprentice in Boulangerie Poilane, someday. To my understanding, the Boulangerie Poilane even ships their famous miche loaves to the United States. I mean it may sound truly insane, but there have been days when I have actually thought of buying it and getting it shipped. But I have been resisting, for hopefully if I can save enough by next year and my stars finally do get aligned, I would love to go to Boulangerie Poilane in person and pay homage to one of the best bakers of my time. 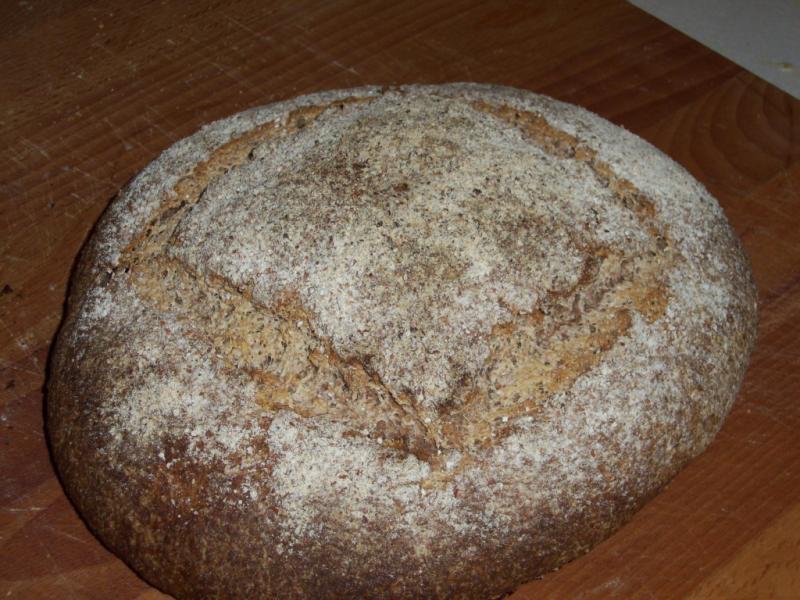 As I was getting started with my mission miche, I was also excited since I started my sourdough adventures it would have been my first date with an almost whole-wheat sourdough bread, since the only thing that wasn’t whole wheat was the barm (mother starter), made up of bread/ white flour. In my heart of hearts, I have always been a little scared of everything other than the bread/white flour, for usually the crumb always tends to be a little tight and dense, particularly when the percentage of whole-wheat is almost 100%.  Now, I knew about this occurrence even before jumping into mission miche, but nevertheless the idea of reproducing a miche by your own hands was seductive enough for me to get into it.

My first major issue in the process came upon while going through the windowpane test. I mean I have successfully administered the windowpane test for the bread/white flour; however, I seriously started questioning during this procedure- if a windowpane process actually exists for whole-wheat flour? I mean, I understand it is a lot harder for the gluten to develop in whole-wheat, but at the same time I didn’t want to over-knead my dough. 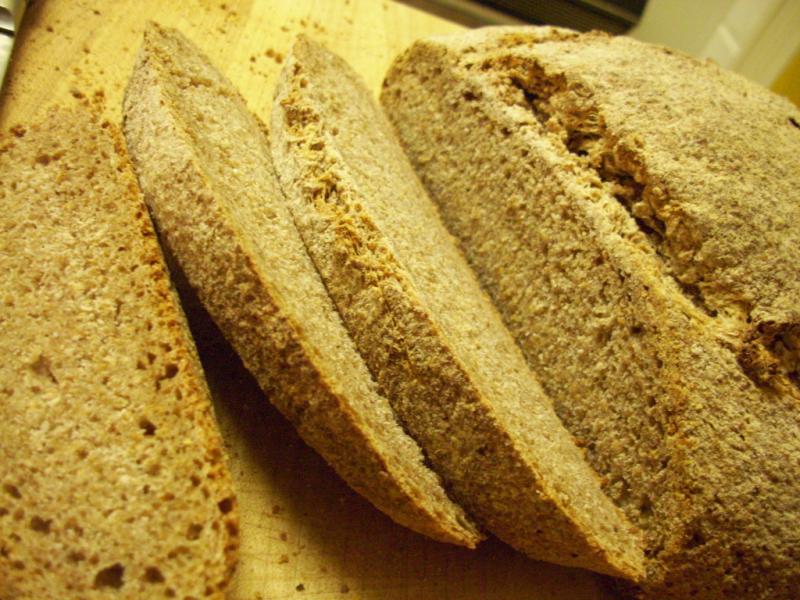 Also, with issues of kneading, proofing and baking, I had cut the original quantity in half. This way it was much easier to control the beast.  My final fermentation of the dough took place in a glass bowl, which I have started to question is a good idea or not, for some reason it tends to lose shape often, though not so much in this case, perhaps it was something to do with whole-wheat.  Just before launching my miche in the oven, I made some cuts or let’s say tried to. Now, I am not sure during making cuts, if one should just do it once and let it be, or actually sometimes go back and try to go deeper in the second or third turn. During this attempt, I went with the latter.

The miche stayed in the oven for slightly shorter time than Reinhart had suggested in the book, since my quantity had been cut into half from the original amount. Just to be on a safe side, I did check the temperature of the loaf and it had reached 205 degree Fahrenheit, before I took it out.  The miche looked good, not exactly like the Reinhart one or perhaps anywhere close to that but just about satisfactory.

Cutting into the loaf the next day was a slight challenge, definitely had to use some strength to open it up. And even though the crumb was slightly dense as predicted, the flavors were amazing; you could really taste the sourdough in it. Also, the crust was wonderful. The interesting aspect was that even though the loaf was considerably heavy while holding it, while biting through it- it actually felt pretty light!

Raj, you might want to go over to YouTube to check for video information on the Poilane bakery. I know that some members here on TFL have posted on their experiences at the Paris bakery and those posts should be in the archived threads in the Forum. One of Reinhardt's books mentions his journey deep into the production areas of the Poilane bakery in Paris and the new facility outside of the city proper. Finally, you could call the Whole Foods stores in Overland Park to see if they have the loaf there. It may be available in quarter loaf sizes. Have fun!

I have seen some videos of the Poilane bakery on youtube, although I would definitely check again. Now, did you mean that at Whole Foods in Overland Park they have the Poilane's Miche from Paris? I definitely have seen it a few times, but always thought it was perhaps produced locally by Farm to Market Bread Co.