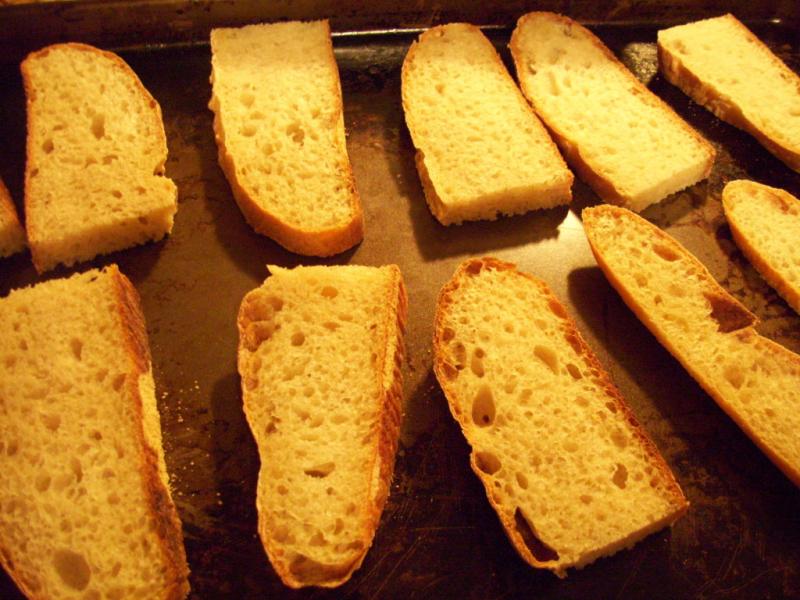 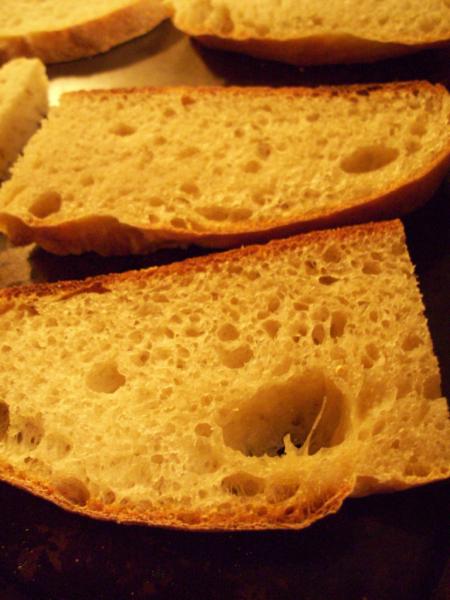 A couple of weeks back, I met a group of bread bakers in the Kansas City area through thefreshloaf.com. The meeting place was decided to be Barley’s Brewhaus in Shawnee, Kansas. At the meeting, one gentleman by the name of Paul had brought some sourdough starter to share. Paul told us that he had actually started that starter in 2010 in South Africa.  My knowledge in sourdough bread baking was limited then, but I was definitely curious to get started with some sourdough culture. Unfortunately, with winter still lingering and my home temperatures still hovering around 50 to 55 degrees Fahrenheit, I knew that my options of starting a seed culture were limited. At best, I would have to wait till the summer for warm weather to arrive and thus get started on the process of seed culture. Thanks to Paul and his generous contributions with the sourdough culture, I knew that I did not have to wait till summer and could get started immediately.

Unfortunately, baking with sourdough and keeping your sourdough culture alive is quite a process. It is almost like having a baby or even a pet. Unlike the industrial instant yeast that sits in your fridge, without crying for your attention this sourdough sucker demands regular feeding.  What is even more complicated is the math of feeding, aligned with the prediction of feeding and discarding. Unfortunately, I have never been good with numbers, whether understanding trigonometry or bakers percentage formula, and hence, I decided to write to Paul for advice on getting the sourdough thingy started. Paul was generous in replying back immediately to me on thefreshloaf.com, and his advice definitely came in handy. I mean I did bake my first sourdough bread, thanks to his number crunching. It may not be anything like the Boudin sourdough of San Francisco, but I am sure glad to have produced a loaf with just the wild yeast. So how did I get started? Here is my story.

As I told you guys before, Paul lent us some sourdough starter during our Kansas City bread bakers’ gathering. So basically, I had the sourdough starter in my fridge for about a week, before I got started on the process. Firstly, I took about 10g starter out from that chunk, right from its belly area- for the sides often tend to get a little dry. Then I fed about 10g water+20g flour to it, left it for 2 hours at room temperature, before sticking it back in the fridge.  So this was basically the feeding process, as I understood from Paul’s message.

After that I started with my baking process. This being my first time for sourdough baking, I decided to do Peter Reinhart’s basic sourdough recipe from BBA. Now the recipe called for 4oz of barm in the firm starter. Unfortunately, for some reason I thought it to be 4.5oz which basically equals to 125g. Now, I decided to do a 100% hydration levain for 150g, this way I could use 125g for my recipe and the rest 25g for my sourdough culture, which I would eventually feed and use for future endeavors. So as per the previous paragraph, I already had the starter with 10g water and 20g flour, hence for a 100% hydration for 150g- I added another 65g of water and 55g of flour. Left this at room temperature for about 4 to 5 hours.

Following that I started with Reinhart’s basic sourdough recipe—for that he needed about 110g of barm, which for some reason I calculated to 125g and stored the rest 25g out of the total 150g for future baking.  The rest of the process is pretty much how the basic sourdough recipe calls in BBA, except that in step 7 which is the fermentation for 3 to 4 hours where the dough doubles in size, and then one has to divide it in two batches of about 22oz, mine only came down to 20.5oz and 21oz respectively for some reason.  Also, since for the final proofing, I used a parchment-lined sheet, my boules almost spread flat and got attached to each other like Siamese twins. What also did not help was my scoring, which is pretty poor, and I would love some advice on improving that. Eventually, the loafs did get baked and I separated them after the process; obviously I wasn’t happy with the aesthetics of the bread- but otherwise it had some lovely holes/webs, and the best thing was the smell—you could really tell that it was a sourdough with one whiff! 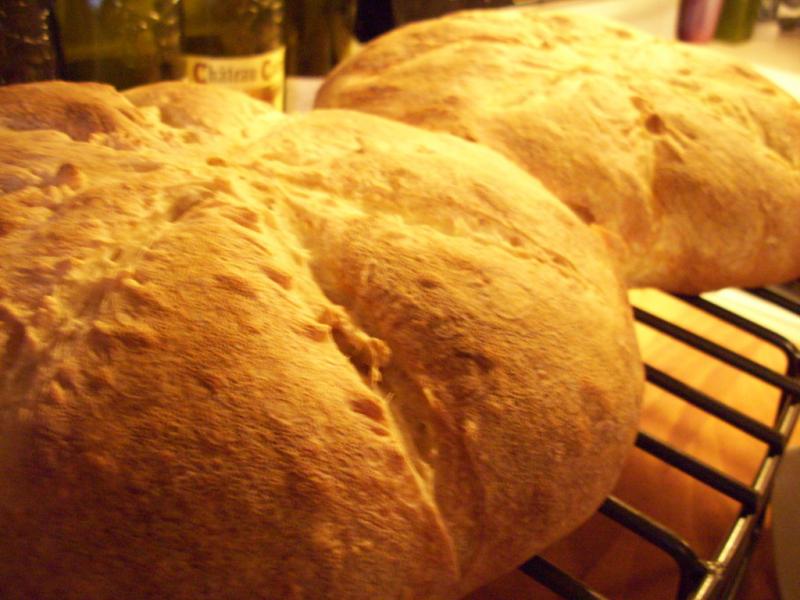 Don't worry, you got started, your breads don't look bad, and, most likely, tasted good, too. My sourdough beginnings were several weeks of dense "bricks" - it took a while before they lost their weapon grade heaviness.

If you stick with some good recipes (like Peter Reinhart's), and take written or mental notes of what went wrong, so that you can make the necessary adjustments next time you bake, you will steadily improve your technique. There are, also, a lot of video clips on shaping at Youtube, also, check out the Lessons section in TFL.

theuneditedfoodie
February 1, 2012 - 9:04am
Thanks for your kind words

Thank you for your kind words. I think the mental notes part is greatly important, I mean couple of things there I only realised when I actually started writing the blog. Yes, I will definitely be looking at some of those video clips for scording and shaping. I thought that after my scoring, I may have deflated my sourdough boule, a tat bit. But the flavor was good and plenty of holes/webs inside the bread.

I've been working with Paul's SA starter and it's a good one. Unfortunately for me, the room temperature in my house isn't optimal at this time of year so I have yet to see it triple in size. I plan on drying some of my next elaboration to stash away for a back up in case of disaster and for mad science experiments.

Do some searching in the archives for Flo Makani's 1-2-3 loaf. It's hard to go wrong with her method.

Thanks for sharing your story on how you got started.  I am impressed that you jumped right in with a sd loaf!  Took me months before I would even consider using sd!  My initial loaves all came out looking like frisbees - in fact, that is what I ended up calling them!  What surprised me was that people actually liked them!  So don't be so hard on yourself about how your loaves look as opposed to how you want them to look.  A common saying here is 'flavor rules'.

On slashing - it is still a hit or miss proposition for me despite the fact that I have watched many a video on the technique :-/

On the cooler temps and starters.  I live right next door in Co. and our temps here are cold now too.  My starter is stored in my refrig. and when I bake I simply take about 20g out of the jar and feed it 3 times throughout the day until I get the amount I need for the loaf I working on.  While the starter is fermenting I have it under a 50watt halogen light bulb that keeps the temp. at a pretty even 75°.  Very easy.

When my stored starter in the refrig. gets low I simply make up a new batch using the excess from a day's build so I know I have healthy active yeasties and beasties before slamming them back into suspended animation :-).  I generally mix up about 200g of a firm (60%HL) starter to keep stored at a time.  At that HL it will last for a couple of weeks before it ferments too far to be of much use

Take Care and Welcome to TFL!

Very true, the other day I was looking at Julia & Jacque and Jacque was emphasing something about nutrients, while Julia was constantly emphasizing on the flavor aspect- which I think is truly important for any food. Yeah, slashing is sort of hard, I mean I have tried here and there, but not much success as of yet. Btw, very interesting idea about the halogen light bulb. Although, I recently ordered a Brod and Taylor proofer, so that should certainly help. Thanks for the warm welcome Janet.

If the B&T is too small at times - any light bulb above your proofing/fermenting doughs or loaves and a heating pad beneath make a wonderful proofing area :-) ( I bake a lot of rolls and use full sized baking sheets so I need a large space on which to proof.)

On slashing. To date I have tried lames, razor blades, serrated knives and scissors.  What has worked the best for me are the inexpensive small serrated knives (3") and my latest discovery is a tomato knife that King Arthur sells - also reasonably priced.  I like it due to it's sharpness and the fine point at the  end.

I look forward to seeing more of your loaves :-)

Thanks for your tip on the knife and proofing also. I was just looking at some videos on youtube about shaping boules and batards, and also slashing/scoring. I really looking forward in putting some improvements on that front in my next project.

but it wasn't until 3 weeks ago, when I I started on the TFL ,that I actually made one that was half decent.  You are way ahead in the SD game and just needing a couple of more weeks of keeping the wee beasties alive and kickin'.  I grew up in KCMO - Raytown South High.