Starting on where I left this in my previous blog, long story short some viewers got offended by my choice of words in my previous blog of No Knead Variations Part I (http://www.thefreshloaf.com/node/26972/no-knead-variations-part-i), hence, I am going to mind my language here. However, if you would like to read the unedited version of this transcript please visit theuneditedfoodie.blogspot.com

Now on to bread, so previously I talked about two no-knead variations both inspired from Jim Lahey’s, “My Bread”. So after a 1-1 score of no-knead baking, where I did well with the Cranberry-raisin version while sort of not so well at the olive-garlic and rosemary version- I ventured further, this time for the first time into the rye bread category. Personally, I hadn’t used rye flour before this and so it was interesting reading Mr. Lahey’s advice, where he suggested using only 25% rye flour, the other 75% just being the regular bread flour. According to Mr. Lahey, the rye flour can be heavy in itself, hence, the idea to mix it with bread flour- just to keep light. Now, I am sure a lot of you will disagree with me here, but that’s not me its Lahey.

So, now where was I again? Yes, at the no-knead rye bread. Eventually, when I did mix the bread flour, rye flour, yeast, salt and water and basically let it rise for the first time for 18 hours, I was disappointed to see its rise but then that has been the case of my bread rising all this winter. I mean the temperature of the house tends to be around 55 degree Fahrenheit on warm days, so I basically end up locking my no knead mixture in a makeshift proofing room, alongside a petite heater. I mean you have to have your priorities right, either bread or a warm house, I prefer the bread.  If anyone has any better ideas for rising of bread at room temperature of around 50 to 55 degree Fahrenheit, I will be happy to abide.  So once the first rising was done, I took the dough out folded it once or twice, as suggested by Mr. Lahey and wrapped it in a flour towel and let it rest for another two hours.  After, the second rise of two hours, when the bread was finally ready to be slapped into the Dutch oven- I took a deep breath, said my prayers, and even promised my soul to the devil, if the bread came out alright.

Once, it was done baking, I thought that the texture of the bread looked good from outside. However, when I did cut into the bread, I felt that the holes weren’t big enough as in my regular no-knead bread. Obviously, I understand the fact that rye tends to be lot heavier, and that could have played into it- but you know, it was a success that wasn’t very sweet. Sure, it may be good bread, but it definitely had room for improvement.

Also, I had another question for my comrades on thefreshloaf-how do I upload pictures? I have tried a couple of times- it just keeps repeating upload failed. Could anyone care to send me some directions?

You can't upload large photos (= large data files). I email the photos to myself from my photo program, where I can choose between actual size, large, medium or small size. Then I save the photo on my desktop, and upload from there. For TFL a medium size is the maximum.

With a PC it should work the same way.

You can get a free Photobucket account that works relatively well for uploading photos here. There's an easy to use editing feature that will resize your photos into a reasonable size. There are archived threads regarding Photobucket use. I use it here on TFL so you shouldn't have a problem at all.

Rye and sourdough go together, sd bringing out the best flavours hidden in the rye.  The more rye in the dough formula, the more the rye flour needs acid to balance its "notes."  Check into getting a rye sourdough going or other ways to raise the acid levels in your dough.  I get the feeling you are not looking around much on the site, yet.  Many of your thoughts have active discussions and can be found in the site search engine.  Try looking up:  proofing box   or  keeping the dough warm  or  photo download help  or  favorite rye  or  questions about rye  or rye flour  or even ask the box simple questions.  There are also two current topics (or more) being discussed that could be of interest to you.

Btw, I heard somewhere that without a soul  (the bread tastes flat when) one is just a corpse.   Gee, please don't go there!   Keep your taste buds active and don't sign anything with blood.  :)

I have a no-knead  rye recipe to suggest to you that produces and good tasting and good looking loaf.

Shape and let rise for 1 hour.

35 mins. @ 435 uncovered Brush with diluted egg wash immediately after baking.N.B.  I use a 4 qt. oval cast iron dutch oven and I slash the loaves at the 10 minute mark when they are uncovered. 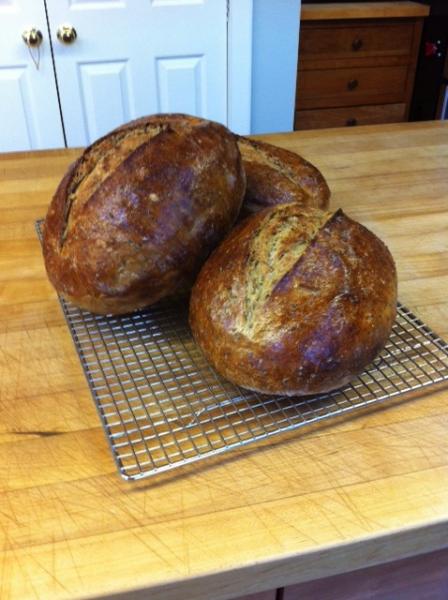 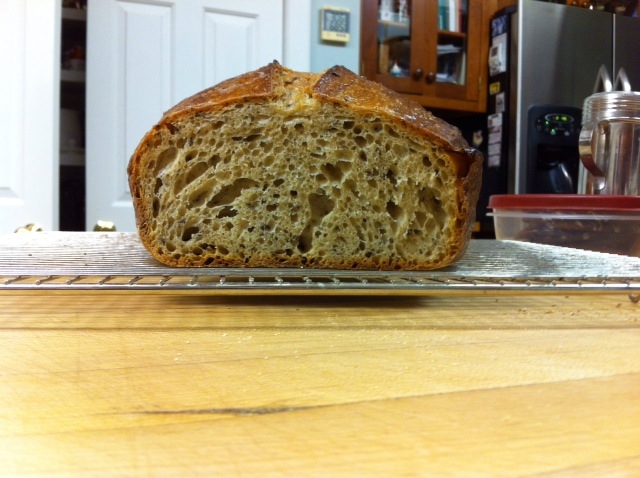 Thank you so much for the recipe, I truly appreciate it.

Thank you so much for the recipe, I truly appreciate it.

I decided to try your no knead rye recipe rather than the one in Jim Lahey's book.  I followed your instructions with only two changes--I didn't slash the loaf after 10 minutes (when I took the lid off it looked great as is) and I skipped the egg wash.  I will try to attach a photo as well so you can see the results of my first attempt today. 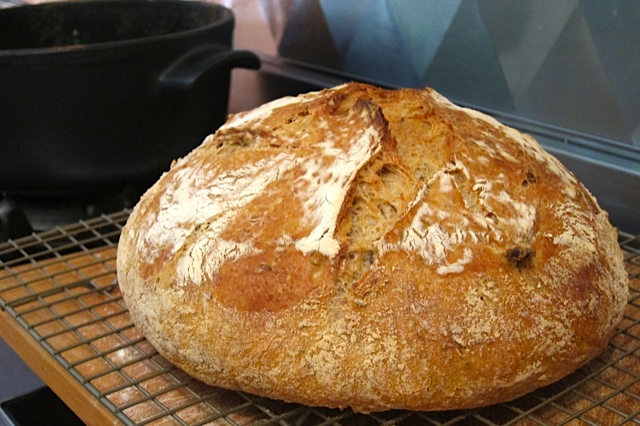 Looks delicious!  Pretty easy too.  Don't you think?  I only use the egg wash because when I was growing up in New York all the rye bread in the  bakeries and deli's had a shiny crust.  Your bread looks great.  How does it taste?  I'd like to see a picture of the crumb.

Indeed, thanks again for the recipe.  I had never worked with beer or rye so it smelt a bit funny when it was a dough, but  the smell was gone once I baked it--nor sure if that was largely the beer or also the rye.   It also stuck a little bit (had it on a floured silpat) when I tried to invert it into the dutch oven; but didn't seem to hurt the spring.

I thought it was delicious.  I don't know much about the crumb or what to expect from a no knead rye.  Would appreciate your critical assessment.  I am attaching the only photo I have of the crumb. Thanks! 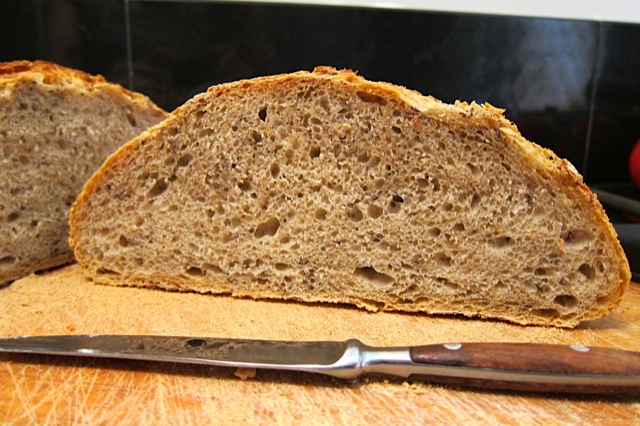 and something with beer can't be bad, anyway.

As a German, it always strikes me as very funny when Americans call a bread already "rye bread" when it contains just a small percentage of rye. This tasty loaf has just 12.5% rye and will certainly not perform very different from an all white flour bread.