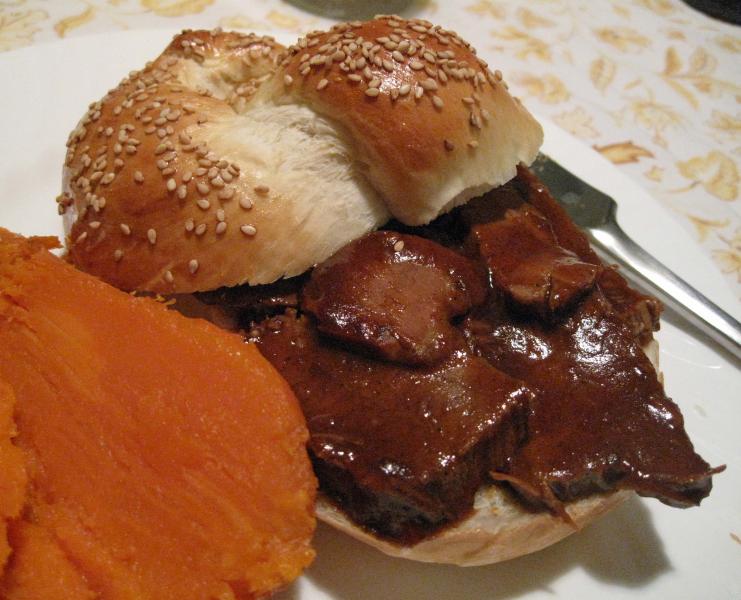 You could call it "FICTION." (Fraternal Inspiration to Cook The Identical Offerings Nightly) But it's true. Brother Glenn and I end up baking the same breads or cooking the same dishes more often than one would expect by chance alone.

My barbecued beef sandwiches are, strictly speaking, not identical to Glenn's. He used leftover rib roast. I used braised brisket. He made hoagie-type rolls from the Vienna Bread dough in BBA. I made double knotted rolls from the Medium Vienna Dough in Inside the Jewish Bakery. I served mine with baked yams and Curtido, a South American version of cole slaw. 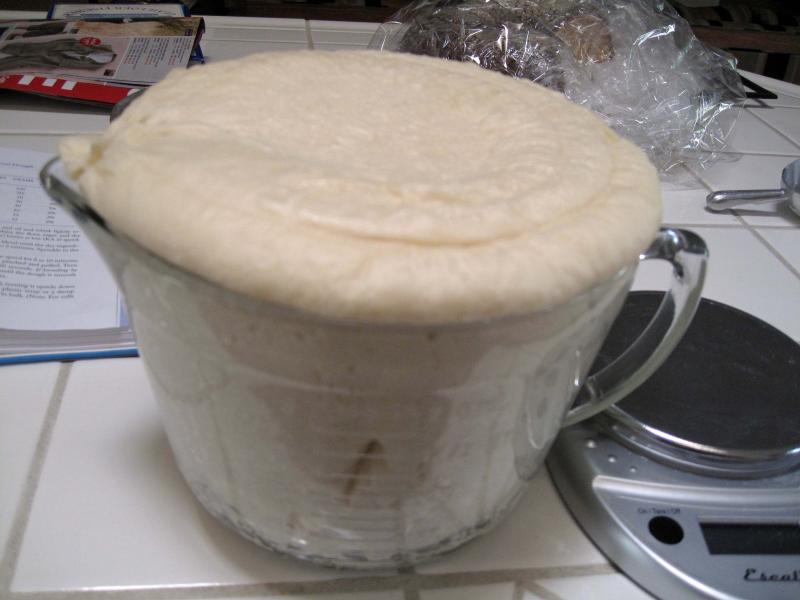 Even though this is a rather low-hydration, stiff dough, full fermentation yields a roll that is light, airy and tender with delicious flavor, yet firm enough to not get soggy and fall apart when used to make a saucy sandwich. I scaled the rolls to 4 oz, 3/4 proofed them, egg washed twice, sprinkled with sesame seeds and baked them at 350 degrees for 17 minutes. 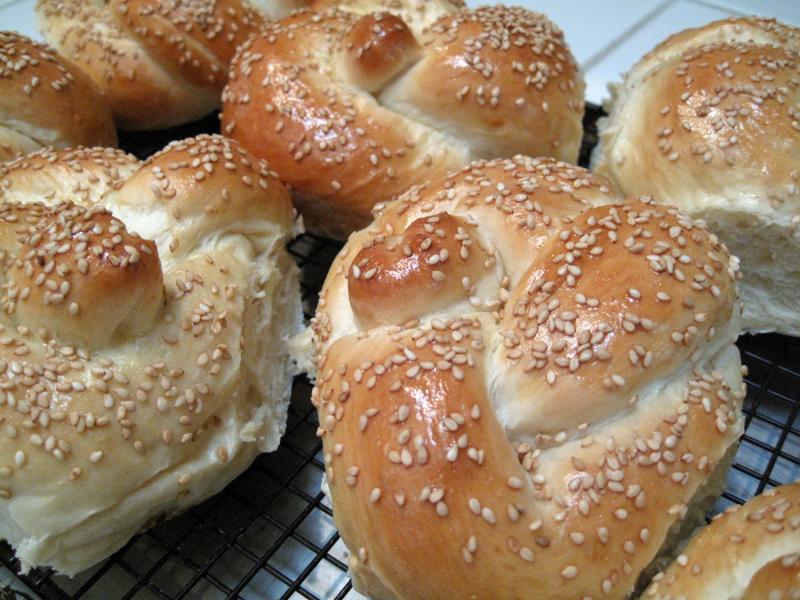 The brisket was prepared as follows:

Water to just cover the other ingredients.

Note: No salt. The sauce provides plenty of salt and spice.

Place all the ingredients except the water in a heavy dutch oven with the brisket fat-side up. (I used a Le Creuset oval enameled cast iron oven.) Pour in enough water to barely cover the meat. Cover tightly. Bring to a boil on top of the stove then place in a pre-heated 350 degree F oven and bake until the meat is fork-tender (about 3 hours). Bake uncovered for the last 30 minutes or so to brown the meat and reduce the gravy somewhat.

Transfer the contents to another container to cool to room temperature, then cover and refrigerate overnight.

The next day, skim off any visible fat. Slice the brisket thinly, across the grain of the meat. Mix about a cup of barbecue sauce (I like "San Francisco's Original Firehouse No. 2 Bar-B-Que Sauce.") with a few tablespoons of gravy (without the veggies) to thin it in a cookpot large enough to hold the sauce and sliced brisket. Simmer partly covered on top of the stove to thoroughly heat the meat.

Heap meat and some sauce on rolls and serve immediately with side dishes of your choice. 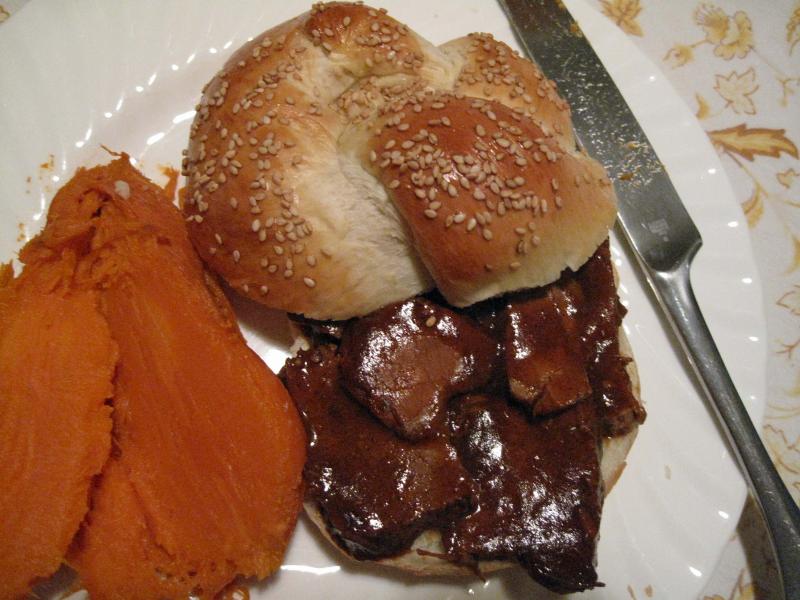 This week, I also made Hamelman's "Sourdough Seed Bread." I hadn't made this one in quite a while. It was even better than I remembered. Highly recommended! 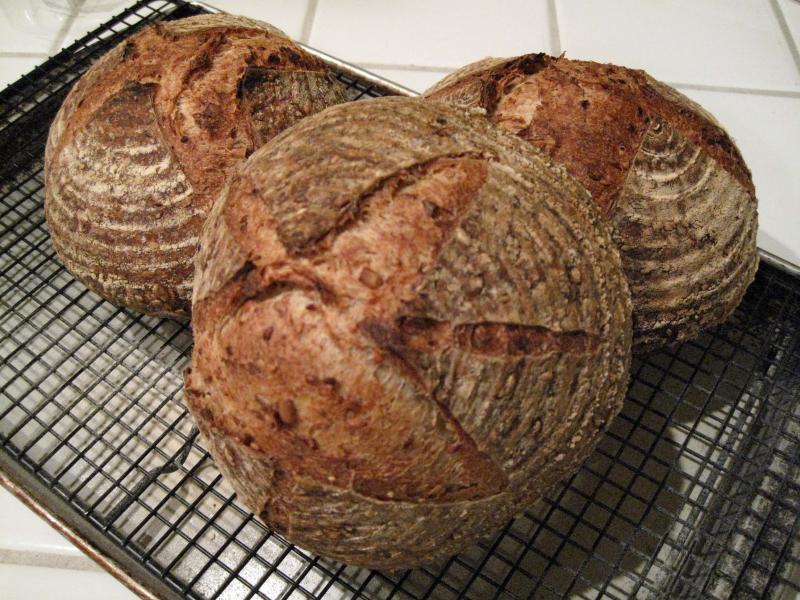 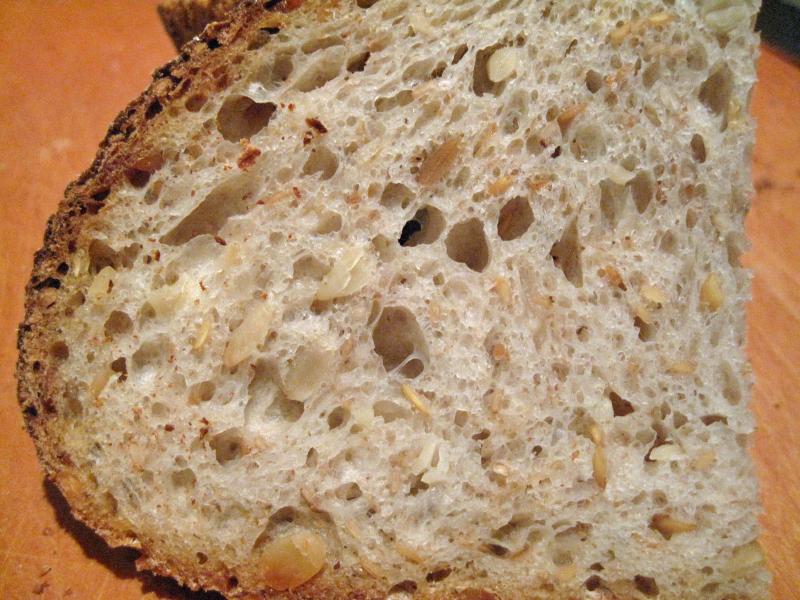 The knotted rolls have been a favourite of mine to use with students at the beginning of their bread baking journies, and yours do look light and tasty.   I note the recipe you follow calls for baking at 350F, which I see as 180*C.   In a fan oven I would bake at 210*C, in a commercial deck oven I would use 240*C with high top [8]and low bottom [5] heat settings.   I don't even want to say how hot I would go with a wood-fired oven....over 300*C, let's leave it at that.   Ideally I'd like to see the rolls baked inside 10 minutes.

Having read through Old Wooden Spoon's struggle with this dough as panned bread, I am aware the recommendation from the authors for baking is the profile you have used.   I just wonder if you think a hotter and shorter bake may be of any benefit, or if you think the cooler and longer bake really does work best?

A very Happy New Year to you

Andy, the rule of thumb for baking is based on bulk and dough richness: bigger/thicker/more enriched=cooler/longer, while smaller/thinner/leaner=hotter/shorter. David's technique essentially leaned out the dough in the same way that one leans out a Kaiser roll dough in order to produce the crisp crust and open crumb.  Under those conditions, hotter/shorter would be appropriate (with steam). When I make those rolls, I ferment to double bulk and proof to 3/4, then bake at 350/180 for 15 minutes or so.

David,  These look great.   My husband has been asking for rolls.   I think I know what it's going to be.  -Varda

These are very good. Do note that I made large rolls to use for sandwiches. For "dinner rolls," I would scale the pieces to 3 oz. and bake for a shorter time at a higher temperature.

Have a Happy New Year!

When I've made these rolls in the past, I've scaled them to 3 or 3.5 oz and baked at 375 degrees F. The crust got too dark. This batch was scaled to 4 oz, so a longer bake at a lower temperature seemed appropriate.  They certainly turned out well, so I am fairly satisfied. They could have been a little darker. I might bake at 360-365 next time.

I did not bake with steam. Oven spring did not seem to suffer.

The instructions for this dough in ITJB say to ferment to triple bulk for rolls to get a lighter, airier crumb. Again, the results couldn't have been nicer, IMO.

For Kaiser rolls, where I would want a harder crust, I think I would steam the oven and use a higher temperature.

I agree completely with you on use of steam.   Crusty rolls from lean formulae use steam, but soft and enriched rolls don't.

I'll be honest and admit that I usually bake these types of rolls using a bread improver [CDC] @ 1.8% and thus use a "no-time" process, as opposed to BFP.   I use the teaching session as an introduction which gives new students a feel for the whole baking process in order to truly engage them.

But I don't think this is the bulk Stan is referring to.   I take bulk in this context as the volume and weight of the dough piece.   I note David has used a very generous scaling weight of just over 110g.   Which leads me to suggest there is another equally important factor impacting the baking time which has thus far not been mentioned.   Namely "batching", and the distance between each dough piece when placed on the baking sheet.   Closely batched rolls will surely take longer in the oven than those given more generous spacing?

For your reference, I attach my formula for an industrial type of roll.   I only do so for comparison of formula to investigate baking profile further.   Figures given are %.

So, the dough is quite rich for a relatively standard bread dough, although I don't use sugar, which I accept is of great significance.   But I've been taught to bake as hot as possible to ensure the products are fully baked out but show no signs of burning on the outside.   Thus the dough spends no more time in the oven, so is not subjected to drying out any more than is needed to achieve baking.

I've posted the formula and profile for interest as a comparison only, as I am sure will be appreciated.

I would not use steam when baking enriched rolls either.   I would also add that baking in commercial deck ovens is very different to fan-assisted electric ovens at home; but we all 3 know that anyway.

Very best wishes to you both

My bake was nine 4 oz rolls plus one 2 oz roll. They were baked in a 3/4 sheet pan. When proofed, the rolls were touching. As you rightly point out, the margins close together were less well-colored. I hadn't thought about this factor before, but this configuration could be compensated for by a higher baking temperature or a longer bake time.

The formula that Norm provided for these rolls a few years ago was a bit different. It did include some milk powder, for example, which the Medium Vienna formula in ITJB does not.

The bar-b-que looks delicious.  We also enjoyed bar-b-qued pork after the holiday feasting..usually it's chinese.  The seeded bread crumb looks very delicious.  The rolls are equally delicious looking.  I usually don't steam my rolls if they are glaze washed before going into the oven and I give them a water misted spritz.  Are your rolls washed with a glaze before baking.  I do like my rolls a little on the brown side, but not if it hardens the crust to much for sandwiches.  I don't mind if they touch on the baking pan, though it does make them lighter on the sides.

Glad to see you are enjoying your B&T proofer.  I've also noticed an improvement in quality of my breads and it really perks up my starter to a happy state.  My starter smells of spices and fruit..must be all the holiday baking yeasties floating around the house getting into the water and flour.

I see where you did say you egg washed you rolls.  What egg wash mix did you use?  My favorite is to use egg yolk with a little cream, if I have it, or milk will do if I don't have any fresh cream.  I find it makes a nice difference for me in getting a lovely colored crust.

Thanks for your compliments!

I usually just lightly whisk a whole egg, sometimes with a pinch of salt, for egg wash. I've not added milk or cream. I'd guess it makes for a darker crust color.

I used to use the whole egg.  You might like to give the yolk only a try and you can add a little water instead of milk or cream.  It applies easier and smoother without the white of the egg.  The white makes for a nice white only scrambled egg or meringue.  Anyway, I'm a convert to yolk only washer 'lol'.

One must also take into account the thickness of the beef slices and the spiciness of the sauce.  As well as the relative humility of the chef.

Yes. All relevant. In addition there is the relative thickness of the chef and the humility of the chef's relatives.

Happy New Year to you and Cat!

On the subject of "FICTION", it appears we also both baked Hamelman sourdough breads with seeds this week, albeit not exactly the same formulas.

I've been meaning to try the seedy one you report on here; some time soon.

Happy New Year to you and Susan.

Picture perfect, David. And that brisket looks to die for.
Syd