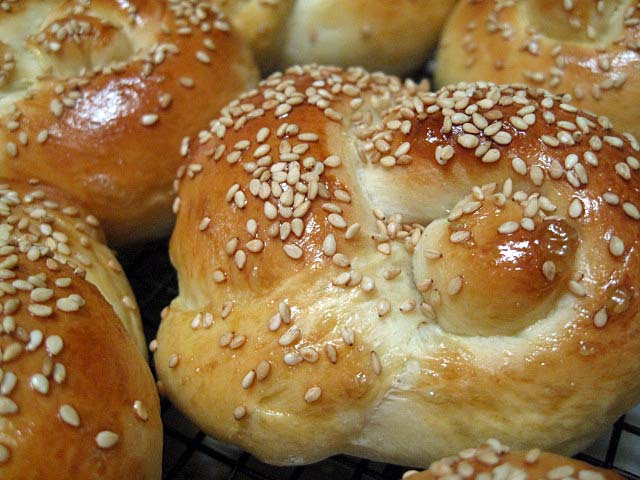 Three years ago, I made Double Knotted Rolls from a formula provided by nbicomputers, AKA Norm Berg, AKA co-author with Stan Ginsburg of Inside the Jewish Bakery. (See: Norm's Double Knotted Rolls) We enjoyed these rolls a lot, especially for sandwiches made with leftover Thanksgiving turkey.

When I received my copy of Inside the Jewish Bakery yesterday, I had already planned to make these rolls today. However, the book had no specific recipe for these rolls and no indication which of the three formulas for rolls should be used for them. I was pretty sure it would not be the "Light Enriched" dough, because that is the one used for Kaiser Rolls, and Norm specifically distinguished between the "soft roll" dough formula and that used for "hard rolls," like Kaiser Rolls. That left two formulas. Neither was the formula I had used in 2008, but I decided to use the "Sweet Egg Dough," because that looked closest. Here is the result (in photos): 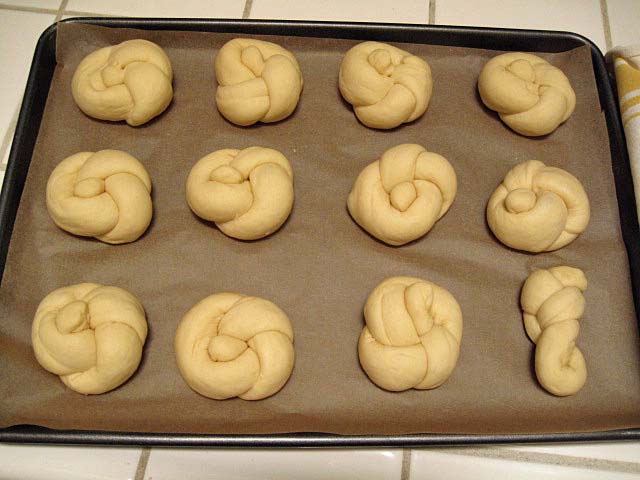 Rolls shaped and ready for proofing

Mixing followed the general instructions for mixing roll dough, and it worked well. Instructions (in Norm's words) for shaping can be found in this topic: Double knot roll. There are numerous YouTube videos of this technique, many erroneously presented as the method for shaping Kaiser Rolls. In addition, both Hamelman's Bread and Greenstein's Secrets of a Jewish Baker have good roll shaping illustrations. I scaled the rolls at 3 oz, with one bit of dough left over to make a sort of Figure Eight Roll. 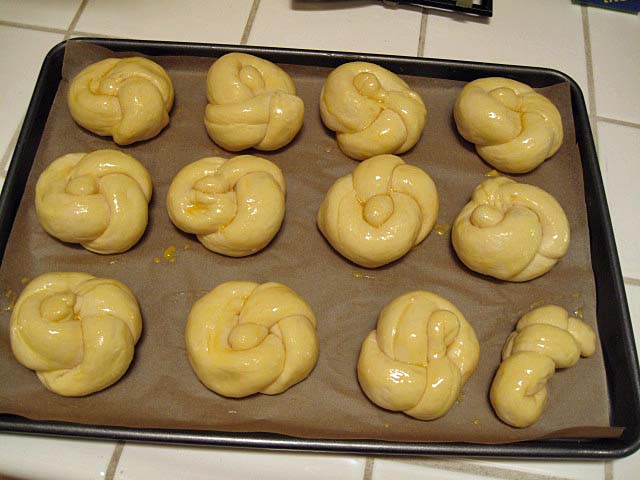 Inside the Jewish Bakery has an enlightening discussion of how different degrees of proofing were used for different products made with the same dough. For the Double Knotted Rolls, a 3/4 proofing is necessary to get the right crumb texture.

These rolls can be baked plain or with poppy seeds or sesame seeds. (Onion rolls are a whole other genre!) My wife much prefers sesame seeds. I can go with sesame or poppy. 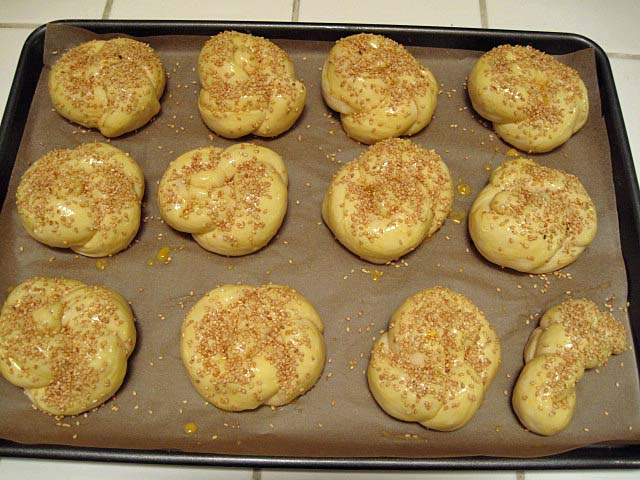 I baked at 350 F for about 15 minutes. The rolls were slow to brown. Next time, I'll use the oven's convection setting, probably at 330 F. 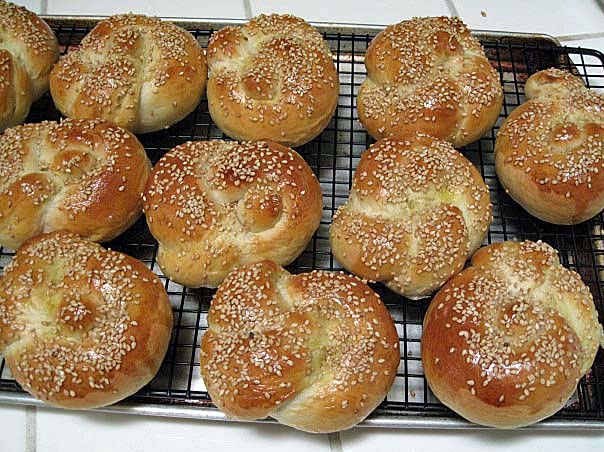 These rolls were less rich than I remember, but still very good.  Next time, I believe I would return to the formula Norm provided in 2008. Who's counting calories?

If you are going to go back to the 2008 version, where can we find that recipe for the knotted rolls, on this site maybe? I'm still waiting for my book to arrive, hopefully soon. Thanks, Jean P. (VA)

Even though the resulting rolls wouldn't look any more beautiful than the ones you prepared.  Awsome !

A link to my previous bake which has a link to Norm's formula is in the original post. Here it is again: Norm's Double Knotted Rolls

A warning: To get the full instructions, you need to read the full thread. They are scattered.

I'm really enjoying seeing everyone madly cooking their way around this book as I read along.

Knotted rolls are my favorite; Nice job as usual.

I keep telling myself I don't need another bread book but you guys are pushing me toward a purchase.

I can't wait for my copy to arrive.  Great looking rolls David

the shaping is just a technique; my preference is the Sweet and Rich Challah dough, with Bakery Challah coming second.

I'll take a look at those formulas.

those rolls are gorgeous.  we love them as hamburger buns.

LOL. That's what I baked the rolls for! Hamburgers were good, but my wife's comment was, "These are the kind of rolls I like for brisket sandwiches." To which my response was, "Nu? So make a brisket!"

Your rolls look terrific.  As to your doubt about the dough formula to use, the blue insert on page 108 of The Jewish Baker indicates that "...a bakery might start with 200 pounds of medium enriched dough (medium Vienna)...the bakers would start making the sweet rolls - double knots, onion pockets and so on...).  I would assume that the formula on page 110 for the Medium Enriched dough would be the formula to use.

I have to start working on my bread! Not just reading about it,but other things in life get in the way, drs appointments, husbands working and needing lunches, etc......... I'm sure that you understand. But I have to get some sort of thing going where I can actually work on some bread. The book is so interesting and outstanding, and can't find the words.

If anyone is on the fence about buying the book, take the plunge and get it, its worth it for the history and the plain love of baking that is on every page. The recipes might not be what you're used to, but they are great, and while some of them are tons of work, (rainbow cookies) they will definitely get rave reviews when you put them out.

I am saddened by the fact that these bakeries are going away, and that the commercial do it up quick has taken over, we are loosing so much of our heritage in not having them and similar ones in all parts of the world, this hurry up and wait life is getting to be a pain.

I recall making these - or similar - during the test baking period. Well remember they filled the house with the most gorgeous aroma while in the oven.

They're best on the day of the bake, I think? And damned good as I recall.

As you and others start posting bakes from The Book, my impatience grows. Every day, out to the letter box, but 'fraid it's a matter of "Wait - oh yes, wait just a minute Mr Postman...Mr Postman look and see...etc"!

I will take these to my neighbor's dinner tomorrow night.

I just received my copy of the book and baked these Friday! They came out picture perfect and delicious! Just like I remember! Let's hope I can replicate them in Israel.. 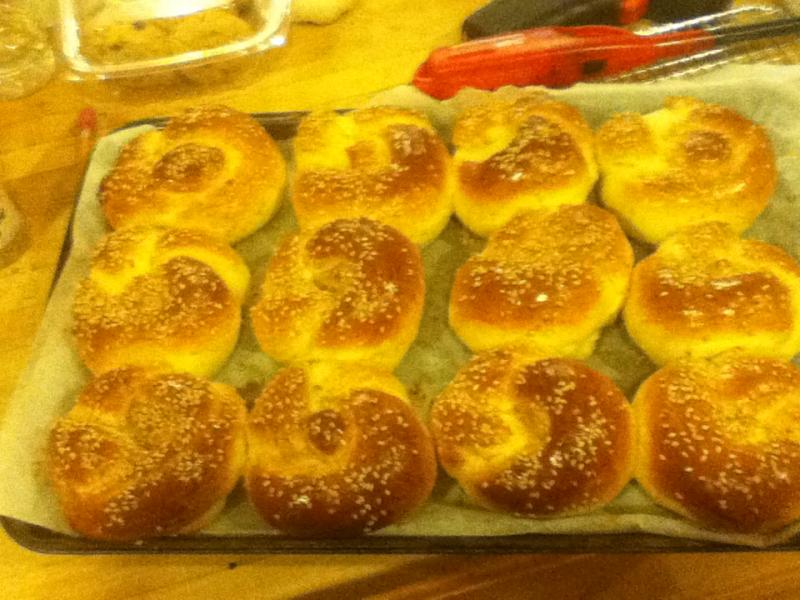 These rolls look nice! Before Thanksgiving, I tried making dinner rolls for the first time with good luck after only making Artisan bread and the onion rolls per Norm's recipe. I have very good luck baking bread and rolls since starting my journey 3 yrs ago with Jim Lehey's no knead bread.

I want to try these double knotted rolls and have the original recipe of Norm's from here. I compared it to a few of the dinner roll recipes I accumulated from various sources and it seems Norm's knotted roll dough recipe is very similar to a dinner roll dough, ie, a  medium enriched dough of similar ingredients. Any comments about this???