I so enjoyed Franko's post on his Pineapple Macadamia  sticky-nut Bun last week I had to give it a go. His crumb shot makes me drool and the step by step directions convinced me I could make a stab at something I don't do all that often. Sticky buns or cinnamon rolls are great but I shouldn't really eat things like that as a mild diabetic so I don't make them often. Let me tell you the effort is well worth while. This is a good idea Franko came up with and I haven't seen it anywhere before that I recall. You could easily swap out the pineapple for any fresh fruit combination and get a totally different flavor. My first batch I stuck with the recipe pretty much as posted but, next time---.

My dough wasn't all that smooth and silky for some reason and I haven't figured out why quite yet. It could be the way I incorporated the flours in the beginning. I misread the directions and added all the flours at the autolyse phase so the dough was a little stiff during autolyse. It didn't seem to hurt the over all performance in the end and it did smooth out by the time I got to rolling it up..

I decided to try a Jumbo Muffin Tin instead of foil tins which are slightly larger. The product size is perfect for one person even though I actually ate two:>) So here are some photos of the rolls as I baked them and then after being inverted onto a sheet pan lined with parchment. My wife and daughter were happy to see these this morning and the "Yes You Can" note I had left on the side when I finally went to bed late last night.

One substitution I made was using SAF Gold Osmotolerant yeast. I guessed and used half the weight that was specified and it seemed to work out well for me. The other swap was I skipped the vanilla and used a few drops of Fleur de Sicily in the sugar glaze. It has a nice fruity aroma I thought would go well with the pineapple. Vanilla would have been just as good, maybe better.

My crumb isn't as pretty as Franko's. His is much nicer in terms of softness and open cell structure. That said, I can't taste the picture and I can taste mine which is delicious. So I'm quite happy with my results on this. I'm certain anyone with a will could make it and be completely satisfied with the results. I baked half of the batch last night and refrigerated the balance for later this week. 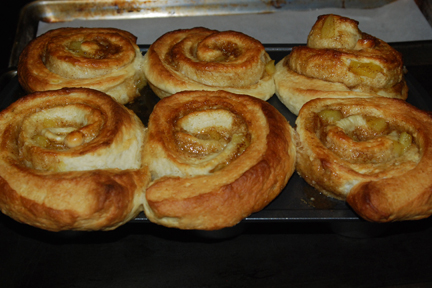 You can see I cut my slices too large and they started to expand out of the tin, unwrapping as they baked. 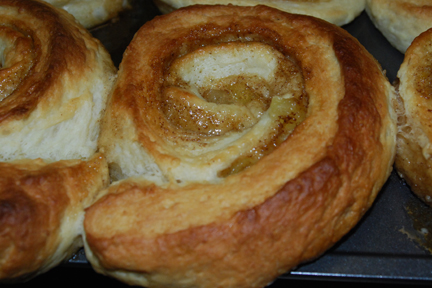 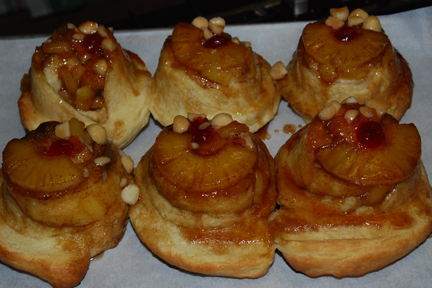 They popped right out of the tins when I turned them over onto the sheet pan. Very easy but hot. Be careful of the hot sugar! 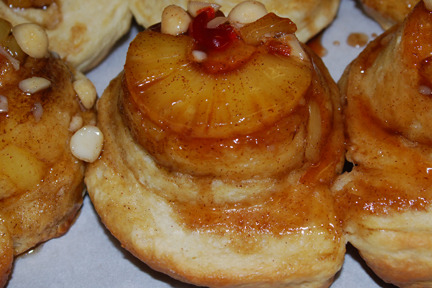 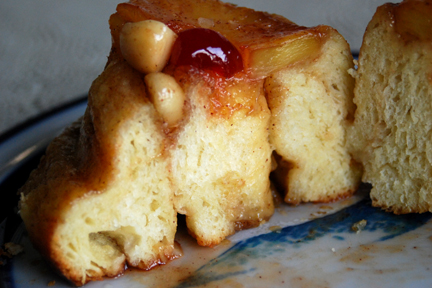 This one didn't stand up as well as others. Still a nice sweet dough that worked out very nicely.
Imagine this with peaches and lemon zest or blue berry's and lemon, or mango's and lime zest, or----

Beautiful and I have a fresh pineapple that needs using. We don't need the calories either but then you only live once . Thanks for sharing the pics. c

Thanks for being the first on TFL to dive into Franko's fabulous sticky buns!  They are high on my list, as I told him, and higher now looking at yours.

I tend to avoid really sweet pastries (even though I bake some), but heck, every once in a while you have to give in and enjoy the delight they are.

Well you know someone has to do the hard work. I think he came up with a nice idea here. I think I have made sticky buns maybe twice in my life but Franko's post looks so good I couldn't help myself.

I think it's great that you've taken to this concept and not only made some delicious looking versions of your own, but expanded on the idea with flavour combinations I hadn't considered. It really hi-lights the value of this site and what can be done by sharing ideas and methods. Good work my friend, and thanks for referencing the post I made last week, as well as all your kind words.

All I did is follow you in the door here Franko. Thanks for sharing a great idea and showing us how to put the little beauty's together.

Very enticing, Eric!  Have never made sticky buns myself but they have always appealed to me.  It might just be this post that motivates me to finally make them.  Lovely bake. :)

Give them a try Syd.

the links to the recipes don't work...comes up some Google Doc thing....so how does one get this terrific formula...I have the pineapple all peeled and chopped....c

Sorry, I've been logged in but away from the site. I just tried the link on my post and it seems to work fine, but what are you getting when you click on the link? No worries, we'll get this sorted out.

Both recipes are on GoogleDocs and both links on my post will link to the recipes, so I'm not sure exactly what the problem is your experiencing. I'll do whatever to solve it but I need some more info from you before I can help.

It may be that the link in Eric's post is one that links back to my original post that initially had a faulty link to the recipe. In any case here is the link that'll take you to the recipe on GoogleDocs. Sorry for any hassle trailrunner.

WOW, That is really great looking sticky buns, Eirc! I am very impressed.  I have had a mouth-watering picture of Franko's sticky buns in my head, Now your sticky buns popped my eyes actually.

Eric,
Using Fiori di Sicilia in the glaze is a really nice touch (those sweet buns must be 'delizioso'!).
That caramelized pineapple looks quite wonderful!
from breadsong

Well it takes me to something called Google Docs and you have to have a password/acct for Google email to get in. I have never used that so not sure how to do it. I think my husband has a gmail acct so if I get his password then where will I be ?  Will see in the AM what happens...sorry for my ineptitude. c

trailrunner, please send me an email message to ehanner@gmail.com and I'll send you the word document I made from Franko's post. It has all the images and formulas in it. You must have a browser security issue going on that won't allow you to view the google docs site. Sorry.