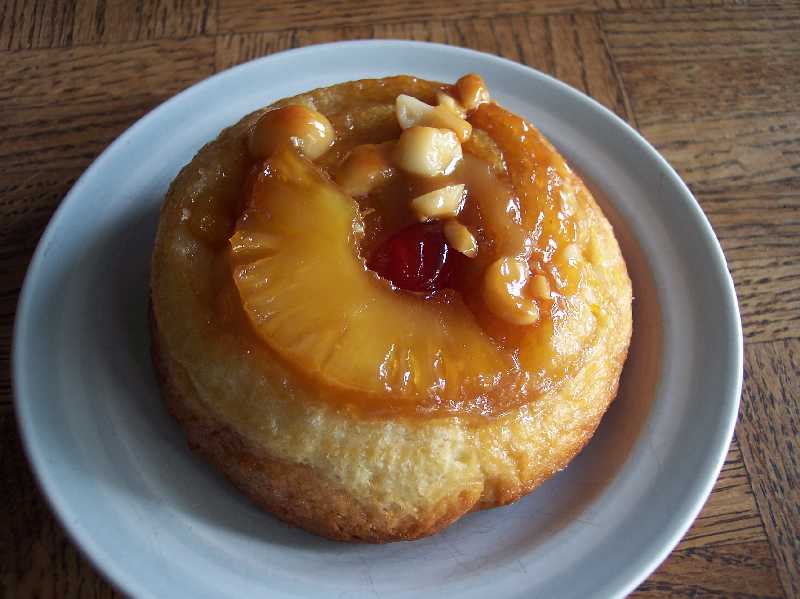 Last week I had the idea to make some sticky buns on my days off, not only because I enjoy them and have them so seldom, but also I wanted to contribute something to this long neglected blog of mine on TFL. The problem was I wanted to do something a bit different from the usual cinnamon and walnut/pecan variety of sticky bun. Often a flavour combination will come to me right away, but not this time, so I put it on the back burner knowing I'd eventually come up with something promising. Earlier this week I hit upon the idea of using pineapple in the buns, inspired by memories of one of my childhood favourites, the classic Pineapple Upside-down Cake, with it's delicious combination of caramelized sugar and pineapple. As far as a different type of nut to use, macadamia nuts were my first choice for their lovely subtle flavour and texture, and with ginger replacing cinnamon for the spice component of the buns. The dough itself is based largely on the Sweet Roll Dough from AB&P, but using whole milk instead of powdered , and increasing the percentage of yeast, as the osmotolerant yeast called for in the AB&P formula isn't readily available to me. Instead, I used the percentage (6.6%) that Jan Hedh calls for in his Sweet Bread formula from 'Swedish Breads & Pastries' . All of the formulas will be included in links below for anyone who'd like to try this variation on an old favourite for themselves.

The makeup is similar to sticky cinnamon buns , but you will need some rings of tinned or fresh pineapple as well as some chunks for the the filling. The rings are cut in half, each half going into a small foil tart pan that's been smeared liberally with Sticky Bun Glaze. Place a half maraschino cherry cut side up, inside the inner semicircle of the pineapple and sprinkle some chopped nuts on the other half of the foil. 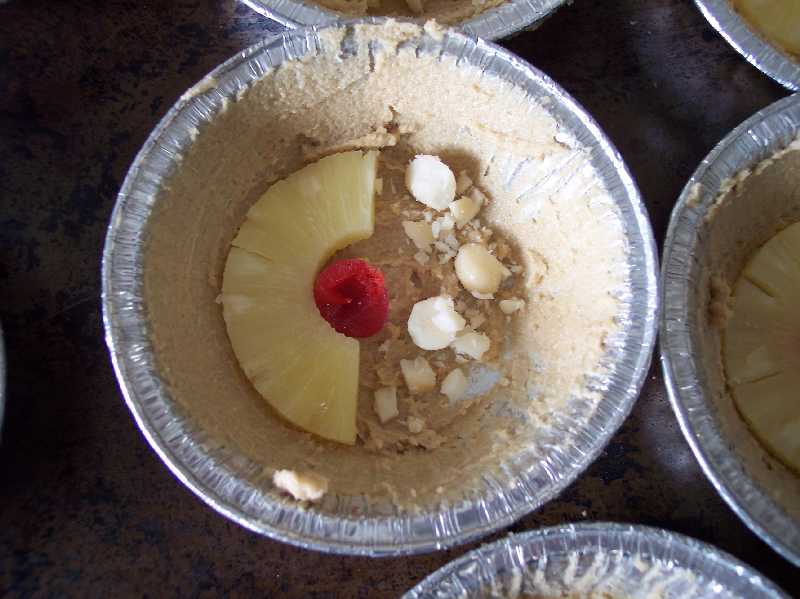 This can be prepared while the dough is chilling in the fridge. When the dough is well chilled it can be rolled out to a thickness of 3mm/1/8in and approximately 41cm/16in wide. Brush the entire piece of dough with some of the syrup reserved from the pineapple, or water, then sprinkle the ginger sugar evenly over the entire dough except for the bottom 50mm/2in . Apply small chunks of pineapple and chopped nuts over top of the sugar so that the dough is evenly covered to the borders. 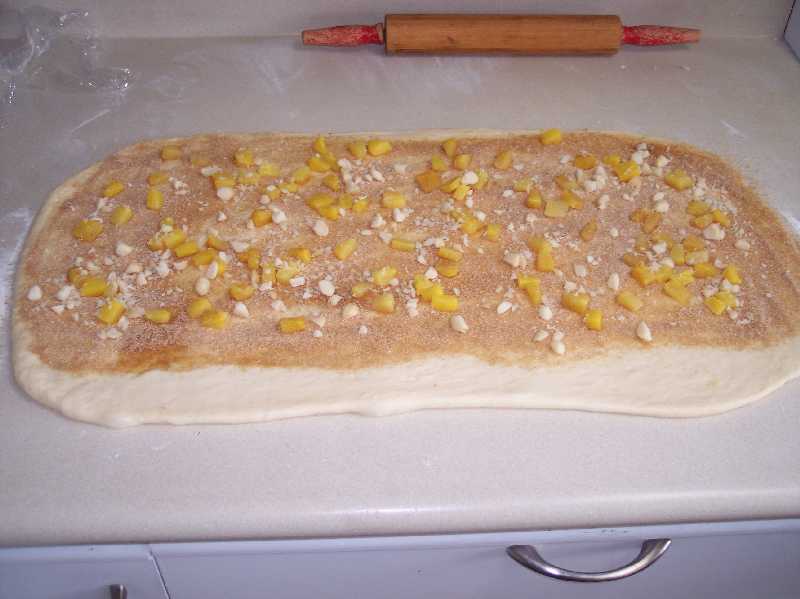 Roll the dough up as you would for cinnamon rolls. 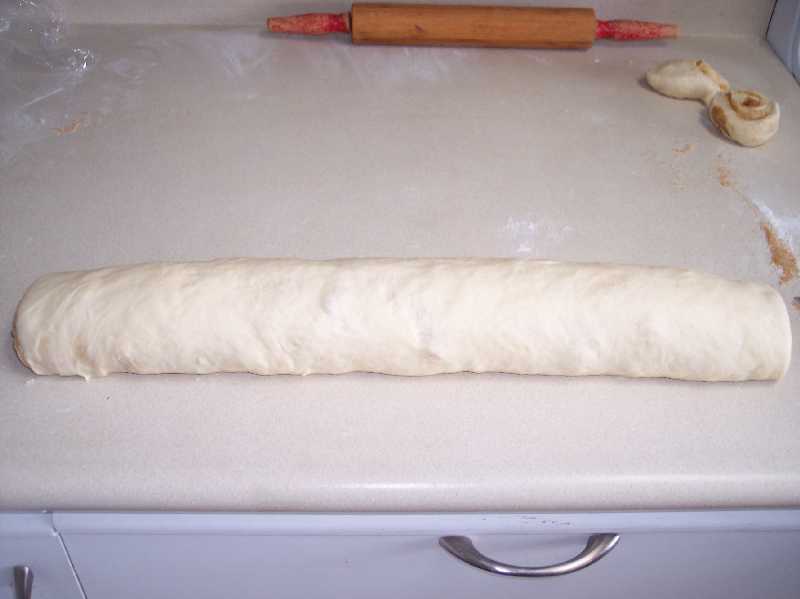 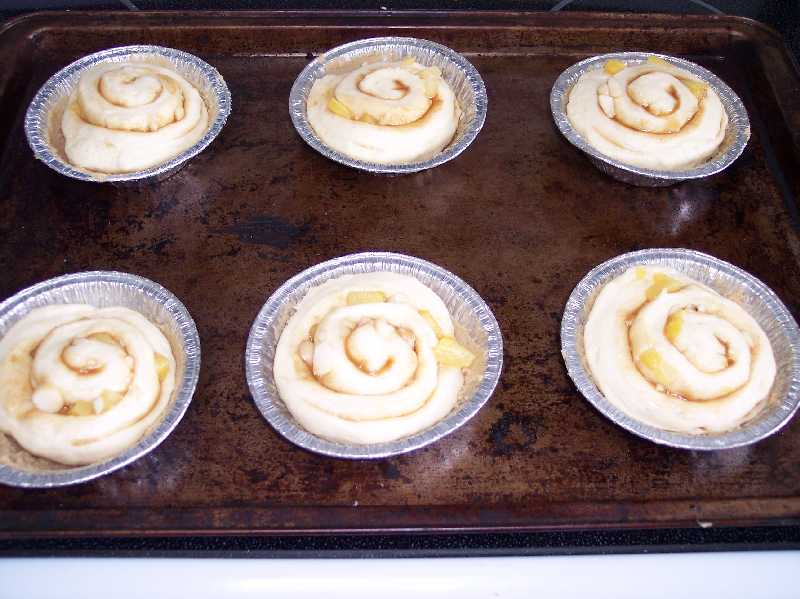 and slice into 115gram pieces, placing each in the prepared foil pans. Let rise for 45-60 minutes at room temperature and place 4-6 foil pans on a sheet pan at a time per bake, keeping the others in the fridge, and bake in a preheated 385F oven for 20-25 minutes. Once the buns have a light to medium brown colour remove them from the oven and turn them upsidedown onto parchment paper.

Note: Please be careful when doing this, using gloves or tongs to prevent a hot sugar burn.

Allow to cool for 1hr or longer before serving. This is easier said than done apparently in my case, since I was only able to last about 40 minutes before trying one out. The buns have a beautiful soft crumb that soaks up just enough of the glaze to impart the caramel flavour in every bite. It's everything you'd expect from a sticky bun and a nice variation on a traditional favourite. 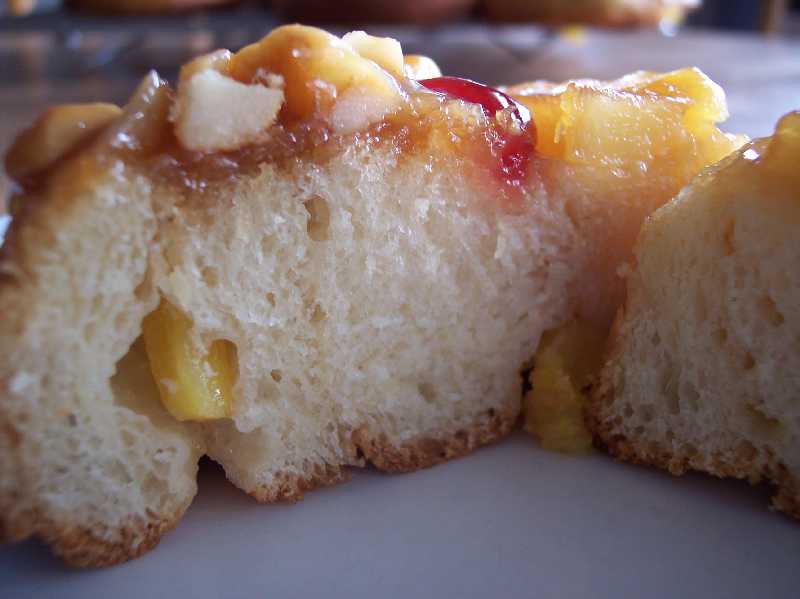 Below are the links to the recipes used . The first is for the Sticky Bun Glaze, the second for the Sweet Bun Dough

As always your process/product look wonderful.

Just a small point, clicking to google documents on the first link worked fine, but the second link's 'key' (last few digits in link) isn't highlighted in your post so access is a problem. I just copy and pasted them into the url and got through but if you can mend the link that would help others I'm sure. Meantime thanks for the 'hint' for how to deal with open office table formatted documents.

Thanks Robyn for your comments and the heads up to the faulty link. I'll get it fixed ASAP.

Those are magnificant looking, Franko.  I think the combination of pineapple, ginger and macadamia nuts is inspired - you've taken that pastry to a level above the designation "sticky bun."

We've just introduced cinnamon buns with cream cheese icing, along with biscuits, as a welcome basket for each table at Sunday's brunch.  So I was busy at work this morning rolling up dough and filling, just as in your picture.

Ah, but your filling is so much more enticing than mine, and the play on the pineapple upside-down cake is really cool!

Beautiful work.  And thanks for sharing.  I will try this one at home.

It's always nice when a concept comes out the way you hoped or close enough that you know you're on the right track. Next bake I'll use more of the glaze on the bottom of the foil since some of them stuck a bit, and maybe a wee bit longer bake profile, but other than that I'm fairly pleased with the outcome.Thanks for the great compliments Larry!

These look awesome as both Larry and Robyn suggest.

I just think, like you, that they are made from dough; not paste.   And the quality of your dough is completely outstanding.   Let's hear it for "sweet dough"!!

Hi Andy, good to hear from you.

I wasn't entirely sure how the yeast ratio was going to work out as far as the end flavour was concerned but it didn't have an overly yeasty taste to it IMO, so all was well. I've had sticky buns made from a paste and not my preference by a long shot. They just don't have the right mouth-feel for this type of application.

Thanks for your comments and compliments Andy!

I agree with Larry, Franko. These show originality and take the idea to a new level. The crumb looks very tender. Nice photos, too. Well done.

The crumb is very tender and moist, and carries the other flavours really well. I appreciate your comments Louie and all the best!

Very beautiful and a clever idea. Very original too. I love the idea of upside down bread. I can just feel the pineapple infuse the flavour into the buns, makes my mouth watering.

Thanks so much for your nice comments on the sticky buns. It's always fun to try something a little different from time to time.

I've been following your posts lately and thoroughly enjoying them, especially the visit to the bakery with that amazing looking oven.

Excellent! Boy does that look good.

Did you prep the tins at all before smearing with glaze? I'm wondering if those extra large muffin tins would work with foil liners? Turn it over and peel off the foil. A slightly smaller serving size for the get and go pastry counter.

Great job on these Franko!

Much appreciated Eric, and great to hear from you!

I sent a few off with Marie yesterday so she could have some of her colleagues try them and apparently they were a hit.  From the three I've had so far I'll tell you that they are really tasty and not as sweet as you might imagine. Do you mean spraying or oiling the tins as prepping them? If so, no I didn't. If you smear the right amount of glaze, particularly on the bottom they don't need anything more. The glaze has butter in it that helps to caramelize the sugar when it's under heat. Once you see some bubbles of glaze at the side of the bun it's almost ready. A bakery I worked at early on had muffin pans that were used exclusively for sticky buns and we never did anything to them other than use the 'bun smear' as we called it, directly in the clean pans. These guys had it down to a science so that when the buns were pulled from the oven and tipped out, there was almost no glaze left in the tins, with only a very quick and easy cleanup to do.

Great idea making a sticky bun with the pineapple and macadamia nuts!  I can see why they were a big hit.  Lovely pastry dough!

BTW, I love those old red wood handled kitchen tools...they bring back memories of home.  I have a roller, like yours, and the old french fries cutter, that was my mother's, the red is almost all wore off!

Just one of those ideas that worked out the way I hoped it would. Some do, some don't. That old rolling pin is one I bought when I moved into my first place, so by now it's a very experienced, well traveled, and treasured piece of equipment. My Dad used to have the same kind of french fry cutter you mention and would bring it out just about every Saturday night when it was his turn to make the family dinner.

Always great to hear from you Sylvia, and thanks so much for your compliments on the sticky buns.

Franko, Those sweet buns are so nicely presented, with the macadamia nuts as offset to the pineapple slice.
Mmm, some of my favorite flavors of Hawaii, brought together with sweet caramel; what a wonderful idea.
Thanks for sharing this!
from breadsong

Thanks breadsong, glad you like the presentation of them. I must admit I was doing a lot of daydreaming of past visits to Maui while I was making them. Don't know about you but I could really use some of that Hawaiian sun about now.

Hello Franko, We may be on the same wavelength :^) ...
I was daydreaming too (about summer, the fruits of the season & sunshine), when I was making blueberry spelt bread awhile back...!
from breadsong

That is a asuperb  Hawaiian style sticky buns. , Franko.  I almost missed your another great pastry. I have lived there for one and half years. Your buns reminds me of the smell of fresh pineapples and toasty macademia nuts that I ate very often.  Thank you for sharing and taking the time to write up well as usual.

That is a asuperb  Hawaiian style sticky buns. , Franko.  I almost missed your another great pastry. I have lived there for one and half years. Your buns reminds me of the smell of fresh pineapples and toasty macademia nuts that I ate very often.  Thank you for sharing and taking the time to write up well as usual.

P.S  I am sorry that I might click this twice and ended up  double  comments of mine here..

No worries about the double click, it's easy to do. Thanks very much for your compliments on the sweet rolls. Taking the time to send your comments during what must be quite a  stressful time for you with the tragic events in Japan over the last few weeks, is a very gracious gesture.

Thank you for your thoughtful words, Franko. I really appreciate it.