Hello,
I tried making Karin's Dinkel Walnussbrot and really enjoyed the texture and flavor of this bread.
Thank you, Karin, for your recipe and technique!!!

I wanted to try making Spelt bread again - I saw these recipes, that used blueberries (yum!) as an ingredient:
Shao-Ping's Caramelized Hazelnut and Blueberry Spelt Sourdough
and Farine's Apple Blueberry Bread with Spelt

Thanks to all of these ladies for their beautiful breads, and inspiration for this attempt, using spelt levain, spelt flour, dried blueberries, maple syrup and walnuts.

This is my second try. The first try I built up a spelt levain over three feedings, and the crumb was quite tangy, but offset by the sweetness of the blueberries. This time, the bread is not as sour and I like the flavor a bit better.
The tiny amount of maple syrup in the formula didn't contribute any maple flavor to the baked bread. 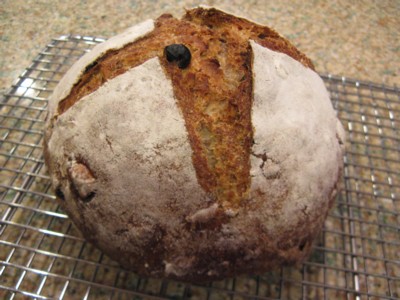 Crumb shot from this attempt (boule), then from previous attempt (batard): 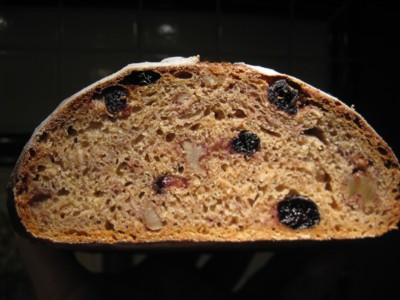 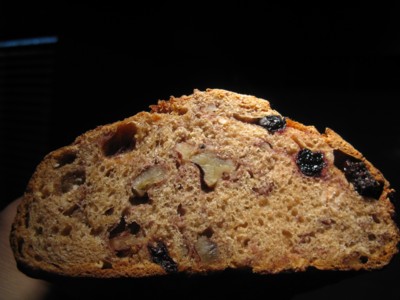 My sourdough starter is kept at 100% hydration; I adjusted the water in my levain to approximate the hydration of Karin's Biga in her Dinkel Walnussbrot.
I basically followed Karin's formula & instructions, but made some minor changes to accommodate the levain, & guessed as to how much yeast to include in the final dough:

DAY 1
In the morning, prepare the soaker. Leave at room temperature for 8 hours.
In the morning, mix the levain and leave at room temperature until double. At five hours, it had doubled - I put it in the fridge for 3 hours before mixing the dough.
In the evening (after 8 hours), prepare final dough: Soak the dried blueberries in warm water for 15 minutes, then drain.
Mix all ingedients (except for the dried blueberries and walnuts) at low speed for 1 - 2 min., until coarse ball forms. Then knead at medium-low speed for 4 min., feeding the blueberries and nuts slowly to the dough. Let dough rest for 5 min., resume kneading for 1 more min. Transfer to lightly oiled container, and place in refrigerator overnight.

DAY 2
Remove dough from refrigerator 2 hrs. before using.
Preheat oven to 425 F/220 C. Prepare for hearth baking with stone and steam pan.
Shape boules, place in bannetons, and let rise to 1 1/2 times its original size. (At 80F, this took two hours, until the boules had visibly puffed up.) Turn out onto peel or parchment lined baking sheet. Slash.
Bake bread at 350 for 20 minutes, steaming with 1 cup of boiling water. Rotate 180 degrees, remove steam pan and continue baking for another 30 minutes (internal temperature should be at least 195 F, and loaf should sound hollow when thumped on the bottom.
Let cool on wire rack.

We like this blueberry variation of Karin's bread.
Next time I might try adding a touch of natural maple flavoring when mixing the dough to see what that might add. Or, perhaps not - the spelt and other flavors are lovely as they are!

Happy baking everyone,
from breadsong

The crumb with blueberries and walnuts looks delicious.  What a great combination.  Nicely written post, thank you, breadsong!

Hello Sylvia, The blueberries and walnuts do taste really good in this bread.
I'm very grateful to Karin for her formula and method, and her Dinkel Walnussbrot, flavored with anise and fennel was just amazing.
Thanks so much for your kind words!
from breadsong

I love blueberries and also walnut, I will bake your recipe soon.

Hello Kimmy,
I'd love to hear how your bread turns out, and see a picture if you make this.
Karin's formula is a winner - I hope you like it!
Thank you, from breadsong

with the blueberries. And great looking bread!

I am not a great fan of raisins, I prefer a lttle more tang. Therefore I like using blue- or cranberries in my "fruity" breads instead.

I also thought about using a starter instead of a biga with my Spelt Walnut Bread.

There a so many great recipes around - it's often really difficult to decide what to make next - an old favorite, a new recipe from a book on my overflowing shelves, or one of the interesting TFL posts.

Thanks Karin - your recipe is now firmly one of my 'favorites'.
I'm so grateful to you for posting your formula and instruction, and to have some really good, organic whole Spelt flour from a local mill to work with.
The blueberries do add really good flavor - at this time of year, I think I was craving some sort of reminder of summer (fresh blueberries seem so far away at the moment - had to make do with dried, but it still was tasty!).
I'm so pleased that you like this loaf!
Thanks again :^)
from breadsong

or Blaubeeren. Terms for blueberries vary regionally. In North Germany, where I'm from, we say Blaubeeren (blue berries). If you eat them, your lips and tongue are really blue afterwards. When we picked them during the holidays with friends and children, we aways had a "Bluest Tongue Contest".

Blueberries is one of the many nice things Maine has to offer!

Hi Karin, Thanks for the correct spelling.

Blueberries is one of the many nice things Maine has to offer!