With all of the attention on the Miche breads of various members, I was motivated to try the one dmsnyder posted on. I was taken by the flavor comments and the use of toasted wheat germ. I took a stab at replicating the high extraction flour David used by combining 25% whole wheat flour with 75% Better For Bread (my stock AP). I use the fresh ground WW from Organic Wheat Products (flourgirl51) which is stone ground. She offers it ground fine but I have been using the more course ground product which you can see in the bread. David's photos seem to indicate a finer grind which would make the dough less speckled. Perhaps I'll run some of my WW through the mill to take it down a step in particle size. I think this would be a great excuse to order some Golden Buffalo high extraction flour.

I also took Davids suggestion with oven temperature and pre heated at 500F then lowered to 440F after loading and steaming. The vents were blocked for the first 20 minutes then opened for another 45 minutes. As you see, the crust is quite boldly baked. The areas of expansion are a lovely golden color. The singing is quite pronounced as would be expected with such a well colored loaf.

I think the next time I make this bread, I'll scale it up to 2kilo's as David suggested and shape it more oval. My dough weighed 1240 grams before baking and just 1002 grams after cooling for 30 minutes. The internal temperature was 205F when I pulled it from the stone. Normally I would dry out the crust by opening the door slightly after the oven had been shut down. In this case I thought the 65 minute bake was ample time in the oven to harden the crust.

I'm waiting for later in the day to slice this bread with dinner. Hopefully it will pare well with chicken piccata as bruchetta. I'll try to post a crumb shot later.

First I have to say this bread has taken me to a place I have not been before. Such simple ingredients are blended with time and careful handling to create a most wonderful eating experience. This is one of those times where the sum is greater than the parts. I believe David mentioned thinking that he thought the deep flavor was coming from the crust but in fact the soft, chewy crumb has this flavor all on its own. I don't profess to understand why the addition of a small amount of toasted wheat germ makes this flavor so unique (I'm guessing that's it) but I'm sold. Everyone loved the rich flavor of the crumb. The crust was shattering as I cut it, pieces flying everywhere even after 6 hours of cooling. My wife was not as fond of the crispy, crunchy crust on her teeth but the dog was happy to relieve her of the trimmed edges. I had made some dark turkey broth earlier in which I dunked some chunks of this miche. A perfect melding of flavors if I do say so. Just wonderful!

We ate the bread with dinner of chicken piccata and a tomato and onion salad with my custom dressing of abundant Gorgonzola cheese and spices. The salad is a bold side dish but believe me the bread held its own with the lemon from the piccata and also the garlic/onion/cheese dressing. A wonderful meal.

I might like to try this slightly less boldly baked for the general public. I do think the over all awesomeness (is that a word?) of this bread will be enhanced by baking as a larger loaf. I would love to make a huge 8 pounder. If only I can find a way to bake it. Hmmmm. 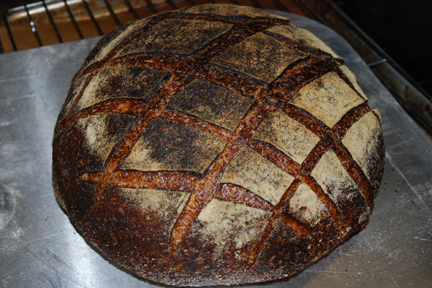 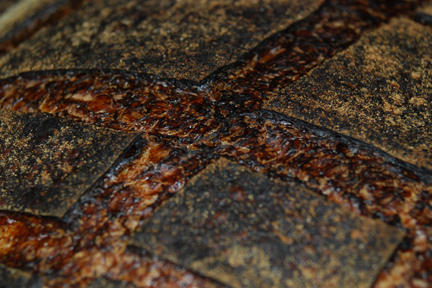 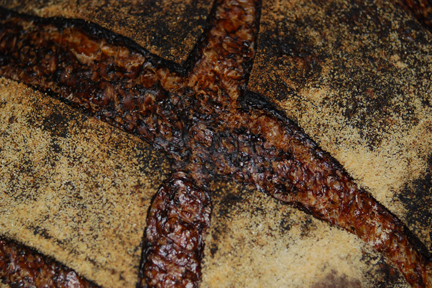 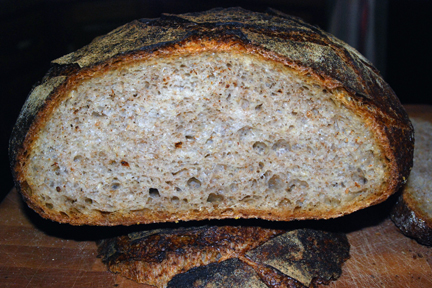 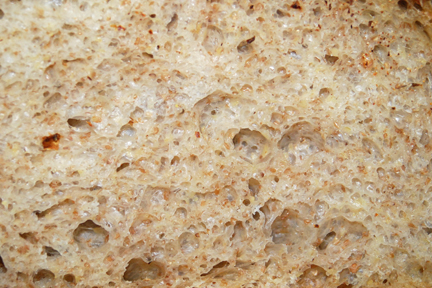 Looking forward to your crumb photo and, especially, your assessment of the flavor.

I have the levain ripening for a 2 kg miche which will be baked tomorrow. I'm following the SFBI formula for this bake rather than using high extraction flour.

Wow, this is a terrific bread! I'll have to take a look at the SFBI formula for changes. I'll have to figure out why this combination of 3 ingredients reacts so well. I don't do a lot of retarding prior to baking but the results are spectacular. Thank you for bringing it to my attention.

Beautiful miche, Eric.  That crust looks spectacular.  Just the right amount of browning.  Can't wait to see the crumb shot and read your comments on its flavor.

Thanks Syd. It's wonderful.

Beautiful, Eric. Now, with all the rave reviews about this miche, I'll have to try making this soon.

Love the color, Eric. That crust is going to taste awesome.

Two kilos next time?  That's a lot of bread!

Thanks Lindy. Yes that is a lot of bread but this one is nearly gone after one meal.

When I first saw your loaf on my iPhone at work this morning I thought it looked 'torched', which seemed very uncharacteristic for you, but now that I've seen it on my PC monitor it looks so much better. That's a bold bake all-right, but now I can tell it's caramelization rather than carbonization that's responsible for the colour. You're going to get some major flavour from that crust for sure. Great looking loaf and nicely baked! My apologies for ever thinking otherwise.

Haha, yes the smell of carbon still lingers in my nostrils from last weeks disaster. Fear not my friend, this is indeed carameliization. This is worthy of your efforts.

It does seem to be Miche season.  I just mixed the levain for a variation on the SFBI Miche (half Type 85, half Central Milling Artisan Baker's Craft, plus toasted germ) I'll bake Sunday.

Toasty flavor was great. I'll watch for your results.

That is a beautiful subsatntial miche, Eric! I Know it will pair with anything good!

Waiting for your crumb Pic!

Thanks Kahlid, it did seem substantial but so much moisture is lost in baking, it doesn't seem so large now.

It looks a lot like one I baked last December. 1.5kg "French Bread" flour from Wessex Mills, about 900ml water + yeast, salt & a little sugar.

I formed the dough (approx 2.4kg) into one large boule and put it in the oven on a baking sheet at 200C. Then I got distracted and it was baked for about twice as long as I'd intended! It looked very similar to your loaf with a thick dark crust. Nevertheless, the loaf was fine and tasty, none the worse for it's extra sojourn in the oven.

Like you I think I will cut down on the baking time the next time I make it.

Thanks. I'm surprised at how sweet this is with just 3 simple ingredients.

It is amazing bread. My admiration for the formulas developed by the SFBI staff continues to grow.

I'm baking a 2 kg specimen this afternoon. The formula, recalculated for this larger version, will be included in my post for you and others who want to bake a 2 kg version.

Thanks David, Credit due to the staff at sfbi indeed. I'll be watching for your post.

Just to let you know: wheatgerm is a great bread improver in non-toasted form.

Toasted, I think it will be all those wonderful flavours coming out from the oils.

Is the middle of the loaf the same consistency of crumb as the outer reaches?

Thank you Andy for you kind words. I'm a student my friend who gets lucky now and then by listening to the advice of those who truly understand. But, thank you.

Yes the crumb was quite similar all the way through the piece. Usually my sourdough loaves are more moist/damp in the center. The longer baking time is helpful in this regard I would suppose. 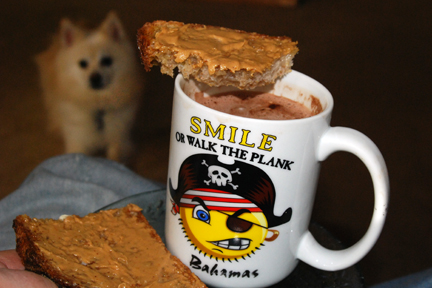 One of my all time favorites is crusty bread and peanut butter, dunked in hot coco. My very good and trusting friend Archie, waits patiently for me to drop the whole stack on the floor.

Hello Eric, I must try this miche of David's. I was convinced before but reading your flavor report has me wondering - What am I waiting for?!
from breadsong

C'mon! Time's a wasting! You will love it!

Oh, looks so tasty! I love the crust color. Gonna try this one soon!

I'll be watching to see how you do this. It is delicious!

and full of soul!

Greetings from cold and rainy Taipei!

So happy to hear from you. From one soggy bottom to another eh?

I love the color of the caramelized crust.

I've used wheat germ, toasted and not, for quite a while. It adds wonderful taste and texture.

The crumb is so nice. It is difficult to maintain a consistency through the heart of the loaf. Maybe there is something to a slower bake.