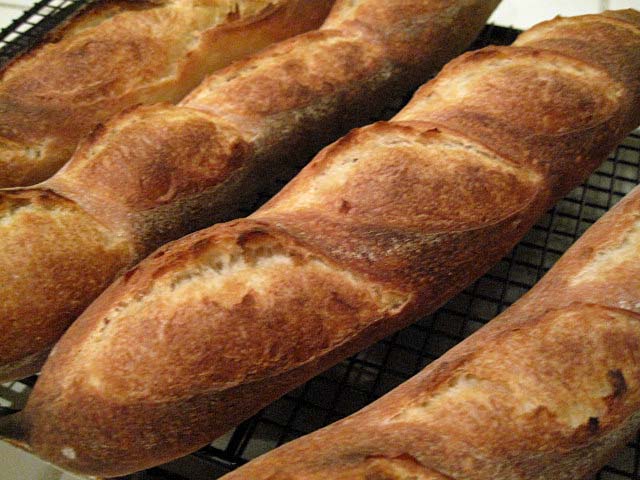 Pat's (proth5) baguettes have been my “go to” recipe for baguettes for quite a while. When she posted a new formula in November  - See Starting to get the Bear  - I promised myself to give them a try. I got around to it today.

These baguettes are made with both levain and a poolish and are spiked with some instant yeast. They still have a relatively long fermentation, for yeasted baguettes. Pat's description of her method included baking some of the dough the day they are mixed and retarding some to shape, proof and bake the next day.

Here is my interpretation of her formula a methods, with some modifications, as described below.

Because of the size of my baking stone, I divided half the dough into 4 pieces to make mini-baguettes.The dough handled really nicely, I thought. The baguettes were proofed and baked as above, according to Pat's directions. After 17 minutes, they were rather dark, especially the one at the back of the oven. They sang loudly when removed to cool. They came out of the oven just in time to eat with dinner, for a change, rather than just in time for bedtime snack. 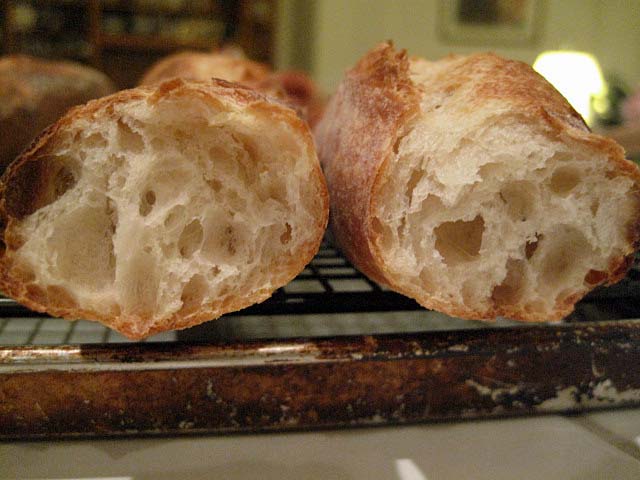 The crust was very crunchy. The crumb was quite chewy and nicely aerated. The flavor was good, but I will use a bit more salt next time. I think I will also bake at a somewhat lower temperature for a slightly longer time. 460-480ºF for 20 minutes would be better for me, I think.

Addendum: I baked the second batch of baguettes today. I baked these at 470ºF for 20 minutes. 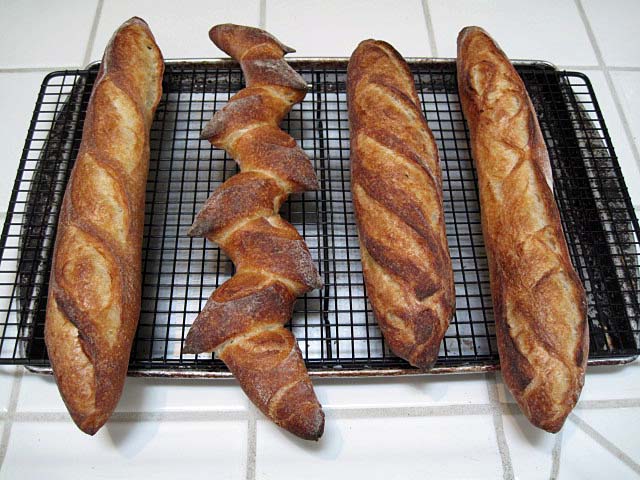 Baguettes with varied shaping and scoring

Compared to the first batch, the second had less dark crust. It was very crisp. The crumb was basically the same. The flavor was noticeably sweeter, but it still was under-salted to my taste.

These are very nice baguettes. I'll be following Pat's reports of her continuing bear hunt.

Sweet Looking Baguettes, David! I tried my first baguettes with poolish couple of days back, and they had a tight but light crumb. My mixing was to blame.

I am truly convinced that "less is more" when mixing baguette dough. Hand mixing may not be practical in a bakery producing hundreds of baguettes at a time, but it is practical for us home bakers, and it does give wonderful results.

I'm gradually coming to understand that a pinch of yeast does serve a purpose in some cases, even for the sourdough purist.

They look very flavorful with the moist open crumb and crusty crust!

for baking this up.  I was looking over my formula this morning and go back and forth about the amount of salt.  My personal taste in all food is pretty much "light on the salt"- but that's me.

I've been tweaking a bit on the temperature also and tend to agree that longer and lower does it better.

The second batch is proofing and the oven's heating. The retarded dough was a bit stickier, even chilled, but within normal limits for a 67% hydration dough and no problem to shape. I think I rather like this hydration level for baguette dough.

I generally find 2% salt suits my taste, but I bake some breads with 1.8% without objections. 1.5% is too low for me. My wife didn't notice the lower salt, but her taste for salt is for less.

I generally like baguettes bien cuit, but the first batch was a un peu trop bien cuit. I'll bake at 470ºF, I think, with steam for 10 minutes and dry oven for 10 minutes.

I have not been happy with shaped and retarded dough.  It tends to stick to my peel and I've had some "horrible loading accidents."

I find that I get the best results allowing the dough to warm up for a couple of hours and then shaping.  The dough is a bit more resistant, but usually shapes up well.

Did I mention that I usally load my baguettes diagonally across the stone and turn them during the bake?  That might have made a difference.  But the lower temperature is a good idea anyway.

Looking forward to your results.

Baking at 470ºF - actually 470ºF with steam for 10 min., then 450ºF convection bake for 10 min - gave me about ideal results. The only thing I'd like to improve is for the crust to be thinner and crackly. This might be a steaming issue. I'm not sure.

is what sold me on this formula.  Mine is crispy and flakes off in shards when you cut into the thing - even at a day old.

Of course, I'm on the high/dry prairie. I think it makes a lot of differences in how things react.

Perhaps 10 minutes of steam is too much.  But they do look nice!

Thanks for your efforts.

Your scoring is really nice and even.  I haven't tried mixing poolish and levain, but it sounds like a good combination.  The levain seems slight enough not to overpower the flavor of the poolish but maybe add some interesting flavors to the bread.  I like the crumb as well - very nice and open.

always steal from the best.  This combination was inspired by the breads from Team USA.  Yes, when they take the miche at the Coupe, I can get the formulas - but 2012 is a long time to wait...

15% of flour pre fermented seems to be my magic threshold - any more and the fermentation just isn't right.  I really feel that my altitude influences this and needs to be taken into account.  I'm always interested as to how these formulas perform at more reasonable altitudes and humidity.

Pat, what would be the effect of a greater or lesser percentage of preferment here? When you say the fermentation wouldn't be right, are you referring to the rate of development of the dough?

Also, what do you think are the effects of your altitude on your work?

Thank you for your posts and the work you out into them.

never done lesser.  So no comment on that.  Greater %'s of pre ferment tend to double too fast. Breads rise faster at 5280' because atmospheric pressure is lower - some peopl advocate making a drier dough, but that doesn't really seem right to me.

So I end up with a tighter crumb - an indication of too little fermentation.  So by adding less yeast in the pre ferments I get a slower rise.

Also there may be a balance with the acid in the levain creating too much dough strength.  I'm not sure about that change at higher altitudes, but I think it may factor in.

Also our dry climate makes dough skin over like crazy.  I hardy use any flour on the bench and I floured my couche about two years ago and it hasn't needed any since.  When I bake in more himud climates I have to be careful to use some flour or I get stickage.

Observationally, with every bread I try - if I go much higher than 15% of flour pre fermented - wham - tight crumb.  Same hands, same mixer, same oven.

This isn't scientific, but hope it helps.

And that it isn't scientific is a bonus for the likes of me. Thanks, Pat, for the guidance and useful information.

I will try this formula some time, too.  It is hard to imagine improving on the tried-and-true proth5 baguettes.  But new experiments are fun and this one will doubtless be tasty.

the 1.8-2% salt.  I'm going to adjust my bake next week to see if my bread testers can tell.  Sometimes I tune things too much to my taste...

Thinking about it, I might argue that, given the retarding temperature wherein yeast doesn't go dormant, I'm prefermenting 100% of the flour. Dough stays strong, and yields ample oven spring.

We're sufficiently pleased with the wheaty flavor, open, chewy crumb and thin, crackly crust I've stopped messing with the formula and techniques.  I'm putting my baguette making peak energy into shaping and scoring. I want my loaves to look like David's. I've got a long way to go.

Pat, I live at 82 ft. above sea level, in Florida (atop one of the state's higher sand dunes). Winter's are cool and dry, summers...lets not talk about the hot, humid summers.