Today, we mixed and baked four types of bread – whole wheat, rye, multi-grain and semolina. We also scaled ingredients for tomorrow's breads – ciabatta, challah (non-sourdough), olive, raisin-walnut and miche, some of which will be retarded overnight and baked Friday.

The educational goal of today's bakes was to demonstrate the impact of different ingredients such as whole grains and seeds on fermentation rates, dough consistency, crumb structure, etc. 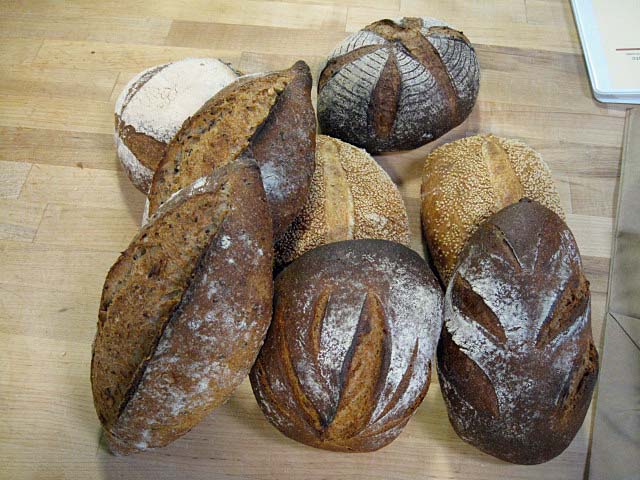 Some of my breads from today's bakes

Personally, I found the sourdough whole wheat and rye rather un-exceptional. The multi-grain made with levain was much superior to the one we made with commercial yeast in Artisan I. (It's going to be my breakfast bread tomorrow.) The semolina bread was difficult to handle – a very slack, sticky dough that fermented and proofed really fast – but was the best bread of this type I've tasted. It was very similar to the semolina bread in Maggie Glezer's “Artisan Breads,” for those of you familiar with that wonderful bread.

In the classroom, most of the time was spent discussing retardation of the 3 types covered in AB&P – basically, retardation during bulk fermentation, retardation of formed loaves and retardation and proofing in a cabinet which allows you to warm the product after a period of cold retardation. The advantages and disadvantages of each were covered, as was the types of breads for which each is best suited.

I think I learned the most in the bakery today. The highlights for me were a better grasp on a way to shape bâtards and how to make a chevron cut correctly, two techniques of which I had a poor understanding, in retrospect. 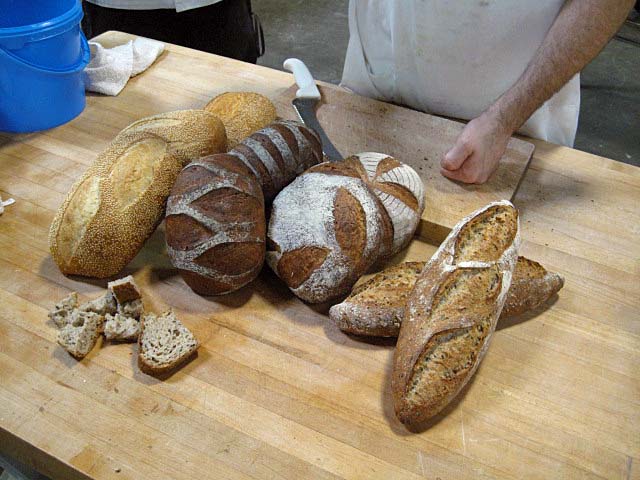 Frank's breads. He made these to demonstrate pre-shaping and shaping. At the end of the day, we sliced one of each type for our tasting and discussion. 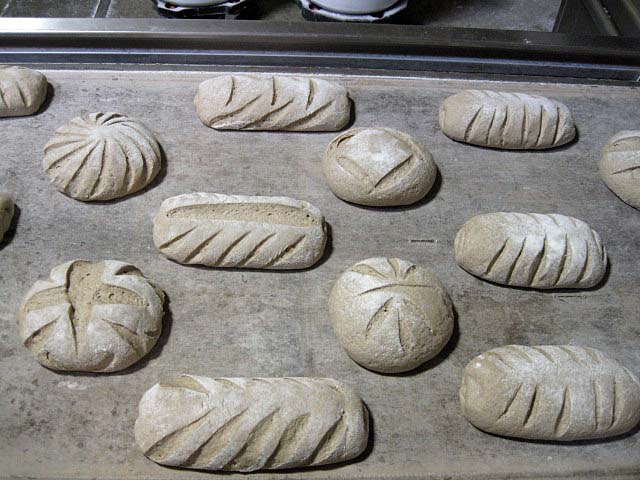 Some of the other students' ryes with creative scoring patterns, on the loader ready to bake. 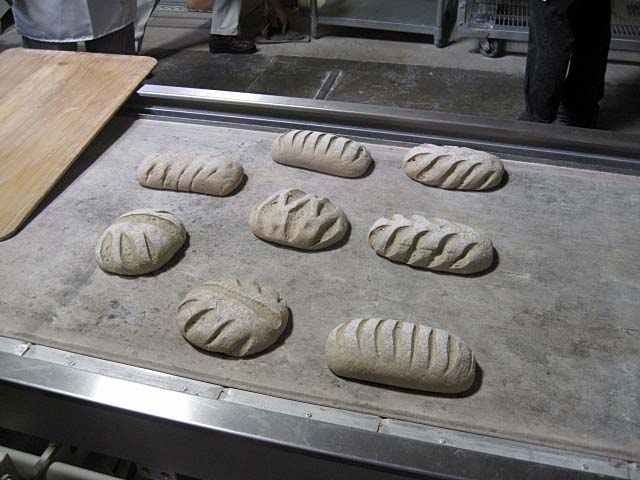 Frank's rye breads, with various scoring. (The rye breads were scored prior to the final proof.)

The whole wheat breads were dusted with flour prior to scoring. Some had a cooling rack placed over them as a sort of template before dusting which makes an pleasing design on the loaves. 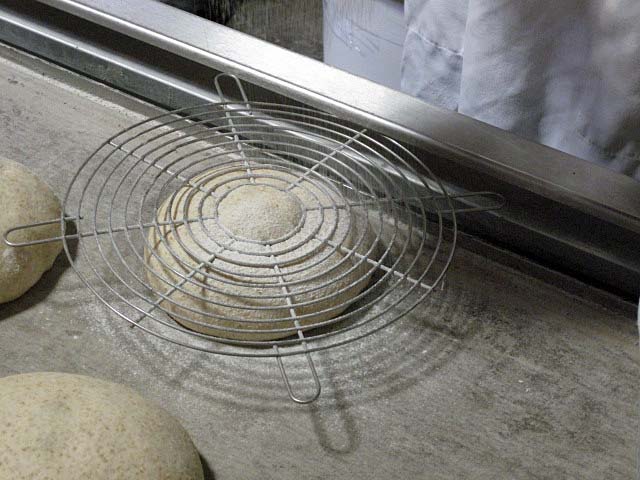 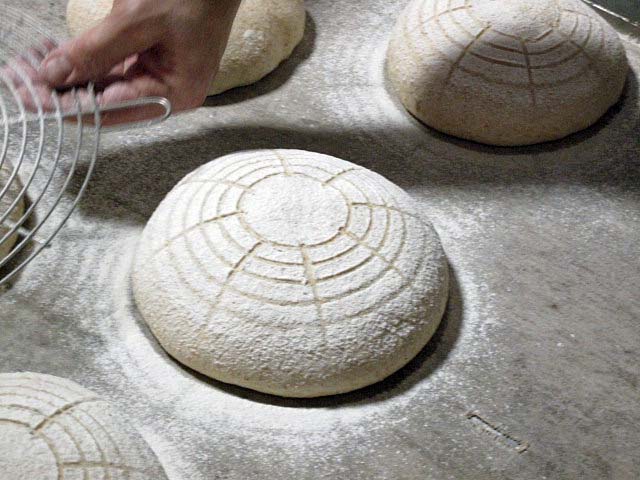 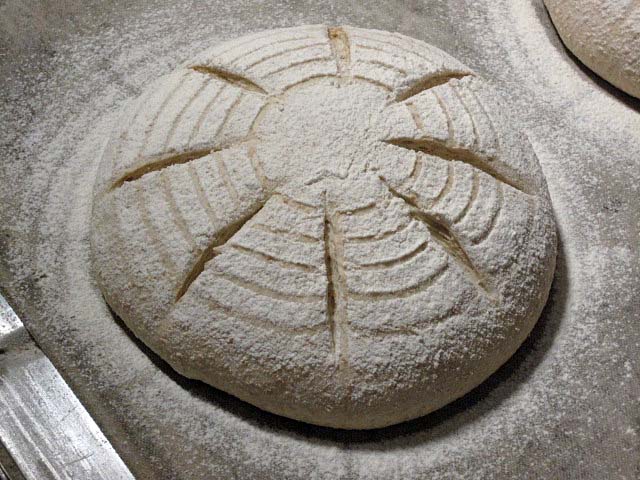 Frank also discussed more about using baker's math with levains and spoke to a question that Pat raised in a reply to my blog of yesterday. He said that, when you work with preferments like poolish, you think in terms of the percent of prefermented flour in a formula. When working with levains, you think of the levain as a percent of the final dough's dry flour. He didn't go into detail regarding the reason for this difference. I could speculate, but I'd rather try to get him to explain his reasons tomorrow.

Looking great there, David! What a nice collection of breads... what a christmas treat!

The tidbits of information are valuable, and just tantalizing enough to consider doing this myself.

I am going to keep the photos of the scoring patterns for reference.

Thank you for taking the time to do this.

Very inspiring. Do you have the recipe for the loaves in the picture? They look great to shape and score.

Yes. I have formulas for all the breads we baked.

Great looking loaves, David.  I would venture to say that your chevron-slashed loaf is the most handsome of the lot.  Thanks so much for the detailed reporting.


What was the verdict?  I am guessing that retardation during bulk made the biggest impact on flavour development.

Those are amazing looking, David.  SFBI couldn't ask for a better recruiting tool than your posts!

In fact, one of the other workshop students is a TFL member - from Portland, OR, as it happens - who told me he signed up for Artisan II because of my blog on Artisan I.

Also, I was approached towards the end of the day yesterday by a young women who is a graduate of the SFBI professional course and is now a SFBI Intern. She is also a TFL member and was aware I was enrolled for this workshop. She said very flattering things about my breads. <blush>

That comment about treating a pre ferment and a levain differently in the baker's math calculations is a stunner.  Never, ever, have I heard anything like that before (and I hear these things from folks affiliated with SFBI).  Waiting with bated breath for the explanation on this one...

Things keep getting more and more interesting and informative.  What a lovely group of loaves!  Thank you for taking the time at the end of a busy day to share!

The slashing and decorating concepts are inspirational! Bravo!

Brilliant photography.  The discussion about SFBI's baker's math calculations is fascinating - looking forward to the next installment.

David, is there a specific reason behind Frank's scoring the ryes prior to the final proof?

I think the reason for scoring the ryes before proofing is that they have very little oven spring, so they open up better if scored earlier.

would love to see a video of you doing the chevron slash to demonstrate your newly aquired skill.

I was just thinking about doing that.

Nice loaves and a great report on your further bread-ucation.

If you aren't driving back Friday night, maybe we can have a tasting.

Great stuff, David.  The loaves and slashing are gorgeous.  I would love to hear more about both the pros and cons of retardation at different stages of dough development, and the rationale behind treating preferments differently than levains in terms of formulae.

The pros and cons of the different retardation strategies were taken directly from AB&P, if you have that.

See my next "installment" regarding pre-ferment calculations.

Hello David, Thanks for posting all of the photos, showing the careful scoring and beautiful results.

I am interested in what you said about the Semolina Bread:

The semolina bread was difficult to handle - a very slack, sticky dough that fermented and proofed really fast - but was the best bread of this type I've tasted.

In class, were you using a similar formula and timeframe as for the Sesame Semolina Bread in AB&P?

I wanted to try the AB&P formula and method but have fear of overproofing, based on my experience making the Semolina from 'Tartine Bread' with the timeframes employed there (I was not successful).
I was wondering what you meant by 'really fast', in terms of time needed, for bulk fermentation and proofing.

With thanks from breadsong