and thought I could offer her an alternate method that I used when I baked for the first time using a DO. Dosi wrote me back in a private message so as not to hijack Sally's thread any further, saying she liked the idea and asked if I would re-post it on a separate thread for any other TFL members that might find it useful. My apologies to Sally for going off thread on her post.

The following is a copy and paste of my suggestion to dosi from yesterday.

"The DO that we have has a knob type handle on the lid, so of course it won't lay flat on the oven racks. I found an old spring-form pan that we never use and took the bottom part out and laid the lid of the DO on the ring of the spring-form which was just high enough to suspend the lid handle above the oven rack. This allowed the lid to sit in an even position.

This makes it much easier to get the proofed loaf into the DO, and clear access for scoring. I put the bottom of the DO over top of the loaf and baked it as per the instructions. I had to remove the top rack so there was enough clearance to remove the bottom (now the top) of the DO, but this way makes it much easier to load the dough into the DO. It seemed a better configuration to me for a bread to bake from the widest part of the pot, and give it more room for expansion on the sides. Just a suggestion, but hopefully you'll find it helpful for next time."

It may require some oven rack adjustments,but it should work for most ovens. 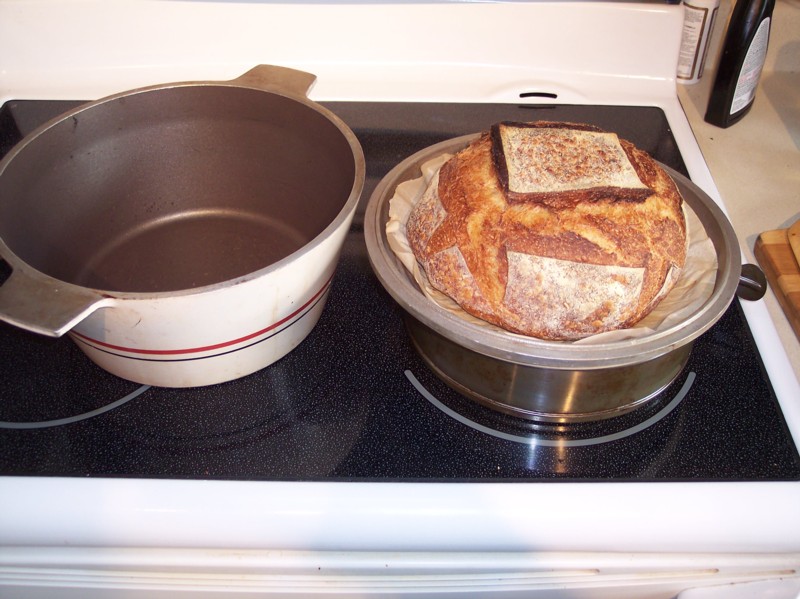 That's good thinking, and I appreciate you sharing it.  I have not tried out my dutch oven yet since I'm currently having enough trouble with the other techniques I'm working with, but this suggestion will certainly be useful when I do try the DO.

Thanks again for a great idea!   This one's a keeper for sure.
OldWoodenSpoon

Well, let me just say that I don't mind AT ALL if a thread I start gets hijacked - I find that often the msot interesting discussions start from a hijack, so go ahead and feel free to hijack my threads anytime....

you won't hurt my feelings...

Thanks for letting me know you're OK with it. It just seemed the thing to do at the time to give Dosi an alternate way of dealing with the problem she was having.

I got a laugh out of your full-steam and golf comment. It sounds very familiar to how a lot of my time on the course goes.

So simple and so obviously useful.

It reminds me of the story of NASA's early struggles to come up with a ball point pen that our Astronauts could use in zero gravity; they approached the Russians to see if they would share their technology. Without hesitating a Russian representative replied, "We use pencil."

Great idea, thanks for sharing.

I haven't heard that story since I was a kid, but it's sure a good illustration of the KISS principle isn't it?

Baguettes based on, Jeffrey Hamelman's...
Butter Cracking
Greetings from Tux, Austria
What type of fineness should be expected?
Frisian Black Bread TRB
END_OF_DOCUMENT_TOKEN_TO_BE_REPLACED