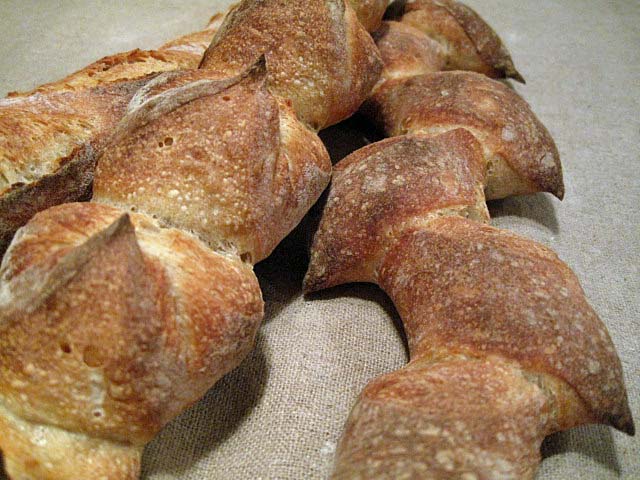 Instructions for making an épi 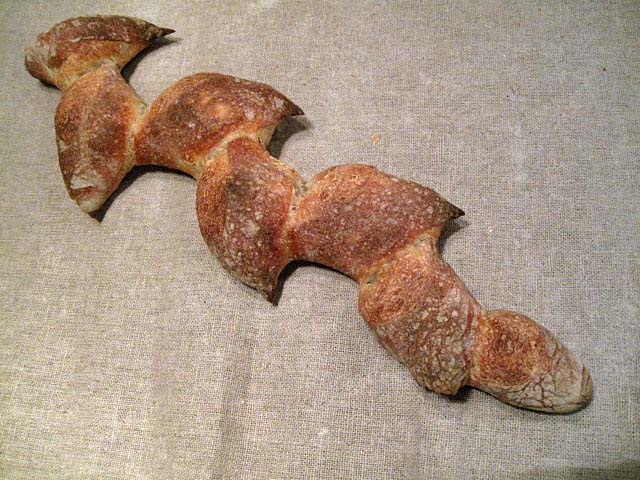 1. Shape a baguette and proof it.

2. Transfer a baguette to your peel.

3. Starting at the left end (if you are right handed) or at the far end, if the baguette is oriented perpendicular to your body, make evenly spaced cuts along the baguette with a sharp scissors. The scissors should cut at about a 45º angle, almost but not completely through the loaf. With each cut, the cut part is rotated away from the long axis of the loaf, alternating right and left.

4. Load the épi onto your baking stone and bake as you would a regular baguette. 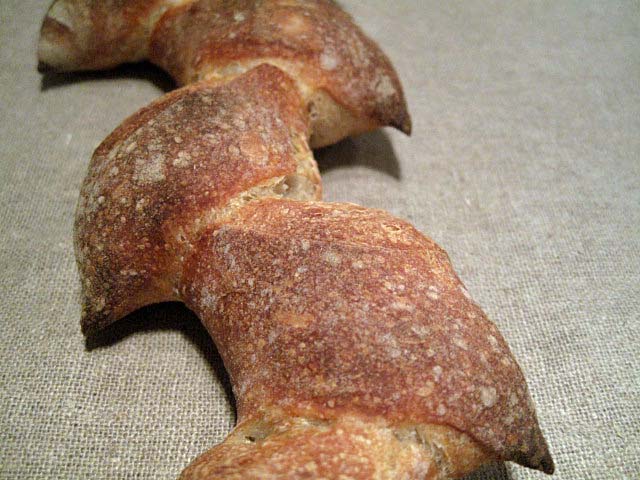 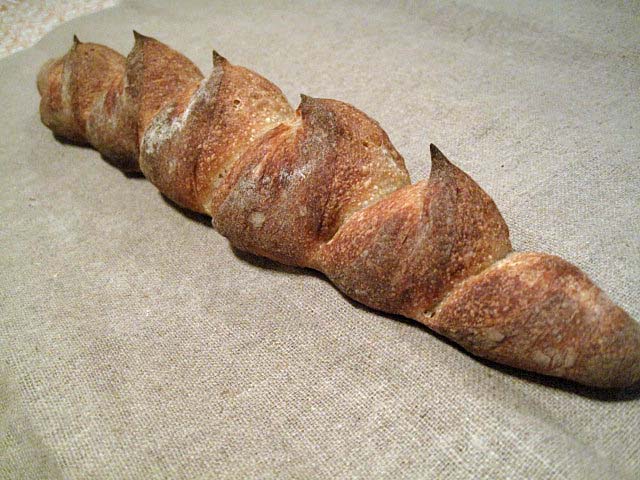 The dragon tail is made in the same way as the épi, except, rather than rotating the cut pieces, the tip of each is folded back over the body, away from the cut surface. Here is a photograph of Miyuki Togi, my SFBI instructor, forming a dragon tail: 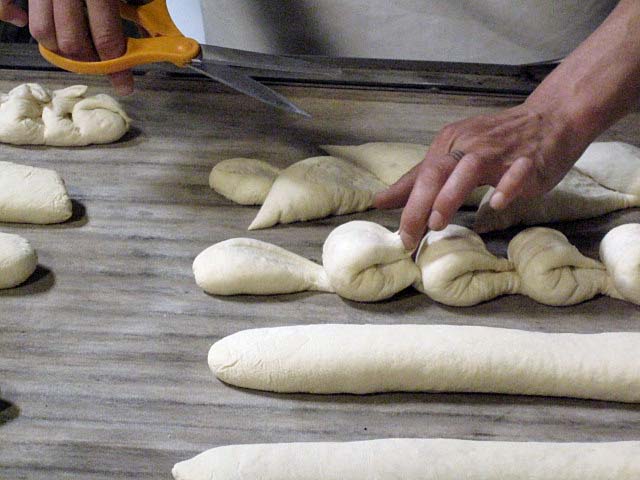 SusanFNP has made an instructional video for shaping a Dragon Tail baguette which is highly recommended. Dragon Tail Baguette Shaping Video 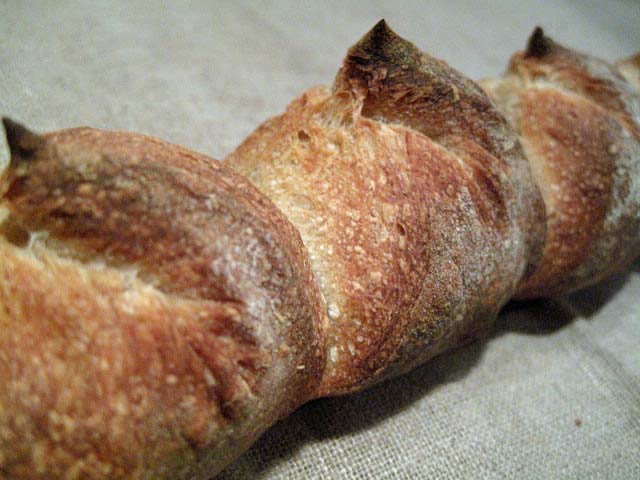 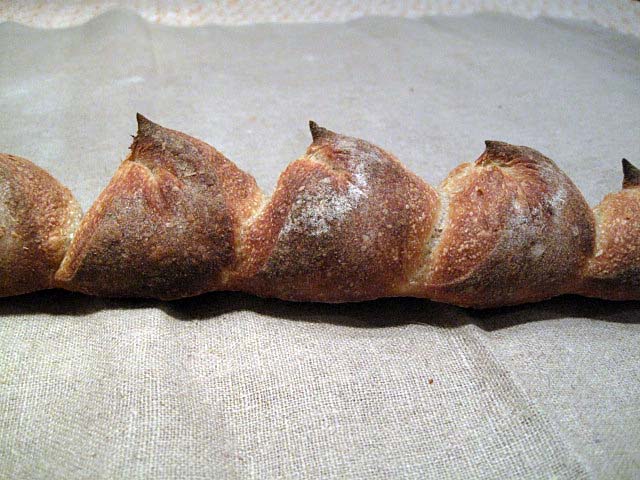 Thank you for tellling us how to shape the dough into dragon tails.  I misunderstood about the dragon tail shape.   I thought that it was just cut and done. I didn't know that it was folded after cut.

I will give it try your recipe next time.

Do look at Susan's video. I think it makes the technique very clear.

Thank you for all your help, David. I also thank you for updating your formula, too.  Your posts have been helping my bread baking so much.

I will post the result when I make you baguette with dragon tail shape!   I am going to check at Susan's video now. Thank you again,

Gorgeous baguettes.  And I know they taste good, too.

It's so easy when you know how.

Thanks for posting this , David. Alas, i'am limited to 12 inch of baguette in my new oven.

I wish I could make full-size baguettes, too. I can fit 16" loaves on my baking stone.

If limited to 12", what I would do is shape ficelles - thinner and shorter than baguettes. I think it was Hamelman who said that thinner loaves actually are easier to shape as épis, etc.

Nice crust David, is this using your regular steaming method? Or the SFBI method?

I used the SFBI method. Note: I have not tried this with pre-steaming the oven. I like its simplicity, and it seems to work as well as my previous method.

I just had lunch, but looking at that stellar crust, I feel all hungry again. Those dragon tail baguettes look particularly mean...

The dragon tail and épi are a crust lover's dream. We ate nearly the whole dragon tail with dinner last night. (My wife ate 2 1/2 sections - a record for her.) The crust was very crunchy, and the crumb was chewy. Delicious!

Beautiful bread David - you are such an inspiration. I wish I could hire you to come to Omaha for a few weeks to tutor me personally =). I had a few days off last week and made Susan's Norwich Sourdough which I hadn't attempted in a long time and it turned out nicely enough that I shared a few loaves with friends. I have also printed out your San Joaquin recipe and instructions and will try that soon. I have not yet attempted baguette shaped bread but my husband bought some nice light weight pine at Lowe's yesterday and is going to make me a bread board to make it easier to move from couche to peel. Once that's done, I'll be ready to take the plunge.

As has been said many times, baguettes are the most challenging loaves to shape. If you are making them for the first time, I recommend using a lower hydration dough. It's just easier to handle. The SJ SD is pretty sticky.

If you are already comfortable with wetter doughs, ignore the above.

Looking forward to hearing about your baguette experience.

What a great shape on that mean dragon tail...and for sharing at the table.

It's obvious you picked up some new (and good) tricks at the SFBI workshop.  The dragon tail looks particularly appealing.

The dragon tail is easy to make. It is visually appealing,  and it is fun to tear off a "roll."

Maybe by the end of this winter I'll have mastered baguettes and can try those tricks!

I went wild this weekend and worked on baguettes at 68% hydration.  Hopefully I'll have some time ot write it up...

Such lovely shapes and gorgeous crust! 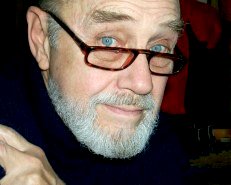