Hi everyone in TFL-land. I finally created an account after several months of browsing this site. I've been trying to replicate a certain type of Liege waffle at home, but I can't seem to get it right. Has anybody tried Liege waffles from the "Le Waf" stands located all over Lake Tahoe ski resorts? They're eggy, buttery, rich, and coated in a beautiful caramelized sugar crust. I believe they're a lot richer and sweeter than authentic Liege Waffles, and they're ridiculously good.

Here's a photo of the dough resting 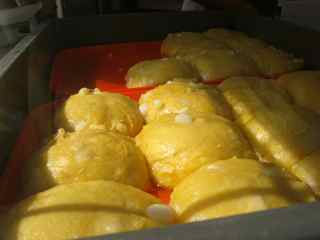 Here's a close-up of the crust 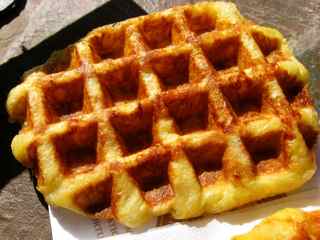 and here's a shot of the crumb: 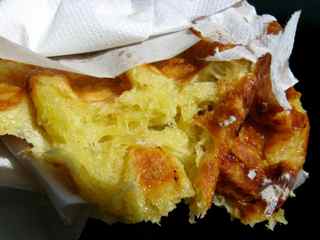 I've tried a brioche-type dough to recreate the texture, but the crumb was too soft and finely textured. I then tried a laminated dough method, which came close to the striated texture, but didn't taste nearly as rich or buttery as the original version. The original tastes like a butter, egg and vanilla explosion. Additionally, I had problems melting the pearl sugar. The latter problem is probably due to the fact that I have a cheap aluminum plated waffle iron that heat-cycles and therefore does not reach the necessary temperature to melt the sugar.

Does anyone have any advice? I'm not sure how widespread Le Waf products are. They used to allow mail orders of their products, but I called their CEO, who says that they're concentrating on their retail stores for now, and that it may take years for them to revamp their mail order business.

Those look so good! I found this article that might help.

There is a very good chance you might have mastered the art of Liege waffles by now, but I just wanted to point out that the pearl sugar (inside the waffle) isn't supposed to melt, only the outside lumps that come in contact with the grill. It is made to retain its form during baking and that's what makes a Liege waffles a Liege waffle.

The particular ones I referenced in this post make a point to have some granules sprinkled on the outside to get the caramelized crust, and the granules imbedded in the dough remain unmelted to provide the trademark crunch, just as you described.

After much contemplation, I made a batch using this recipe. I purchased the pearl sugar online 2 or 3 months ago.

I deviated from the reecipe by using some starter. I made a stiff levain and after it doubled in bulk I scooped out a generous tablespoon full and went forward with the recipe. The bulk fermentation was about 8 hours in a very warm room, followed by the called-for retardation in the fridge.

I went wrong with the pearl sugar. I was able to knead it into the dough by hand, but I let it rest about 6 hours in the fridge. When I removed it to divide into 5 pieces, there was a puddle of liquid at the bottom of the bowl - I tasted a bit and it was sweet, apparently the pearl sugar drew some moisture and dissolved. uUgh.

Well, might as well move forward so I divided it and let the smaller pieces rest in the laundry rooom which is quite cold (poorly designed, 1960s era home).

I fired up my Belgian waffle iron this morning, took one of the dough balls (that had risen ever so slightly overnight), pressed in a small spoonful of pearl sugar, and placed the ball in the iron.

The result was quite nice. Coming off the iron the waffle seemed to be limp/floppy but after it cooled for a minute or two the sugary outer crust hardened nicely and the waffle stiffened. The waffle was very tasty and I enjoyed one with a cup of coffee.

My daughters also had some for breakfast and they both enjoyed them. My wife had a bite and said that she thought they were good (she has some gluten tolerance problems so all she could have was 1 bite).

The next time I make these I will only knead in the pearl sugar when I'm definitely ready to  cook within 1 or 2 hours afterwards.