What on earth happened?!

What on earth happened?!

I decided to make Daniel Leader's French Country Boule, in his Local Breads book, and I ended up with something that looks like this: 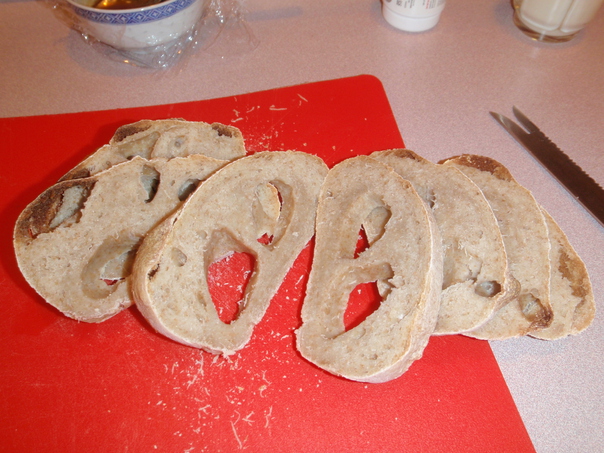 What on earth happened?! The flavour is good, but the texture is horrendous...If it helps at all, this is what I did with the recipe.

I didn't visit your blog, but reading this thread may help you determine if it was an error in the formula.

Here's another thread which talks about those large tunnels

Do  you have a photo of the boule before you cut it?  There appears to be a very dark section or two on a very light crust and I wonder if your oven is heating evenly.

On the bright side, a tunnel would make an ideal spot to hold an egg for a breakfast treat of egg in toast.

Almost the exact same thing happened to me when I tried to make Daniel Leader's Pane di Altamura. A very dense bread with huge holes, just like yours.

I never could figure out what I did wrong.

I sadly don't have a shot of the crust pre-slicing. I can describe the colour of it as quite pale, and I believe that there wasn't enough steam, and the oven wasn't hot enough when I put the bread in.

I looked at your blog (very nice by the way), and note that you had issues with incorporating the levain/starter into the autolysed dough. In one of Peter Reinhart's books he talks about how to incorporate pre-ferments by cutting both the pre-ferment and the dough into cubes and mixing them like epoxy. I think this technique might help in getting your levain distributed properly. The proportion of levain is quite high in this recipe (to my way of thinking anyway), and will give a pretty fast ferment. But if it's not distributed properly, the rich area will starve due to no food and the poor area will not rise because there's no leavening agent.

It looks like the bottom of the loaf did not have any yeast at all, just a dense paste. The top of the loaf received all the levain, but it quickly used up the little flour up there and wasn't able to provide much lift. The big holes I suspect might be a shaping issue becasue they don't look like a product of fermentation, particularly if you achieved good gluten development as verified by the windowpane test. Finally, I think the dark spot on the crust is simple another bubble, this time on the surface, that heated up much faster than the rest, and turned brown.

Give it another try and let us know how it turns out. You might also ferment in a straight sided container to know that it really is rising.

That sounds fairly close to what I'm thinking is the issue as well, except that I had added a stretch and fold at the one hour-ish mark because I had suspected that I didn't mix the dough long enough in the mixer. Could it be possible that during the stretch and fold that I had accidentally trapped a giant air pocket in the dough?

I think it's likely you did exactly that, since it's easy to incorporate air during a stretch and fold. If your purpose were to create a big bubble, you'd stretch a big panel of dough and enclose a volume of air with it, just like a stretch and fold.

The SnF is intended to develop the gluten, not to mix the ingredients. Incorporating two materials of different viscosities is difficult because there's not much friction between them. The cut and blend technique (PR's epoxy) is one solution. An alternative is to add the thin levain slowly to the mixer as it's working the thick dough. There's a French technique called bassinage that adds water to a mixed dough, and everyone agrees it's difficult to do. For that matter, the inital autolyse could be skipped and the levain mixed in at the beginning. Not the same recipe, of course, but it would prove the proportions are OK.

I re-read your blog and notice that you did indeed ferment in a straight-sided container, so apparently you observed the dough doubling. If the levain was unevenly distributed you might have had one part that was overprooofed as Mini suggests, and the other part 'pain morte' with no yeast activity.

I was wondering if there might be some use for this technique. In Mexican pastries there is a concha made with two kinds of dough, and I think Japanese melon bread has a similar kind of construction. In any event, save those pictures because I doubt you'll ever be able to duplicate that bread.

I suspect there is overproofing involved.  The dough just started to wear out > dough getting quickly soupy > pale loaves > very heavy packed crumb in combination with large holes.  If the temp is warmer than 74°F and the longer of the fermenting times is used, then there is a good chance it was overfermented.  There was a high portion of sourdough in the dough so I would have suspected the dough to be in the oven in less than 4 to 6 hours from mixing.  Then it was tucked into the fridge at a rather late stage.  It could very easily be that the first ferment was too long throwing the second one off.  Could this be the case?

The house temp was probably about 22-23*C since it was raining when the dough was fermenting. I also opted to only ferment for the 2.5 hours as recommended in the book since I knew I was going to stick the dough in the fridge.