This morning I made two batards from the recipe, tweaked a bit.  One of the things I did was replace 100 gr of AP with semolina. I like the taste of semolina and it comes thru.  One I put a little rice/AP mixture and slashed, the other after putting the mix on, brushed with egg white/water and put sesame seeds on, right before putting in the oven. Both rose OK, the sesame one collapsed a little in the middle, and either the cut was off which is what I think, or the egg wash being very cold deflated it a bit, as once before happened to me with a different formula.  On that one it deflated the dough a lot.

I used the pre-heated stove/stone, put dough on stone and covered with a warmed only by hot water SS bowl method.  Baked for 10 minutes, covered and then baked for 14 minutes more.  It worked OK, well better than that probably. I'll know more tomorrow after I've eaten more. I just wonder how much better it would taste, if at all, with the water in the hot pan to make steam method ? This was only my second time baking bread with no steam and the first time doesn't count......

I am hesitant to commit to the "magic" bowl method forever.  I like the idea of creating steam, its feels like a science thing to me.  AND I am hesitant, as good as the bread tastes, to stop mixing and working extra (as opposed to the no mix method) making formulas.   After all, isn't the doing that gives us as much pleasure as the eating ?  It tastes good now, however I always wait a day for a final taste judgment as it seems a lot of breads get more flavorful in a @24 hour period.

Having said all that, it is absolutely extraordinary to me that no mixing, except to minimally incorporate the ingredients together could turn out such a...such a..uh uh....BREAD ! 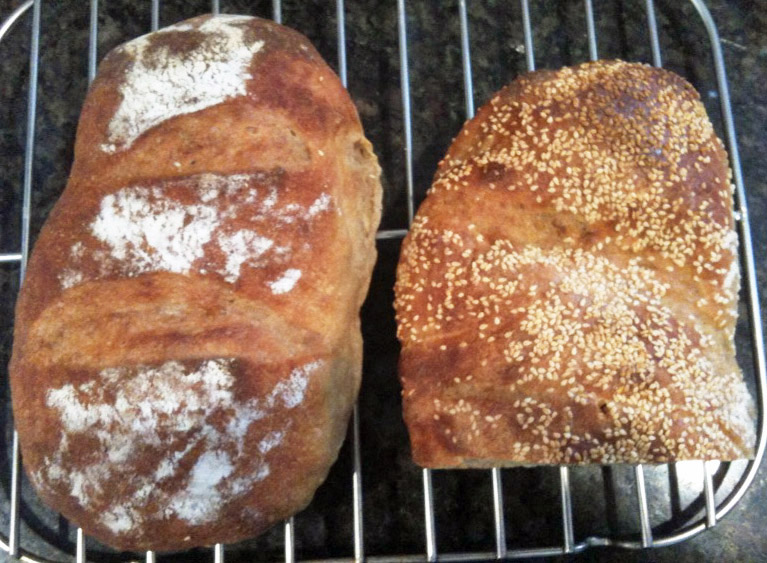 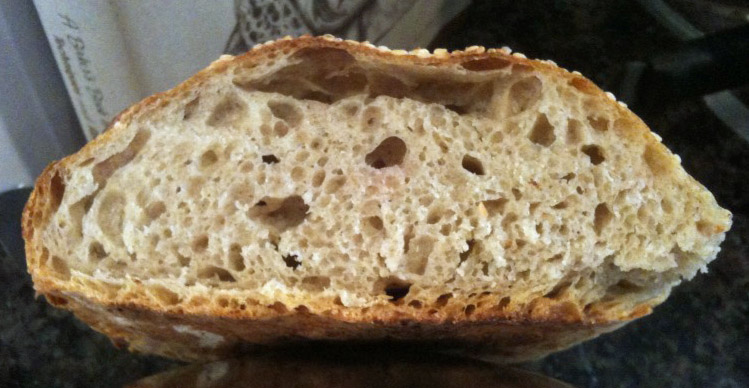 Note, it DOES taste good even though it looks like it does.....I'm still a novice.

I wouldn't be so concerned about how it looks (it's fine to me) but the important thing is that you made your own bread (and like how it tastes).

For me, I think that this method produces very, very good bread with minimal effort.  With my schedule, this has been the only way that I can make any bread over the past couple of years.  I've made some tweaks to the method that works for me.  Including:

1. Using less yeast.  I use instant yeast and use about 1/3 of the amount of yeast specified in the book.  Of course, the rise times and proof times end up being a somewhat longer because of less yeast.  I still get pretty rapid rise but for me a bit less yeasty bite.  Others have used even less yeast (with much longer rising times) for even better results but I'm not patient enough.  So, about 1/3 of instant yeast has been a good compromise for me.

2. After the initial room temperature rise (now closer to 4 hours), I actually very briefly knead the bread with about 30 seconds of turns in the bowl.  Then I store the dough in the refrigerator.

2. Proofing in the refrigerator.  Works well for my schedule.  It also makes bigger holes and is very easy.  The ABin5 website details this.  Briefly, after shaping the bread (and I had to learn to be extra gentle), I put the dough on parchment paper on a tray, spray some plastic wrap with Pam, and cover the dough (so it would not dry out).  I've done this refrigerator proofing for 12 to 18 hrs without problems.  The ABin5 website details this.  When you bake a refrigerator-proofed loaf, preheat the oven for 1/2 hour at 475 (not 450), slash the loaf and put the cold loaf right on the preheated baking stone.

I'm sure others here have their own tweaks but I have been very happy to use this method.

Sorry to resurrect this ancient thread but I was searching for an answer to this question and it seems this comment implies an answer:

"After the initial room temperature rise (now closer to 4 hours)"

I think that the recommended 2 hours bulk rise is probably a fine estimate if one uses the same about of yeast as the recipe calls for and one's household temperature and humidity is "normal" (whatever that means).

But it's also clear that instead of watching the clock, shouldn't one be able to "watch the dough" and see a physical change to indicate when the optimum time is to move it to the fridge?

I don't think it's as simple as "when the dough doubles in size" right?

What are the visual indications that further rise time in the tub on the counter top is not needed?  (I realize the recipe says you could leave it out overnight if the recipe doesn't have things like eggs in it.  My goal is to not move it to the fridg too early and I'd assume that two hours might not be enough on a cold day, etc.)

Thank you for your comments 2 questions please:

Why the extra knead in the bowl, for what effect ?

I've also read in the author's website, that a suggestion for obtaining a sour dough taste, is along with the reduced yeast, any bits left over from the previous mix, leave for the new.  That sounds right, have you had any experience with that ?

Why do I do the brief turns (30 sec knead)?  Just to make me feel better.  It is just weird to me about no kneading.  So, it probably is not necessary but it is very short so I suppose I just do it out of habit.

The website has lots of suggestions, tips, etc.  I like their method of reincorporating some of the old dough into a new batch using a stick blender.