I don't want to hijack Kathleen's thread any further so I will Blog about my first attempt at at sourdough starter.

It's day four about 4hours before I was scheduled to discard all but 1/4 cup and start feeding 1/4 cup water & 1/4 cup A.P. flour. Two TFL members who's advice I respect felt that the starter had already peaked so I fed Slow Moe early. On a whim I used the discard in a formula for white bread I have been making regularly. We will see how it turns out. Here is Slow Moe two hours after his first white flour feeding He is growing nicely! I will give him a stir before bed and feed him tomorrow. 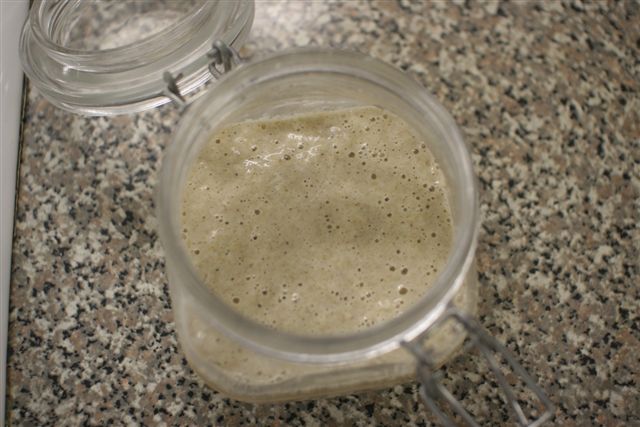 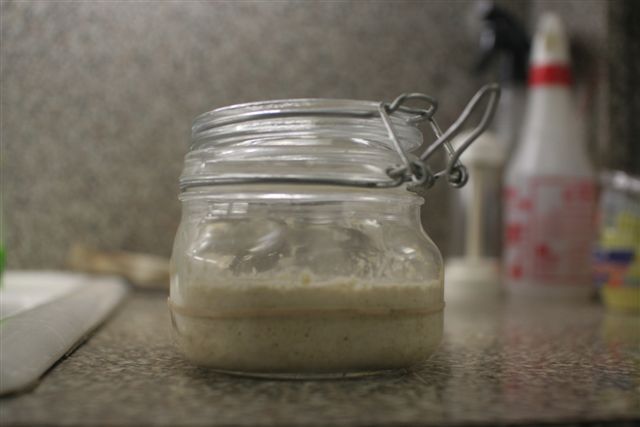 I checked on slow Moe at around 7:00P.M. Last night To my surprise the bubbles were gone and he went completely flat. Oh my! I gave him a stir he smelled pretty much the same. Not a bad smell at all but hard for me to describe. I gave him another stir at 10:00P.M. At 8:00A.M. this morning There was no change, smell was not unpleasant. No activity at all the mixture looked very thin. I decided to go on my gut and feed slow Moe again. Happy right after his second white four & water feeding Slow Moe was bubbling once again. I was so perplexed that slow Moe was inactive I did not take any photos. Here he is at 10:20A.M. today. That's my boy! 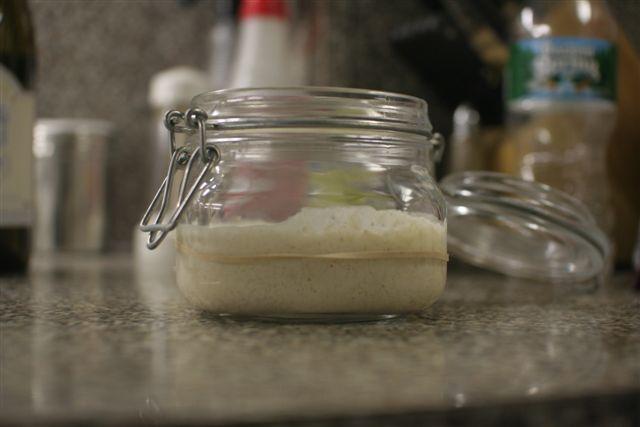 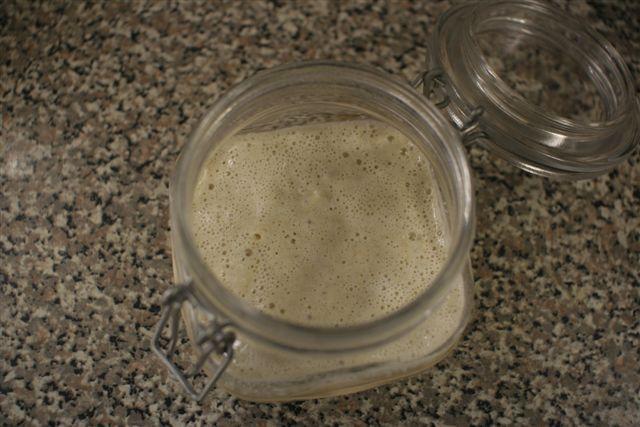 Here is aside by side crumb shot of the bead I made using the discard from Slow Moe before his first white flour feeding, and whats left of a bread I made Sunday. I used the exact same procedure on both. Except I used only 1/2 teaspoon of yeast on the slow Moe bread. After setting aside 1/4 cup of slow Moe I weighed the rest at 64grams. I assumed a 100% hydration so I add 32g less water and 32grams less flour in the finale dough. You can see that the Slow Moe bread has a more open crumb. Nice! I would not expect a very open crumb this being a very low hydration dough. I can not say for sure if it was Slow Moe that made the difference, But I can not say it was not. 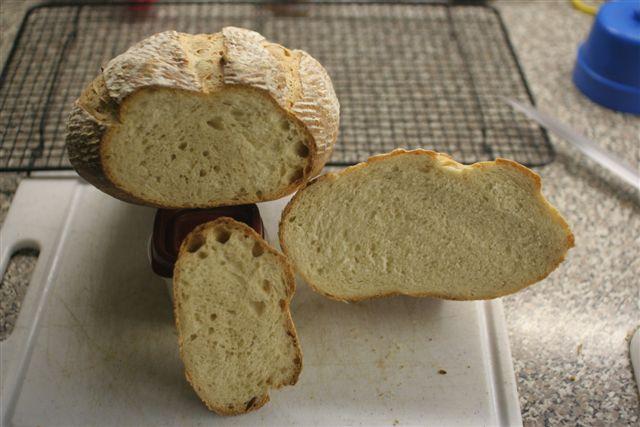 I was busy most of the afternoon today, work sometimes gets in the way of my hobbies. Slow Moe looks like he needs a feeding. Very liquidity and not as many bubbles. discard all but a 1/4 cup and fed a 1/4 cup flour and a 1/4 cup spring water. At the next feeding in 8hours I am going to use grams instead of volume. I am going to a three times a day feeding. Seems to me Moe is going though his meals quite fast!

Here's a photo before his 4P.M. feeding. 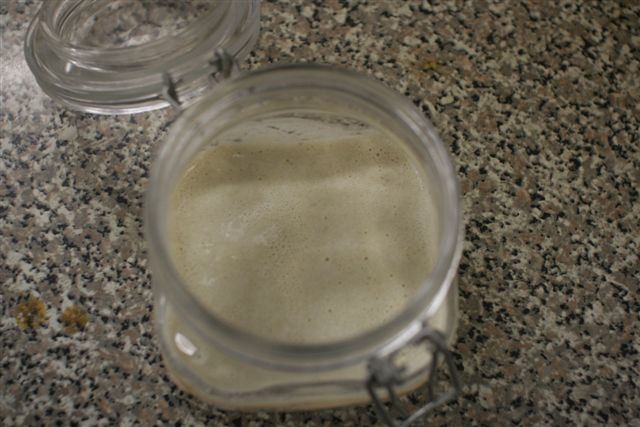 Last night at 11:00 P.M. It looked to me like slow Moe had peaked again, and began to reseed. Remember This is my first try at this so I have no idea how it should smell or look like I am going on my gut. Moe had a nice smell but I could not put my finger on it. So I asked my wife to take a whiff. It took a min. to convince her then she did. She said right away it smelt like beer. This made me very happy. OK so now I took about 58 grams of Mow mixed with 58grams of water and 58 grams of flour. Mini help! right after I mixed it up it lost that nice smell. It just had a faint smell of flour. I checked in on Slow Moe before I went to bed some small bubbles he had  no smell. Boo Hoo. So now Moe is a lot thicker I was using 120% Hydration without knowing it. ( Thanks Mini) I think I may have slowed the process down with my enthusiasm. Its been 12 hours now and there are bubbles but not near as much as yesterday and still no nice aroma. I am going to stir him once or twice till tonight then feed him in another 12hours. 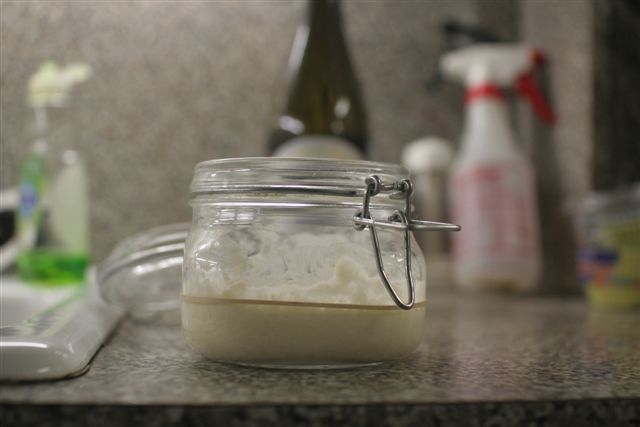 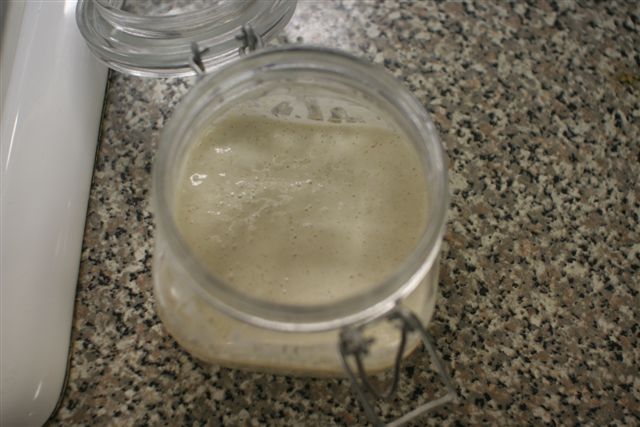 Hey! Congrats on starting a starter! In no time with some love and care it will be ready to help you bake some wonderful, tasty loaves!

Except that container looks a bit small, you may want a larger one...?

If it works for you though, keep it up! It does look great and active!

Since you have a scale, stop using cups.  You cannot assume 100% hydration with cups.  It is closer to around 120% hydration because a 1/4 cup of water weighs more than 1/4 cup flour.  So you can give it a little bit more flour so moe keeps bubbling.  A thin starter will not rise much.  Use the scales.

Nice little loaf you got there.

Thank you mini, to  be around a 1/4 cup how many grams of flour and water should I add for a feeding? I think I am going to start feeding at 8hour intervals.  at a ratio of 1:1:1 unless you tell me otherwise.

EDIT: I think I fig. this one out myself while feeding Moe just now. I weigh the 1/4cup full of starter then add the same weight in water and flour. Correct?

8 hours is too soon.  Only when it peakes under 12 hours do you switch to 8 hour feedings. (three times a day!)  I would stick to 12 hour regular feedings but as it gets stronger then double the flour food amount.  By watching it, you can time it and judge its strength with each feeding.

Yes, correct.  Weigh the starter and then add the same weight in water and flour.

Will, as prolific a baker as you are, you are going to have a blast baking with your captured yeast. I've had my starter for about 4 or 5 months now.  There's times it's abandoned for 3 or 4 weeks at a time in the back of the fridge, but he always comes back to life.  Now that I'm making 1-2-3 bread every week w/ discarded starter...my starter is fed more regularly.  I'll look forward to your posts on your SD bakes.

Hi Will, enjoyed the info,  and the wisdom attached to your post. Did you use pineapple juice to begin? I know there are other ways.  Ray

Hey Ray, Do you remember that bit from saturday night live? Anyway I digress. Yes I used sour dough ladies Instructions from the lessons page. I am about to post an update. So stay tuned The saga of slow Moe continues! LOL I kill me.

That will be great Will. I'll stay plugged in. Ray