Almost all the breads I bake are sourdoughs, but there are two non-sourdough breads I really like – Cinnamon-Raisin-Walnut bread and a hearty 100% Whole Wheat sandwich bread. Whole wheat bread is my bread of choice for tuna salad or egg salad sandwiches and for nut butter and jam sandwiches. It's one of my favorites, toasted, to accompany eggs, although it has stiff competition from San Francisco-style Sourdough bread and un-toasted Jewish Sourdough Pumpernickel (with cream cheese).

My favorite whole wheat bread has been the “100% Whole Wheat Bread” from Peter Reinhart's “The Bread Baker's Apprentice.” It uses both a poolish and a soaker and is essentially identical to what Reinhart calls the “foundational bread” in his later-published “Whole Grain Baking” book. It incorporates what Reinhart calls “the epoxy method” in the later book.

These books are widely available, so I will not duplicate the formulas here. However, Reinhart offers a number of options, and I will tell you which I used for this bake.

The Poolish in Reinhart's BBA formula isn't really a poolish in the classic sense of a 100% hydration mix of flour and water with a little yeast. In the WGB book, he calls it a “barm,” and it's not really a barm either, as I understand the strict definition. I suppose you could call it a “sponge.”

The final dough uses fine ground whole wheat flour, salt, honey and instant yeast. No additional water is added in the formula. An egg and 1 T of vegetable oil are optional. I used the egg but not the oil. The honey I used was Orange Blossom honey.

Using these ingredients, the dough was considerably drier than it had been when I had used water (rather than buttermilk) and all bulghur (rather than coarse ground WW and bulghur). I ended up adding about 3 T of additional water during mixing and still ended up with a rather stiff, barely tacky dough.

Fermentation to doubling and proofing to almost doubled took about 75% as long as the recipe specified. This was because my kitchen was 80F yesterday. 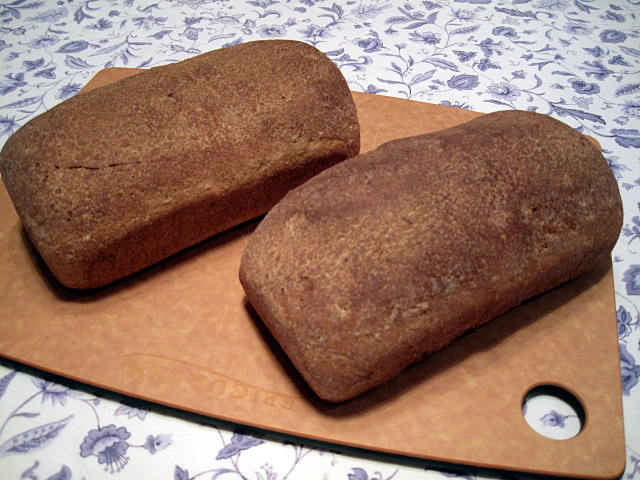 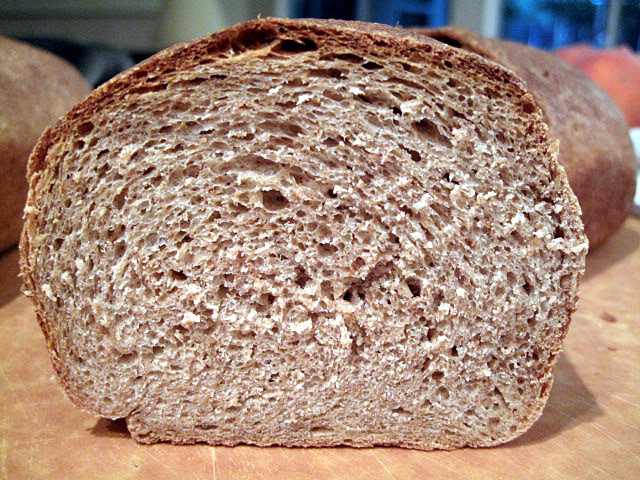 This is a very flavorful, somewhat dense yet tender bread. The flavor of red whole wheat predominated, but the Orange Blossom honey flavor was very much “there,” too. If you pay attention, I think you can also taste a tangy overtone from the buttermilk. I tasted some just after it cooled and had more toasted with almond butter and strawberry jam for breakfast. It's still a favorite.

I am curious how I would like this bread made with white whole wheat, and I'll probably make it that way next time.

Good Morning, David: I have a problem with WW with Soaker breads, in terms of getting any sort of decent looking loaf profile in cross section, and anything but a very heavy crumb. It's bugged me for a couple of years.

I'd like to try to bake this particular recipe, make two loaves out of it just as you did, and see if I can get something that resembles your loaves. It would help if I knew what size pan you used. While the photo is beautiful, I suspect that the loaves are not as long as they look.

So -- what size pan are we looking at here?

This is not a "light" bread. I think if that's what you want, you need to use less than 100% whole wheat.

No, I'm not looking for light. Your crumb looks just fine to me.

I am on a mission to get these "soaker" breads right, and while I have a good example to shoot for in your recent bake I thought I would try to reproduce it as far as I could, then play with it after I had success in copying you. So having the right size pan was the only bit of information I didn't have.

We shall see. I am perfectly happy with everything else I bake (or can figure out what I need to do to improve) but this type has so far eluded me.

Thanks for in information. I plan to start it tonight.

It actually is possible to obtain a 'light', 100% whole wheat bread:

I plan on trying this same recipe with white whole wheat flour. Yours sure looks good.

I haven't tried your staged flour addition technique yet, but it's on my "to do list."

It looks like you got a really nice crumb despite the dough being stiff as you describe. But in hindsight do you wish you had added even more water? I'm wondering at your use of the term "straight dough" for this bread. My understanding is that it refers to doughs without any preferments? Anyway, whatever you call the method, a couple of really nice loaves there!

My crumb looks pretty much like that in the photo in BBA, and Reinhart describes the dough as slightly tacky, so what I got might have been pretty much what Reinhart intended. Note that I did add some additional water (about 3 T).

Hmmmm ... I think you are correct regarding my error in terminology. So, is there a general term for non-sourdough breads?

as usual david, i love your work with breads.

anyway, it's look little white for me, isn't? i mean because of the buttermilk.

i've tried 2 weeks ago mixing bread with cream (as hydration), it was good. i'll try this one tomorrow.

The photo does make the crumb look a bit lighter than it really is. I don't think the buttermilk had much if any effect on the color.

to me, is a challenge. Your loaf looks very, very nice. Crazily, I tried a mostly whole wheat from "The Enchanted Broccoli Forest" a Moosewood cookbook(Molly Katzen). Are you familiar with the name, or is it an East Coast thing? In any case, the cookbooks are from a wildly popular NY vegetarian restaurant established in the 70s. I don't think they know anything about baking bread, though.

I tried their "Vegetable Flecked Bread". It was murder to knead, really stiff. Because of the vegetables incorporated (zucchini, red pepper, red onion, carrot, bean sprouts),and so many other ingredients, like honey, butter, lemon juice, I was hesitant to add much liquid. My crumb for the loaf looked much like the bottom 1/4 of your loaf, very dense (please, not an insult). It tastes and smells really good, but it reminds me of a german rye that needs to be sliced extemely thin, but crumbles if sliced that way.

I know, seeing the recipe would help, but the bottom line is (it's extemely long)... Is there any way I can start to decipher it? 2 c of white, 5 c of WW, 1 c of water and then the other(very liquid) ingredients.

Oh, yes. We've had the Moosewood Cookbook since shortly after it was published. Moreover, my younger son and his wife went to grad. school at Cornell, and his wife is a vegetarian. They have eaten at the restaurant.

Vegetarian food can be so delicious, it's a shame. If you want wonderful vegetarian cookbooks, I recommend "The Greens Cookbook" and "Fields of Greens," both from Greens Restaurant in San Francisco. It's a wonderful restaurant, on a wharf with views of the Bay. Their pizzas, omelets, vegetarian chilies, soups ... Yum! All fabulous. Oh! And their breads and pastries at the restaurant are also outstanding, although I've never baked any of them myself.

Anyway, I've made the 100% Whole Wheat bread from BBA several times as pan loaves and the "foundational bread" from WGB as a hearth loaf. They are substantial, for sure, but not brick-like in the least. I don't have much experience baking other WW breads, but I've never had any from bakeries I like more. Hmmmm ... There was that whole wheat roll I had in Amsterdam. I sure wish I had a recipe for that one!

was the recipe that started me on the Moosewood quest. Guess it's one of their  stellar moments. I wonder what kept the publishing company pursuing them. They've printed 2 or 3 cookbooks with substantial circulation. I can't believe it's the almighty buck, they've been around too long, not much interest.

So, you have no idea either how to incorporate vegetables into breads? Guess I can keep trying it out.

I will look for the "Green's Restaurant" cook books.

Ohhh ... I didn't understand that that was your question.

I've no experience. I'd direct the question to Shiao-Ping. She seems able to figure out how to incorporate anything edible into bread. I'd think you would want to do something to control the water content - pre-cooking, salting and squeezing dry.

... for sandwiches and toast!

This does make delicious sandwiches and toast.