After many tries for the right recipe, I just found this recipe on TFL search and baked it this morning-- it is the best ciabatta recipe I could hope for!  The directions were clear and the result was completely as advertised...Thanks, you made my day!

Forgot to tell you, the recipe is "Jason's Quick Coccodrillo Ciabatta Bread"

Thanks, I wasn't quite sure how to capture the link :-)  paulav

You're welcome.  To capture a link, just go to the page you want to link with, copy the URL from the top of the page (highlight, right click + copy) and paste that information into your post.  The forum software will do the rest for you.

OK, willco that in the future (it just looked like too long a link)  paula

I have been making Jason's recipe with variations for some time.  It is very forgiving and produces excellent results every time.  I have flattened it into pizza, folded in extra ingredients, used fresh ground whole wheat flour and cooked it over a campfire -- all to the raves of my tasters.

Recently, I started doing it almost no knead with no mechanical mixer.  I stir the dry ingredients thoroughly, then stir in ice cold water and let it rise over night.  (We are camping in the mountains so it is very cold at night but I still put it in a cooler to slow the rise.)  In the morning, I (wet) stretch and fold it a couple of times before dividing it for the final 40 minute rise.  Each loaf is wet stretched again before baking one at a time in my camper oven.  I have a pizza stone in the oven to help hold temperature constant.  Each loaf gets 25 to 30 minutes at roughly 500 degrees ( we are at 7000 feet here.)  The results are just fantastic -- big open holes, chewy crust and wonderful flavor.

Thanks for all your info regarding Jason's ciabatta - yes it gave my imagination a little kick also.  I'd like to make it into individual cheese rolls or add herbs- what else do you like to add?  It actually reminds me of a nice English muffin in texture.

What do you mean by "wet stretch"?  paulav

I have flattened this dough into pizza or near pizza shapes and just shortened the bake time.  I have added slivers of garlic at times, nuts, whole grains and raisins at other times - it all worked.

I've forgotten where I learned to wet stretch but I am sure it was a video from TFL.  Anyway, instead of working with floured hands on a floured surface, I work with wet hands on a wet surface.  Much less mess and very little clean up.  Lately, I have been spreading a film of olive oil on the work surface.

Good luck and keep us posted on your experiments.

BTW, the reason I started the no knead process is we live about six months each year in a fifth wheel camp trailer and did not want to pack a big mixer.  Last night I started the rise for an hour on the counter and then left the dough in the ice chest over night.  It worked great and this morning I baked four wonderful loaves.

Also, just for completeness, I bake this bread on parchment paper on a pizza stone in whatever oven is handy.

Thanks for all the tips... Yes, I guess that I do use the wet method, usually when rolling out one of my favorite soft roll recipes- didn't know it was called that.

The parchment paper is the only way to go, no matter what you're baking on!  Happy camping,  Paulav

I'm relatively new to serious bread baking. I made Jason's ciabatta several times now and it comes out great.  My question is this; in my family, my mother-in-law makes Italian beef sandwiches and serves them as a New Years Eve tradition.  I think this ciabatta recipe would be a great alternative to the rolls that we typically use.  But I feel the 95% hydration formula is just too wet to shape and make a good roll.  Does anyone have any suggestions as to altering this formula for rolls?

Any help would be appreciated.

I changed up the formula to a 75% hydration ratio and did a 50% KA AP flour and 50% semolina. I let them rise for 3 hours before pre-shaping them. Then after the second rise I rolled them out to my final shape and inverted them on a silicone line baking sheet for another 15 minutes.  I baked them at 500 deg for 20 mins. The rolls came out pretty good. The crumb wasn’t as airy as the 95% mixture, but for me it is a good trade off. 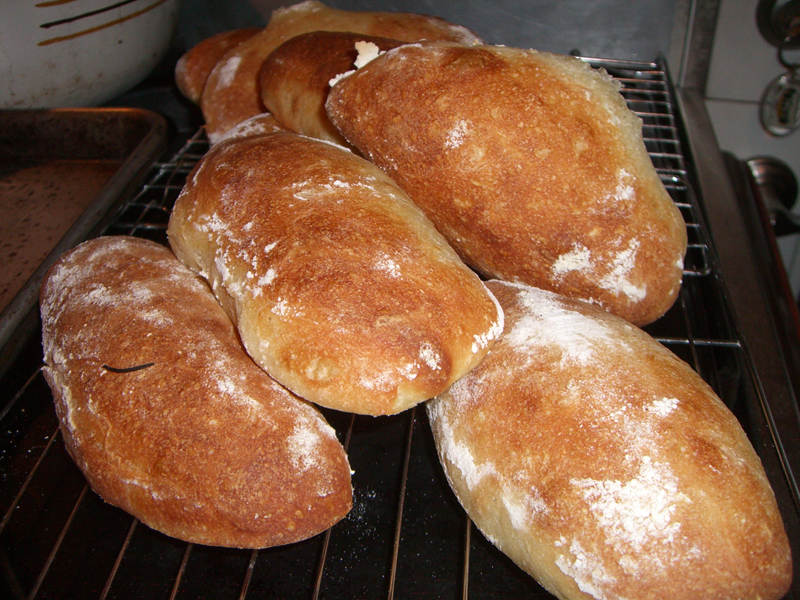 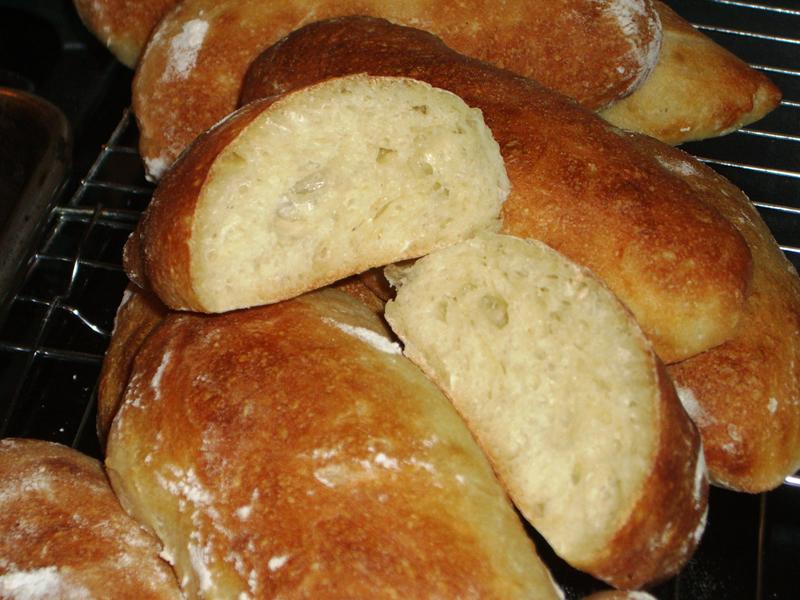 Those look nice, and delicious. What mix/kneading method did you use? Electric mixer?

Thanks for your comments.

I use a Kitchen aid mixer for the kneading.  I followed the method described in Jason's formula.  It works out great every time.

I believe,after making this recipe several times, that the technique is almost more important than the hydration.Almost.

The technique I believe that is very important is the prolonged mixing at a fairly wet hydration. I believe that this changes the crumb texture tremendously as it exposes so many more flour particles to water. It really hydrates the starch .This helps provide the starchy,gelatinous matrix which can trap the CO2 bubbles.

The next important handling technique I think is important is to handle the triple-risen dough VERY gently so there is almost no de-gassing. That is what provides the extraordinary,bubbly crumb.It's almost like handling a lump of soap bubbles.

All that being said, I have simply done all this with a recipe that has a wetter consistency than my usual loaves but with enough flour to make it a little easier to handle.The result is a compromise but good for what you are describing.So try it with either more flour in the ciabotta recipe or a familiar recipe with a lot more water but using the prolonged mixing,triple rise and gentle handling.

Also, a bench scraper of some kind is invaluable in handling a wetter dough.Nothing fancy or expensive. You can use the scraper to move, shape or cut the dough.Sometimes I wet the scraper and my hands,oiled them or floured them-whatever is at hand-all work.

One baker here suggested doing the rise on parchment, shaped in a rectangle, I believe, and then just cutting the dough and parchment paper somehow so he hardly handled the dough. I think it's buried somewhere in the original post.

At Thanksgiving. I made rolls with the high hydration method with no problem.  I just placed a glop of the dough in each place in a muffin pan.  The oven spring was fantastic and the results were wonderful.  As an aside.  for this batch I used a combination flour consisting of 80 % KA bread flour and 20% ground flax seed.  It was a great combination.  I will do it again.