If anyone has any comments about handling rye, I'd love to hear them.  I'm working on Hamelman's 40% rye.  I realize that this is not a high percentage rye, it's still under 50%, but it's enough rye to change the dough characteristics from what I've been used to handling.  My first bake of it was spectacular.  Since then, not so much.  The flavour is still wonderful, no disappointment there.  It's the texture, specifically I'm hoping for a bit more open crumb - a bit more lift to the bread in general.  As far as I know I'm following the same procedure but, obviously, something is different. 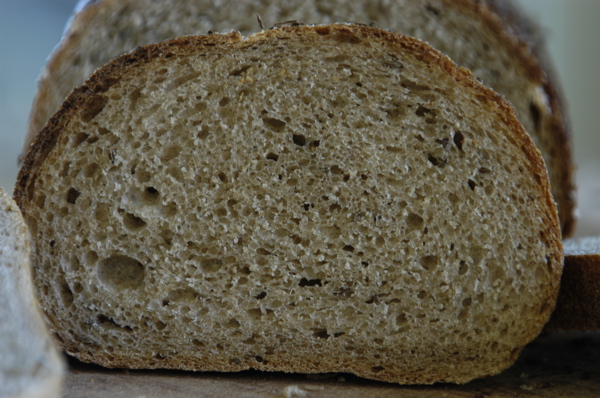 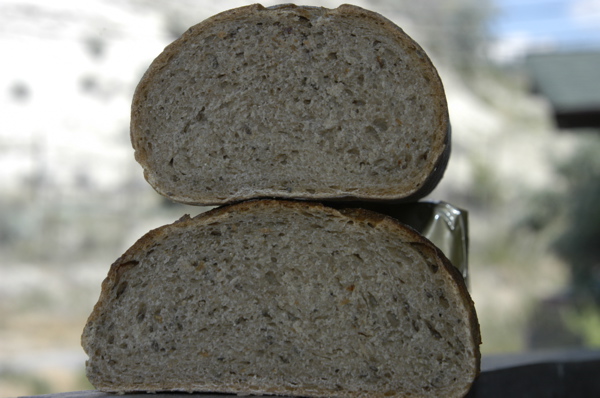 The crumb is denser and the whole bread is not as high.  I suppose it could be proofing.  It seems a bit harder for me to judge proofing with a substantial amount of rye in the dough, not that I was very good and judging it without much rye to begin with.  I think the loaves may be collapsing a bit when they get slashed and into the oven.  Proofing has been between 90 minutes and 2 hours.  That's a bit longer than Hamelman recommends, but his recipe has commercial yeast in it and he recommends longer ferment/proofs when electing not to use additional yeast.  That %^&%!! first loaf was 2 hours.

A maddening thing is that the first loaf came out so good.  One thing different that I did with the first loaf was to stick it in the 'fridge for 2 1/2 hours in the middle of fermenting because I had to go out for a time.  I really balk at the idea of sticking the loaf in the 'fridge during fermenting just out of superstition.  I suppose I can try it.  I read cautions about rye not liking long ferments, though.

The dough from the first bake was smoother than subsequent bakes have been, not as sticky.

A couple of ideas have come up by doing some reading.  In Laurel's Kitchen they talk about the pentosans in the rye and the gluten in the wheat competing for the same water.  They recommend adding the water to the wheat before introducing the rye.  That sounds like autolysing the wheat and water and then mixing in the rye paste starter and salt and caraway.  That makes sense.

If you simply want to let the wheat gluten carry the bread, you can mix the liquids into the wheat flour, making a thick batter, and beat the batter until it is elastic; then mix in the rye flour to make your dough.  But there is a way to get the rye gluten to help too.  Mix the rye, wheat flour, and salt; then add the bread's liquid measure to the flour mixture in stages, beginning with just enough to get the dough to stick together.  Knead this very stiff dough, using the rest of the recipe's liquid measure to wet your hands as you work, so that within about 10 minutes of kneading you have used most of it.  Depending on the dough, 5 to 10 minutes more will finish the kneading-but stop when the dough becomes dramatically sticky, no matter how long you've been working.

The reason for the stiff first stage is that the rye's pentosans compete with the gluten proteins for liquids, and the gluten has a better chance if the dough starts out less wet.  It is the pentosans glomming onto the water that makes rye dough so sticky.  Adding acid to the dough, by the way, helps counter this, and that is why you'll see vinegar in the recipes.

Short of the autolyse they recommended holding back a bit of the water, kneading the dough stiff first and then gradually adding the remaining water by wetting the hands.  I tried that last night and it seemed to work really well. I added 110g of the 150g total water and kneaded everything together, then gradually added the remaining 40g as I continued to knead, stopping at 10 minutes altogether.  The dough was much smoother and less sticky than it had been.  Much more like the fabled first loaf.  I think maybe the culprit was overproofing last night.  I haven't tried the autolyse method yet.

Hamelman references a wild baking technique of hitting the oven at 800+ degrees and then transferring to another, cooler, oven within 5 minutes to complete the bake.  My oven doesn't hit 800 nor is it insulated enough to hold the heat long enough to bake if I just turned it off, but starting at 550 with steam and then pretty much immediately setting it to 400 and letting it come down slowly to that temp seems reasonable.  I did that last night starting at 500 and immediately going to 400 and it worked OK I think, although I can't really critique the oven spring given the probability of overproofing.  The bottom did not burn, the whole loaf was a lighter brown, which I prefer, and the internal temp was 209 after 35 minutes.  His recommended baking temps of 460 for 15 minutes and 440 for 20 - 25 minutes produce a loaf that is too dark for my taste from my oven.

As titled, this is a bit of a ramble.  I'm in the middle of figuring things out and don't really have specific questions.  Anything anyone wants to pass along, though, I'm all ears.  Any little tidbits that anyone wants to share about doughs with a substantial amount of rye I would love to hear, including thoughts about maintaining a rye starter.  I'm currently maintaining the starter at 1:10:12 at 70F and it seems happy with that.  Feeding roughly once a day - sometimes I stick it in the 'fridge for 3-4 hours when it's hot.  My latest attempt with this bread will be a Pumpernickle starter coupled with a high extraction wheat component.  The starter is fermenting now (I hope).