Even before the recent crop of beautiful breads made with James McGuire's “Pain de Tradition” formula, I had been planning to bake the “Miche, Point-à-Callière” from Hamelman's “Bread” this weekend. Hamelman attributes this bread to McGuire, whose intention was to replicate the type of bread baked by the first French settlers of what ultimately became Montreal. The name of the bread, “Pointe-à-Callière,” was the name of their first settlement. 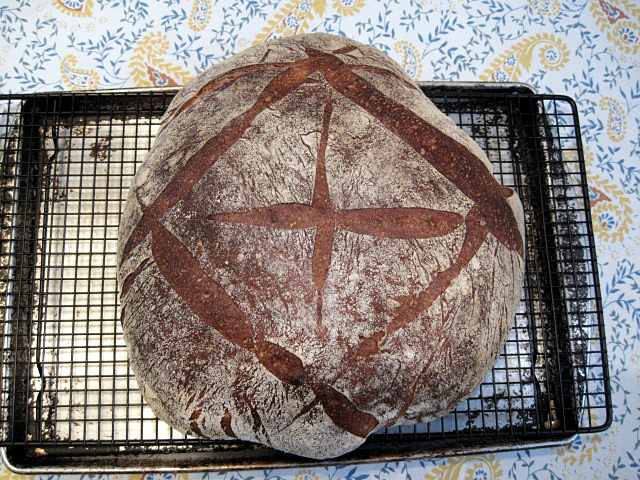 The other, more well-known, bread meant to approximate French bread of that era is Pain Poilâne. Hamelman's formula is for a 82% hydration Miche (very large boule) made with high-extraction flour. It is a pain au levain with no added yeast. The principal difference between McGuire's and Poilâne's miches is the higher hydration of McGuire's. Actually, I make this bread with 2 oz less water than Hamelman calls for, which makes it a 76% hydration dough. 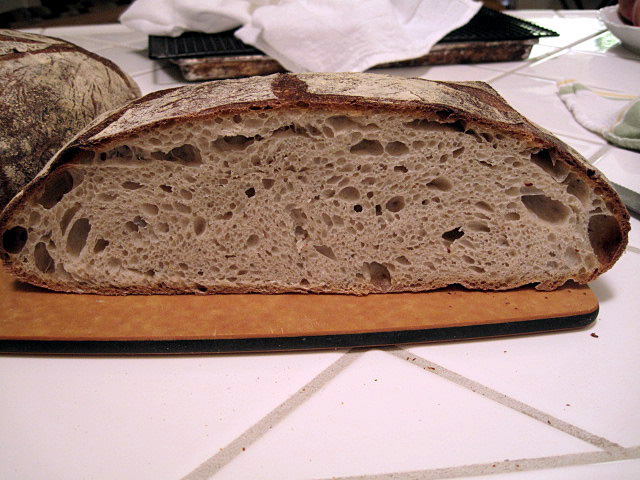 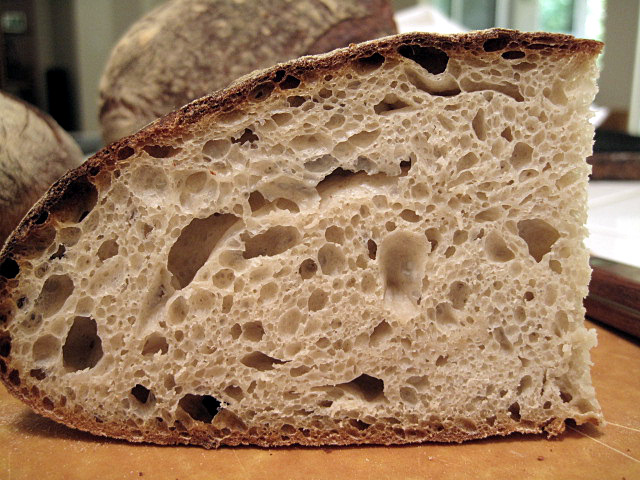 The flavor of this bread, like Poilâne's Miche, definitely improves over 1 to 3 days. I personally like the flavor best the day after it was baked. Of course, the next day is also pretty terrific, and the next … Hamelman says that the bread gets more sour and the “wheat flavor intensifies” over several days. My experience has been that the sourness does increase. I would describe the change in flavor as “mellowing” rather than intensifying. I think that is the same as what Hamelman describes as “the flavors melding.”

This bread has excellent keeping quality. Kept in a bread bag or bread box, it is very enjoyable for a week. It also freezes well. I usually cut it in quarters to freeze, wrap each quarter in 2 layers of freezer wrap and place them in food-safe plastic freezer bags.

you are so funny! Looking forward to seeing the crumb. Is the scoring reminiscent of a Fleur de Lis?

That hadn't occurred to me. I was sort of imitating one of the scoring patterns on a loaf in Hamelman's photo of this bread.

But, if it reminds you of a Fleur de Lys, it is by definition reminiscent of one. At least to you. A Fleur de Lys is not really cross-like. Here's one: 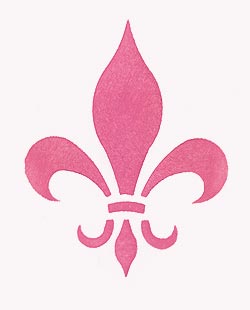 I think, if I wanted this pattern on a bread, I'd use a stencil.

I was being generous in description.. I know what a Fleur de Lis looks like..minus the vertical slash on the bottom. In any case, your slashing is very appealing.

I have always appreciated your generosity.

Being 1 month away from Canadian citizenship I worship all things Canadian.

I see the levain is 60% hydration, is it really reasonable to incorporate that with a stretch and fold?  I have trouble just getting it dissolved in water, much less trying to incorporate it into a developed dough.

The bread looks fantastic, beautiful scoring.  I'd like to saw off a big hunk to gnaw on.  Maybe with a little poutine.

If you are making a bread by hand that uses a stiff levain , cut the levain into chunks the size of a hockey puck. (If you don't know how big that is, you'll never get through the Canadian citizenship test!) Put the levain chunks in your mixing bowl and pour the water over them.

Go have a brew.

Go have another brew.

If you can still find your bowl, use a rubber scraper/spatula to smear the levain against the side of the bowl. Scrape the smears back into the liquid and mix. Continue this until the levain is sufficiently dissolved.

Add the flour and proceed with the rest of the mixing.

P.S. This should probably be in the TFL Handbook somewhere. At least in the Canadian edition.

Mix the firm starter with just a little of the water at first, then add a bit more, and more, and suddenly you realize you can mix the rest of it all in at one time.  And you can still drink a Pliny the Elder.

I assume you recommend drinking concurrently rather than sequentially with the mixing.

In any case, I learned something new today: (Pliny the Elder.)

The way you break up the levain with the water first is how I would do it too. This means the flour and salt go in the last.  But doesn't Hamelmon's instruction say to mix flour and water first, autolyse, then add salt and levain the last?

You are correct, but I was answering the question more generally, not in terms of this recipe.

I have always mixed this miche in a mixer, and incorporating the levain as Hamelman instructs has never been a problem.

Your Boule is gorgeous and the write-up is very nice..also the posts are running high on the score board of good laughs..I've been out late and it's time for bed!

David, someday I will have a flour collection like you have...sighhhhh

Crumb photos have been added to the original post.

David remember Susan isn't using equipment when she does these things. She is trapped in a Chinese bakery, thrashing away with a chop stick. No chance to get tangled up in the bowl.

The chopsticks reflect Susan's renowned good judgement. You also may have remarked on her use of the Chinese, blunt-ended type, rather than the pointy Japanese variety.

Being French-Canadian with a family still in Quebec, I can relate to your description of this bread.    I now live in England (Oxfordshire to be more precise) where we have access to great flour and I have taken courses on bread-making in SouthAfrica and here in England at R. Bertinet.  Look him up, he is a Fenchman living in Bath, England, and he has a very special kneading technique:

I shall try to make this Pointe-a-Calliere miche and will let you know how it goes. Good Baking!

When you lived in Montreal, did you ever have any of James McGuire's breads?

I'm familiar with Bertinet's method and use something much like it sometimes.

Please to share your results when you make this bread.

I did not live in Montreal long - I am from the 'real' French part: Quebec City. Moreover, being quite young at the time, my mind was not so much on bread as on study, etc.  Sadly, I have not had the chance to taste J McGuire's breads but I am desperatly trying to find any of his writings on the subject.

Great that you are familiar with Bertinet's method - one I also use although I could be quite partial to the Lepard's method, as it uses far less 'violent action'.

I have had the chance to work in Paris and in Switzerland - the later is I think where I find the best breads, that is if you like a great selection of breads with much flavor. Their flour is also very good and I stock up every year when we return from our annual skiiing pilgrimage.

Today is a memorable day: I posted my first new thread in the TFL forum.  Many of the answers that followed clearly indicated that my question was not too novel... But, here it is:

Great miche, David. I am weak too. I wonder what is your source for first clear flour -- KAF or somewhere else?

I have generally bought my First Clear from KAF. Last winter, Norm (nbicombuters) bought a 50# sack, and some of us bought some of it which he generously packed and shipped at cost. Norm's flour seemed to have a tad less bran than the KAF product, and it has a milder flavor. I love it, especially in this miche.

Why did u decide to decrease the hydration?

and i had real problem to shape the dough with 83% hydration any tips?

I originally decreased the recipe because I was skeptical about the equivalence of the liquid measure and weight Hamelman provided. Then, I kept my adjustment because I liked the result.

Shaping an 83% hydration dough into a boule is a challenge. Good gluten development through folding is key, but one must also work with a light, fast touch. That comes with practice. Keeping your hands floured, oiled or wet helps some too.