This recipe was contributed by Salome, who recently joined TFL. She is Swiss, and the breads she bakes represent a bread tradition which is new to me. The Southern Tyrolean Potato-Nut Bread (Südtiroler Kartoffel- Nussbrot) particularly appealed to me, since I have made potato breads a couple of times and really enjoyed them, and I like sourdough bread with nuts. It seemed to me that the combination of the potato and nut flavors would be delicious.

Notes: Salome's recipe calls for a mix of hazelnuts and walnuts. My usual source of hazelnuts has very poor quality stock at present, but their walnuts are very good. So I just used walnuts. 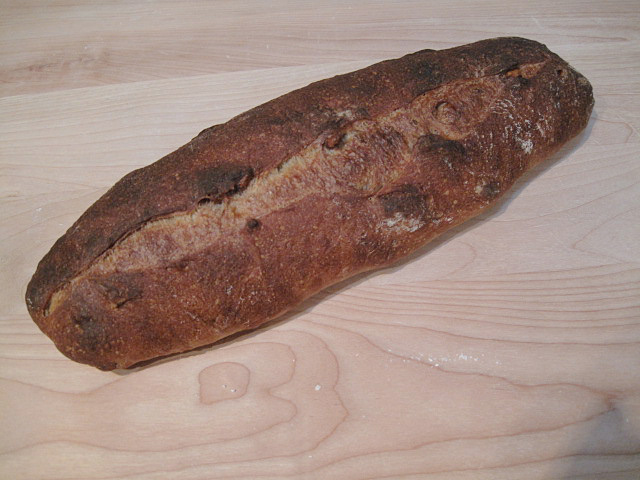 Potato-Nut Bread from the South Tyrol 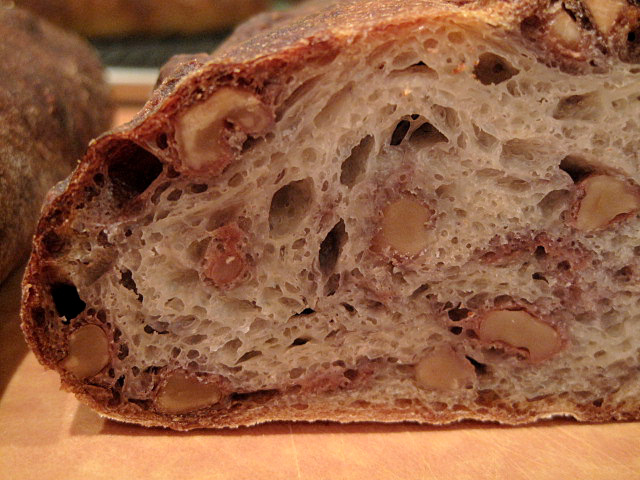 This is a very enjoyable bread eaten without any spread or addition. It has a mildly chewy crust, once cool. The crumb is tender, as expected, and has a cool mouth feel, like many high-hydration breads. There is a mildly sour under-tone, but the predominant flavor is from the toasted walnuts. The walnuts also gave up some of their oil into the crumb, so the crumb feels like it is oiled.

I thought this bread might be good with a blue cheese, so I tried it with some Point Reyes Blue. This is a rather strong-tasting cheese, and it overpowered the bread. Maybe a fresh Chevre? A nutty Compté?

The crumb shot makes my mouth water!  As always, you've provided us with another detailed write-up of formula.  Thank you.

Isn't it funny how this bread turns slightly purple?

How do you think about the amount of Coriander? I remember that the recipe which inspired me included two tablespoons (!) of coriander. So you've broken it down to one sixth of the original amount (Which I think is far to much, but I was always very pleased with 2 teaspoons)

I wonder how this bread would change if we would reduce the water amount a little. . .

I've never achieved a good oven spring with this bread (not like the scoring would give a great effect), and I notice that you didn't get a nicely open "scoring mark" neither. maybe we should think over how to give it a "new look"? Maybe somewhat more rustique?

It's really to bad that only my sister is at home who can't stand nuts. It would be so cool to bake this bread now . . . I'll have to wait for the rest of my family, hmm.

I don't think there was too much potato. I'm not scared of sticky doughs. This dough's stickiness felt like slack dough stickiness, but of course the potatoes add a lot of water. I thought about trying it with less water, but it's very good the way it is.

The purple color is from a pigment in the walnut skins. This bread actually had less purple color than some other walnut breads I've made.

Until you just reminded me, I had actually forgotten I put coriander in it. I don't taste it at all, but my coriander is shamefully old, and I only put in 1 tsp.

I will make this with hazelnuts when I can get good quality ones again - probably in the fall when the new crop is in. And I'll get fresh coriander!

The cuts didn't open up much, as you say. I wonder how it would have worked to proof it less.

I'm curious about how you eat this bread. Do you pair it with particular foods? So far, I like it best by itself. I toasted some this morning and ate it plain. With all the walnut oil in it, it really doesn't need additional fat. It was good, but i liked it better un-toasted.

Thanks again for the recipe!

When hubby saw the crumb shot,

"That looks good!  Is it too late to add walnuts to what you've got (potato rye) going in the kitchen?"

I was going to make this bread with a rye sour, but I used up all my activated rye sour with the Jewish Sour Rye. I think it would be even better with some rye, but my supply of rye is really depleted, except for lots of white rye.

I don't want you worrying about this, though. I have a rye shipment on the way from KAF.

Looks nice, David. I like your description of the crust and crumb. I'm a bit touchy about walnuts, having only learned to eat them in my almost old age with the conditions that they are first toasted and second mixed with something like blue cheese or raisins. But maybe there is hope for me with these nuts; I have made some progress. You did a great job of making this bread. Your crumb shot displays your excellent skills.

I toasted the walnuts at 350F for 10 minutes. This brings out their flavor and reduces their oily mouth feel. On the other hand, they seemed to release a lot of oil into the dough which gave the crumb an oily feel in the mouth.

I usually toast walnuts that are going into bread for only 8 minutes, BTW. I think I liked them better toasted a bit more, at least in this recipe.

Mix them with hazelnuts. (it sounds like I'm from the Hazelnut-lobby, doesn't it ;) ) by the way, that's something I always do when using nuts in baking: toasting them first, and sometimes I even soak them for a while afterwards... (not in this bread though, the dough is wet enough).

David, Lovely loaf and the crumb looks delicious! Was your roasted potato flavor noticeable?  I just found a big bag of walnuts in my freezer yesterday, I have a bowl of riced potatoes in the frig and some sourdough ready to go on the counter...hummm, I wasn't planning on baking today hummmm..the bread supply is down to a half a loaf!

The potato flavor was not perceptible to me last night or this morning. The walnut flavor predominated when the bread was just cool enough to slice but is less strong 10-12 hours later.

I have a feeling that, like many sourdoughs, the flavor is evolving. If it changes in interesting ways, I'll let you know.

Hmmm ... Your bread supply is dangerously low! You better get baking. ;-)

I cannot remember exactly where I read that potatoes in the bread have very little flavor and have the most affect on the  tenderness of the crumb and fluffier/ texture.  I was curious as to the roasting of the potato in this bread.  I know roasting brings out a lot of great flavors..  I think if the roasted potatoes are to left in chunks in the bread then the roasting might add a very nice taste!  What do you think the crumb would be like if the roasted potato was added in small chunks in this recipe?

I think it would be a different bread. I assume you have read SusanFNP's entry on Roasted Potato Bread. I will probably try it one of these days. I do love potatoes.

David, your right!...if I want a potato bread then that's what I should make... thanks for jogging my memory...that is a gorgeous loaf of Susan's that I have not baked!  Iam also very fond of potatoes to say the least!  Now I have 2 loaves on the list!

Now that I think of it, the perfect potatoes might be Pommes Sarladaises. (Sliced or diced potatoes sautéed in duck fat and garlic)

Just be sure to make enough potatoes for your bread and to accompany your duck confit!

What a meal!  I know I would eat all the potatoes and duck before it ever got to see the dough!  Dad used to do a lot of duck/goose/bird hunting...when we lived in Texas near the LA. border.  A chef in a resturant 'casino in the swamps' used to prepare the goose..Oh, my!  Last time I had a great dinner like that was when my Louisiana/French son-n-law had me order the duck dinner on a visit to LA....thanks for the memories!  I love the way potatoes tenderize dough..I think I would have to try this recipe the way you made it...I don't care for hazelnuts at all!

your detailed instructions are appreciated!  thanks to salome too for sharing that recipe.

I made this bread yesterday, and it's one of the most charming and delicious loaves ever. The crumb is so tender and the nuts have a wonderful sweetness. Chewy, caramelized crust adds to the overall effect. My bread had a tighter crumb than yours, David, but it was so light and soft and tender...ummm. I used all hazelnuts, toasted, and because I didn't have coriander, I used a small amount of lemon zest. The lemon zest was almost indetectable (that was my intention, just to give a suggestion of lemon), but it added a clean, light flavor. I used Giusto Baker's Choice and white whole wheat and doubled the recipe.

I encourage everyone to try this loaf, it's wonderful! Thanks so much for the recipe, David!

I love the WWW idea.

The recipe is Salome's. You should thank her.

I love this loaf.

I'm very happy that you like this recipe as much as I do!

I'll bake it during the next days again as well.

I just prepared the sourdough for baking this bread tomorrow. And I came here to read your instructions :-D I was curious what you changed.

I want you to know I froze one of the loaves I made and took it to the Oregon coast for my family vacation just a few weeks ago. It was a big hit. It stayed moist and fresh-tasting for 4 days. (It might have stayed good for longer, but it was all eaten by then.)

Looking forward to seeing yours (with high expectations)!

I just took a large loaf (made the recipe into one gigantic one and froze it) with pecans on a family getaway to the hills. It was a big hit; the pecans colored the dough slightly, as walnuts might. I think I like it best with hazelnuts and lemon zest, but it's versatile and delicious this way, too.

I have been frustrated by not being able to get decent hazelnuts locally right now. And I had such delicious ones, bought from the grower at the Hillsdale Farmers' Market, when I was in Portland a few weeks ago.

<hitting myself up long side the head> I'm going to ask my son to ship me some from Stumptown! Woohoo!

On my way home from work I drive by acres and acres of hazelnut trees (we call them filberts back east). I always thought that I didn't like them. Turns out all I ever had was stale nuts, yuck! We would have the mandatory bowl of whole nuts in a wooden bowl at Thanksgiving. God knows how long they had been sitting in some warehouse. I would offer to send some of to you, but since your son is in Portland I know you'll be well taken care of.

I'm going to try this loaf of Salome's next. Thanks for the fine write up.

From surfing Oregon Hazelnut farmers' web sites, I gather that the harvest is in late Sept. or Oct.. I'm going to be in Portland in early October for a meeting and will pick up some freshest picked.

Hazelnuts are a real delicacy here if we can find them fresh. Trader Joe's, of course, has them all the time, but it's not the same.

My mother has several acres of pecans, so we put them in everything. I do love the look and flavor of the loaf with the whole hazelnuts alone, however. It's dramatic and different.