After last week's 70% rye bread, which I thoroughly enjoyed, I wanted to return to the first rye I had made – Jewish Sour Rye – to see if my tastes had shifted. I made the Jewish Sour Rye from “Secrets of a Jewish Baker,” by George Greenstein.

This is a classic “deli rye,” or “light rye.” It is made with a white rye sour. Rye snobs (who will remain nameless) turn up their noses at white rye because it has so little rye flavor. In fact, most of the time, I make this bread with whole rye. But, this time I made it “by the book.”

Well, not exactly by the book. Greenstein's book provides volume measurements for all ingredients. It has been criticized for this. Last year, I worked out the ingredient weights for the Sour Rye recipe, and these are provided below. 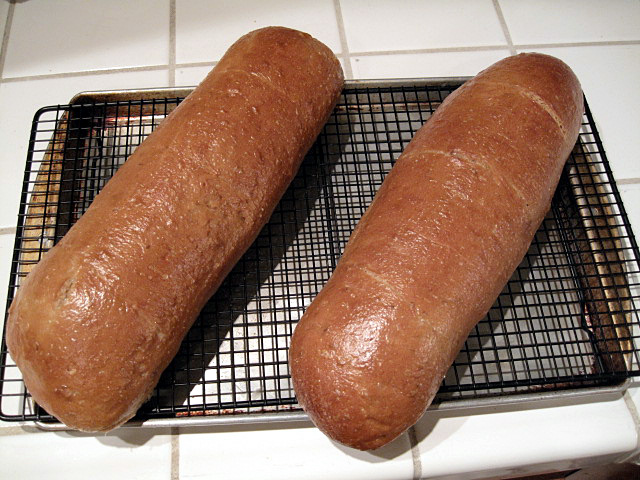 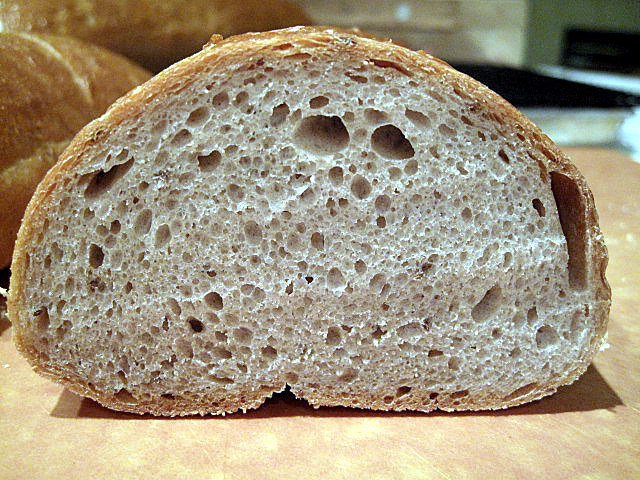 Well, the verdict is: I like rye bread – white rye, dark rye, whatever. Each has it's place. The Jewish Sour Rye I had toasted for breakfast with Salami and Eggs was just right. The 70% Sourdough Rye I had for lunch with slices of Smoked Gouda and Cotswold cheese was perfect.

It's not such a hardship, having to make these choices.

I'll cook the corned beef for dinner! I've got some great Plochman's stone ground mustard and a jar of Mezzetta horseradish too.

I'm crazy about corned beef, and this bread is what it should be eaten on. However, I get it once every 5 years or so. My wife doesn't like it. It is really rather unhealthy, which is part of her dislike.

That said, if I have a Jewish deli within 150 miles, I'd certainly indulge more often.

Sylvia and I will have to meet you in Fresno. I'll have to check with Sylvia to see when she's free.

I've forgotten, is that leftover sourdough? Do you soak it in water or something? and does it go in at the time of the flour or with the yeast and rye sour?

Oh..and very nice loaves, that's why I'm asking the questions! I've got your Pain de Campagne in the fridge for tomorrow's bake. Can't wait to see how it comes out.

The use of "old" bread or "altus" is traditional in Jewish rye breads, including pumpernickel. This was probably a way of not wasting bread that hadn't sold the day before, but it adds flavor and texture to the bread and has come to be seen as an enhancement. I have been told that, in Germany, there are laws limiting the amount of altus that can be added to bread dough.

Altus is made by cutting up the "old" bread into cubes and soaking it in water, then wringing it out. A typical amount might be about 1/4 cup of altus per 1.5 lb loaf.

Beautiful Loaves and what a lovely crumb shot.  Nicely written recipe,  Thank you!

Would you tell me what altus is and where I can get it? Thanks, Pamela

soaked in water and added to dough to enhance flavor. Is that right, David?

Hi, crunchy. You got the "what" right, but the "why" is more a matter of texture than flavor, I think. It is believed to enhance the flavor by some. I dunno.

Stash some of that left over rye bread in your freezer and then you'll have some handy!

I prever to just cut the bread into tiny cubes and dry them.  They keep a long time and don't require energy to store.    I generally use more than 1/4 cup, more like 1 to 2 cups for 1 1/2 lb loaf.  It is a great way to use rye bricks or frisbee's.  Think of it as a two step process!

The first time I used altus, I was given a perfectly good purchased loaf that I was to pass on to the goats.  Goats?  No way!  I tasted it and guessed it wasn't eaten in the first place because it was too bland, at least too bland for an Austrian, a bad loaf really but it was rye and rye was rare.   All it needed was a little more spice.

I took one yeasted loaf recipe and made three loaves by crumbling the loaf and adding more water and spices.   It was too much bread for us so I gave two loaves away.  One to the purchaser of the first loaf who was more than delighted although it contained less rye.   I found out years later this was a little known trick to improve flavor.  I found out through TFL that it's called altus.  I also found out here that if toasted, it flavors even better!

Thanks, Mini, for relating your Altus experience. When someone tells a story about an ingredient it always tends to stick in my head.

So you dry the bread in cubes and just keep it at room temperature indefinitely?

I think I'm hearing you say that you toast the old rye first for better flavor. That would make sense but I've never heard of that. Add a few spices for flavor. Sounds interesting.

into a toaster before soaking or cutting it up.  I don't keep altus around longer than a month because I like it so much as an ingredient.  At room temperature I don't have to figure in too many temp. changes.  I just put some into a blender with water from the recipe and let it soften.  Puree and add to the sourdough or drop the sourdough into the blender.  Pour into a bowl and add rye flour & spices by hand.  Sometimes I add a little bit more water to make up for what the altus absorbed.

Eric, are you out of bread spices?

The pumpernickel from BBA is good. The one from "Secrets of a Jewish Baker" is better, in my opinion.

I hope you will let us see your pumpernickel and let us know how you like it.

BTW, my favorite way of eating this kind of pumpernickel is un-toasted, with cream cheese, as an accompaniment to scrambled eggs cooked in brown butter. Yum!

How do you get your logs so perfect?

I have used altus as a thrown-in ingredient in my sourdough and have enjoyed the flavor and texture. It really is, as some have already pointed out, a great, guilt-free way to use up that bread that gets too hard or has other qualities that we don't love. The effect in my loaves was rather like a soft nut or oat addition (although that's not exactly the right description). I used crumbs from breaking up the super-hardened bread ends in my food processor.

Upon reflection, I think altus could really be added to any loaf given that it's soaked first, like oats or flax. Haven't tried it, but I will...

Pat the dough pieces into a rectangle about 5 x 8 inches.

Turn a piece so the long axis goes right to left. Fold about 3 inches of the right and left ends toward the center and seal the seams.

Rest, seam side up, covered with plasti-crap, for 10 minutes.

This time, I used something like the "roll-up" technique illustrated in Mark Sinclair's video (http://tfl.thefreshloaf.com/node/8432/latest-video-back-home), starting at 1:08. The pan loaf shaping technique in BBA is similar, but simpler for beginners.

On reflection, I think that the "perfection" has less to do with how the loaf is shaped (as long as a good "skin" is formed and the seams are well-sealed) than with how it is rolled out to a uniform diameter with just a bit of taper at the very ends. It's another "iron hand in a velvet glove" thing.

Whew! it takes longer to describe it than to do it!

for taking the time,  I appreciate it.

Not being able to get decent rye bread locally was a major reason I started baking bread again. Since then, I have really opened my eyes to the variety of rye breads beyond those with which I had been familiar. It's been a good trip.

whats is the hydration of your sour david?