My mom had a special request for cinnamon rolls for her birthday so I'd like to thank zolablue for the recipe here (It's the second recipe down the list):

I'm mostly posting as a thank you but also with some of my personal experiences that others might benefit from reading about if they choose to make these WONDERFUL and EASY rolls:

1) I used 6g instant yeast instead of a packet (7g) of active dry.  Therefore I added an extra half cup of potato liquid to the recipe because I didn't have to disolve the yeast in the beginning.

2) I used lard instead of shortening.  I don't know if this is the reason that when I added in the eggs, milk, potato, and potato liquid, it came together with rather a curdled look.  I did add the eggs one at a time and when the first one did not mix in smoothly, I broke out the electric beater.  The concern was all for naught, though since once I added the flour everything came together beautifully - So don't worry if you get this curdled looking texture beforehand.

3) I used KA organic AP flour and it took 5 cups to create a workable dough, though I may have been able to get away with even less flour.

4) I couldn't find cinnamon chips at the grocery store so I just spread the sugar out on the buttered rolled out dough and sprinkled the whole thing with as much ground cinnamon as I thought would be desirable - A complete but thin layer.

6) I made vanilla icing and did not use the full amount of milk since I was leaving out the chocolate and it would have been too watery. 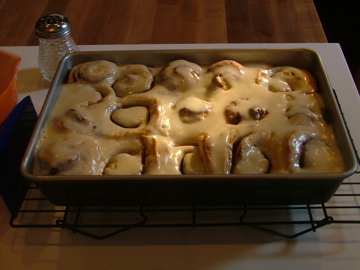 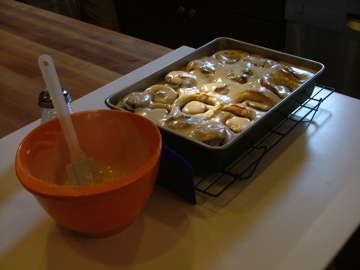 I know that it looks like I went crazy with the icing (I actually did have some left over!) but once the roll was on my plate it looked perfect!

Thanks ladychef41 and David for the tips on freezing the dough.  That technique will be very useful for me.  At the end of June I will be in charge of my sister's wedding day breakfast for about 40 people and have been trying out different make-ahead options.  So far i've tried freezing shaped croissants of different varieties and it works very well.  Fully cooked bagels also thaw out well.  I was thinking of doing zolablue's mini cinnamon roll option.

BTW I really liked the tips of spreading the dough with softened butter and cutting the rolls while semi-frozen!