This was my first attempt at an "épi de blé," or "sheaf of wheat" shape. I made it with Anis Bouabsa's baguette dough. 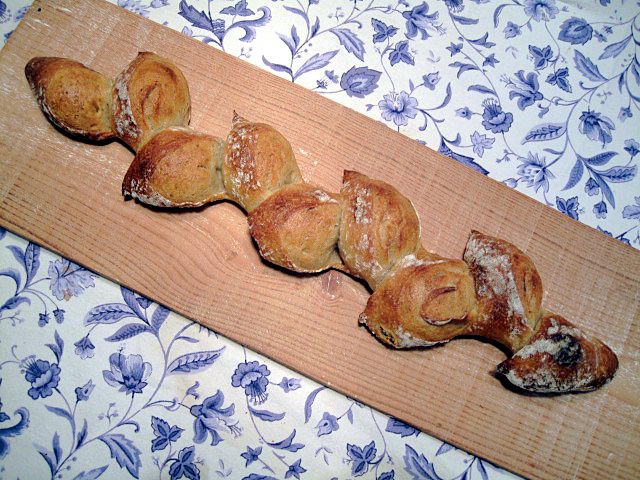 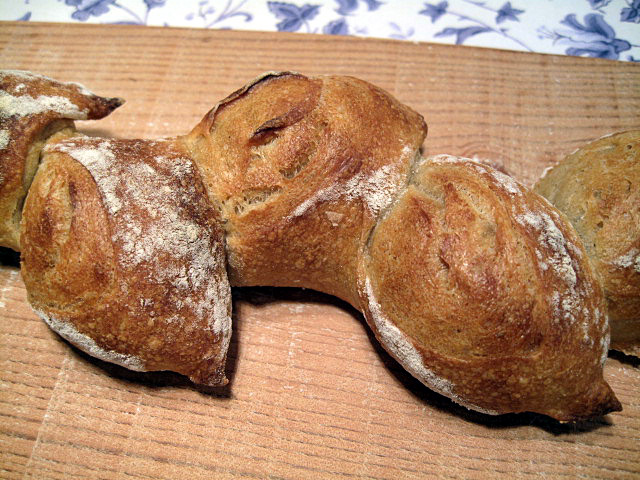 Pretty darn nice for a first attempt, David.  Did you do the cutting while the baguette  was on parchment?  I can't imagine trying to get an epi off a peel, unscathed, to a hot stone.

Those epis are so beautiful! I cannot wait until this semester is over so I can try some of your recipes. Also, I need to look back at your past posts to read how you steam your oven -- the crust looks so reddish and shiny!

Those nine bites look terrific, David. I hope you made more than one!

You would have laughed hard at my first attempts at those things. I didn't have any explanations and didn't see the logic. Maybe you could do a tutorial on how to make a "baguette épi"!

Looks great! In my house they all like them because each person get a portion with lots of crust.

See my "thank you" message below. It has instructions and a link to a Boulangerie Net video.

And no being a curmudgeon...

That looks perfect David and I know it's not as easy as it would seem. The crust ratio makes these a nice treat at a party when everyone tears off a bite size portion. You must be well focused to do that well the first time.

Indeed, beautiful.  And I agree w/ Eric that those are tougher to make than they look.  I've tried a few times but always made a mess of it.

I must try this now.  I'll use some of the dough I just took out of the fridge to make a small epi.  Thanks.

I followed the instructions for cutting the épi in Hamelman's "Bread." He provides a number of critical pointers:

1. Use a very sharp scissors.

2. Hold the scissors at a very shallow angle to the loaf.

3. A thinner loaf works better than a thick one.

4. Cut almost all the way through the loaf. You want a very thin "backbone."

He doesn't specify when to make the cuts, but the instructions are in the context of scoring, so I assumed (correctly, I'm sure) you form a baguette, let it proof and, just before loading in the oven, make your cuts.

Hamelman also neglects to give any guidance regarding transferring the cut épi from the couche to the peel to the oven. I proofed the baguette I intended to make as an épi on a strip of parchement placed on my couche. I also made two "regular" baguettes from the same batch of dough which I proofed directly on the couche.

I then transferred the 3 loaves to my baking stone and baked them with steam for 10 minutes at 460F/convection and 10 minutes at 480F regular bake. I let them rest in the turned off oven with the door cracked for another 7 minutes, then cooled on a rack.

The épi is very flexible when it first comes out of the oven and must be handled delicately. It becomes more rigid with cooling.

I hope these tips encourage you all to try this really fun shape.

For you "visual learners," here is a link to a Video of a French professional cutting an épi from Boulangerie Net. (It's in the second video on the page.)

You did a great job on your epi, David!

I have made several epis, and none have been the least bit beautiful. I'll take your tips and try again.

Hi David, I am new to sourdough bread but I am catching up fast.  This is my first ever reply to any posts.  I just wanted to say A BIG THANK YOU to you for all your photos and comments on TFL.  I enjoy ALL of them. You must be super organized to be able to do what you have done.  Every now and then, I email photos of my home baking & cooking to my sisters and friends back in Taiwan, they wonder how I get the time, but it's nothing compared to what you've done. You are a true artisan home baker.  To me, your Anis Bouabsa baguette (and now Epi De Ble) demonstrates the true artisanship where, because the ingredients are so few, one must be very good at every little detail in the making.  And I guess, as with any art and craft, one doesn't achieve the sense of flow and rythm, as I perceive you do, until one is ingrained with all the skill aspects of it.

Once again, thank you.

I appreciate your kind words. And welcome to TFL.

Your message certainly shows that you know "the secret" to success: Study what the "masters" do, pay attention to details, practice and don't give up.

Nice epi loaf, David....It's not easy getting them so nice and straight!  I tried these once and found the hardest part was placing them in the oven.  I have found myself many times wishing my oven were shaped deeper and narrower...I've decided to save the next attempt for the WFoven...it would make it so much easier for sliding those long thin baguettes and epis in the oven.  The stone is very heavy and cools the oven to much to try and pull it out so the loaves can be slid off the paddle.  I use the wood from wine crates and find it makes a nice size paddle for the house oven because it's nice and thin and just the right width.  Ive shaped a handle on the end and it holds flour nicely.

I proofed the epi on a thin strip of parchment and kept it on there when I transferred it to a peel and thence to the baking stone.

I also use a slat from a wine case as a transfer peel! It is the board on which the epi sits in the photos above. It works well.

I didn't have a baguette dough but tried anyway for a rather small epi.  Thanks David, next time I'll make the dough flatter.  Good fun and tasty first try for a moderate success.  With this under my belt, pun intended, I'll do one with better dough and knowledge.  Both will be kneeded.

This dough was handy so I used a portion for an epi.  It is a simple dough with spent grain ----barley---- from a nearby microbrewery.

Oh my gosh, first try and such a beauty! Epis would be such a lovely addition for Thanksgiving and dinner parties. I've watched them cut Epis before, but I know that it can't be as easy as they make it look. Bravo!

But, no. Jeffrey Hamelman's "da Man." I just did as I was instructed.

I actually did find it easy. Maybe it was beginner's luck. We won't know until I do it again.

very nice david, each of the ears is beautifully uniform in shape and size!

I started a batch of the anis boubasa last night, but following your adaptation for sourdough... I'll let you know how they turn out.

thanks for the pic

Hi, I make epi every week as my husband is a 'crust' man. I find it easiest to transfer the baguette to the peel and then to make the epi cuts just before I slide the loaf into the oven. If you sprinkle the baguette really well with flour or rice flour before you make the cuts, you get a very pleasing contrast in the finished loaf. If I could work out how to post a picture I could send one!

Just read through your thread on making the epi de ble.  I'm sure you are familiar with the sourdough pull-aparts made in Sonoma for enjoying with the bread and cheese of the region?  I have always enjoyed this individualized treat!  The epi seems to be the original.  Have you made any Epis lately?  Have you learned anything over the last year and a half (including your enviable experiences at SFBI) that has changed your perspective on this unique bread shape?

I certainly gain a lot from reading your posts.  Thanks for your efforts.

I haven't made an épi since last week. See Baguette and variations

I don't think I learned anything new about this particular shape, but I did learn about a number of variations. Photos are in my reports on the SFBI workshop. See the report on Day 5.