There was a recent post on cake flour and I had ordered a bag of K.A. Queen Guinevere cake flour in Dec.  It was time to test it  and I was very pleased.  I love Coconut on cake so I made the white cake recipe on the back of the bag...it was perfect for the coconut, cream cheese, butter frosting with a bit of my homemade strawberry jam in the center.  The only changes I made were to use 2% milk instead of cream and I had fresh x-large eggs so I reduced the egg whites by one egg.  The cake looks very small in the photo 'big strawberry'  but it is actually a 9" cake...plenty...I put half in the freezer wraped in foil and into a container. 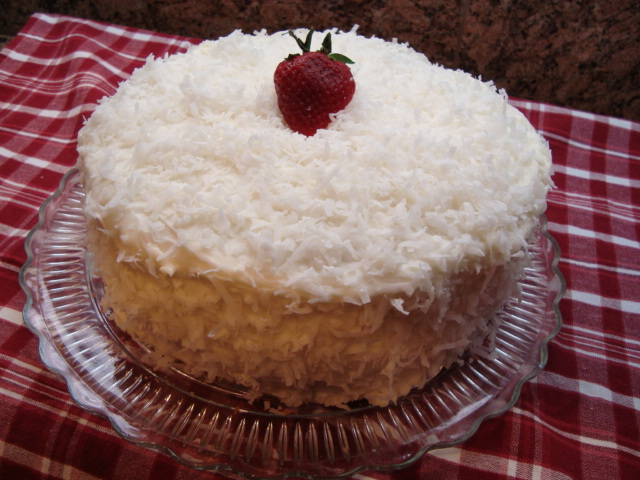 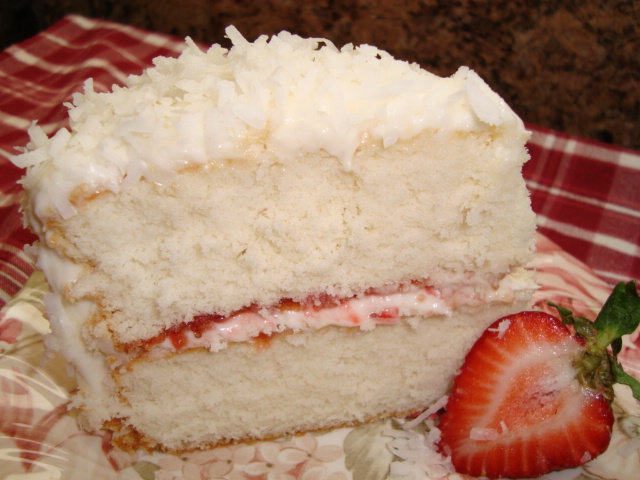 Nice recipe on the back of the flour bag!  The egg whites make it nice and lite!

beautiful! Bet it tastes terrific as well! Thanks for sharing, now, I guess I will get some of the flour myself...>g<

Next time I order for KA, I'm going to try a bag of their cake flour. Your cake looks terrific!

Thank you ivyb and Pamela!  The flour is lovely and the cake was easily mixed in the kitchenaid!  The frosting is from what I usually have on hand.  I could eat this whole cake myself...so I put half in the freezer.  It is very good!

I seldom order from the Baker's Catalog any more, but the Queen Guinivere cake flour is one thing that I will probably order in the near future..I have not done comparison tests between it and either Swans Down, Softasilk, or White Lily cake flours..

It is my guess that the cake flour from KA will be fresher, as their turnover is in all likelihood much higher than the average local grocery store..

My local Giant Food grocery store just finished a major renovation 6 months or so ago..When the revovation was completed the aisle where they formery stocked baking goods was not only shortened by approximately 6-8 feet; but the amounts and varieties of flours, sugars, etc. that one uses for baking have now been reduced by approximately 50%-75%..And, this in a store located in the middle of several relatively upscale neighborhoods that contain a disproportionally high number of stay-at-home-moms compared to other Giant Food grocery stores located in less affluent neighborhoods in Baltimore City..

This trend, I am sure, reflects a nationwide move away from home cooking and baking to purchasing ready-to-heat foods, eating out in restaurants, and ordering in take-out foods..I fear that grocery stores, especially those not locally owned, will continue to only stock those products that sell well (bean counters rule!!), and will continue to discontinue stocking products that sit on the shelves too long..Unfortunately, I see baking products quickly going down this road as more and mor Americans stop baking at home other than for special occasions..

BTW, that is a nice looking coconut cake, although I tend to prefer a yellow cake for my coconut cakes..This one looks pretty tasty!!..

Softasilk cake flour comes with an expiration date on the package--this is something I first noticed several months ago. Now when I go to buy it, I'm always checking to make sure I get the freshest box on the shelf.

Hi Bruce, Everything you said makes a lot of sense.  I have women so often stop me in the baking department and ask questions about baking or a recipe...probably because Im such a label reader!  I really believe most buy the one bag of Bleached A.P. to perform all areas of their baking and cooking.

I think the KAQG flour is much fresher than whats on the shelves in my grocery markets.  My husband loves yellow cake with chocolate frosting!  Actually this cake has one whole egg along with the whites...but didn't seem to affect the white color of the cake!  I also prefer yellow cakes...seems such a waste to not use the yolks...but I saved mine for lemon curd...I almost used some I had made for the center filling...but is a little overbearing.

All in all the flour is well worth the ordering....everything I have ordered from them has always been so nice and fresh!

That looks like one coconut cake to die for. I do love the stuff. The cake recipe I make has coconut and coconut milk, mmm mmm mmm, never too much for me.

Thank you, the piece placed in the freezer had to come out as the first half went very fast!  I almost replaced the milk in the recipe with coconut milk..maybe next time.