I'm eating a lot of bread these days :)

The latest batch to come out of my oven, is pictured below: Two loaves of Suas' caramelized hazelnut squares. 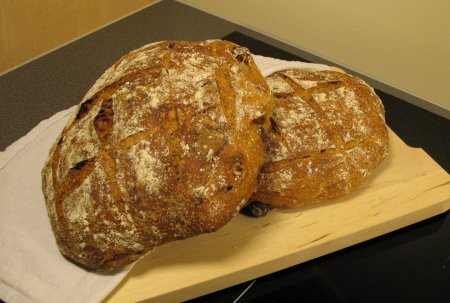 A total of four different preferments are mixed 12 hours before the final dough: Two levains (a white and a rye levain), and two stiff sponges (a white and a whole wheat sponge). The two sponges and the white levain are very stiff, probably to make the final dough stronger. I did consider doing an autolyse on the non-prefermented flour, but I feel the resulting increased protease activity would counteract the effect of the stiff preferments, so I dropped the autolyse. The recipe doesn't call for any either, and I think it was a wise choice as the overall dough is very wet (77%). 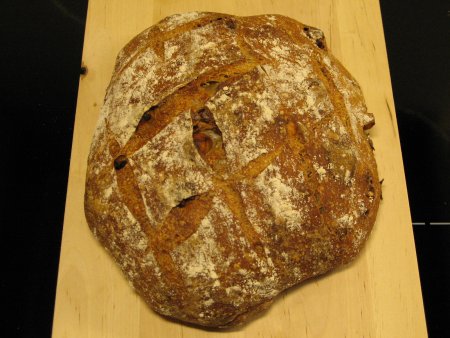 After an "improved mix" and some folds in the bowl using a plastic scraper (thanks to mountaindog for updating me on the vocabulary!), roasted and caramelized hazelnuts were incorporated on first speed. The mixed dough was bulk fermented for two hours, with a very gentle fold after one hour. The dough was a bit sticky but not overly so. Wet hands and a dough scraper saved it from getting stuck to the table :) 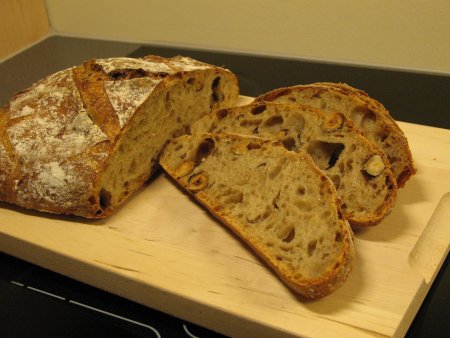 No pre-shaping on this one, just cut it in two pieces and scooped them into rectangles and 35 mins. proof.

The rustic "squares" (yeah, mine aren't exactly square now are they?) are incredibly rich in flavor. To me, the recipe is perfectly balanced between a wheaty, slightly sour note and the sweet, decadent hazelnuts. The crumb is very airy and light, and the crust is crunchy and strong. What to put on top of these slices? I tried one with some Dutch cheese and one with a bit of honey, but for this loaf, my best advice is: Bread alone. :)

I'll have to look up this recipe. Here in Corvallis, hazelnut farms are everywhere. Thanks!

Wow, Hans, you've convinced me with those beautiful looking loaves to get a copy of ABAP (is that the right acronym for Suas' book?). I just received a generous gift card to an online bookstore where it is sold, so what the heck, I ordered it. This recipe looks delicious! Beautiful crumb once again!

Quick question: what is your "improved mix" method you mention above? For all the Hamelman recipes I've been making lately, I stopped doing the French Fold, instead I'm following what I think is David's and many others' method of: after the autolyse I've only been initially folding in the bowl with plastic scaper for about 3 min. continuously, then three stretch & folds 30 min. apart, then nothing until it's doubled and ready to shape (about another 90 min at 75F). It's been working really well so far and I'm getting a very open crumb.

I too ordered the Suas book...should be here on the 10th. A couple questions also for mountain dog...sorry to hijack ! When you say you fold in the bowl for 3 min. are you saying it is like what Hamelman has for the no knead French bread that gets 20 folds every 30 min  for 3 hr ? Also For the stretch and fold...do you remove from the bowl to floured/no flour counter to do this? Thanks  in advance ! c

Hi Trailrunner, I don't want to hijack Hans' lovely blog entry as you say, so I just posted another blog entry here that bullets it all out. I'm not familiar with the Hamelman "no-knead 20 folds" exactly (that's not in Bread, is it?).

Lovely breads/loaves!  I like the crumb very much!  I bet they taste wonderful!

Thanks for your compliments everyone! I finished off the remainder of the first loaf for breakfast this morning. I can't wait to have a crack at another batch.

mountaindog: You won't regret it. Right now, if I could keep only a single bread baking book, this would be the one I'd cling on to. Although I didn't love it immediately, it's now become my textbook of choice. The "improved mix" term I used is also taken from the book. Suas operates with three different categories for dough mixing: Short, Improved and Intensive. A short mix is just that, a quick mix on low speed. This is used if you're dealing with fragile doughs (like the spelt bread I blogged about previously) or if you want extensible doughs and loaves with an irregular, open crumb. A short mix is applicable for slightly wetter doughs with small amounts of yeast, as you're relying on a long bulk fermentation and repeated folds to develop gluten strength. To give you an idea, the bulk fermentation is typically 2-3 hours with approx. 3 folds.

An intensive mix is more in the vein of large scale, commercial operations, where high-energy input mixers are used to oxidize the dough greatly. This is will be nigh on impossible to recreate with our home mixers I suspect. An intensive mix is followed by a short bulk fermentation and a slightly longer final proof, and a very even, homogeneous crumb.

The improved mix is somewhere in between. For an improved mix, you're often looking at 2 hours bulk fermentation with no or just a single fold. Results of the different levels of mixing is illustrated very neatly with some windowpane shots in ABAP, so I think you'll get a much better idea once you get the book. One of the book's strengths, is how it very clearly describes how the different levels of mixing is connected to the composition of the recipe and floor times for the doughs. For me, bits and pieces that I've read here and there suddenly started to make sense. It can't be stressed how important it is to picture the bread making process as a continuous one: Each step in the chain is really dependent on every previous step. If you're modifying it at one step, those changes will probably make themselves felt in every following step as well.

Regarding "French fold", perhaps I'm misunderstanding the term myself... What I meant was that after a few minutes if mixing, I scraped the dough down from the hook and the sides of the bowl, and then used a plastic scraper to lift a piece of the dough and stretch it over itself. Then rotate the bowl a little bit and do the same thing. Almost the same as folding, just in the bowl... Is that a "French fold"? Hmm... maybe it doesn't even have a name. It sounds pretty similar to what you're describing though, md, but for the improved mix, I combined this with ordinary mixing. I've got a pretty small mixer, and it takes some time to get the desired gluten development.

Hans - thanks for the description of your "improved mix", and now from what you've described of ABAP, it will be extremely useful to me just for the mixing details alone (even if I never make any "pastry" :-) )Look forward to reading it when it arrives, and like you, I've tried so many different techniques over the past 2 years that hopefully all of that trial and error will all come together after reading this.

By French Fold, I meant Bertinet-style, as in this video, but I have not been using that lately as I've been making more slack doughs and reading Hamelman, so I'm being much more careful now with time, temperature, and folding than before, and getting better results. Even on doughs with less hydration (63-65%) I am getting open crumb from just brief folding in the bowl, then 3x stretch & fold, and controlling time and temp more closely - no mixers and no extended kneading or folding.

Oh! So that's the "French fold". Well, I've never done any of that. No, just a careful folding action using a plastic scraper with the dough in the bowl. I'll edit the part of the original blog post. Thanks for clearing that up for me, md :)

I completely agree: Mixing is so important when it comes to the crumb structure. People often say that you need a gloppy dough to get open crumb and irregular holes, but I disagree. Based on my experience, to get the open crumb structure, you should favor the dough's extensibility. Mix it carefully and develop gluten strength by repeated foldings during bulk fermentation. It's often easier to do this with slightly higher hydrations (68-70%), but it's definitely doable also for drier ones, in the hydration range you mention, md. It's always a tough balancing act, of course: Make the dough too extensible and the loaf profile will get flatter. Make the dough too strong (elastic), and you'll get a lovely oval cross-section profile, but a more homogeneous crumb with smaller air pockets.