Scoring loaves creates a visually pleasing pattern, and it helps control the expansion of the loaf as it bakes. This was discussed not long ago in this topic:

The San Francisco Sourdough breads I baked today illustrate a more "advanced" aspect of scoring that is alluded to by both Hamelman (in "Bread") and Suas (in "Advanced Bread & Pastry.") 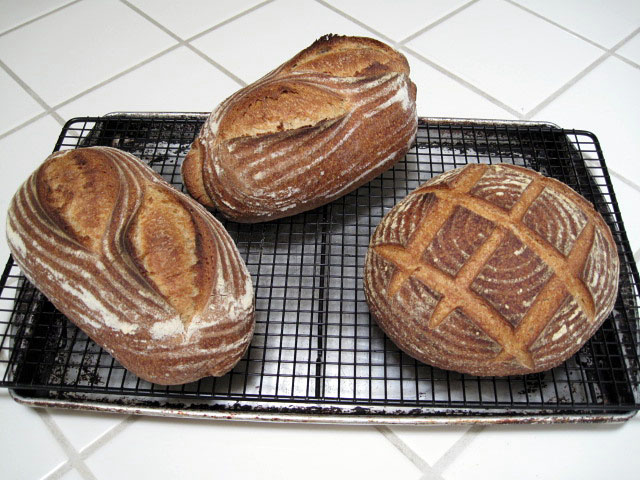 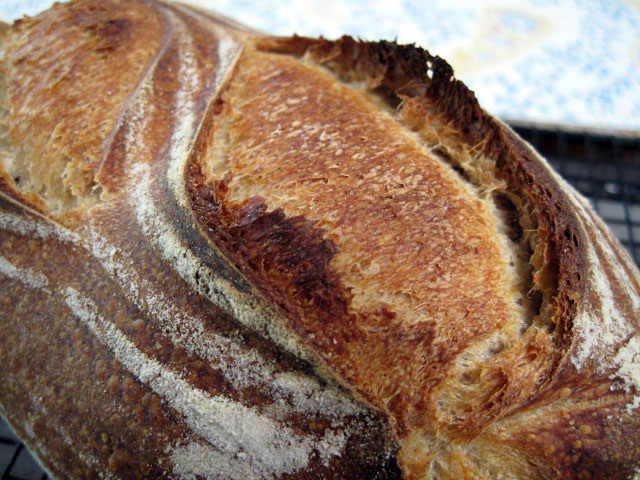 So, what is the point of an ear?

The angle is also important. "If the angle is not achieved and the cut is done with the blade vertical to the loaf, the two sides of the dough will spread very quickly during oven spring and expose an enormous surface area to the heat. The crust will begin to form too soon - sometimes before the end of oven spring - penalizing the development of the bread. If the cut is properly horizontal, the sides of the loaf will spread slower. The layer of dough created by the incision will partially and temporarily protect the surface from the heat and encourage a better oven spring and development." (Suas, pg. 116.)

The second photo, above, illustrates a fairly nice "ear," but it also shows that the bloom occured slowly, as it should. Notice that the color of the crust in the opening has 3 distinct degrees of browning, decreasing from left to right. The darker part on the left obviously opened first and was exposed to the direct heat of the oven for longer. If the bloom occured too rapidly, it would have a more even coloration. For example, see the photo of the boule, which was slashed with the blade held at 90 degrees to the surface of the loaf: 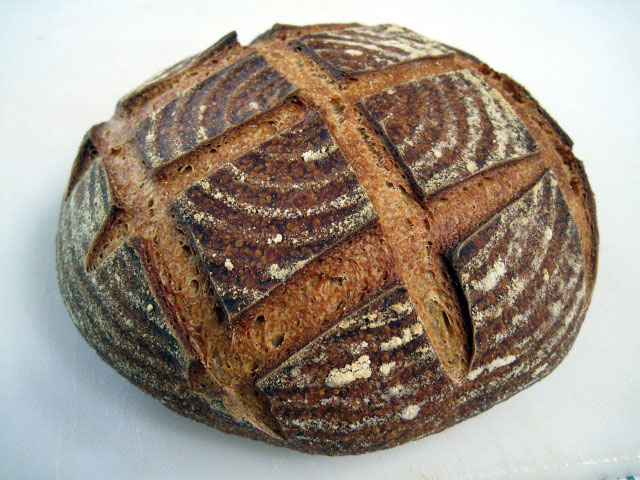 Boule scored with the blade held vertical to the loaf surface. Note the even coloration of the bloomed crust.

Variable shading of the bloomed crust confirms that the desired slow but prolonged opening of the cut during oven spring occured.

those look amazing David, now what are you using for scoring? Do I remember tomato knife or razor?

I used a Pure Komachi tomato knife. I like it.

Those are beautiful, David.  Wish there was something to practice on.  I wonder if a hard boiled egg would work...

I also use a Pure Komachi tomato knife, but sometimes I'll score a higher hydration dough and just get a jagged, uneven cut.  Not sure if that's because I was timid or didn't shape the dough tightly enough.  Probably both.

Scoring high hydration dough is a challenge, for sure. The SF SD is 65% hydration. For higher hydration doughs, wetting the blade before each cut and making the cuts with rapid strokes helps prevent the dough sticking to the blade and dragging the dough. However, with doughs above 80% hydration, I usually don't even bother. Think Nury's Light Rye or Ciabatta. The dough is usually extensible enough so the loaf doesn't burst, but sometimes it does. You just have to live with it.

Pat (proth5) talks about "mental mis en place." Before making your cuts, focus your mind and visualize your intended cutting movement. Then, do it without hesitation. If you look at some of the videos on U-Tube of professionals scoring loaves, or the videos on http://lepetitboulanger.com/  under "le scarification," you will see.

You do some amazing work.  I bet they taste even better than they look!

I still use a straight razor that I've had for thirty some years and it is kept sharp as a razor but I can only aspire to that type of result.

Thanks for your pics

This is still the best tasting version of SF Sourdough I've found. It goes through multiple builds and involves two over-night cold retardations, but it's worth it for the flavor.

The scoring technique is not a mystery. If you follow the points I outlined, you can do it.

Nice looking scoring!  I'm putting some serious thought around the question of grigne.  I just got a new blade holder and my scoring technique is taking a stutter (muscle memory is a funny thing...) but I feel on point with angle/depth/etc.  I'm happy with the three distinct colors - although I don't bake as boldly as you.

I'm wondering about temperature and steam.  At what temperature did you bake these loaves?  Did you use steam this time or a cover?

Let me know.  I'm thinking that I am going overboard on steam.  I don't think I need to eliminate it, but I think I may be enjoying that warm humidity a little too much on these cold, dry days. :>)

I used steam and no cover.

I pre-heated the oven to 500F. Just before scoring and loading, I throw a handful of ice cubes into a pre-heated metal loaf pan. Then score the loaves, load them onto a baking stone and pour a cup or so of boiling water into a pre-heated cast iron skillet. The oven is then closed and turned down to 450-460F. After 10 minutes, I removed the water recepticles. I baked for 30 minutes total and left the loaves in the turned-off oven with the door cracked for another 10 minutes.

I just re-read Hamelman on "Steam" for the umteenth time. I get more out of it each time I re-read it. He clearly recommends different steaming protocols for sourdough and straight breads.(See "Bread," pp 26-17.)I must meditate on this text. Ommmmmm .....

Yes, the book does call for different protocols.   Although it is written from the perspective of a humid climate almost sea level baker.  I've tried the "moistening' approach and just a cup of water and distinctly did not like the results.

But now, I'm thinking I have gone too far.  I'm trying a batch today and I am promising myself to pull back on the steam.  I'll see if I like it...

Thanks for the response!

What you do and how it works, Pat.

Poured less than usual into a pan on the floor of the over.  Sprayed my stone with the pressure sprayer just briefly.

Still not 100% happy, but this shows promise.

I made two bâtards today and slashed both differently. It was far from a scientific experiment. The dough was slightly over proofed (I took an extended nap) and being a high hydration dough, they were sort of flat going on the stone. But they got incredible oven spring, but one of them got bigger and "rounder" than the other (the one that looked like yours).

I don't really like making a big deal about slashing, or thinking about it too much, but you're definitely right that it makes a difference!

I'm very pleased you took it upon yourself to start this thread. Scoring is the steering wheel for shape in the final minutes and if it isn't thought out and well done, the outcome can be less than you had hoped.

I'm about to start scoring 12 loaves of the Anis Baguettes and I am appreciating your thoughtful reminder of what should be. Thank you!

OK, I'm making my New Years resolution for 2009 now. "I hereby resolve to learn how to properly slash slack baguettes."

Out of 12 loaves, only one is what I would consider somewhere near correct. The other 11 are all over the place. It's the slack 75% hydration that gets to me. I tried both blades, my faithful tomato knife and a double edge razor.

The bread looks otherwise nice and smells wonderful. It just looks like the kids down the road did the slashing! 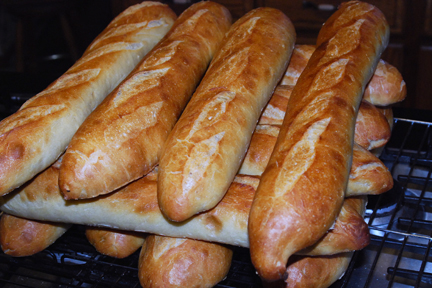 If I were in your shoes, Eric, I would be patting myself on the back, not hitting myself with a paddle! Because those baguettes look gorgeous. The crust has beautiful color and shine (covered or uncovered in the oven?), the shaping looks perfect too. It's 75% hydration, after all, and wet dough seems to like to drag when you cut it. I can't wait to see these when you get that scoring down!

Slashing slack dough is a bear. The only thing I can suggest is wet your blade and slash with a rapid motion. Also, it looks like you could have held the blade at a smaller angle to the surface of the loaf.

I've slashed some slack dough loaves recently I could not believe would ever open up, but they did beautifully. I'd upload a photo, but I can't seem to switch to the "rich text editor."

I dont think iv ever seen more picture perfect bread... absolutely beautiful. I have been trying for so long to get such beautiful cuts, however my efforts have been in vain. I have been practicing on baguettes, and have tried numerous variations from angle of cut to cutting instrument itself. My cuts in baguettes look not dissimilar from the pic eric posted above, I can never manage to form the perfect 'lip' on the cut that develops as the bread bakes.

Does the dough you are working with make such a difference to the cuts and how they develop? Eric was talking about the hydration of his dough, though I'll admit I don't know what this means (I'm relatively knew to the scene!). I'm doing my first sourdough on friday, I'm interested to see how it works out

"Hydration" refers to the proportion of water to flour in the dough. Dough with less water (therefore "lower hydration") is definitely easier to score. Maybe you should try to practice on easier doughs until you have the feel of the stroke. BTW, baguettes are a particular challenge. I'd suggest using batards scored with a single cut the length of the loaf for practice. Then move on.

I've written up a more complete (which is only relative) guide to scoring, but rather than posting it I e-mailed it to Floyd for "review." I haven't heard back from him yet. Hopefully, it will get put where it will do the most good.

However, I think most of the information is in the initial entry in this topic.

Has anyone tried the Pure Komachi 2 knives?

I love the original tomato knife, and the bread knife is stellar - or would be if it were 1-2" longer.

The series 2 look even tackier than the originals and are about half the price, so I'm wondering if the quality has changed too.  Patsy