This stollen recipe is excellent. Wonderful. I baked it three times last Christmas season and have already baked a batch this year.

But is it authentic?

I have no idea.

Let me be the first to admit that I've never had real German stollen, and the only Panettone I've had have been the ones you get at the grocery store in a cardboard box this time of year (which I love). My family has "authentic" Christmas cookie and fruitcake recipes (which I'll try to post in the next few weeks), but as far as the yeasted breads go, what I know I've gotten from books and other websites. And, as you'll see, I'm a typically shameless American about co-opting and distorting other people's traditions. Thus, even though I've never had an authentic stollen I have the gall to go out and publicize my (mis)interpretation of these kinds of traditional breads.

That disclaimer out of the way, let me repeat that this recipe is awesome. It is basically the recipe from Peter Reinhart's Bread Baker's Apprentice that I've tweaked a little.

Warm the milk to approximately 100 degrees. Mix the yeast into the milk and stir into the flour. Cover with plastic wrap and ferment for 1 hour until the sponge is very foamy. While the sponge is fermenting, combine the dried fruit and the liqueur. This time I used a package of the Sunmaid "Golden & Cherries" mix that is easy to find in stores here supplimented with a half cup of regular raisins. When the sponge is ready, combine the remaining flour, salt, sugar, and cinnamon in a large bowl. Stir in the sponge, egg, softened butter, and enough water to form a soft but not sticky dough. Stir in the dried fruit and knead in a mixer or by hand for 5 to 10 minutes.

Place the dough in an oiled bowl, cover with plastic or a damp towel, and set aside to rise for 45 minutes to an hour.

On a floured surface, shape the dough into something like a rectangle, either by rolling it out or pressing it with your hands. Place the marzipan or slivered almonds in the center of the loaf. Fold the dough closed and shape the loaf into something resembling a crescent. (Yes, my loaf does look like an internal organ. That wasn't intentional.)

Cover the loaf loosely with plastic and set it aside to rise for approximately an hour to an hour and a half. While it is rising, preheat the oven (and baking stone, if you use one) to 350 degrees. When fully risen, bake the stollen for approximately 20 minutes. Rotate it and bake it until the internal temperature is approximately 190 degrees. In my oven that took an additional 30 minutes.

Remove the stollen from the oven. While still hot, brush the top of the loaf with butter or vegetable oil and sprinkle with powdered sugar. 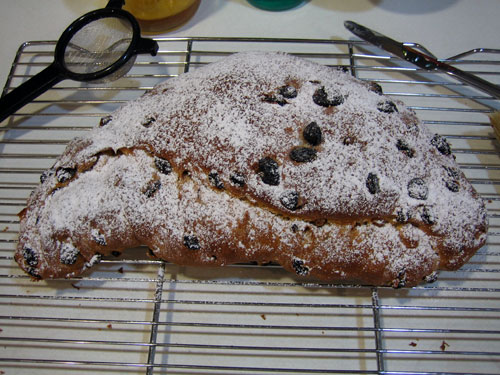 Supposedly stollen is delightful if you wrap it in paper and let it dry out for a few days. A loaf has never lasted long enough in my house for me to find out: this specimen lasted less than 24 hours. 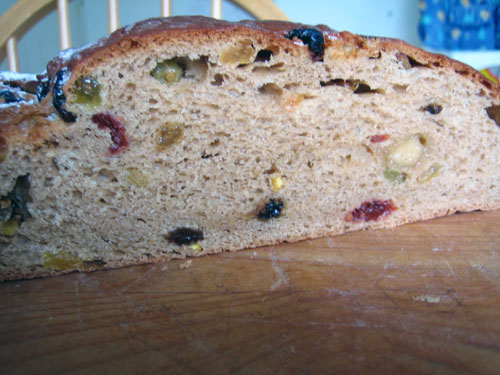 I stumbled upon Floyd's stollen recipe created Nov 20, 2005. I soaked in orange liqueour whatever dried fruits I could find in the pantry.  Now mind you, I am new to bread making;  this is the second loaf that I ever tried, and wow!  The bread came out fabulous, and tasted sooooh good!  What a confidence builder!  I feel with this community and all the online videos I've been watching the last few days, I can do this really well.

Thanks guys!  This is a great family!

i once saw stollen being made by a german baker( i think)  it was on tv. i remember printing the recipe but haven't tried it yet. this was years ago. but i remember it looked really delicious. i know 'soft and tender' better describes meat but that was my impression at the time lol.  it looked really special though if anyones interested you can find this probably in the archive at the australian msn site, freshtv was the food program.

it'd be nice if someone could make it and post a pic. im new to this site some of its a bit technical for me  but im reading the handbook at the moment and its helping heaps i'd love to be able to get the hang of the bread formula and make my own recipes! We make "My Heart's Brown Stollen" every year form Laurel's Bread Book every year. Again, don't know how 'true' to stollen it is, but we love it.

if you guys want authentic Stollen, (which is a designated bread and must contain certain ingredients to be called Dresdenerstollen) you can order it online now.(shipping and handling is quite steep to ship to the US) However, if you want to know if you’re on the right track, just read the ingredients on the back. The ingredients aren’t in graduated quantities, meaning yeast might be listed as the first ingredient, which is obviously not the heaviest ingredient used. YES, stollen containing almonds IS traditional, however marzipan isn’t. Although it is a popular style, just not the original.

the ingredients on the back of the box are as follows: