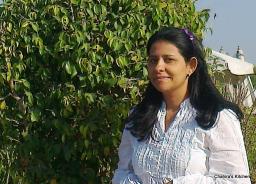 Fanoos Ramadan or Ramadan's Lamp or lantern is one of the Egyptian traditions however it is known in many other Islamic countries now. The tradition started in the year 358 AH (Hijri) on the 15th of Ramadan when the Fatimi leader El Mo'ez Le Deen Allah enered Egypt, and the Egyptians recieved him with lamps and torches. And since then the Fanoos has been known as one of the main symbols of Ramadan and most of the people own it and light it in Ramadan, especially children. There has been also varios songs related to Ramadan talking about the Fanoos and the Mesaharaty - some one who wakes people up at night in order to eat before fasting. The tradition fanoos contained a candle in it, while today's ones have different shapes and using battries and LED's instead of candles 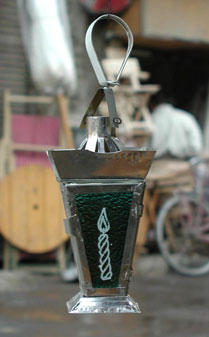 During the competition , that i told you about it, i tried to make " fanoos" from " la pate morte" or the dead dough,i really do not like the idea of decorative stuff using eatable ingredients, so i made a small one, i do not like to consume a lot of flour and oil , just to decorate non eatable and decorative dish because some people die from hunger, anyway, here you are the pics of my fanoos,

In this picture, i put a real candle, the necklace also from the pate morte" actually it is not a necklace", muslims use it in praying and mention allah"I saw it also in the hands of christian nans, they use  it too, i saw it when i was in my christian nans school " la mere de dieu".

I use my fanoos to decorate our dinning  room table during the whole month.