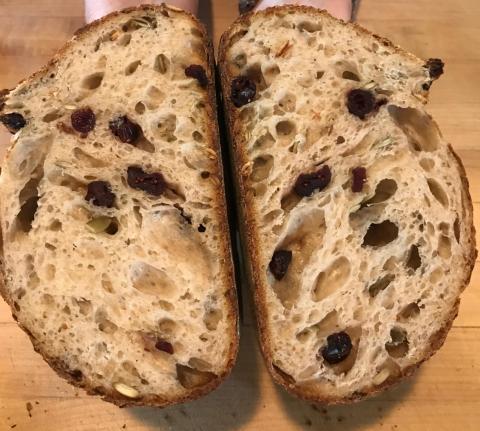 Since the baguette brigade has moved to blogging about bread I thought I should follow along. I have been making this bread for quite some time. It was one of the first videos that Trevor Wilson posted. He calls for pecans but I always use pepitas instead. I make it more often than any other bread because it is great for morning toast and is a good vehicle for Nutella.

Other than mixing baguettes and pizza dough by hand, I have switched to my Bosch mixer for the rest of my breads. My weekly whole wheat Approachable loaves that go through the spin cycle for ten or more minutes until shiny. I am doing some machine learning to replicate hand mixing of an open crumb sourdough loaf by doing a short mix with a pause then a bassinage to get the hydration up and letting the mixer incorporate the add ins. I have switched to a stiff starter(60%) recently and am liking the results. It is a little more effort to feed and knead but it does seem to add some lift to the dough.

I put the water and the stiff starter in the mixer and use the cookie paddles to break up and mix until frothy. Switch to the dough hook and add the flour until just combined. Fermentolyse for 30 minutes then add the salt and mix at speed two while adding the last 25 grams of water. The mixer does a great job of incorporating the added water in less than two minutes after a brief pause I dump in the add ins and mix on low until barely mixed in. Sometimes I leave it in the mixing bowl for 30 minutes and then dump it out and coil fold it into shape with another coil fold or two the rest of the way.

Retard the shaped loaf overnight and bake straight from the fridge on a stone with a graniteware cover for 20 minutes and then remove the lid and finish baking until done. 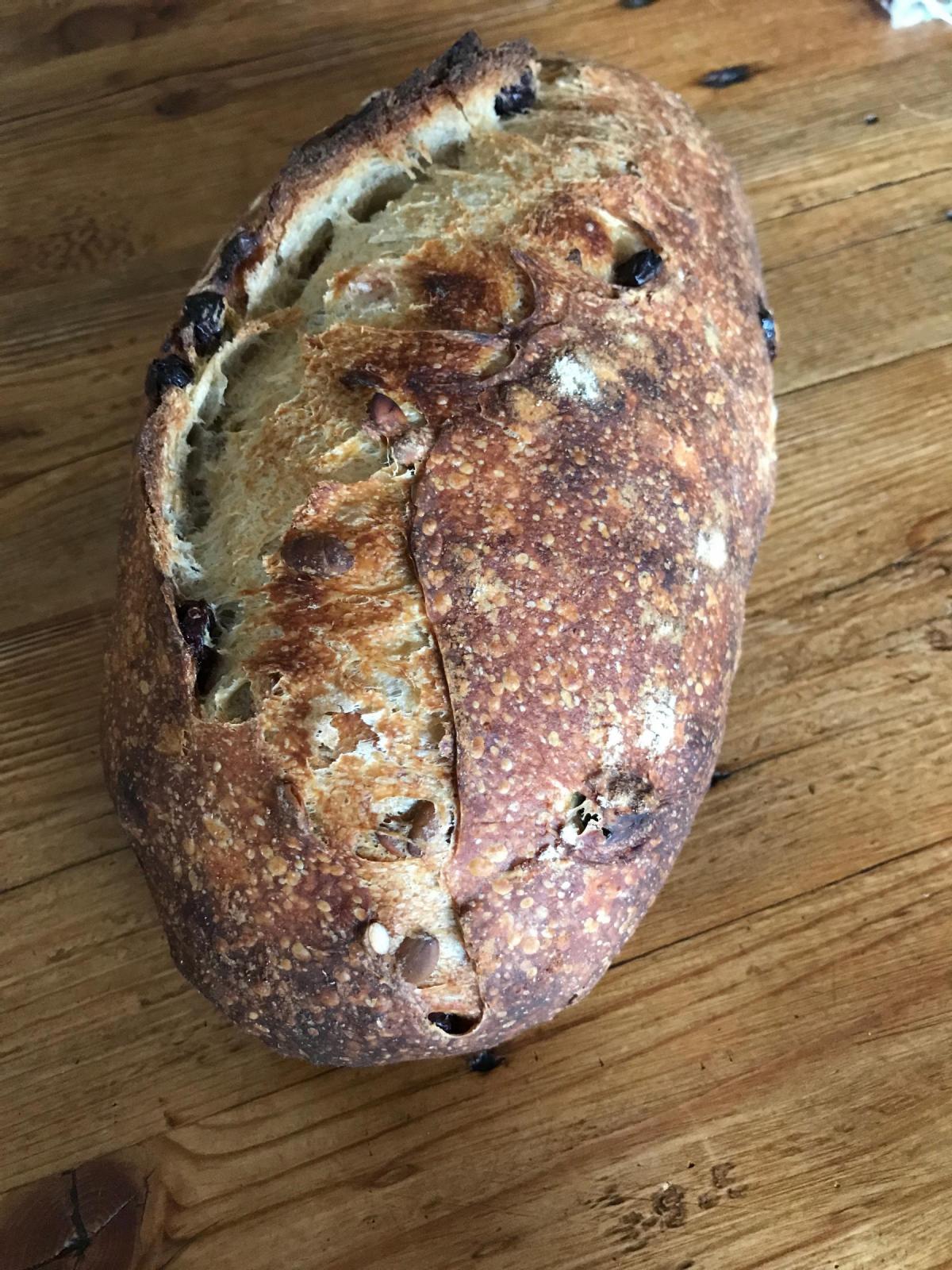 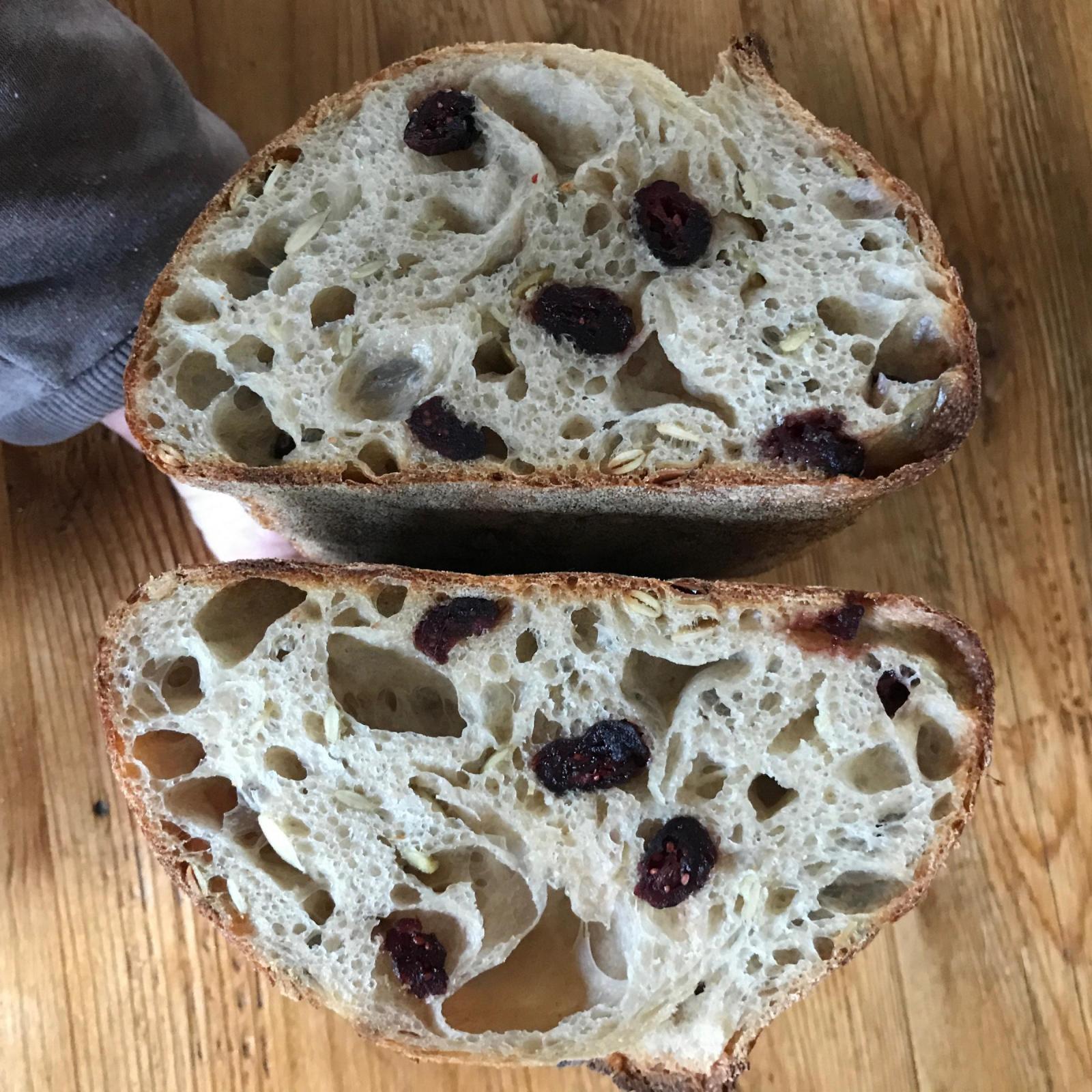 You can get an open crumb with a mixer if you don't overdo it. A thorough mix will lead to a tighter softer crumb but the holes allow for maximum Nutella without leaking through.

Good looking bread and giant open crumb as a visual for sure.  Although too giant for my pedestrian wants.  Personal problem is that I like to put mice and small children in my sandwiches, and I just know that they'll slip through those open crumb holes.

Now I'm becoming a "less is more" convert on the mixing front, abeit by hand,  thanks to the likes of folks like you.  I enjoy reading write-ups like this that don't include a mix equating to, as you so eloquently write, the spin cycle on my washing machine.  Other than for something like ciabatta, I just (yet) don't see the value in those intensive mixes, and I wonder whether bakeries not adhering to the Wonder or Chorleywood style breads ever do those for more than a very few minutes.

Don't neglect to put the lime in the coconut and mix it all up...

with the first cut and get a nice looking IG slice. The rest of the slices didn't have room for rodents or a place where the baker sleeps. Holes in bread are like a box of chocolate, as Forrest would say. A mixer is a nice tool but it takes some practice to get proficient at it like. Just like the snowplow truck I have been operating this week after 18 inches of snow fell on us a few days ago. Not a job you want to do by hand with a shovel. So when I make multiple loaves I prefer a machina.

Great looking loaf Don, I like the bloom with your S score, very attractive.  That crumb is excellent open enough without being too open for spreads.  Pepitas, is that a US name for pumpkin seeds?  I've always just heard of them called pumpkin seeds in Canada and only started to hear pepitas once I started baking bread and reading up on recipes.

or make it your signature or someone might claim it. I think pepitas is the spanish word for punkin seeds it souds better too. I used the sprouted ones I found at Costco.