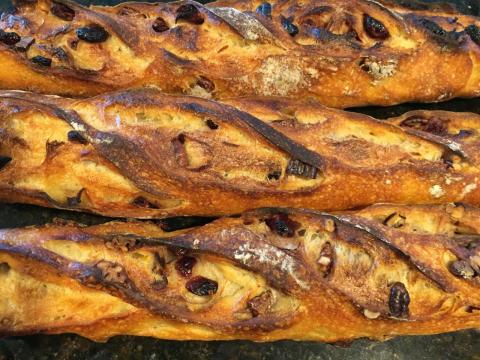 A second run at Danni's semolina cranberry/wild rice levain.  With some obvious changes afoot compared to my first attempt.  The wild rice didn't float my boat so I 86'ed it.  The quick and dirty on this version's mods:

These were begging to be baked dark, and who am I to argue?  Although I adore semolina based breads, the orange peel and cranberry combination, while delicious, overwhelmed it.  May try using a whole grain next time instead.

Gerhard suggested the orange peel, and he was right on the money, as it adds a distinct flavor that marries well with the cranberry.

If this were a production bread, the cost of it would be fairly high as the inclusions here are quite costly compared to a FWS version.

I was pleased that the scores went well, as sometimes these types of baguettes, laden with fruit and nuts, will get oven bloom, but not a decent enough ear.  I also find that, in general, these breads in baguette form are less likely to display an open crumb for me.

A modestly intermittent problem is the even distribution of inclusions.  As I mix by hand, the add-ins don't arrive until the first Letter Fold, and as often as not wind up being unevenly spread across the length and breadth of the dough.

A thin crust with a distinctive snap/crack to the bite.  Just my style. They look delicious Alan, wonderful bake.  I also find inclusions make it difficult to get an open crumb at least so far with my batards/boules, I haven’t tried any inclusions in baguettes yet.  I love the dark bake and the ears are very impressive.

As you might know, I'm more in the minimalist camp when it comes to sticking close to home - meaning FWS with the occasional seeded bread.  However I keep getting swayed every so often by trying out combos inspired by what I see here on TFL.  And these combos also make some great morning toast.

made a distinct difference in the flavor profile.  As soon as I read your recent comment on the prior bake, I recalled seeing that pairing elsewhere.

Wow, those look so good.

We have a bakery here that does a cranberry pistachio bread. It is indeed expensive but I never regret the purchase.

But I recently baked one of Abel SIerra's breads with pistachios and was disappointed.  The nuts perhaps should have been halved in size, and I think they became soggy in the mix.  But maybe my application of them was wrong and they may have benefited from first toasting.  I'd never thought to use cranberry until Danni posted hers recently.

Of course the cost of ingredients for home baking is relatively insignificant and we and family & friends are the primary "customers"/consumers.  But it does occur to me that a bakery can't just put one of these on a shelf next to a baguette de tradition and charge the same.

I love those flavour inclusions, great flavour affiliates. A baguette for any time of day!

Indeed.  To me, baggies in general are for any time of day or night. But these, as with a few others I've baked, are truly good for whatever-o'clock.  Freshly baked, aromatic and crispy with butter, late afternoon or evening with a soft cheese.  And of course as morning toast.

The real hidden star is the orange peel, suggested by Gerhard on the prior bake.

How was the orange peel prepped?  Was it just zest or finely chopped peel?

is to have an orange!  I used a citrus zester exactly like the one on this page.  Once zested, I then chopped the thin strips up fairly fine.  From the photo it looks as though that zest was done with a much deeper peel than I do, as I usually have very little pith as part of the peel.