I seldom make boules, so I decided I need to brush off some of the rust on that skill and also had long wanted to make a bread with sundried tomatoes, so here is my take on this.

I did an overnight build of the levain starting with fridge cold water and an hour in the fridge taking it out to a cool room temperature at bedtime.

The final dough was mixed including the salt again with fridge cold water and placed in the fridge for 1 hour taking it out to a cool room temperature at bedtime.

In the morning the levain was just past peak and was immediately mixed into the saltolysed dough, Rubaud mixing was employed for 5 minutes to ensure the levain was well mixed and some gluten was starting to be developed.

Bulk Fermentation was done at 82ºF for the duration.

After a 30 mins rest a strong letter fold on the counter was done.  30 g dough was removed, folding it several times to get a good ball shape and placed in the aliquot jar.  I have posted about this elsewhere so refer to that post if you are interested in learning more.

After another 30 mins rest a lamination was employed.  Use the lamination to add the inclusions in three parts to ensure that they are evenly spread throughout the crumb when baked.

Another 3 coil folds were employed at 30-45 mins intervals until a good windowpane.

Bulk fermentation continued at 82ºF until the aliquot jar showed a 60% rise.  The dough was then immediately shaped and placed into a banneton and placed into the fridge at 2ºC overnight.

The next morning, oven was pre-heated at 500ºF and the steam set up was done for steam baking.  For boules I use my steam set up instead of my dutch oven which is oval.

After 1 hour of pre-heating my dough was removed from the fridge and immediately flipped onto a parchment lined peel.  I brushed off the rice flour and scored the boule trying a spiral for the first time.  I usually brush water on liberally at this point but in the fuss of doing a spiral score for the first time I forgot.

Load the dough ensuring that the steam set up is going and bake at 450ºF for 20 mins.  Remove the steam set up and then drop the temperature to 420ºF turning on convection and bake for another 20-25 mins turning halfway through until crust is a mahogany colour and baked through.

My adding inclusions during lamination video

My shaping a boule video 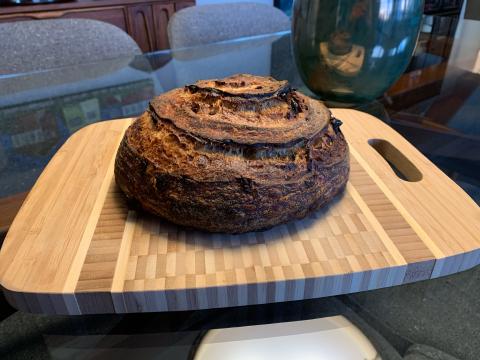 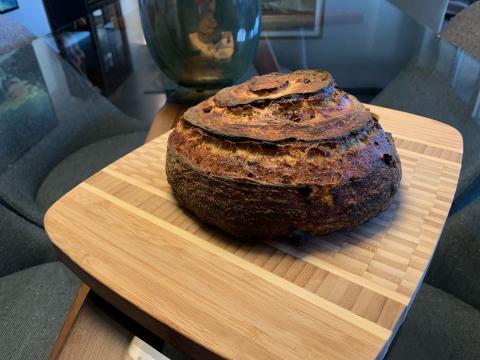 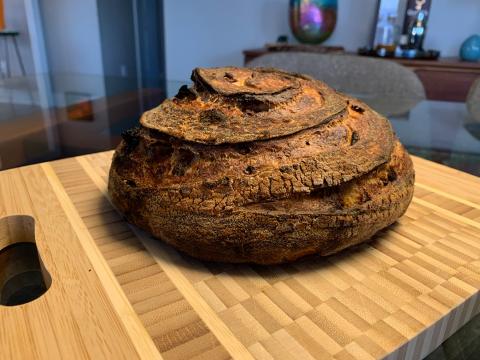 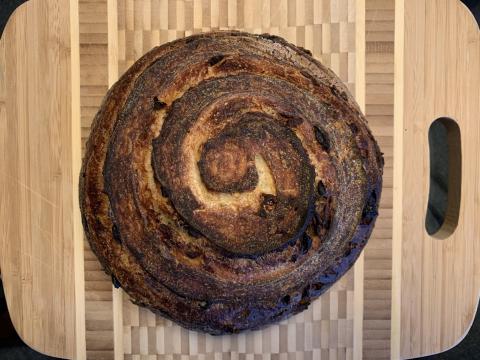 I didn’t achieve good oven spring.  I suspect I degassed the dough too much during shaping.  I am obviously rusty at shaping a boule.  Hope the crumb isn’t too bad as a result.

where you'd have to actively try to make a bad bread.  I know that you've put a lot of work into honing your skills and keeping very focused on the end game.  And there really is nothing that beats measured practice.  But then sometimes even those folks, as with you, need to have golden hands.

Thanks Alan, your comments mean a lot.  I know you’re the same way, always looking to improve on what you bake so you can relate.  You would have to try to bake bad bread.  You will recall my earliest attempts at baguettes not too long ago, they were pretty bad for various reasons.  However, we do learn so much from those bakes.  You have contributed a lot to my current ability to bake good bread so thanks for your help and for pushing me.  I keep thinking that so much of what I now know about baking is from baking baguettes.  Anyone who wants to up their bread baking should work on baguettes to hone their craft.

with the exception of the lavender.  Like Einkorn for grains, Lavender is not one of my favorite herbs.  But, as a bread libertarian I say to each their own.  Love the bold bake and the circular scoring too!

Bet the crumb was just as nice!

Thank you sir, fortunately I cannot detect much in the way of lavender flavour from this herbs de Provence that I have, because I’m not super fond of lavender.

Enjoy your day dabrownman and thanks for your comments on my bake.

The fragrance and flavor are probably every bit as good as the appearance.  Nicely done!

Thanks so much Paul, the flavour didn’t disappoint.  As I expected I was overly aggressive shaping this poor boule and really degassed it tightening the crumb.  Oh well, good lesson learned.

OK so don’t follow my shaping video to a T, stop while you’re ahead even if shaping is fun.  I overdid it and should have stopped when I initially did using the bench scraper, but no I had to continue with my hand shaping and degassed the poor thing.  The resulting crumb is tighter than I wanted which Alison lessened the oven spring.  Good lessen learned hopefully I will stop when it is done and not go on next time. 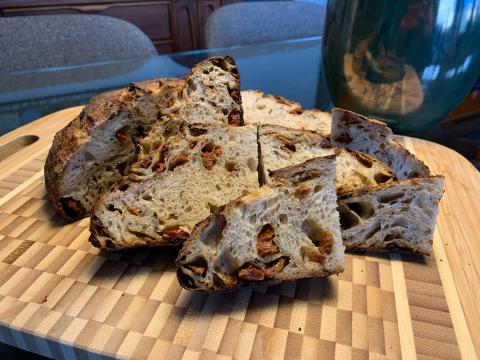 Looks delicious to me, and looks like you got good dispersement of the add-ins throughout the crumb.  Lovely!

Thanks so much Leigh. I do like using lamination for add ins because it can distribute the inclusions quite evenly throughout.

Thanks Frank tightish crumb not withstanding it was a very tasty bread. 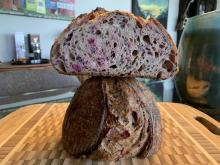