These are my first go at an all white flour 10% protein, in this case from Quebec, that is sourdough and no commercial yeast.  After the good results I had with the sesame semolina sourdough baguettes without commercial yeast I decided I needed to give it a go again but with the Quebec white flour.  These are essentially Abel’s baguettes au levain without the commercial yeast and hydration increased to 70% during bassinage and finally encrusted with poppy seeds.  So I’ll just call them Yorkville Baguettes since that is the neighborhood that I live in 😎

These were done in my now usual fashion with very little intervention, so only Rubaud mixing when adding the salt to ensure that it is well mixed.  There were no slap and folds done.  I did my usual two coil folds, in between telemedicine appointments (don’t tell my patients) so not quite at the usual 50 mins intervals.  Bulk fermentation was monitored with an aliquot jar once again ending when the jar showed a 20% rise.  The dough was put into a 2ºC fridge for bulk cold retard and stayed there for a bit more than 24 hours.

The following day I did a pre-shape into loose cylinders followed by a 25 mins bench remembering that the last time I used this flour it was extremely extensible.  Shaping when pretty well for me and these were each then dampened on a wet towel and “rolled” on a cookie tray with poppy seeds.  They were transferred to my floured couche seam side up thinking that the weight of the dough would help press the poppy seeds firmly into the dough to help attach them.  They were given a 40 min bench rest.  With 10 mins left to the bench rest the oven was turned on to pre-heat at 500ºF.  At the 40 min mark the baguettes were put back into the fridge to firm up and stayed there for 40 mins.

Overnight levain build with cold filtered water, refrigerate levain and then take out of fridge before bedtime.

In the morning dissolve diastatic malt and levain in water.  Then add flour and mix to shaggy mass.  Rest 20 mins then add salt and gradually add bassinage water, do Rubaud kneading for 4-5 mins until dough is smooth.

Remove approximate 40 g of dough and set up your aliquot jar.  How to use an aliquot jar.

Ferment at 82ºF, after 50 mins do coil folds, then after another 50 mins do another coil fold.  Once the aliquot jar shows a 20% rise the dough is placed into the fridge until the following day.

With 10 mins left of bench rest the oven is started 500ºF to preheat.  When the 40 mins of bench rest is completed the shaped baguettes are placed in a bag and returned to the refrigerator for 30-40 mins to chill to make scoring easier.  Once this time is over the baguettes are scored and immediately placed on the baking steel and boiling water is added to the cast iron skillet.  The Sylvia towel with boiling water was placed in the oven 30 mins prior to baking time.

The oven temperature is jacked up to 525ºF to get the burners to activate immediately and then once activated dropped to 480ºF.  The baguettes are baked with steam for 13 mins.  The steam equipment is removed venting the oven of steam.  The oven is left at 480ºF but convection is turned on and the baguettes bake for 10 mins rotating them halfway.  The oven temperature is then dropped to 450ºF and the baguettes rotated again if needed and baked for another 3 mins to achieve a rich colour crust. 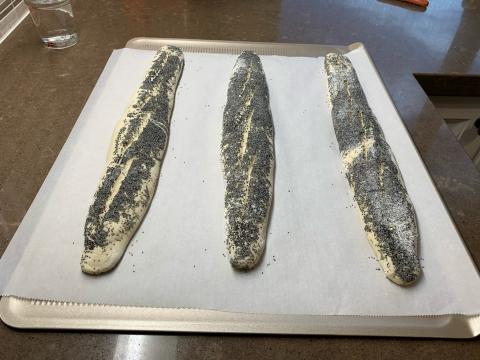 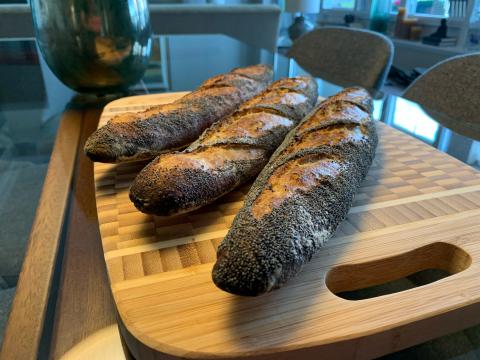 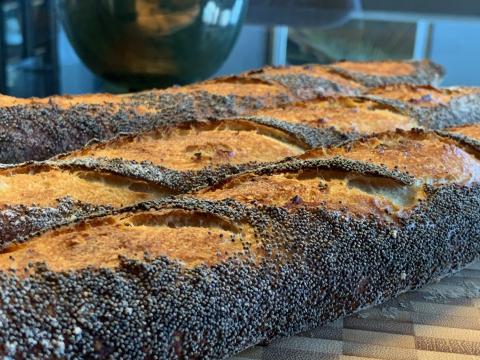 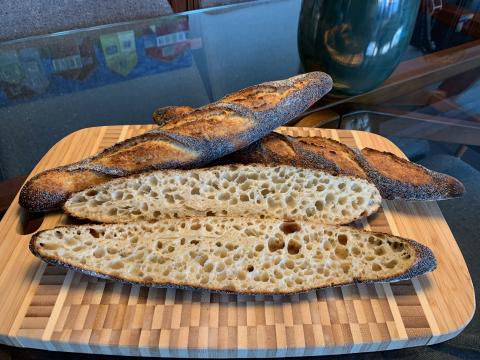 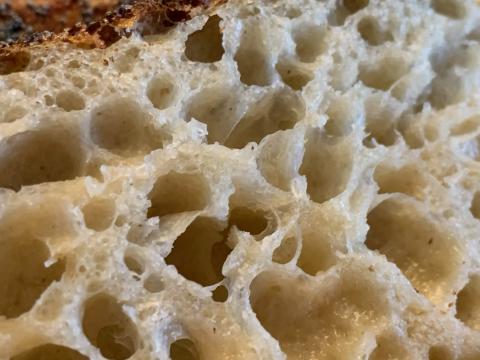 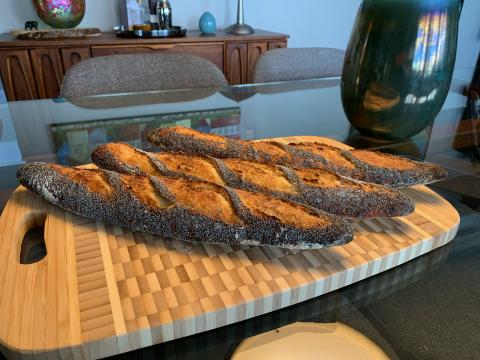 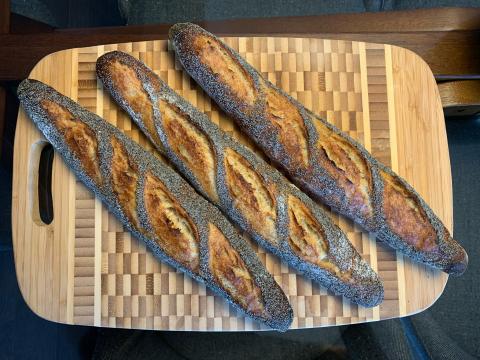 I forgot to say that these are my best baguettes that I have made to date, I’m so proud of them.  My baguettes have come a long way over the course of the summer til now.  The crust despite being sourdough is thin, crisp and oh so delicious with the poppy seeds.  The crumb has a great flavour with nary a hint of acid, so little that I cannot say that it is sour at all but it does have the complexity that the levain brings.  The crumb was also nice and open.  For some reason I do better open crumb with baguettes than my other breads, no idea why or how.  This and the sesame semolina baguettes are my #1 and #2 favourites now.

I love the crumb.  I would like to give this a shot. Do you feel the low protein flour makes it much easier to handle them?  Where did you find the flour?

In my short experience with baguettes and with what most, but not all bakers, in the CB have found, generally low protein flour has helped with less elasticity and I think open crumb.  Highly elastic dough springs back too much when rolling to stretch so less elastic has been better for me.  I was able to find this particular flour at a organic food shop and I’ve quite pleased with it.  Please post back if you give it a try Glenn.  Making this dough is so low intervention so much less work than other sourdoughs I’ve made.  The shaping and scoring is the challenge but with enough practice one can get a good enough result.  I’ve now lost count but I think these might be around my 20th set so with 3 or so per set after 60 pre-shapings and shapings I’m finally getting the hang of it.  Not to say that I am consistent yet, only time will tell.

These look awesome Benny.  All your hard work has paid off.  I wish I had a couple of them here to eat for dinner :).  Perfect crumb and shaping.

Thanks so much Ian.  I’m so surprised that everything actually came together with this bake.  There were always a couple of things I wasn’t happy with in all my previous baguettes, but with this set, I have no disappointments.

These Baggies are beautiful,  That crumb is to die for!

That is some happy baking....

Thanks so much dabrownman, I appreciate your comments.

These look amazing! Thanks for sharing a video on how to shape them. I’ve been learning to bake bread over the last few months and baguettes are my long term goal. Your video has helped make it a lot less intimidating. Hopefully soon I’ll give it a try myself :)

I started baking sourdough early last summer.  I never really gave too much thought to baking baguettes because I’d read that they were so difficult.  With some prodding from the baguette crew on this site I finally took the plunge early this summer I think.  Then Dan started the Baguette Community Bake and there I learned everything I now know about baguette making.  We all learned so much from baking baguettes as a group and we continue to learn and share.  If you would like to dip your toes and start baking baguettes, join us in the Community Bake.  We are still going but at a somewhat slower pace.  It is a friendly place there.

Thanks for your comments on my baguettes and on my videos.  I hoped that the videos might help people who are interested in making baguettes, it is what I did to make these exact baguettes as they were the ones in production for the videos.

Glenn, sorry if I've asked this before but are you in Canada?  I only ask because everything I look at is also 4 g protein per 30 g of flour that I see in our grocery stores.  Great that you were able to find some 10% protein flour.  I look forward to your upcoming bake.

Yes, just down the road from you in the bush just east of Cambridge.

I bought this flour specifically for baguettes. I really struggle with shaping, they resist stretching with high protein flour ( I usually use RobinHood unbleached)

La Milanaise All Purpose flour is what I have found that works well for me with good extensibility.  The website says it is 11.6% protein but each of the two bags I've bought so far are labelled with 6 G protein per 60 g flour so 10%.  Another option that I haven't been able to find recently is the PC brand all purpose flour, it is actually made from US wheat and also had 10% protein.

I can't believe that crumb!! I don't think I've ever seen a crumb that nice on a baguette. I wish I could taste it.

Hi Ilene, thanks for your comments on my baguettes.  I’m quite happy with the crumb, not too much to complain about with this bake.  I can’t believe I’d never coated any of my breads with poppy seeds before as they are so tasty.

Seeds make everything better in my opinion!

looks good but the crumb is a bit dense. The taste is excellent. Maybe need to let the final proof go a bit longer? 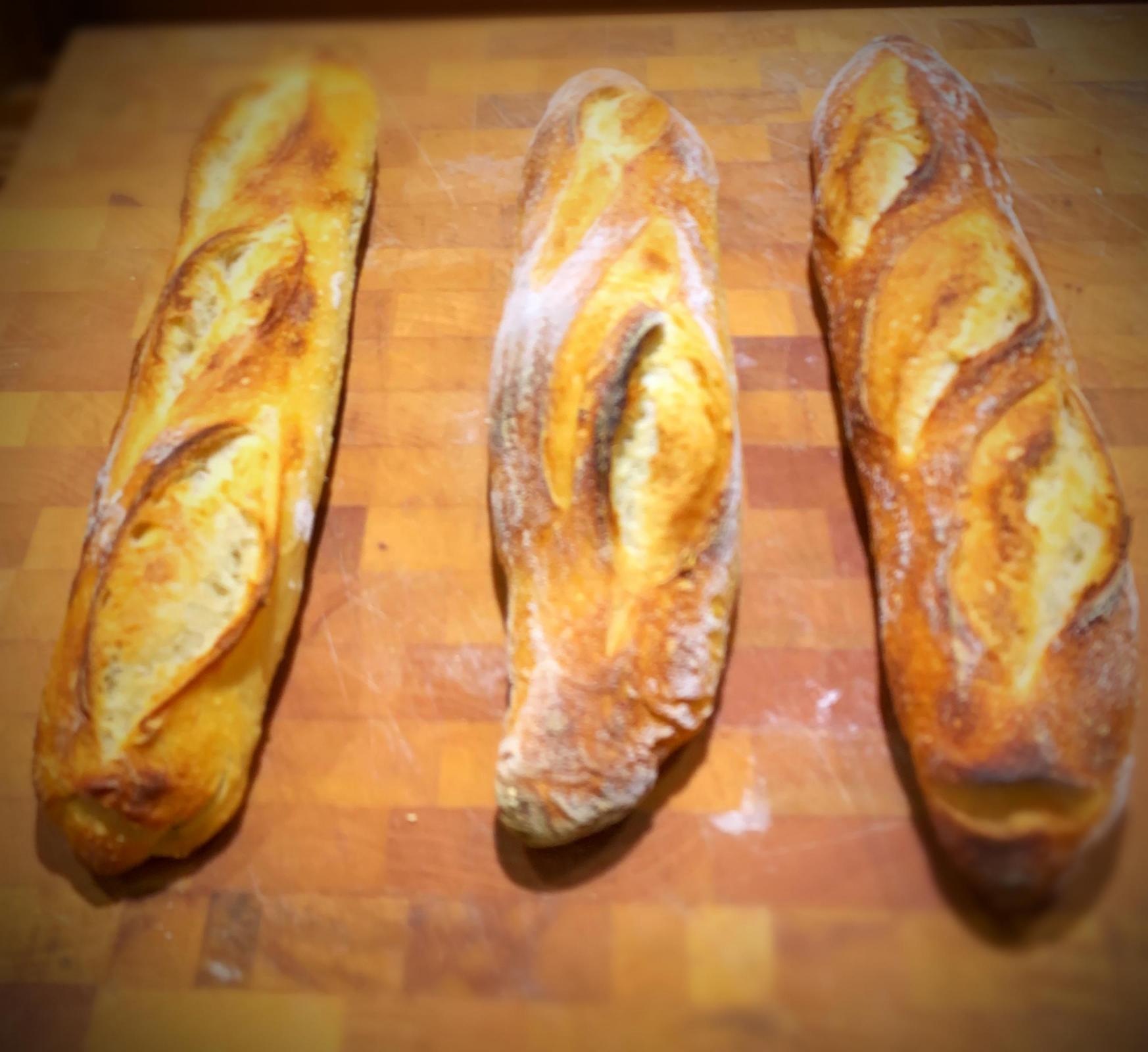 Glenn good work on the scoring and shaping especially of the outside pair. Do you have a photo of the crumb?