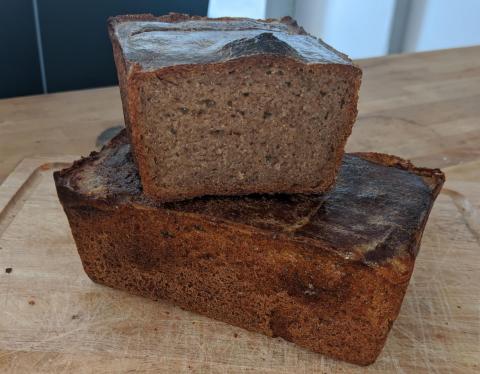 I've been baking sourdough bread for the last few months (ever since yeast completely disappeared from the shops for a while here in the UK), having never baked any bread before. I have produced some frisbees a couple of times and a few times made gorgeous loafs.

But I only just now started trying rye. Coming from Russia, it's something I miss here (although I've never been a big fan of rye breads, I guess you don't know what you like until you can't have it!). So I decided to bake it myself.

I previously got some of my baking equipment from https://scotlandthebread.org/, and already back then I got their Bread Matters rye starter - it's originally from Russia, so I couldn't say no to that. Now I also got two small bread tins from them, which although pricey are of excellent quality and feel nice and heavy in your hand.

Interestingly, finding dark rye flour is a little challenging here, but I managed to get some. And made some bread!

(Well, I am skipping one failed attempt with, I suspect, very overproofed bread: huge hole on the top, dense mass on the bottom).

I followed a Russian recipe from https://pechemdoma.com/100-rzhanoj-obdirnoj-xleb.html

Translation of the recipe:

I mixed the preferment in the evening and left overnight on the kitchen table, for around 10 hours. Surprisingly, it didn't look any different in the morning, so I assumed it was too cold during the night and left it another 2-3 hours in the morning, until it started bubbling and smelled nice and fermented.

Then simply mixed in all dough ingredients (I needed 35 g extra water to make the dough feel what I thought was right - having never done this before) and left in the bowl for ~2 hours for bulk fermentation, then divided in two and put the dough into the tins, tightly packing it in to avoid empty spaces. Left it to proof until around 50% increase, which took 4.5 hours.

Baked in a preheated to the max oven without steam. Just before baking, dissolved a little wheat flour in water to make a very liquid dough, and carefully covered the tops of the loafs. After 10-15 mins turned down the oven to ~200°C and baked for a total of 1 hour. While the bread was baking, I dissolved a little starch (I had corn starch) in water and heated it until it thickened. Immediately after taking bread out, covered the top with a little of starch gel for a nice shiny top.

Cooled down in the tins for 10-15 mins, then took bread out and cooled on a wire rack. When still warm, but not hot, wrapped in a tea towel and left overnight, to soften the crust and equilibrate water throughout the bread.

And lo and behold, next day it's a beautiful dark rye bread. It's a little moist, with a delicious rye flavour and a sour tang. 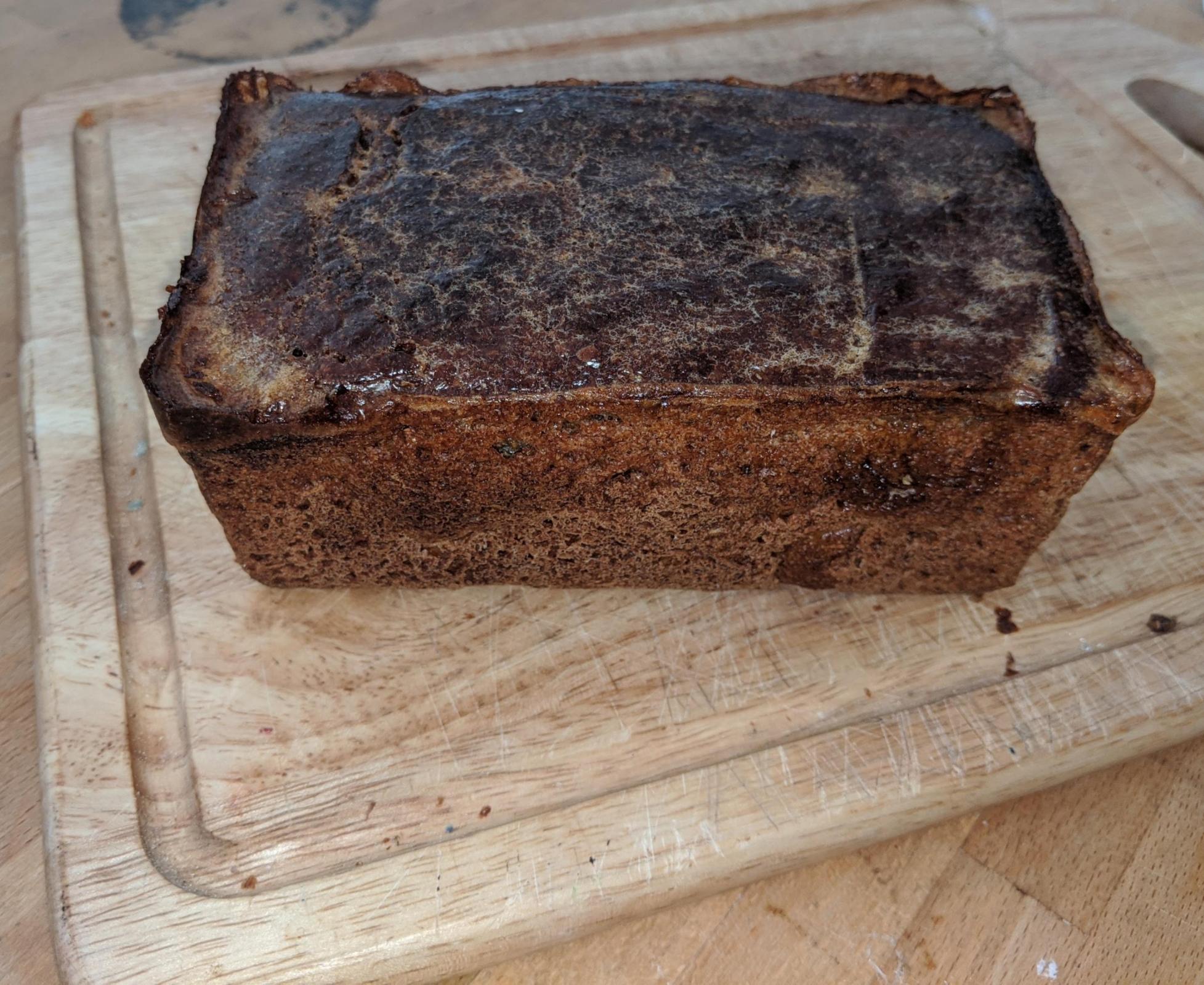 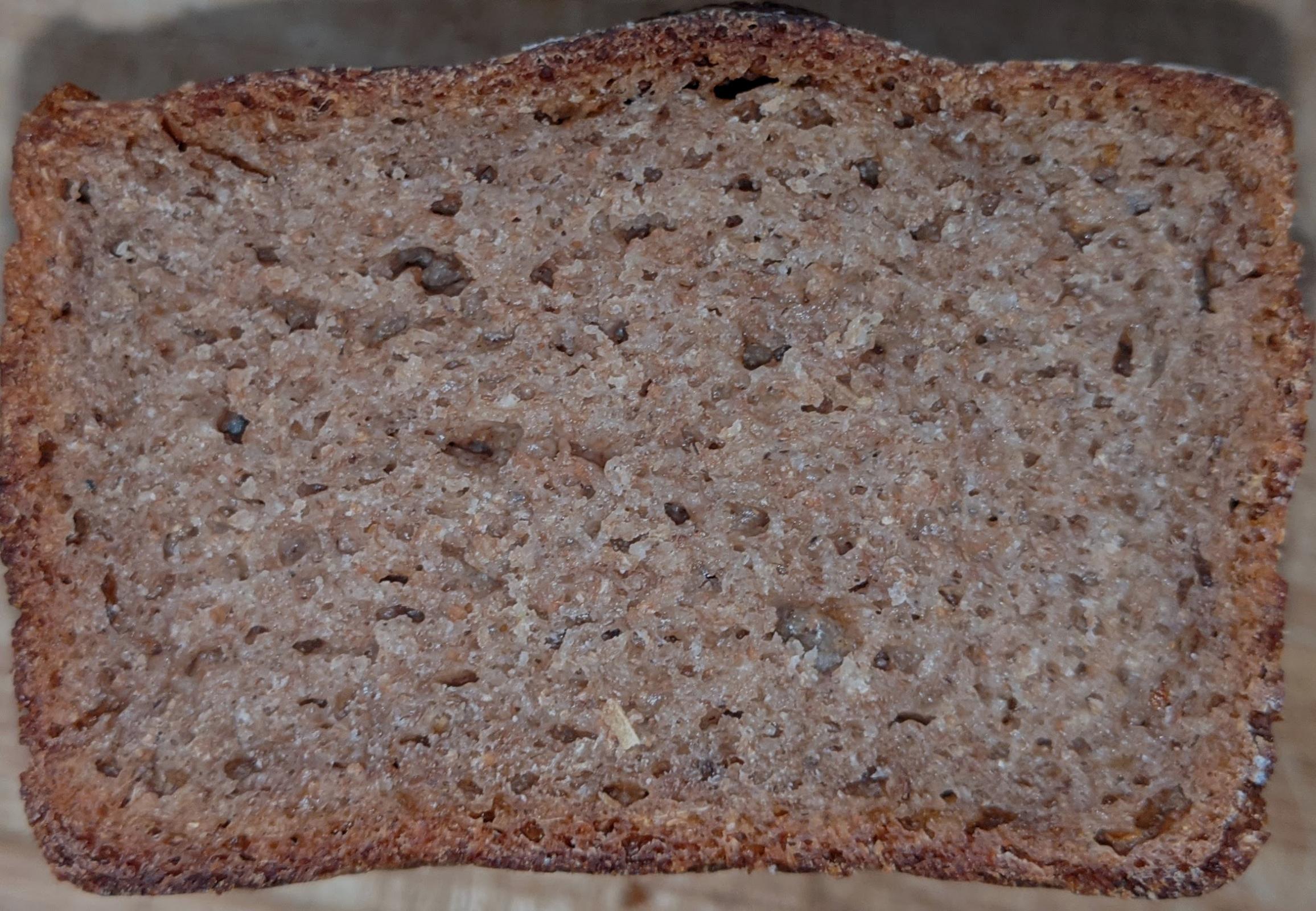 That's a delicious looking rye bread Ilya, would be tasty with a nice pastrami and good cheese. Nicely done!

Thank you, I was really pleased with the outcome with such a simple recipe! I've already repeated it with added sunflower and pumpkin seeds, and omitted the bulk. Also delicious, and more Nordic rather than Russian vibe.

I love rye bread with salted herring and onions! But it's really versatile.

Sounds more like a Danish rugbrot bread with the sunflower and pumpkin seeds. It's one of my favourite rye breads and yes, definitely made to go with pickled and salted herring, onions, smoked salmon, cheese. Your Russian palate definitely has some serious Nordic tastes!

That is exactly what I was trying to say. Seeds add a Nordic vibe. 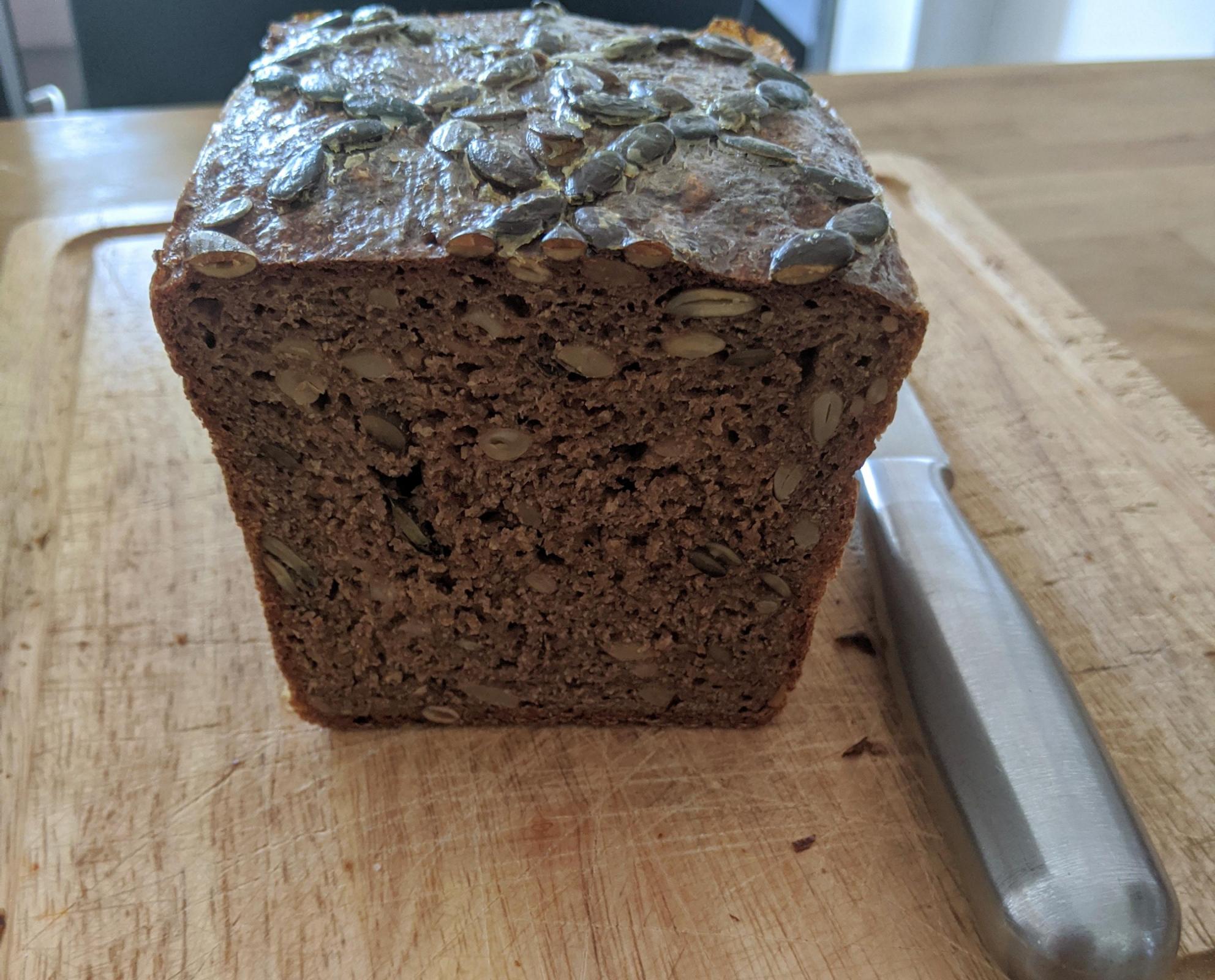 Have you ever made the famous Borodinsky rye bread?  If so, what's your favorite formula for that?

There are several Borodinsky formulas on this web site.

That was my ultimate goal with the rye bread! Being in the UK it's a challenge to source the Red Rye Malt required for Borodinsky. I tried to make it following http://www.thefreshloaf.com/node/37222/borodinsky-supreme-old-school-100-rye and substituted the malt with just barley malt extract. In addition I made a couple mistakes during the process, so while the result is of course delicious (sourdough, and 100% rye, can't really not be tasty!), it's not very authentic/correct, and not as amazing

Next time I am visiting Russia I'll buy some Red Rye Malt, and then I hope I can make the real Borodinsky!

There are different recipes also available in Russian, e.g. on YouTube https://www.youtube.com/watch?v=pNMmsXjVfrg (I like recipes from this lady, I think she used to work in breadmaking maybe? or at least studied the Russian bread baking books) which I could try, being a Russian speaker, and compare. But the process is very similar everywhere, with I think mainly variation in relative size of scalding/preferment.

I think you can get rye berries in UK and make your own rye malt.

after malted and dried, I think they are soft enough to "grind" in a coffee grinder or blender.

search this web site for the post. I think it was in the past 12 months.

Thank you, I saw instructions too (http://www.thefreshloaf.com/node/27954/making-red-rye-malt), but I assumed it needed to be ground in a mill! I don't actually even have a coffee grinder, but do have a small blender.

Also, as far as I understand preparation of the original Red Rye Malt has an additional step of fermentation with no air access at ~60° for 4 days, which is not covered there, and would be challenging to perform at home. Although of course malt prepared with that method seems more authentic than any replacement I could find here.