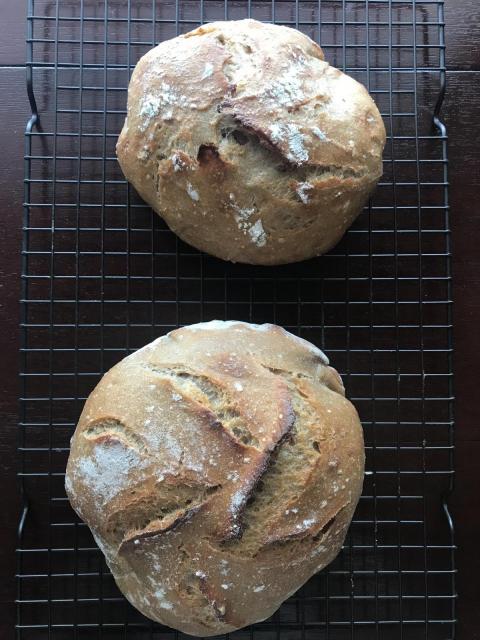 The other day I decided to finally try my hand at a sourdough boule recipe. Amazingly to me, one of them was edible and dare I say pretty darn good. The other one was, well, let's just say that it was instructive. ;)

The first thing I did was to collect some healthy starter from a local flour mill. I also bought a bag of spelt flour from them. Now, what recipe to try? I decided to go with the mill's basic Sourdough Bread Formula.

My only deviation was that I used a mix of flours: about 250 grams of AP, about 166 grams Spelt, about 84 grams Rye. Everything was fine (seemed ok to this newbie at least!) until the end of the dough process. The instructions say that you can reserve 25 grams of water to mix with the salt and add this after the autolyse phase. Well the dough seemed 'right' to me after the autolyse phase - then I added my 25 grams of salt water. Things became pretty wet and slimy at that point. Didn't like that but pushed ahead to the bulk fermentation and stretch and folds phase.

I stretched and folded the dough as per the instructions and a youtube video I found which demonstrated a stretch and fold. I suppose I did ok. Too bad Mr. Reinhart wasn't there to give pointers. :)

The dough was not slimy anymore but still pretty wet or 'goopy'. Again I have no idea of how normal this is. It definitely did not have that beautiful perfect pillow look I have so often seen in photos and videos. I pressed ahead to the shaping phase.

I have a 2.75 qt Staub La Coquette dutch oven which I planned on using for the baking phase- with no notion of how much dough can safely fit in a 2.75 dutch oven, I decided to play it safe and split the dough in half, forming 2 boules. Alas I have only 1 banneton however - so I also prepared a ceramic serving bowl with a piece of quilting cotton inside. I don't have a linen towel.  Ok, now the dough got tipped out onto a wooden cutting board, cut in half, each half receiving a 'rough shaping' - well as sticky and wet as things were it was pretty rough all right. Frankly, I'm glad Mr. Reinhart wasn't there to see this! Into the refrigerator both went for a long cold slumber.

Time to bake! I preheated the oven + the dutch oven, and took my boules out of the refrigerator. I put a piece of parchment paper down and tipped my banneton over. Uh oh. The dough was totally stuck. I cursed and set it aside, reaching instead for the cotton lined serving bowl one. It mercifully peeled from the fabric and plopped onto the paper. I slashed it with my lame and dropped it into the dutch oven, and off it went to bake. Then I returned to the problem dough mess stuck to my banneton. Well in the end I just had to pull and scrape the whole thing out. I tried to reshape but found the mess of dough too wet and crazy. I decided to sprinkle flour on it. Then I started moving it around on my cutting board with my dough scraper, trying to mix in the extra flour (wasn't really working btw) and trying to reshape the thing into something round and coherent. I set this aside on its parchment sheet and waited for the first boule to finish baking.

I took the first boule out and magically found that it was golden and round - success! I tapped the bottom, sounded hollow to me, so I set it aside to cool and I put the second boule in the dutch oven to bake.

At the appointed time I removed the second boule. It also looked golden and round, however it was noticeably smaller than the first loaf. I suspected things but figured I should let both cool and then cut open to analyze. I went ahead and left them overnight before cutting into them. 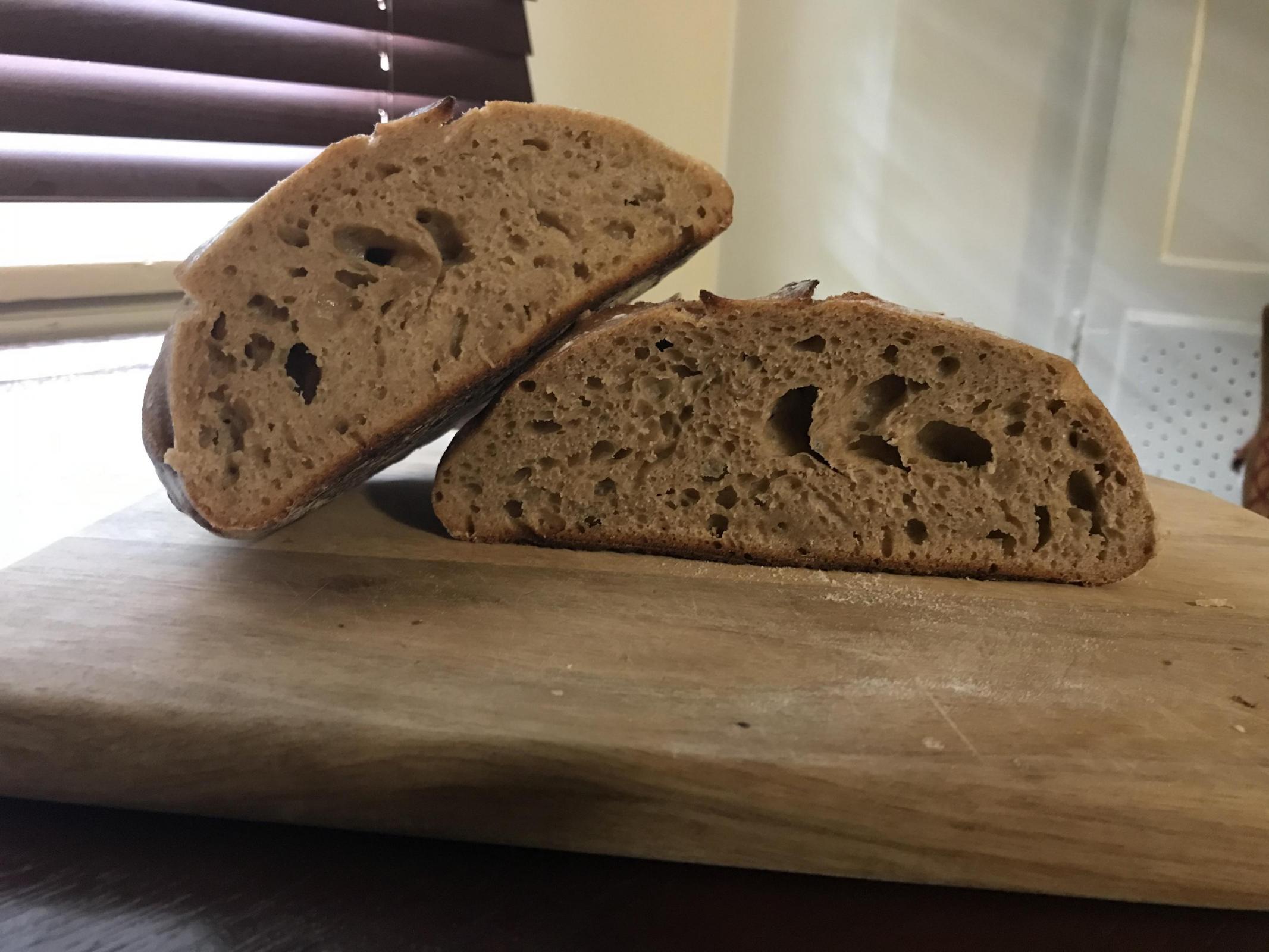 Moist but obviously done, yummy, mild, pleasant tang. I can see the air pockets have gelatinized (I hear this is a good thing) and overall I am impressed that I managed this little boule. I eat it plain and as toast. 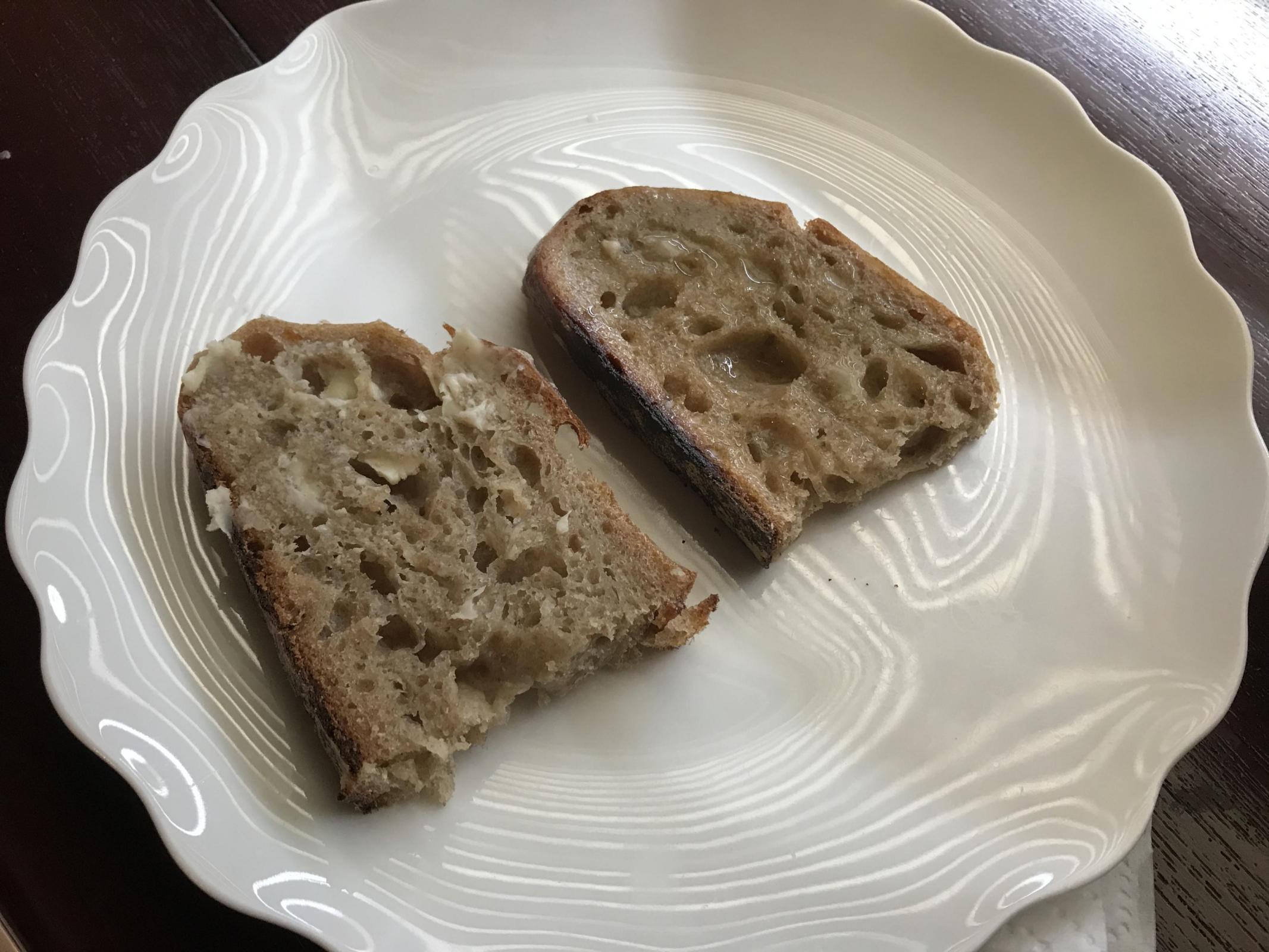 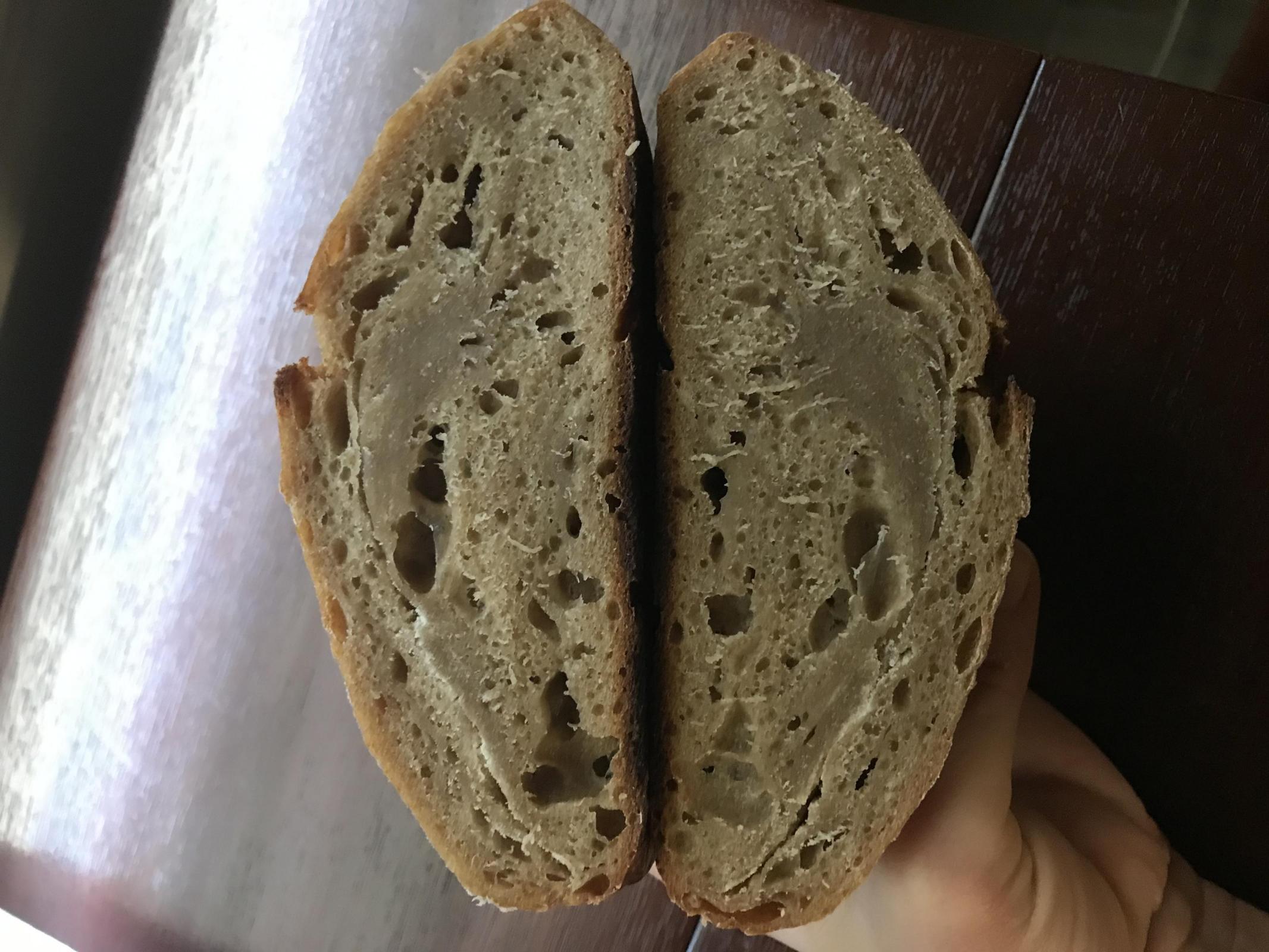 This is the one that had to be scrapped out of the banneton, sprinkled with flour (you can see the white line of unincorporated flour in the photo) and desperately reshaped. This whole process seems to have collapsed the structure built overnight in the refrigerator, hence smaller boule. You can see how collapsed and gummy it is. Sad. :(

However I see how important it is for the shaped dough to not get torn and roughed up before baking and I'm wondering how I can prevent this in the future. Did I not put enough flour in my banneton? Maybe I should just switch to bowls and fabric.

All in all, a very informative experience as well as a rewarding one. I did end up with one delicious, albeit smallish boule. Next time I will try not dividing the dough to get a more 'normal' sized boule.

excellent explanation and photos.   this is really helpful for others trying to avoid this- the one that worked out looks amazing!!!   thanks for putting this together.  hopefully a bread genius will provide a helpful solutuion.

If this is your first sourdough experience, you did amazingly!!

Now, I'm no bread genius here, but I have been able to long ferment my dough successfully without using any bannetons or linen towels. You can use any shape container or bowl of your choice - all you have to do is spray the inside lightly with oil and dust some rice flour on all sides of the container. (If you use a linen cloth or towel, there is no need to oil, of course.) I've used both white and brown rice flour, and there is no difference. You just plop your final shaped dough seam side up into the container - just as you would with a banneton. I think some people use a mixture of regular wheat flour and rice flour, but I have been using 100% rice flour with 100% release every time this way. I hope you'll give it a try!

Thank you for your kind words and suggestions! I will look into rice flour.