I’ve made this once before and wanted to give it another go since I still have some Einkorn and wanted to inch up the % of it in the bake.  Being aware of the difficulty baking with Einkorn, I just increased the amount from about 10% to 13.5%.  The dough handled just fine.

Over the course of bulk fermentation at 77ºF did a letterfold, then lamination and then 3 coil folds.

When volume increased 33% or so shaped and placed in banneton.  This was approximately 5 -5.5 hours.  Continuing to watch fermentation via the aliquot jar left on counter until 40% rise then placed in fridge 2ºC for 20 hours.  (Had to work)

Strangely both times I have baked this I have found the browning of the crust to take quite a long time and to be uneven.  Has anyone else had this issue with Einkorn?  I wonder if I’ve over proofed a bit causing the uneven browning, but I’ve never had that before with other sourdoughs that I have baked, it is strange. 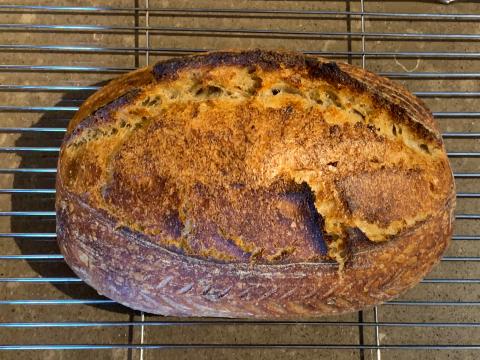 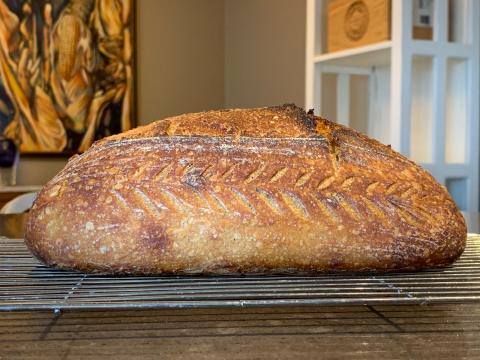 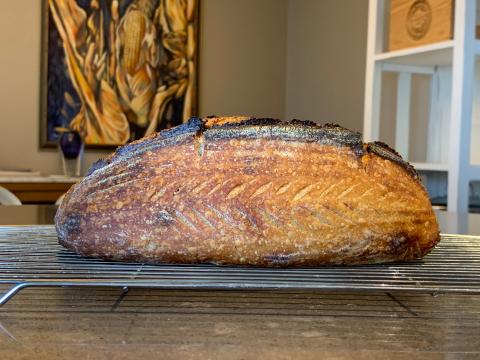 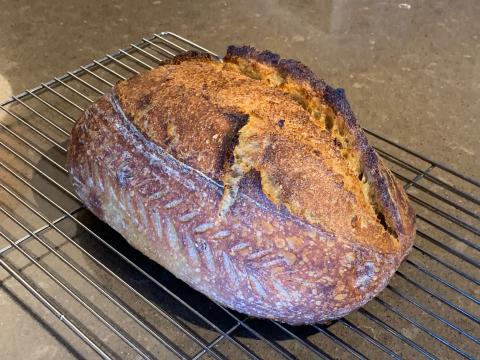 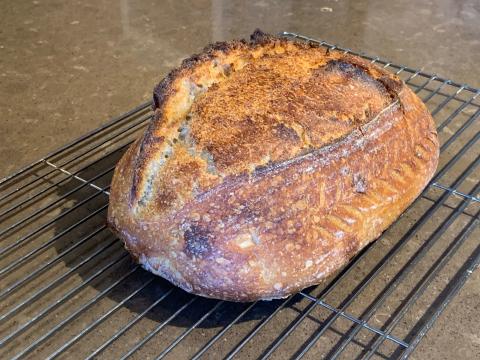 Thanks, I won’t be able to post a crumb shot until tomorrow because I’m bringing this loaf to visit family who we haven’t seen in more than six months.

Beautiful! I love the scoring. Lucky in laws. Don’t forget to post the crumb shot before they eat it all!

I've used einkorn up to 20% with no probs. It is tasty, and my second favourite ancient grain after emmer.

Next time I’ll have to try upping the einkorn then. Thanks Lance.

Here’s the crumb. What do you think, a bit over or underproofed? 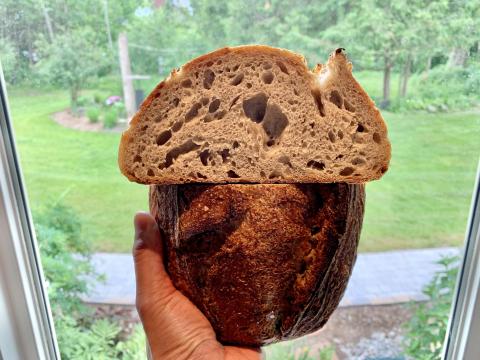 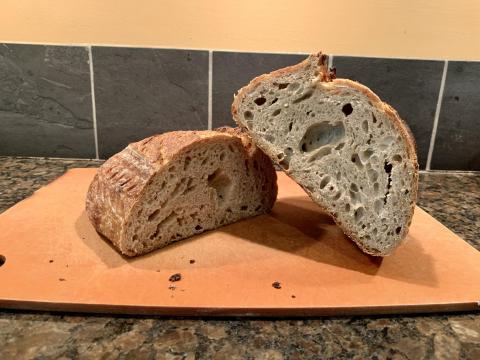 You've got the ear and spring so it shouldn't be overproofed. However, I think the crumb is still pretty good. More importantly, the combo of red fife and einkorn definitely sounds tasty!

Thanks Elsie.  Yes perhaps I can let the bulk fermentation go a bit further next time, I was hoping for more oven spring than it got and a bit more open crumb.  But it was sure tasty.

It looks really good to me.  Nice ear

Thank you, I was quite happy with the ear for sure, just hoping for a bit less dense crumb in places.

If you add in the levain, it looks like you have about 33% wholegrain flour. At that level I don't think you're going to get a really open crumb.

Try reducing your red fife or pass it through a kitchen sieve, just to get rid of some of the big bits of bran.

I haven’t yet tried using a sieve to remove the larger bits of bran, that is a good thought, thanks Lance.