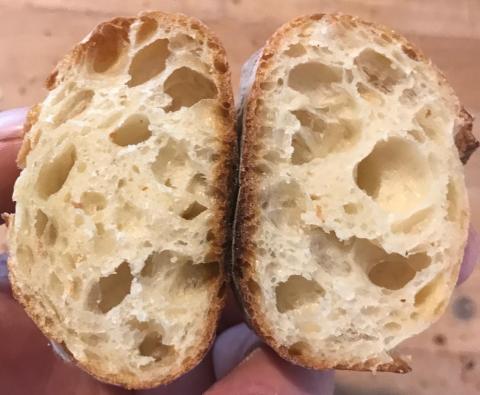 It is a said that much of what we learn in fly fishing, is history we haven't read and I think that applies to baking bread as well. Lance AKA Albacore clued me into the use of fava bean flour in french baguettes and in my reading of the archives of TFL I have found mention of it's use by members of the Baguette Brigade Alfanso, KenDalm and also Abelbreadgallery.

I bought a bag of BRM garbanzo/fava flour which I understand is used for gluten free baking, which by the way I know nothing about. I added 2% to my usual Bouabsa recipe to test it's merits of providing a more open crumb with a little less elasticity. Right off the top the dough seemed silkier and more easy to handle. The rest of the bake went as normal after an overnight in the fridge the dough had grown some and woke up quickly so the rest after dividing and the final proof were shorter. The dough was a little stickier than usual but still manageable.

I wanted to bake them darker but my stone was too hot from the previous breads and the bottoms were beginning to get too dark. They were light as a feather and the crumb softer and was airer but in a different way than usual. The taste was a little different from the fava bean flour addition but enjoyable. I didn't notice anymore whiteness to the crumb as was advertised which is okay by me. I like the yellowish tint I get from Wheat Montana AP.

More fava flour to be used in future bakes because I have a whole bag of it and at 2% of the flour total it will last awhile. I am going to try adding some in my next sourdough loaf. 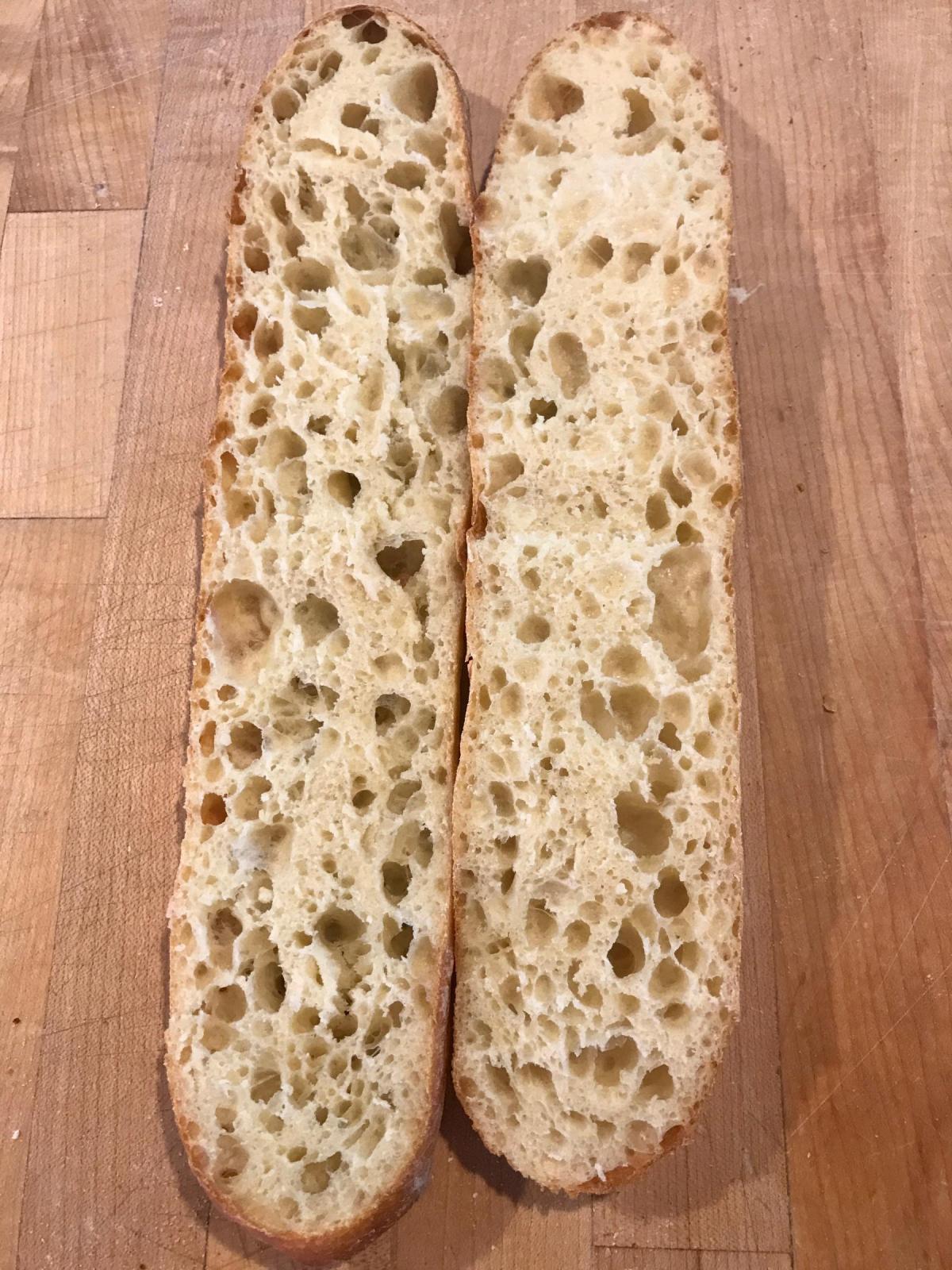 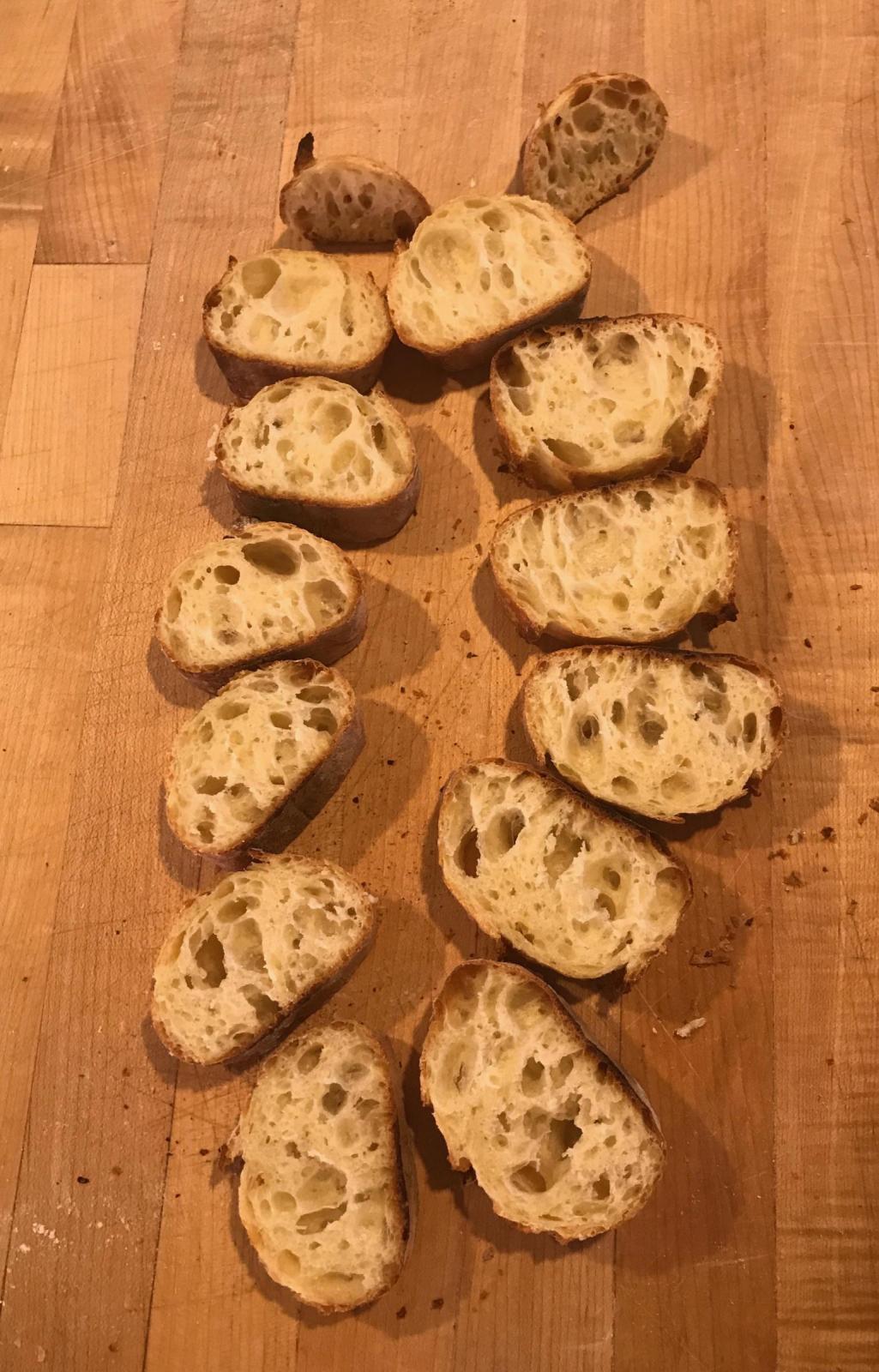 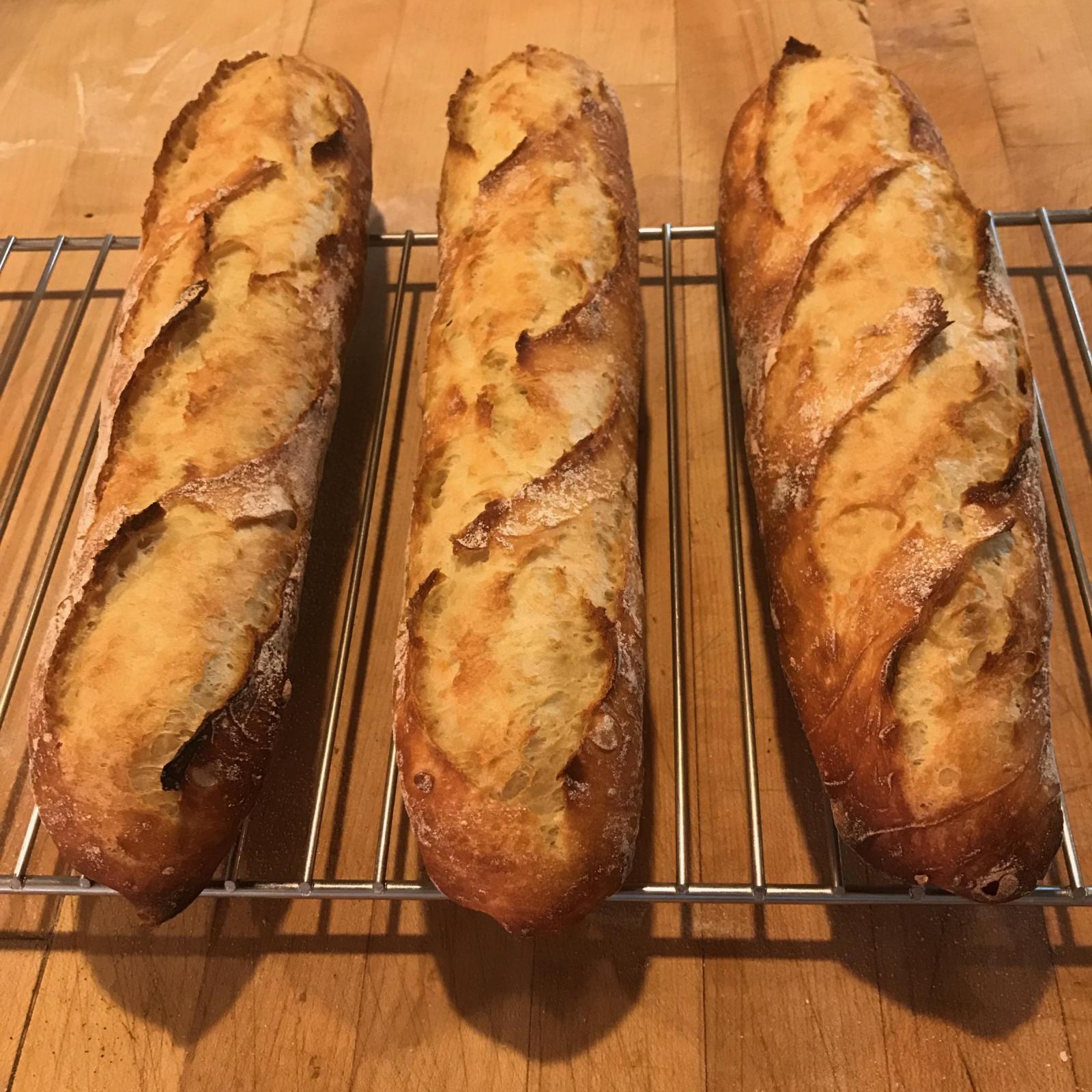 Thanks for viewing this edition of the Alfansos' baton brigade revival to encourage others to try their hand at it. Your other breads will improve by working with the king of breads.

across the years on TFL, I've read a number of comments that said they could tell just by looking at the bread whose it was, given to consistence of style and look.  And you've got it too. Somewhat like a signature.  Way better than my miserable penmanship!

I learned about the garbanzo/fava thing from kendalm and only employed it a very few times.  Abel is the real deal among we "few" who post baguettes here.  That is how he makes his living.  The rest of us are just differing levels of good amateurs.  I'm certain you've noticed how the Bouabsas have that certain glisten to the crumb.  They are things of beauty.  Unfortunately, those committed to avoid a bread like this, either by dietary restrictions or personal aversion to venture anywhere near an all AP flour concoction, will never learn the wonders of this bread.

It's a great open crumb here too.  Any more and the bread might be classified as ciabatta!

Your "alfanso style" is the most recognizable one here. I think the style factor sometimes comes down to ambient lighting. My breads would look different in your kitchen. My focus has always been to achieve an open crumb first with this bread and the fava factor was an interesting experiment. I know now that the french definitions of a baguette, limit the use of fava flour to 2% but I might double it next time to see where it goes. Besides half of it is garbanzo. I am fortunate to have an oven that seals well and keeps the steam in which is half the battle with this bread. Perhaps it's the yeast or from a fair amount of repetition but I find that these are easier to get right than a sourdough loaf.

I messed with the scale size in the top photos to get more looks from the DO crowd so hopefully others will join in.

Those look amazing, love the crumb and the bloom.

When you are ready to try these I would recommend this recipe. The dough goes together easily with very little hands on time and is still chilled when it is time to work with it.

These have a signature visual - I think I mentioned before they look a bit like dmsnyder's style.  Who knows why each person's looks the they way they do. As the fava - I'd recommend getting bobs pure fava bean and you try pushing it above 2% but I think you'll find it gets rather like Einhorn by that point.  For whatever reason the tiniest amount really changes things.  Even more so is the addition of the tiniest pinch of soy flour btw.  The best thing to do is just order the real deal T65 from lepicerie (imho).  You'll find with the french flour that the dough is quite delicate and most importantly tastes out-of-this-world.

So glad you documented this and great crumb !

I guess we all have a signature look about our breads without really trying to create one. I saw that you were cooking with fire once again or did you get an electric? I have to say I liked the Fava/G effect it had on the dough and the crumb. I will keep an eye out for the BRMFF and the soy. I like to purchase as local as possible but if I ever make it to France I will be bringing some flour home. You might enjoy this story from The New Yorker about french flour.baking-bread-in-lyon

Can't wait to see your what your new oven produces.

I'm surprised that article is so new - there's avid of this exact article here which has been one of my favs - it's from 10 years ago.  The best part is when Bob basically sneezes on the bread - https://youtu.be/_2A-Wj4cG0A

The video has a happier ending than the story. I can't explain the time differential between the two. Let us know if you get your hands on some of that flour.

Unfortunately I can't stand the aroma and taste of garbanzo flour (though I love the beans), so I will content myself with admiring your baguettes, rather than attempt my own.

Just to point out that garbanzo beans are chick peas, not favas/broad beans and chick pea flour is often called gram flour or, as an asian name, besan. I don't think gram flour would have the same effect in dough as fava.

But I do admit that fava flour has a pretty strong aroma too!

and thanks for bringing it to my attention originally. You have quite a few tricks up your sleeve. It seems an insignificant amount at 10 gr and the difference was a little bit more than subtle. I didn't notice any odor, however my sense of smell is not the greatest. I thought the crust lacked a certain crispness but other factors may have been involved. I guess I will go full fava and try to order the pure thing to satisfy my curiosity.

And great looking baggies! Who knows, perhaps there is some enzymatic activity from the garbanzo fraction as well?

I think Danny managed to get hold of some fava beans, but I don't know where from. One train of thought I had was that favas are broad beans and you can easily buy broad beans, at least in the in the UK - fresh in season or frozen. So perhaps it would be feasible to dry broad beans (at low temp) and grind? Long winded, I know, but might be interesting for a trial.